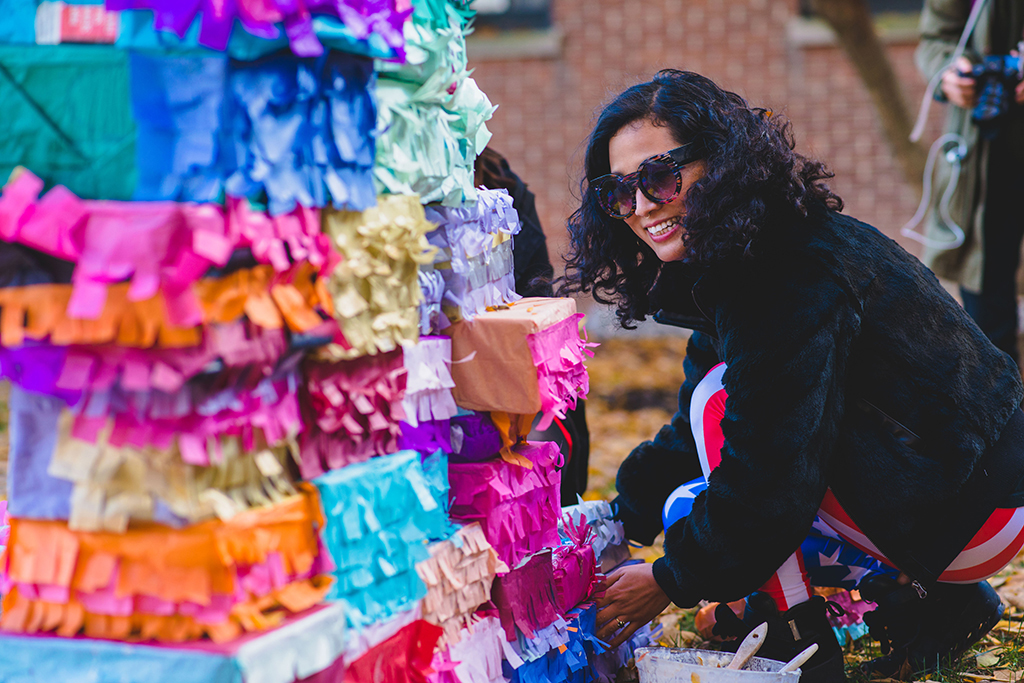 How does sewing stitch together questions of labor, immigration, politics and identity? Aram Han Sifuentes investigates this question in her work inspired by her experience as a young immigrant from South Korea. Coming with her parents to the United States in 1992, her family gave up their former professions—Sifuentes’ mother was a professional artist—to work in dry-cleaning shops. Laboring long hours as a child, Sifuentes helped her mother mend clothing, an experience that sparked her interest in the practice of sewing and the politics of immigrant labor. 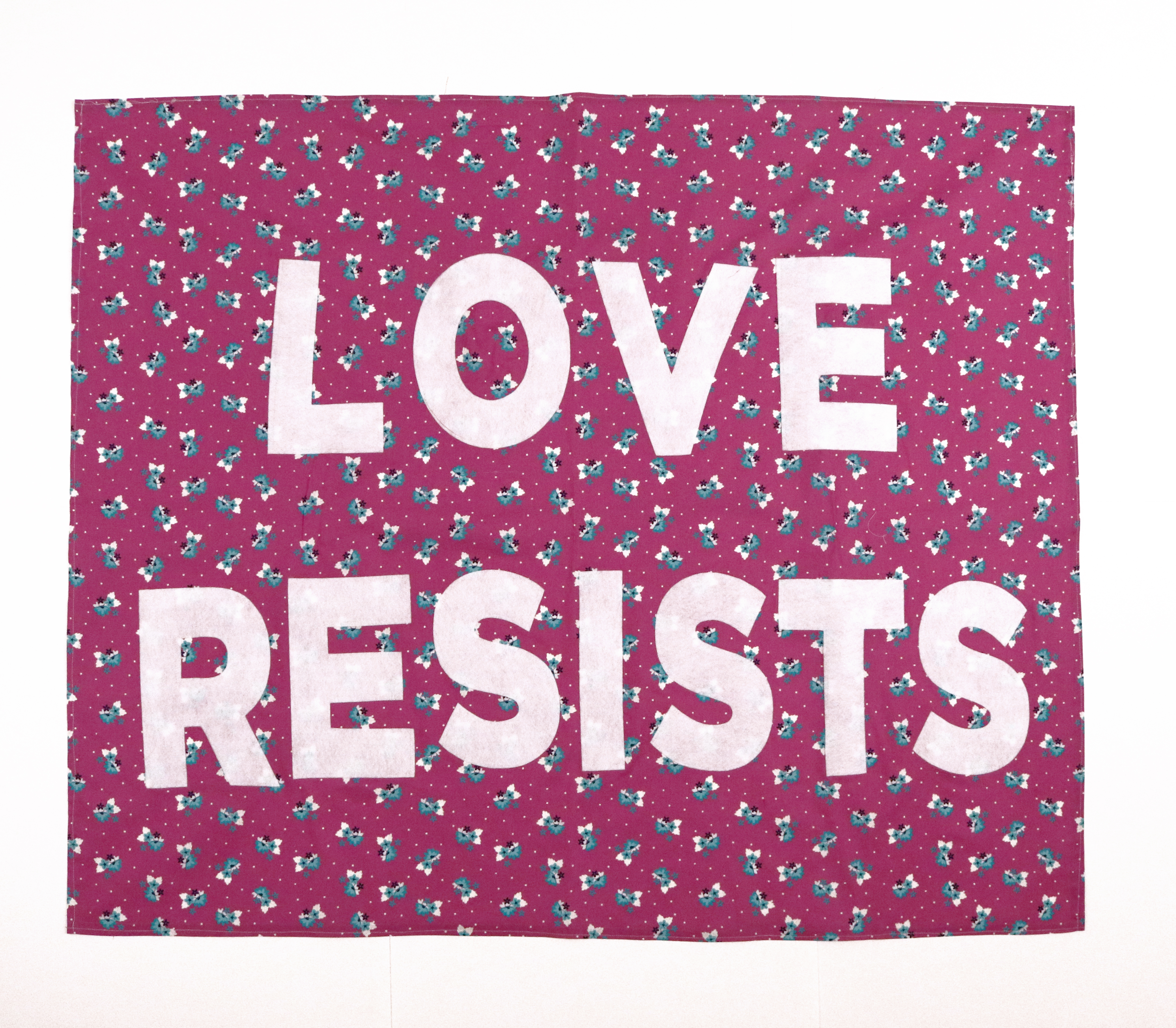 Sifuentes never thought she would become an artist, imagining herself instead as a veterinarian or immigration lawyer, but her education changed all that. “I had incredible art mentors at UC Berkeley,” she says. “[Ceramicists] Richard Shaw and Ehren Tool were extremely generous. I would come away in awe that I had been invited into their community of famous artists.” After undergraduate studies, she moved to Baltimore to earn a post-baccalaureate certificate in fine art from the Maryland Institute College of Art before arriving in Chicago to pursue an MFA at the School of the Art Institute. Since graduating in 2013, Sifuentes has shown her work widely, including at the Chicago Artists Coalition, the Jane Addams Hull-House Museum and the Wing Luke Museum in Seattle. She has also earned awards and residencies from 3Arts, the Smithsonian Institution, the Puffin Foundation and the Chicago Department of Cultural Affairs and Special Events, among others. 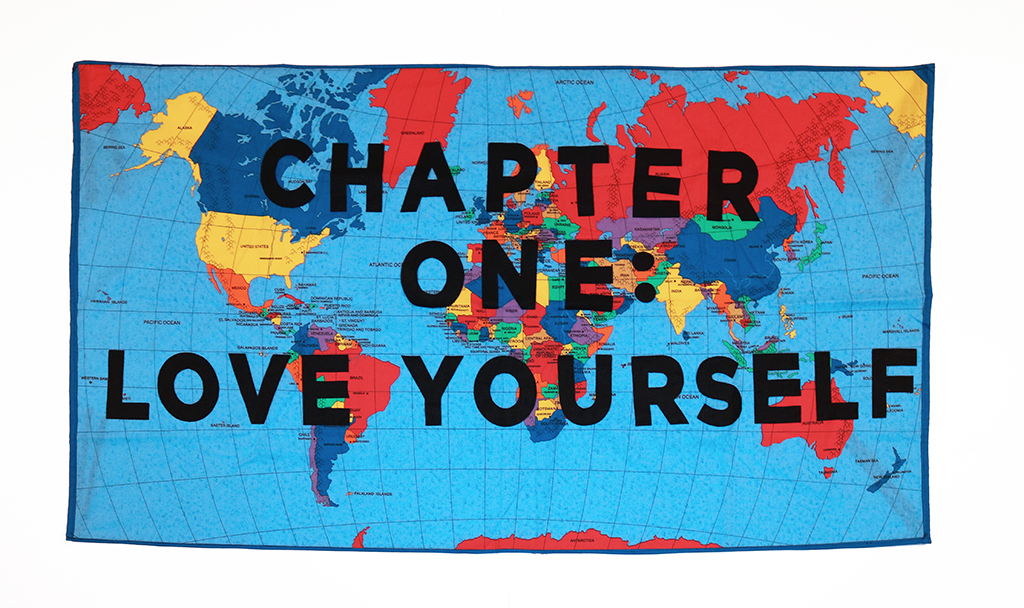 Banner from the Protest Banner Lending Library (Chapter One: Love Yourself, donated by Armando)

During her time in Chicago, Sifuentes has deepened her work in connecting community-building and art-making. “The art community here is super generous and warm. There are also lots of artists in Chicago who I really admire,” she says. “I’m excited that there is a large immigrant population, too, so I can continue working with non-citizens.” Before the November election, she presented “The Official Unofficial Voting Station: Voting for All Who Legally Can’t” at the Jane Addams Hull-House Museum. Anyone legally disenfranchised—non-citizens, ex-felons, etc.—or existentially irate was invited to cast an unsanctioned ballot. As with the actual election, Clinton won the popular vote.

Building on this direct engagement with politics, her most recent exhibition, “Protest Banner Lending Library,” on view at the Chicago Cultural Center through May 18, features protest banners made in the aftermath of the 2016 United States presidential election. Sifuentes began the project as a vehicle to come to terms with the election results, but soon extended an invitation to friends to join her in processing what had transpired. “Having the lending library at a physical space at the Cultural Center has given me access to a type of public that I haven’t had in the city,” she says. “Banners are a way for me to resist what is happening in the United States and in the world. It is a way to put my voice out there and not stay silent. I cannot be silent… My protest-banner-making workshops have become a place where people come together in solidarity through making. And making is, in and of itself, a form of resistance.” 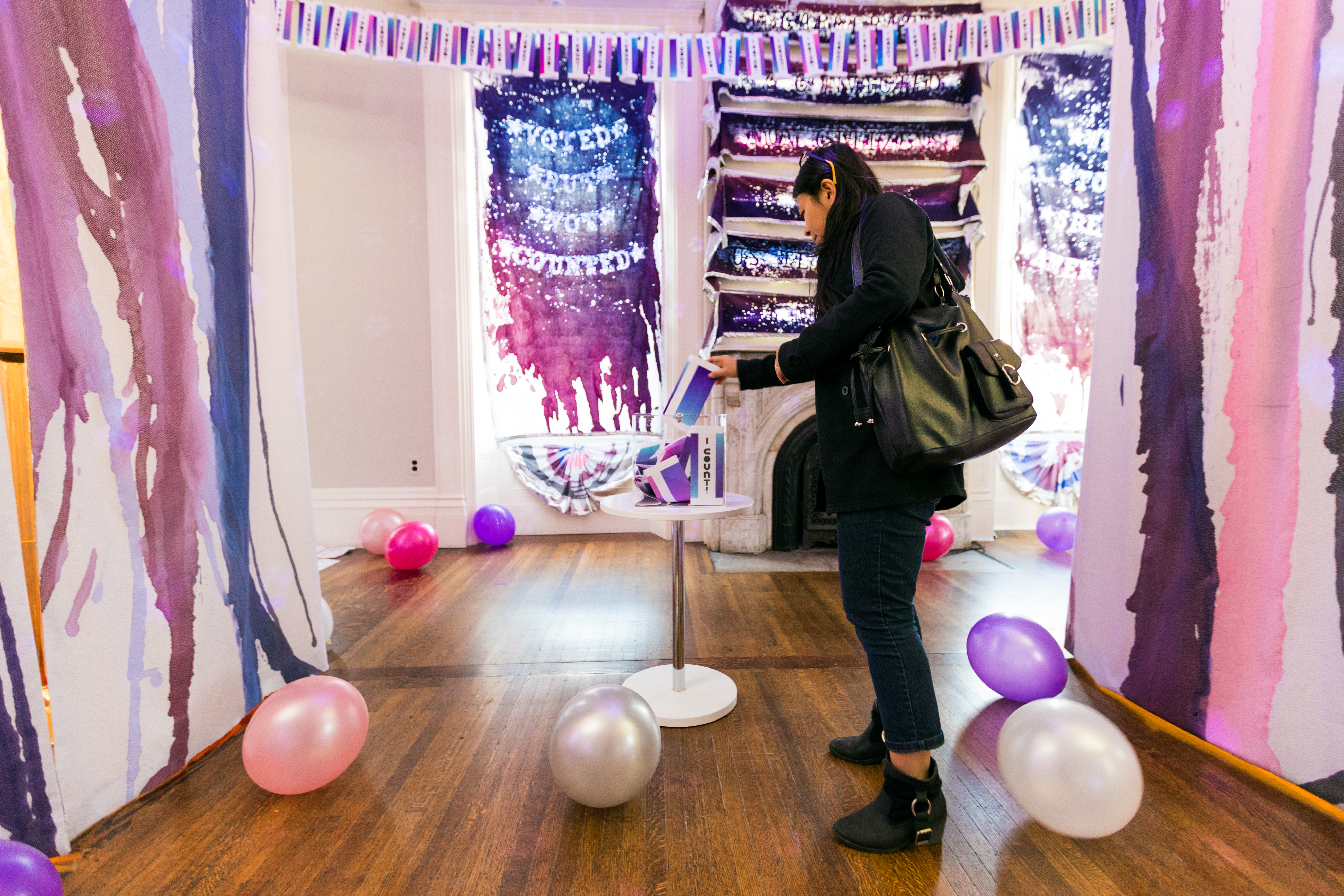 The Official Unofficial Voting Station: Voting for All Who Legally Can’t at the Jane Addams Hull-House Museum /Photo: UIC/JAHHM

Building on this practice, Sifuentes is presenting a protest-banner workshop at the Whitney Museum with Chicago-based artist Cauleen Smith. She is also speaking at the 2017 iteration of Open Engagement in April, which will be hosted in Chicago this year. In June, she begins an artist research fellowship at the Smithsonian. She has also explored writing and publication, taking on the concept of decolonization and craft. “It’s a difficult subject, but an important one, and I can see writing as something that will become more important to my practice,” she says. (Lee Ann Norman)