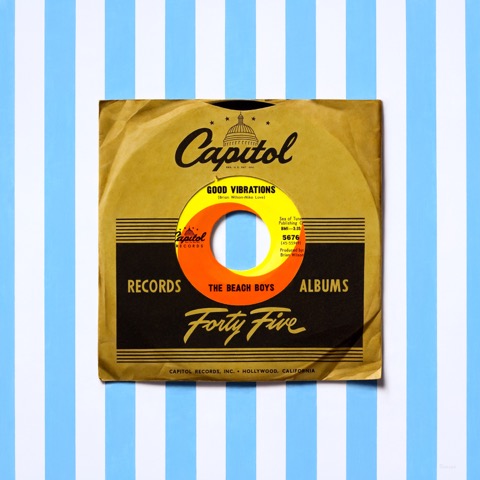 It’s nearly impossible to think about anything other than craftsmanship when viewing these trompe-l’oeil paintings. The artifice conceals itself even when seen through a magnifying glass—if you don’t bring your own, one is provided by the gallery. If they weren’t hanging in a gallery, some paintings might not even be recognizable as such. For example, the two painted representations of 45 rpm vinyl singles in paper sleeves are indistinguishable from the original objects unless you get close enough to gauge their perfect flatness. The most amazing piece depicts a memorial poppy. The naked eye can barely distinguish the tiny, fine hairs that wrap around the flower’s stem.

Initially, you’re compelled to ask “How the hell did he paint that?” Eventually, though, you’ve also got to ask “Why the hell did he paint that?” His subject matter is the ephemera of popular culture which the artist claims “embody importance, excellence and sincerity.” But that is certainly not how I would characterize the ugly, racist stereotype called the “Frito Bandito” impaled on the rear end of a pencil stick. Nor is it how I would characterize the brand-name junk foods, the packaging of which especially seems to fascinate the artist. Nor is it how I would characterize the memorial poppy and other military memorabilia that reflects nostalgia much more than anything like critical historical thinking. Nostalgia may be appropriate for a cemetery or a dining-room display cabinet, but in an art gallery, serious issues ought to be addressed in serious ways. 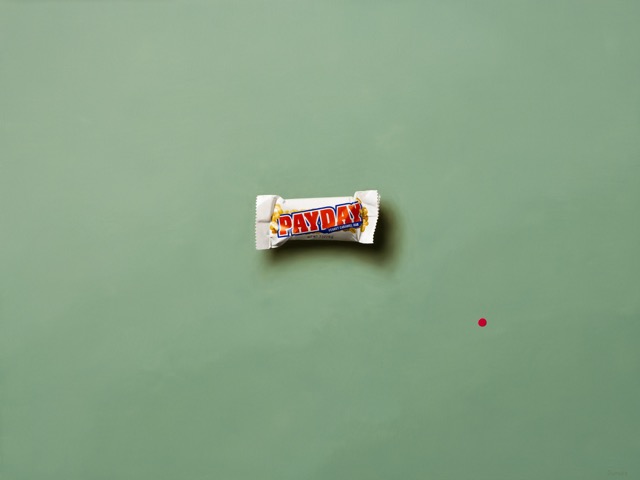 His depiction of standard World War II rations is a remarkable exception. The packages of sugar, cigarettes, candy, soda crackers and processed pork have been ever-so-carefully arranged by size, shape and tonal value. This piece does indeed belong in a gallery that specializes in abstract painting. And though perhaps unintended, this documentation of how the United States Department of the Army once fed its combat soldiers reveals something about its attitude toward nutrition as well as toward the young men put in harm’s way.

But this meaning is most likely a coincidence, because Kyle Surges primarily celebrates the banality of commercial art rather than transforming it into either irony, beauty or personal expression. The only difference between the original and the copy is the artist’s amazing mimetic technique. Now, more than ever, Americans need critical distance from what they’ve been fed by popular culture. (Chris Miller)