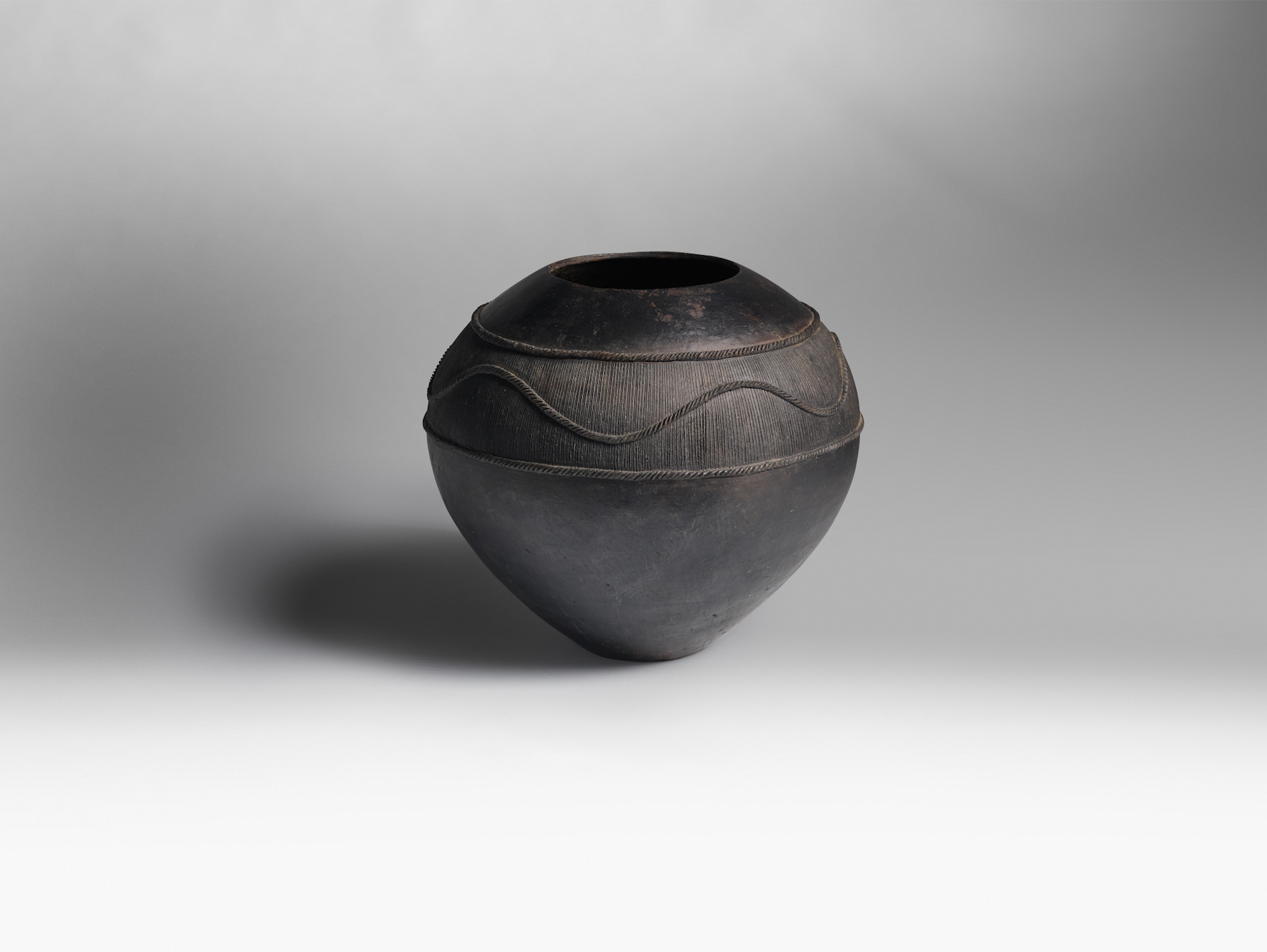 Those who remember “For Hearth and Altar,” a 2005 exhibit of African ceramics at the Art Institute of Chicago, might also remember that not a single potter was identified by name. Most of the work was purchased in village markets in the late twentieth century. Couldn’t research trips have been made to the villages of origin? That’s exactly what Chicago dealer Douglas Dawson and his South African colleagues did to find Mncane Nzuza, a sixty-seven-year-old woman whom they judged to be “outstanding among all contemporary Zulu potters.” And yet nothing was purchased or commissioned directly from the artist. Every pot in this Chicago exhibit has had Zulu owners who presumably used it in traditional applications in a hearth or altar. That’s still what makes an object authentic and valuable for collectors of this kind of art.

Nzuza’s pots are more elegant than most of the earthenware in that 2005 exhibit. Most of her pieces are Ukhamba, traditional Zulu vessels for serving beer at ceremonial occasions. Each has a unified shape, like a smooth pebble, with an opening at the top and neither foot nor lip. Built with coils of clay instead of turned on the wheel, they are balanced and symmetrical, though not perfectly so, and often show the chips or stains of use.

Nzuza develops an inner dynamic that swells into a voluptuous sense of form. On the surface she applies a rhythmic pattern, like a lace collar on a simple dress. They are loosely done—like Christmas tree lights strung above a bar—but have a strong, gentle and incessant rhythm. It does not appear that Nzuza ever uses the same pattern twice. She’s an artist exploring aesthetic possibilities more than an artisan turning out products.

Rather than displays of virtuosity, the pots feel sturdy, simple and dependable, but with a hint of decorative flair. As they fill the gallery, they create a mood of deep contentment, affirming that the details of life are transient while the underlying surge of life-energy is timeless and unstoppable. It’s a feeling that’s also created by the insistent rhythmic patterns in the African-American roots of American popular music. 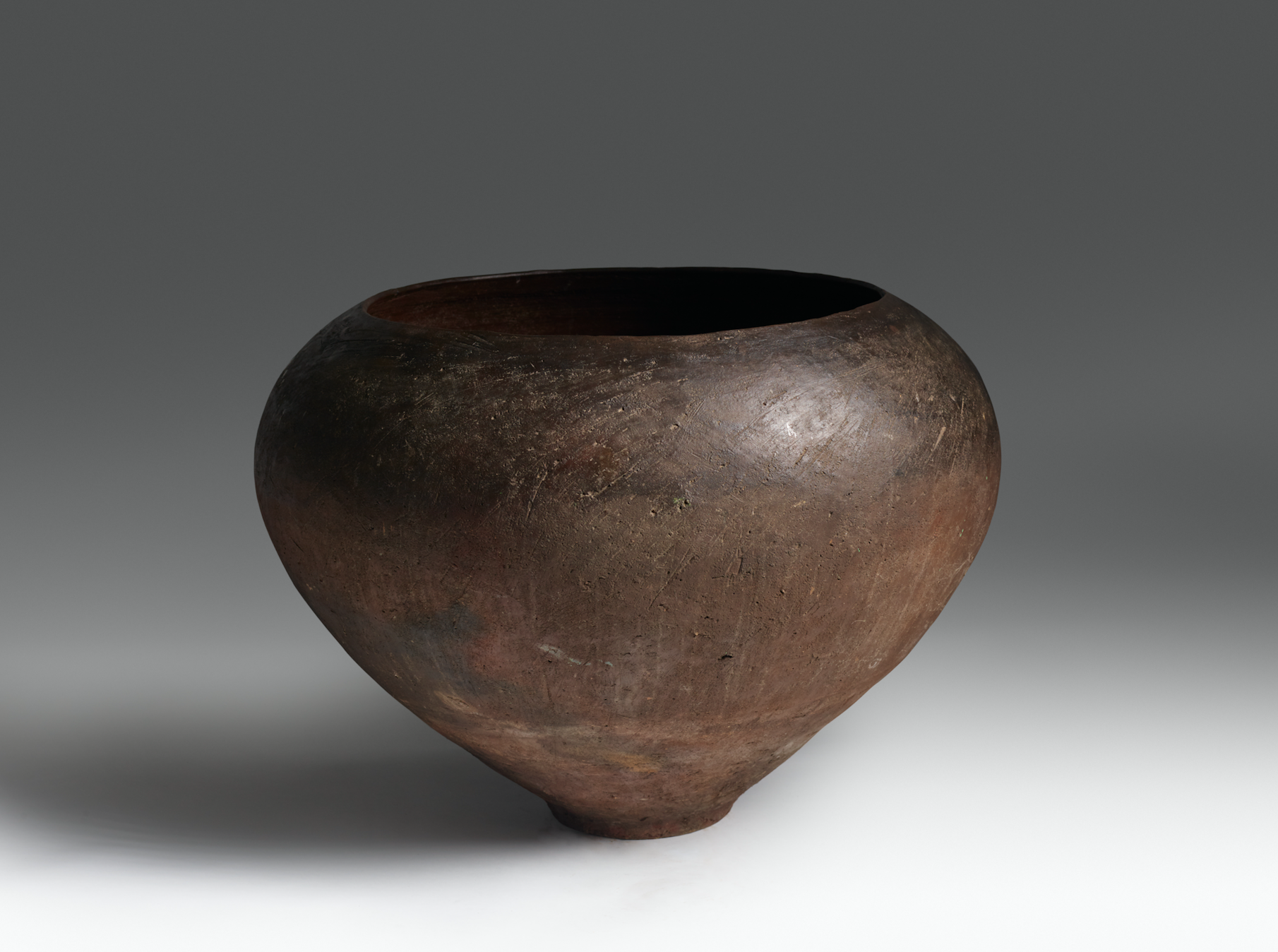 Apparently, this kind of work has become more useful to collectors connected to the global economy than to Zulu farmers. In Chicago, the entire show sold out on opening night, while in KwaZulu-Natal province, South Africa, demand for the work is diminishing. Nzuza is among the last to carry on the tradition. Why can’t traditional master potters like her sell directly to international art dealers, as traditional Japanese potters have long been doing?

This is the first time in its thirty-five years of selling historic and traditional non-European art that Douglas Dawson Gallery has identified a living artist by name. Perhaps she or other Zulu masters will eventually attract talented apprentices who will carry the tradition into future generations. Can the special qualities of an Ukhamba pot be cultivated outside the hearth and altar? I think so, but both artists and collectors will need to accept it as more of an aesthetic than a ceremonial object. (Chris Miller)