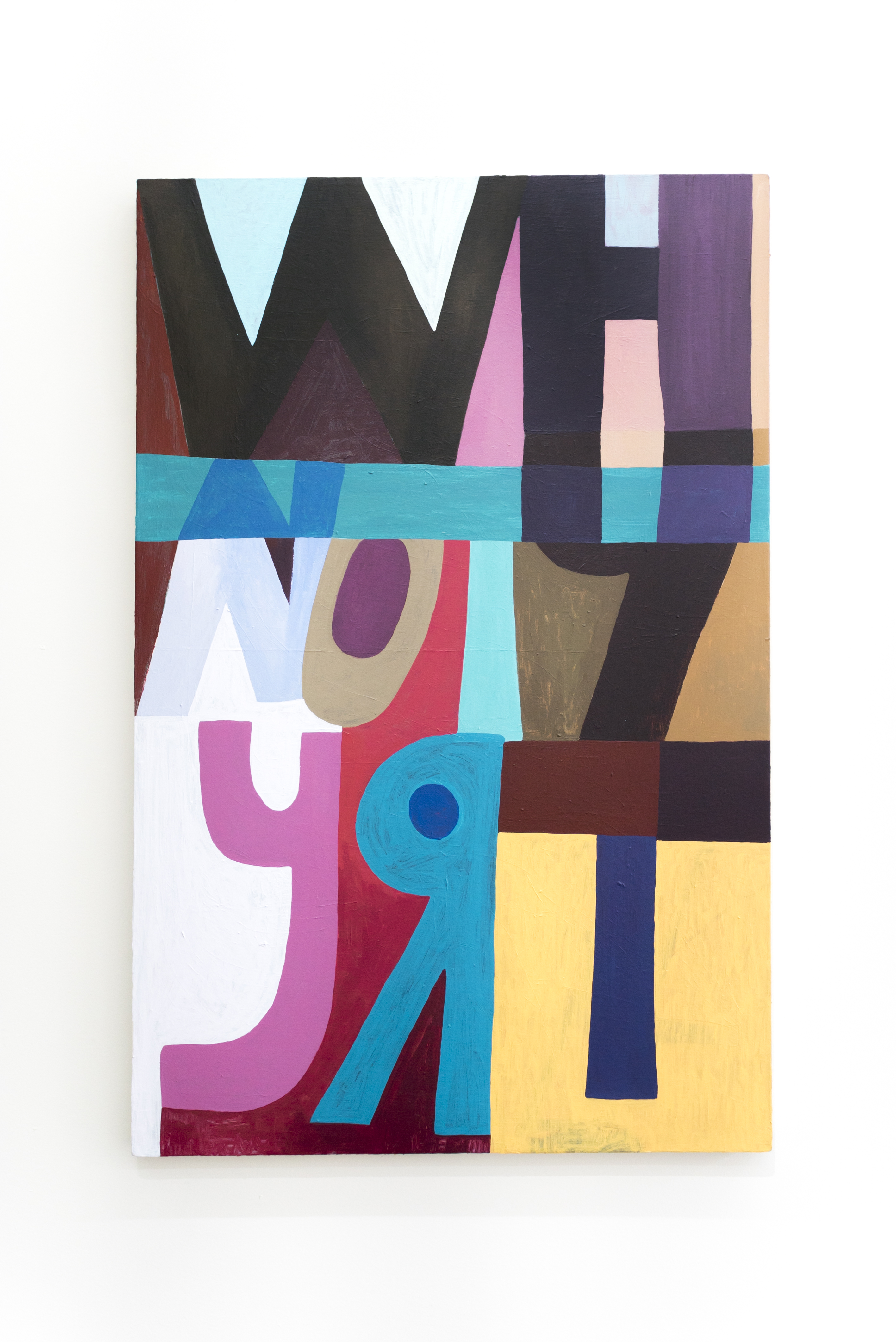 As the hour of Worldplay’s opening approached, the participating artists—Alberto Aguilar, Alex Bradley Cohen and Jesse Malmed—took to Instagram to share pictures of the show. And pictures of each other taking pictures of the show. It was a good last-minute reminder, sure, but it also exuded the spirit of the exhibition: playful, collaborative and multi-layered.

“Used Paper (Money Laundering)” is installed on the floor to the right of the gallery entrance. The piece is an amalgamation of 300 scraps from the artists’ studios. Visitors are invited to leave one dollar on the pile and take a scrap of their choosing. One reads: “EAT SWEETS!” Another fittingly features a collection of dollar signs drawn in different colored pens.

On the wall opposite the installation hangs “OOO (The Date)” by Malmed. Printed on fifteen green letter-sized sheets of paper placed side-by-side, the piece is a nonsensical narrative that stretches onto the next wall. At its end sits “Ball Corral (Text to Danielle Rosen),” one of Aguilar’s gorgeous sculptures from his Domestic Monuments series. These understated works combine regular household items in unexpected arrangements, resulting in completely new, no-longer-functional configurations. In this piece, four soccer balls are wedged between the rungs of a chair; a bright yellow hula hoop hangs over it all, framing the other items in its circle.

Cohen’s contributions, three recent paintings and a series of five smaller works made between 2014-2016, are stunning as usual. One is a portrait of Aguilar with a five o’clock shadow. He wears a blue jacket not unlike the one he wore to the opening. Yet it’s “Why Not Try,” that steals your attention. These words, in the artist’s distinct hand-lettering, take up the whole canvas in a not-quite-linear fashion. The rich brown of the “W” connects to the deep purple of the “H.” A turquoise stripe separates these from “NOT” on the next line, in light purple, blue and tan. “TRY,” spelled backward, is the brightest word, in pink, turquoise and blue. It’s difficult to look at this painting and come up with a rebuttal.

The works are in conversation with an exhibition text by Patricia Rose. “Wordplay is Worldplay” is a series of vignettes about different characters interspersed with prose, all using words and images provided by the artists.

The promotional postcard for the exhibition shows photographs—Jay-Z, Beyoncé and Blue Ivy; Cohen jumping over a mattress—collaged together with a text exchange between the artists. The three are discussing what the show will be about, using emojis, jokes, misspellings, all the language devices we employ in text messages every day in the attempt to get our point across. “We will learn to speak to each other; in many tongues and methods; to relearn the meaning of wordplay: in unison, a cappella and apart,” Rose writes in her exhibition text. Communication can be messy, words imprecise. “There is always more than one conclusion,” Rose notes. Art is a visual language whose meaning is fluid. Let Worldplay communicate with you as you find your own meaning in its gestures. (Kerry Cardoza)

CORRECTION: A previous version of this review misspelled the exhibition title. The show is called “Worldplay”, not “Wordplay.