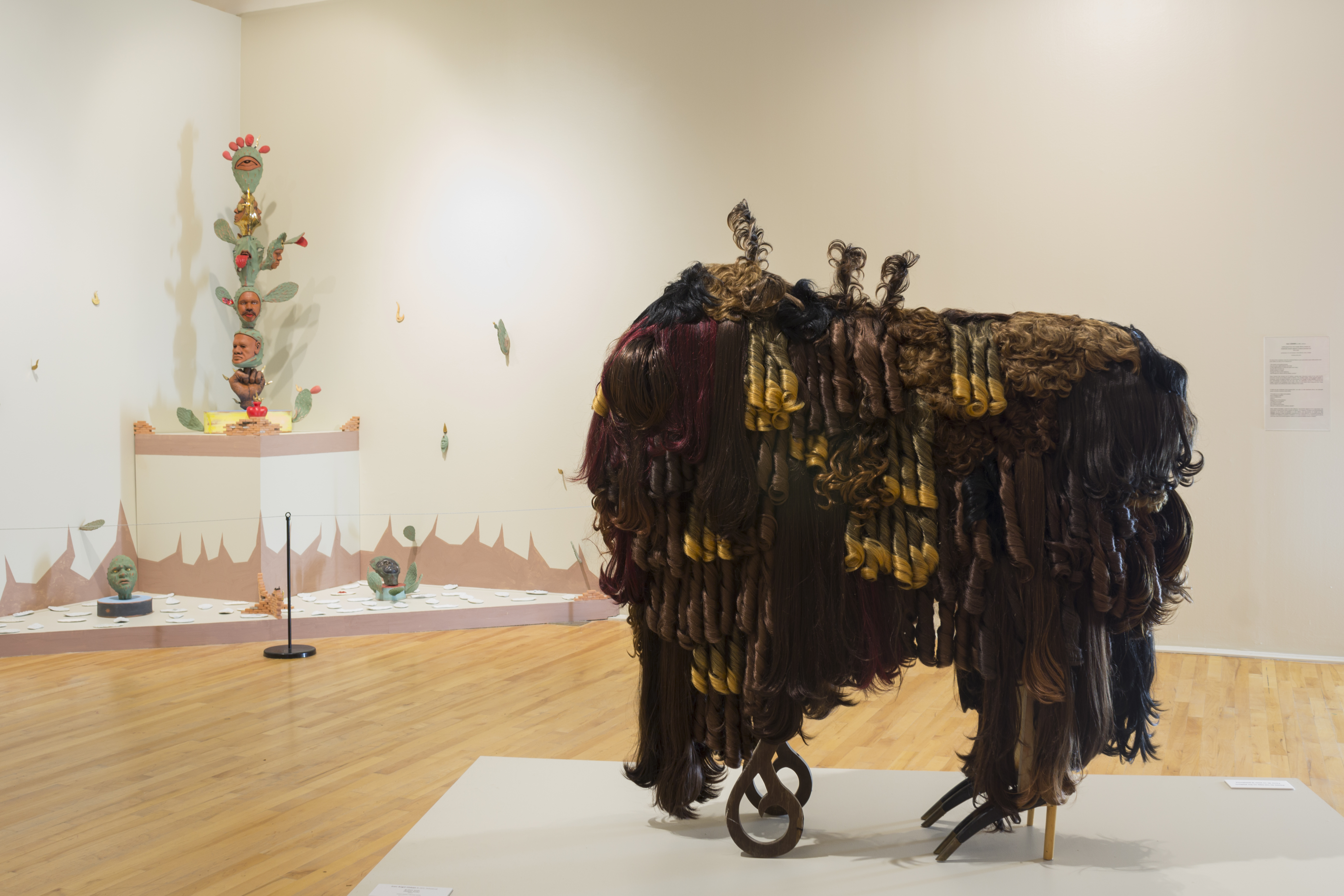 “Memoria Presente: An Artistic Journey,” the thirtieth-anniversary exhibition of the National Museum of Mexican Art, exemplifies its community-based mission. The selection of local artists emphasizes youth, education and immigrant backgrounds. Half were born in Mexico and all but a few have an MFA. Of the thirty artists, twenty-two were born after 1970, eleven were born after 1980.

The family-centric show is fun as well as politically engaged. At the entrance, Jorge Lucero invites those who need documentation to rip blank pages out of books he has provided. At the other end of the exhibit, Rodrigo Lara Zendejas has hung four inverted human figures from a spinning ceiling fan, suggesting both the traditional Danza de los Voladores of Papantla as well as undocumented immigrants spinning in recent political winds. In the middle, Yvette Mayorga tries to “Make America Sweet Again” with a colorfully intense installation that suggests the hardships as well as the saccharine dreams of crossing the border. Within an opposing corner, Salvador Jiménez-Flores has installed a conglomeration of cactus leaves and human faces that play with the bizarre possibilities of genetic engineering. Between them strolls Juan Angel Chavez’s life-size “Buffalo Sade” made of synthetic hair and foam. It is a cute and attractive fabric animal though the title and the banderillas suggest a darker message. The messages offered by many of the other pieces are much more simple and direct moral dualities. As asserted by the “stop all deportations” poster carried within a Rene Arceo linocut, immigration control is bad. As proclaimed by CHema Skandal!’s romantic image of two heroic males (Aztec warriors), and Sam Kirk’s romantic image of two iconic women (Frida Kahlo with Chavela Vargas), same-sex romance is good. As presented by Errol Ortiz’ memorial to Hadiya Pendleton, the fifteen-year-old honor student killed in 2013 after her final exams, shooting children is horrific. 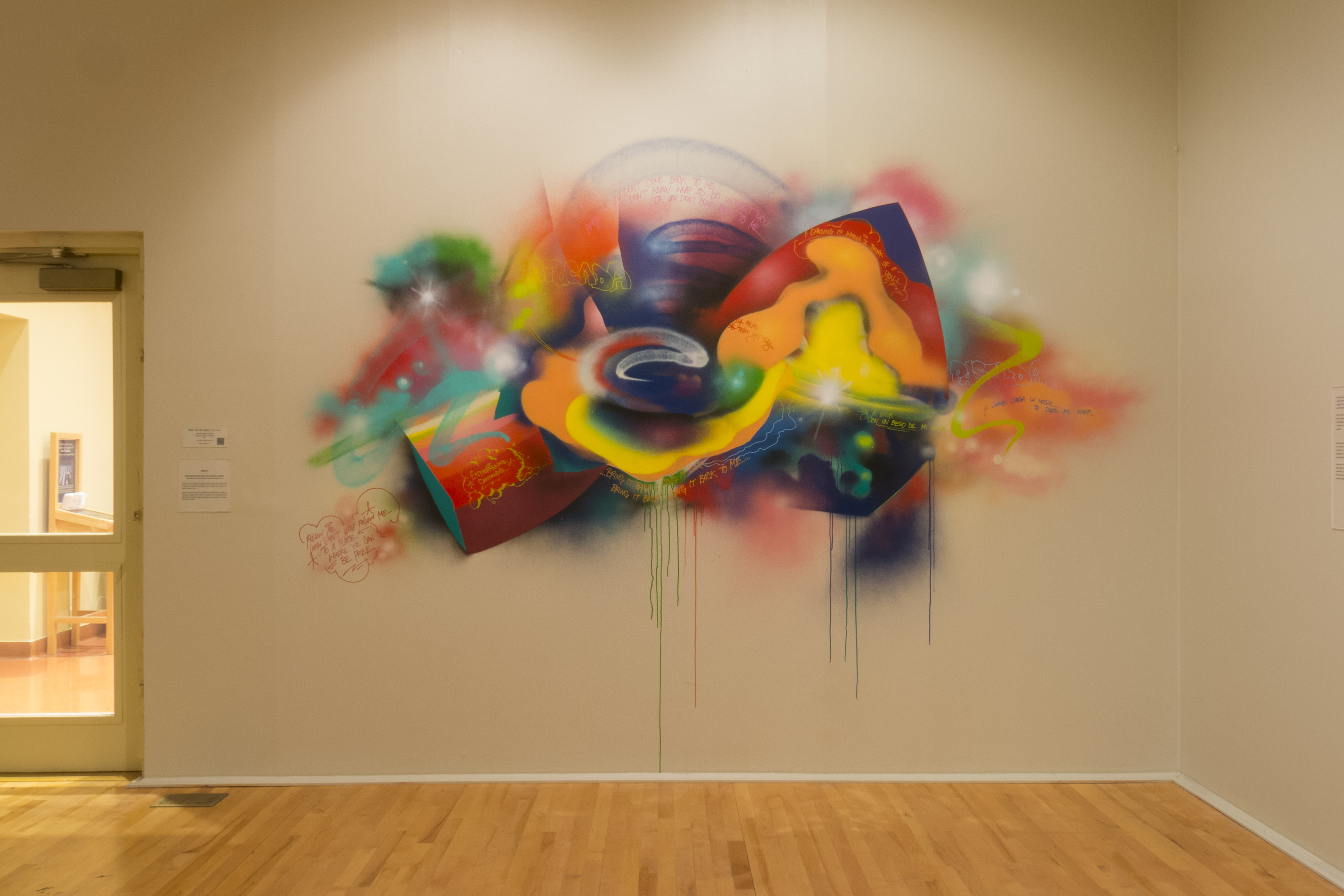 The conceptual training of the younger artists as well as the emphasis on entertainment and simple messages has often made high visual quality unnecessary. But nonetheless there is usually a tangible sense of attention to material, especially by Luis A. Sahagun who has woven silicone caulk into decorative patterns and given new, poetic life to discarded building materials. Miguel “Kane One” Aguilar has taken the art of graffiti to the heights of virtuosity. Dan Ramirez’s “Aletheia” is as attractively metaphysical as its name would suggest. Its craftsmanship is so refined, the piece seems to embody pure thought. On the opposite wall, Elsa Muñoz approaches a similar theme with “Plato’s Cave”—though it’s less about Greek philosophy and more about creating a quiet, cool space suitable for meditation. Marcos Raya offers biting moral outrage eclipsed by the complexity of his pictorial space. Going in the opposite direction, Errol Ortiz adds a moral dimension to the high voltage and well-crafted provocations of the Chicago Imagists. The Mexican tradition of printmaking is well represented by the floor-to-ceiling banners printed by Roberto Ferreyra. They are both beautiful and scary. Also ominous are Mario “Zore” Gonzalez Jr.’s and Christopher Preissing’s mottled sheets of dark steel, hung from the ceiling and accompanied by a soundtrack of ambient sounds taken from abandoned buildings. Most ominous of all are Maria Gaspar’s manipulations of Google earth images of Cook County Jail. They are as spacious and confusing as Piranesi’s Le Carceri d’Invenzione.

Balancing social, political and aesthetic concerns, the museum has made a notable effort to cultivate emerging generations of local artists and introduce them to their community. It does seem that the very best pieces have been made by the oldest artists: Ramirez (born 1941), Ortiz (born 1941), Raya (born 1948), Duarte (born 1952), and Ferreyra (born 1957), but perhaps that’s how it should be. (Chris Miller)