Ashley Yeo and Xiaofei Yue exemplify contrasting directions in East Asian art education. Winner of a first-place award at the graduation exhibition of Beijing’s China Central Academy of Fine Arts, Xiaofei Yue practices an updated version of traditional Chinese brush painting. Begun a hundred years ago, the Lingnan style uses traditional skills and materials to engage the excitement of the fast-paced, modern world. She depicts scantily clad, attractive young women presenting their big, innocent eyes and tender, tight behinds. They are grabbing their crotches and each other and possibly masturbating. Suitable for a soft-core magazine, they appear to be lost, vulnerable and accessible. They feel carefully balanced between expressions of giddy, light-hearted girlishness and the tragedy of sexual exploitation. Contrasting with the vibrant, deliberate contour lines of the figure drawing, splotchy tones on the limbs and errant marks across the page suggest transience. Youth is departing just as you become aware of it. 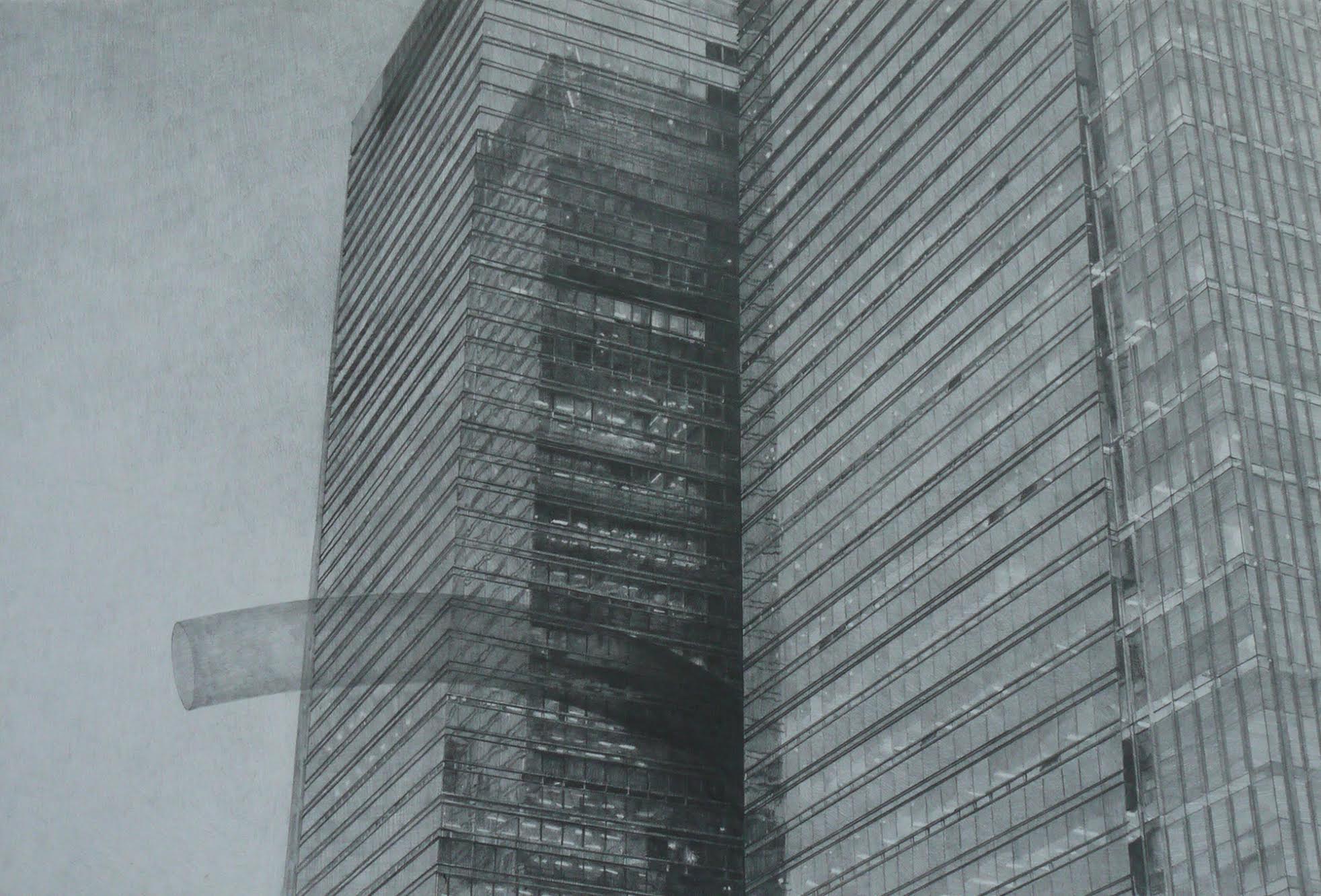 Ashley Yeo graduated from LaSalle College of the Arts, Singapore, a smaller institution, closer to the School of the Art Institute of Chicago in both size and curriculum. Singapore is majority Chinese, but rather than being tied to any specific ethnicity, style or skill sets, its largest art school is closer to the trends of international academia that analyze what is wrong with the world. From her series “Bones of a Dying World,” Yeo offers a carefully rendered graphite drawing based on a photograph of two high-rise office buildings in Seoul. The buildings seem quite ordinary, perhaps too much so, while between them something large and tubular is emerging. From her series,“Brutalism of this Universe,” there is a carefully rendered drawing based on a photograph of jungle undergrowth. From the center, a monstrous tree trunk points skyward after pushing out horizontally from its thick and tangled, twisted roots. There is nothing in the title to suggest that either of these images is intended to be phallic, yet that seems an obvious interpretation. All of her monochrome drawings feel grim and joyless, yet they also feel precise with carefully studied minutiae. The message seems to be that careful study has led to the following conclusion: the world is dying, the universe is brutal, and the problem is male sexuality. The only safe, comfortable place seems to be her own bedroom with its rumpled sheets, books and laptop computer. She has depicted it in a drawing revealingly titled “A lot of Things are Beyond Me.”

Coming from such a strong visual tradition, Xiaofei Yue’s brush drawings exhibit strong lines and luscious design, though her work may never surpass the brisk competence of fashion illustration. Ashley Yeo delivers her depressing message with an appropriately depressing style. The forms are puffy and the tones are dull. But she seems so sincere and dedicated to showing us the world as she sees it, her style may dramatically change as her life does. She’s not going to live in her own bedroom forever. (Chris Miller)