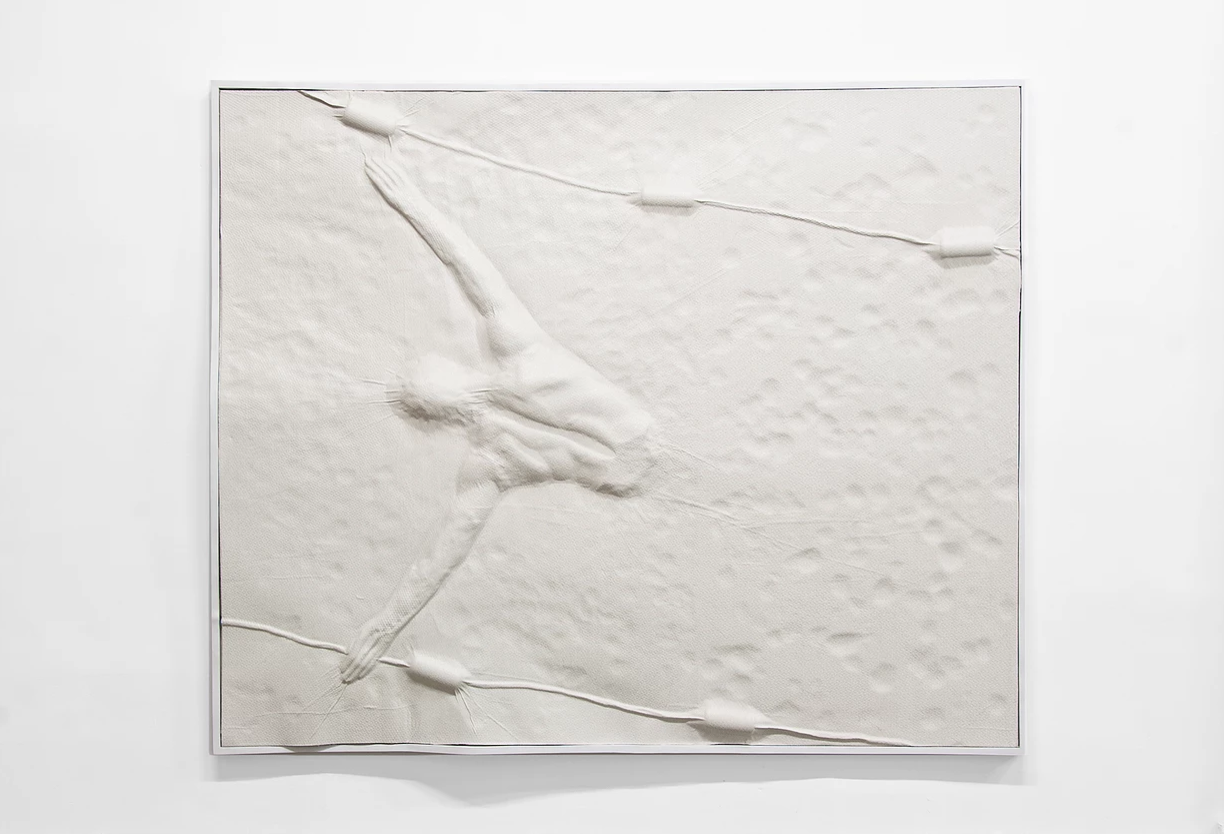 Nearly a year after lamenting the impossibility of witnessing the entirety of Chicago’s art world unfold each day, I find myself in need of some relief from the speed of it all. With the specter of irrelevance and obscurity spurring every cultural worker just barely getting by in this city, there seems never to be enough time to pause and reflect on our work, let alone to enjoy it. Perhaps this is why I am drawn to those who seem enlivened by the pace and intensity of this ragged life. When I received an invitation this spring to participate in a project called “The Dangerous Professors” at a gallery called Triumph in Pilsen, I saw before me the outline of a project that would forefront the unending state of precarious emergency faced by those who have committed their lives to education and the arts. The exhibition, with contributions from more than a hundred-and-fifty artist-educators from Chicago and the world over, represents the culmination of an ambitious, timely project undertaken by Ryan Coffey and Ruslana Lichtzier called Triumph Gallery. Slowing things down for a moment, I want to capture its story before it is too late.

Coffey and Lichtzier opened Triumph in a Pilsen storefront near their home in January out of necessity. When a partner space fell through as they had four exhibitions in the making, the curator-artist couple quickly found a nearby space to show the works that they had already promised to exhibit. First, they showed the captivating paintings of Lior Modan, an Israeli artist based in New York City whose practice currently involves vacuum-casting three-dimensional objects within the space of the picture, capturing their forms underneath found and custom-made fabrics and other equally strange textures. The frenetic schemes of the fabric race unpredictably over the topography of barely discernible, everyday things. Books, window shutters, dinner plates, toy cars and other mysteries swim beneath the surface, suspended in ambiguous but highly symbolic relationships with the warp and weft of their cloaking devices. Among the most stunning of Modan’s work shown at Triumph was “Modern Swimmer” (2016), a life-sized image of a human torso and arms reaching forward in the form of a butterfly stroke between the suggestion of two buoyed lane lines. Everything about this work is slightly off—the figure is too stiff to be caught in action and its orientation is skewed in an unfathomable ascent as its left hand crosses over the rope as if to catch it. But the hand does not grasp the line, it merely passes over. Whether this is meant to evoke failure or simply misunderstanding, I could not tell. Nonetheless, the image haunts me still.

After Modan, Triumph showed the work of Anna Shteynshleyger, Jeff Prokash, Greg Bae and Dan Devening in a group exhibition titled “DOOR,” which the gallery called “not a concept or a theme, but a barrier or a path.” Some of the work was decidedly closed off from the viewer’s immediate grasp, such as Jeff Prokash’s installation of industrial shelving holding arrangements of the kinds of grey foam blocks used to support open books of varying sizes in different angles of display. To those who have spent little time in museums or archives, the installation might have appeared coyly conceptual instead of playful, as it must have been intended. Prokash’s other work in the show, an open cardboard box brimming with faded confetti dots, hinted more at the artist’s joy in everyday forms. Found in the basement of a defunct nightclub in upstate Wisconsin, the withered carton and its pastel bounty laughed in the face of Duchamp and Judd. Set beneath Greg Bae’s subtle pencil drawings of cloud forms encased in acrylic, the pair appeared like a physical deconstruction of Dan Devening’s nearby works, in which the technical and the gestural make strange bedfellows in the mixed moves of pigment printing, painting and collage on paper. A stunning riposte to these three male formalists loomed large on the opposite wall. Anna Shteynshleyger’s photographs of the doors in a downtown Brooklyn office building are immediately relatable to anyone who has sought help from a therapist, lawyer, dentist or other practitioners. The high shine of over-lacquered woodgrain frames the brass panels and plastic nameplates of dozens of CPAs, PhDs, MDs and LLCs. Some doors are tentatively marked with paper printouts or sticky notes, and one bears the ghostly impressions of letterforms long since pried from its slick surface, an image that haunts as much as it humors. 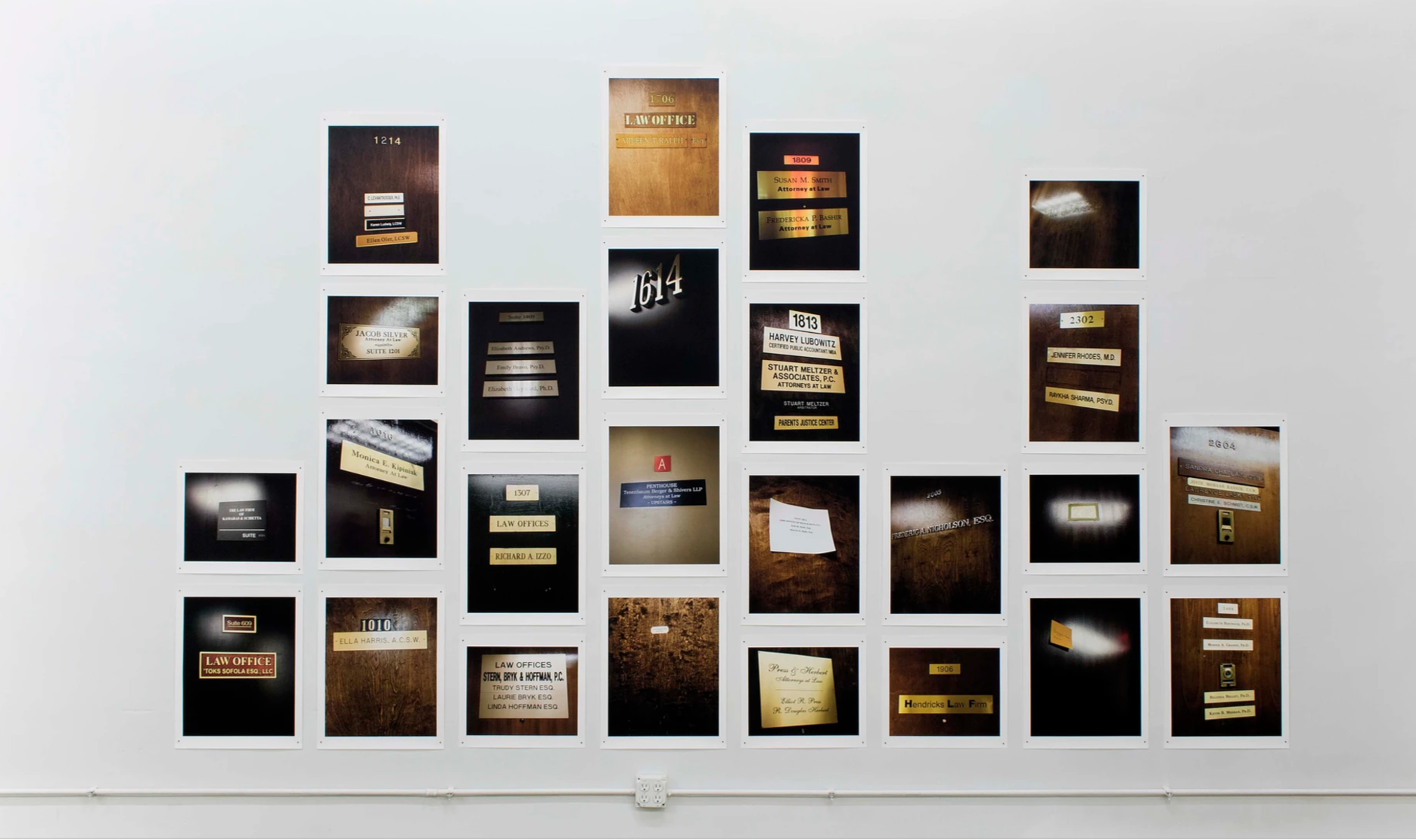 Shteynshleyger’s photographs foreshadowed the solo show of Ryan Coffey’s own latest work, which has taken an unexpected turn from his years of making carefully considered formal structures. His show last year at Efrain Lopez Gallery exhibited upright, sculptural abstractions built to ship and store with ease, a reflection of the artist’s years of experience in art handling. At Triumph, a suite of human-scale photographs lined the side walls and an interrupted grid of canary yellow rectangles hung in the back. Everything clung to the walls, leaving the gallery’s moss-hued floor fully exposed to the ample daylight that streams through the storefront windows. Exposed too was Coffey’s everyday private life, the images being enlargements of photos taken by his glitchy cellphone camera at odd and inopportune moments. Feet, floors and out-of-focus fingers signal the conceit of the work, which once understood transforms the strangeness of these photographs into something strangely familiar. A glimpse of bare legs standing before kitchen cabinets or a hairy, pinkish thigh and the blue blur of denim hint at domestic intimacy, while a fuzzy pattern of waves glistening in the sunset turns out to be a blurry snapshot of a wooden bar top. 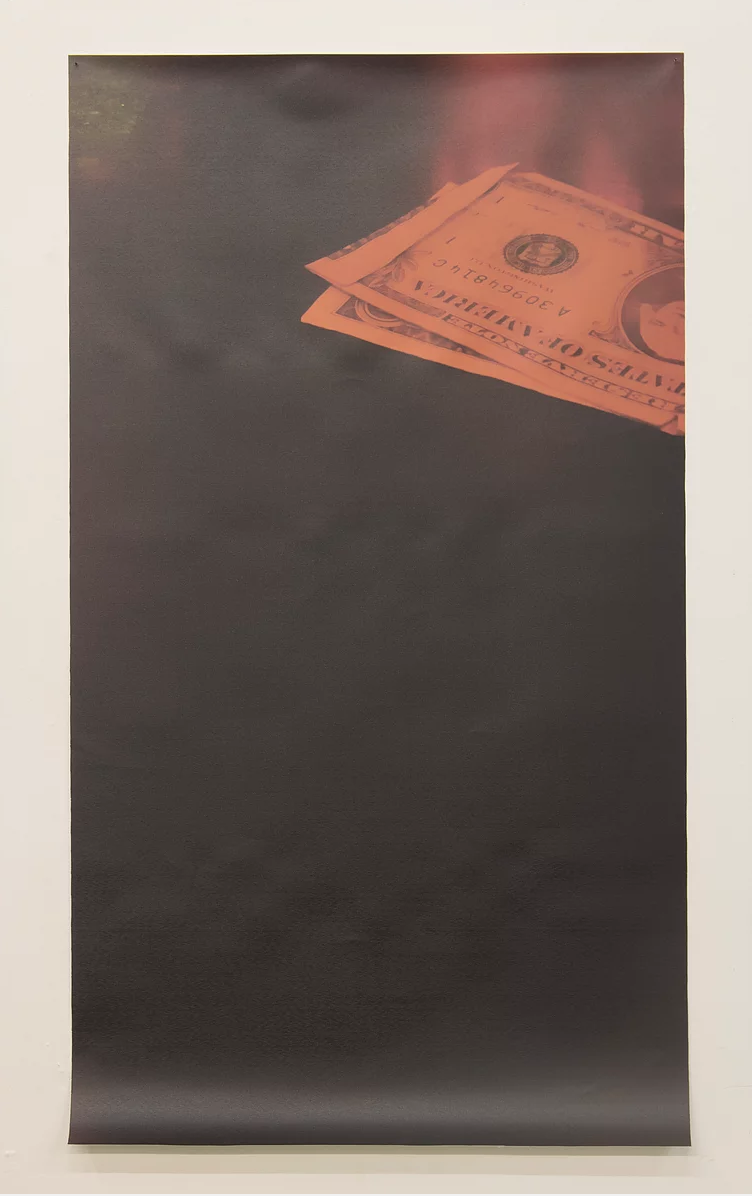 Ryan Coffey, from the exhibition “Ryan Coffey I / S” at Triumph, Spring 2017

The compositions are accidental, but Coffey selected his presentation from an archive of hundreds, allowing him to draw out compelling formal relationships among individually informal images. In the back of the gallery, dozens of yellow sheets bore the sloppy gestures of the artist’s hasty handwriting. They are screenshots from his phone’s digital notepad transformed, just like the photos, into their analog precursors. Many are mundane lists and reminders, like “field trip / call mike / gallery” or simply “coffee filters,” while others hint at domestic drama, such as “Dear / Brad / can she / be deported.” Occasional quips like “Richard / Prince is / the / Internet” trouble the line between the profound and the profoundly banal, which is what the show seemed to address most directly. One shares a sense of Coffey’s discomfort with what he is making, as if we do not know why it demands our attention, even as we admit that we cannot look away from it.

Triumph’s latest and perhaps final exhibition takes up a call-and-response structure that seems to be increasingly popular—Sean Ward’s and Jason Lazarus’ recent “PDF-Objects” at Mana Contemporary comes to mind, as well as Hiba Farhat’s and Murat Adash’s “The New Normal” in Beirut and Istanbul—in which contributors are asked to submit an artwork in response to a particular prompt. Lichtzier sought educators to self-identify as “dangerous” in response to the emergence of conservative websites like “Professor Watchlist” that publicly shame educators in order to chill protected speech and quell academic freedom. These educators submitted artworks and statements on the nature of their work and how it challenges the prevailing political order. The result is a salon-a-thon of impressive artistic voices, as well as a growing sense among the participants that the way forward must be increasingly radical. This is the kind of show that would not find a place in a fully commercial gallery nor an institutional space. Regrettably, this is also why such spaces seem to slip from our grasp so quickly, too soon to write their stories.

“The Dangerous Professors” shows through July 1 at Triumph, 2055 West Cermak.