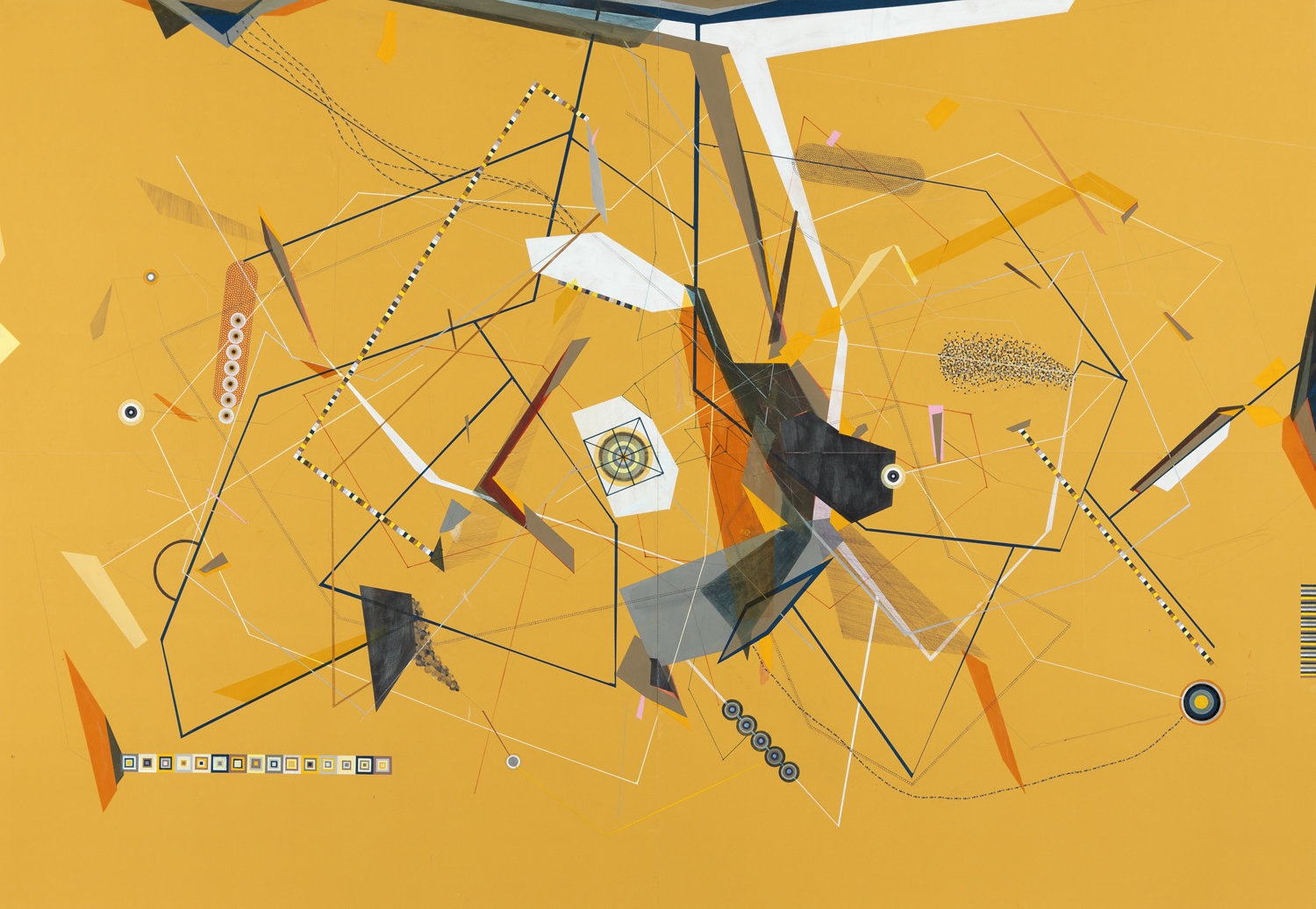 At the extreme limits of scale, the universe is no less violent, chaotic and destructive than the human-centered world in which we live. But since the behaviors of galaxies and subatomic particles are so remote, they can become the focus of peaceful and relaxing aesthetic contemplation. That’s how I remember the diagrams in physics textbooks, long after the complex equations have been forgotten. Dannielle Tegeder’s diagrammatical drawings offer the same pleasures, only more so because she is such an astute, inventive graphic designer. She’s in complete control of focus, movement and balance, as she delicately measures the sharpness of angles, the width of lines and the luminosity of areas. Regularly spaced gizmos appear to have been color-coded as in technical illustration, though comprehension is not the issue here. Her work is something like the Russian Futurists of one-hundred years ago, but less aggressive and threatening. Her graphic world is cheerful, lighthearted and fanciful. Each piece appears to represent some kind of robotic device, a few generations of technology beyond the Rube Goldberg machines of the twentieth century. Often they resemble puppets, held together by strings, suspended from above.

Several of the pieces have been named after well-known phenomena of the night sky. “Gamma Leonis,“ a binary star system in the constellation of Leo, is represented as a kind of mechanical spider. “Epsilon Eridani,” one of the nearest sun-like stars with a rotating planet, resembles a robotic human figure with a head, eye, arms and feet. “Mu Cephei,” a red supergiant in the constellation of Cepheus, resembles a spacecraft sent to record data and gather specimens from distant planets.

To augment the larger pieces, Tegeder has written strings of technical verbiage that may or may not reflect current knowledge in astrophysics and quantum electrodynamics. As long as comprehension is not required, it reads as cool and mysterious as the graphics: “Polarization processes emit the target’s atomic electrons as the field of the incident charged particle polarizes the target atom.” Aren’t those words soothing? 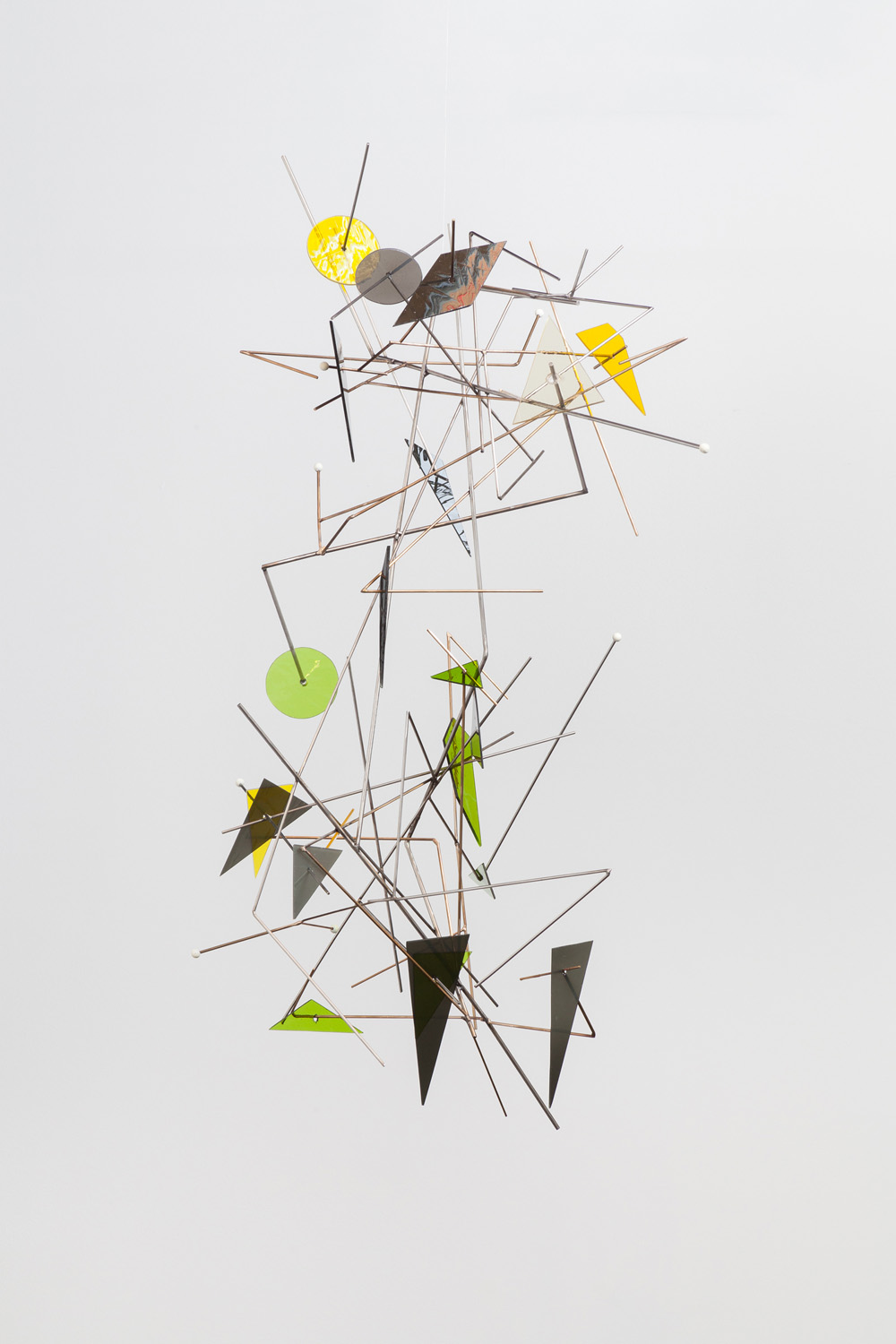 The small pieces, all seventy-seven of them, have been hung together as a single installation titled “Spectral Peculiarities for Constellations.” Mostly, they present the discrete visual elements that are strung together in the larger works. Several pieces interact with their neighbors. By themselves, they are less interesting. But to augment some of them, Tegeder has collaborated with a composer, Matthew Evan Taylor, to offer combinations of sounds that seem to mimic the visuality. It’s fun and it works. Sometimes I prefer to close my eyes and just listen to the music. It’s very well done.

With a playful spirit, Tegeder’s drawings celebrate rationality, curiosity, expertise and inventiveness. It feels very good to be around them. One might note, however, that the robotic machines depicted will never be built and the verbiage that accompanies them has the form but not the useful content of scientific presentations. One might also note that the most critical problems that we now face involve human consciousness and social interaction rather than high-tech hardware. Like science fiction, her work serves better as a diversion from our moment in history rather than as a serious engagement with it. (Chris Miller)