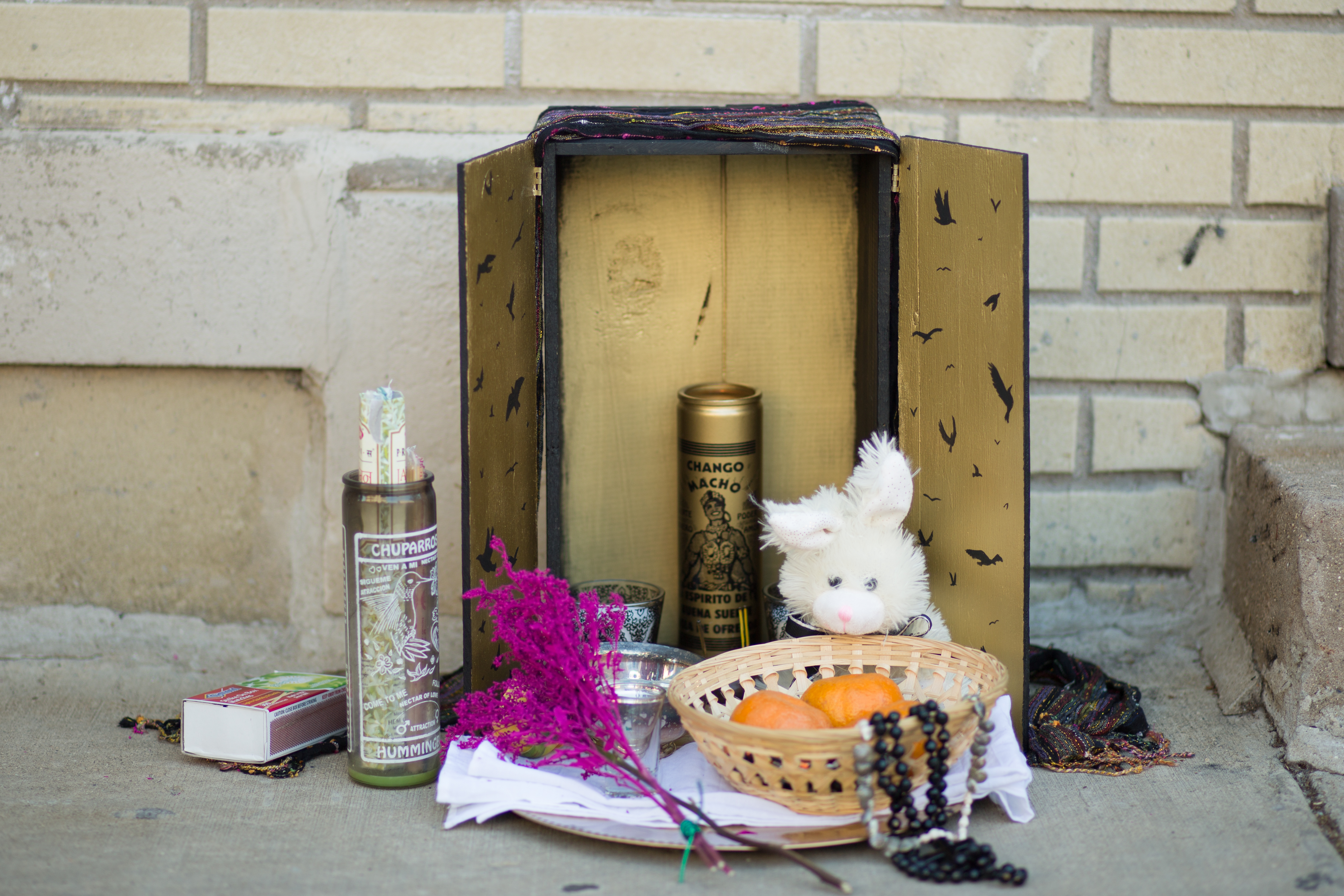 Teshika Silver, Detail of “Altar for Freedom of Black Birds,” 2017

“Why do queers love astrology?” Chani Nicholas, the popular astrologist, asked in a viral blog post last fall. “Maybe it’s because we understand that our identities come in as many variations as there are stars in the night sky.”

Astrology and witchcraft are not synonymous, but they are bedfellows. Both date back thousands of years, and both have been treated dismissively by a mainstream culture that considers the practices fake. Which is likely why Nicholas’ words came back to me at the opening of “hex yeah, Witches!” at + gallery, a space that aims to center the voices of non-binary and LGBTQ+ folks, among other intersecting identities—hence its name. Regardless of the orientations of the artists, both the space and the work on display evinced a feeling of openness and acceptance. Someone grilled corn for vegan elotes at the entrance; visitors could get their Tarot cards read or have their energy cleansed by local healers. A bourgeois white cube opening this was not.

The group show features a range of mediums, from pen-and-ink drawings to oil paintings to a full-room installation, all made by Chicago-based “self-expressed witches.” Approaching the gallery from the street you first encounter “Altar for Freedom of Black Birds” by Teshika Silver, who also co-curated the exhibition. Set on the sidewalk beside the entrance, the piece is “a placeholder for the hopes, wishes and dreams of all Black children” harmed by the state. The artist has penned a message to the future in gold ink on black paper hung above the work, reminding viewers, and ostensibly passersby, that we are stronger together. The black and gold altar holds offerings including lit candles, incense, oranges, flower petals, a rosary, clementines and a stuffed animal.

The main room shows two-dimensional pieces, the most striking of which is a triptych of collaged works on paper by Kacy Christman that depict cards from the Tarot deck. Christman writes that one card, the High Priestess, “represents intuition, higher powers, mystery, and the subconscious mind.” Here she takes the likeness of the teenage R&B singer Chloe Bailey, clad in full leopard print and donning a crown. 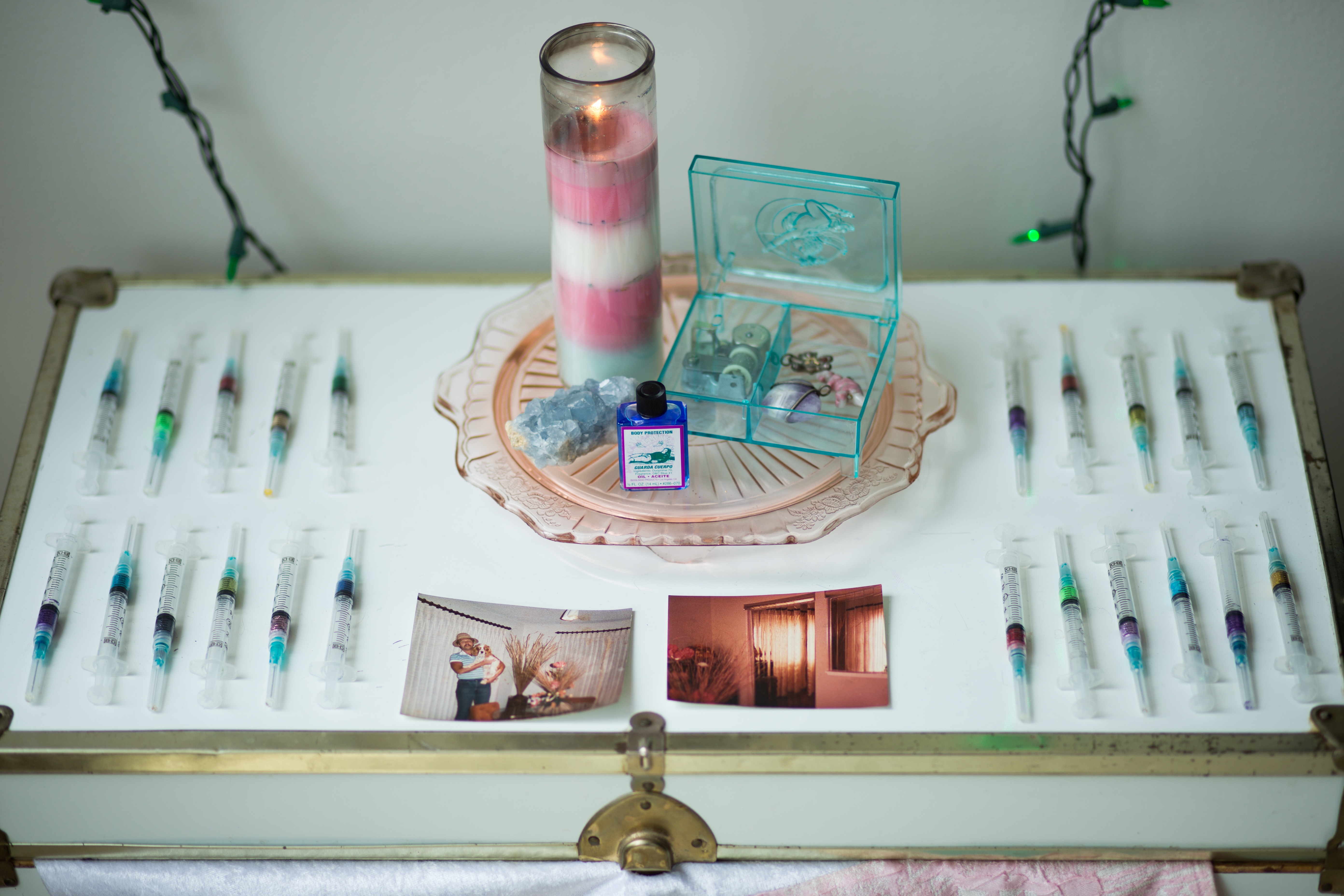 “Fool’s Catharsis,” an installation by Kheiron Katsuleas, takes up the rear room. The energy notably shifts upon entering the immersive environment. Inside, white rose petals line the perimeter, incense burns, a green light partly illuminates the space. In one corner there is a pillow-covered “reflection bench,” with blank notebooks available to share your thoughts. In another, there’s an altar-like display on a white chest, a trans flag hanging from it. A votive candle, made by the artist, burns in a glass dish next to necklace charms and other personal trinkets. Two aging photographs lay in front of this display. One shows a pink-hued room lit by an empty doorway. In the other someone holds a cocker spaniel beside a display of faux flowers. Lining these items on either side are plastic syringes filled with a multicolored glitter substance. To the right of this altar, a spiral of black fabric hangs from the ceiling. This functions as a separate space within the room at the center of which holds a shell-shaped dish with the word “offerings” painted on it. The layout of the installation helps bring the gallery-goer through the room in a linear way, cleverly shaping the experience in a way that mirrors the Fool Tarot card that inspires the piece. The Fool card is the first in the deck and represents the start of a journey. “We have always been persecuted. We have always been revered,” Katsuleas’ wall text reads. “As self-healers and self-determiners we stand as a threat to the powers that be.”

Katsuleas’ words echoed those of Chani Nicholas, acknowledging a range of identities and the importance of both darkness and light. “Why do queers love astrology?” Nicholas asked. “Maybe it’s because we need to know that no matter the rejection that we have faced here on earth, there is a place for us among the stars.” In this space, you can’t help but feel the power in alternate ways of seeing and experiencing the world. (Kerry Cardoza)