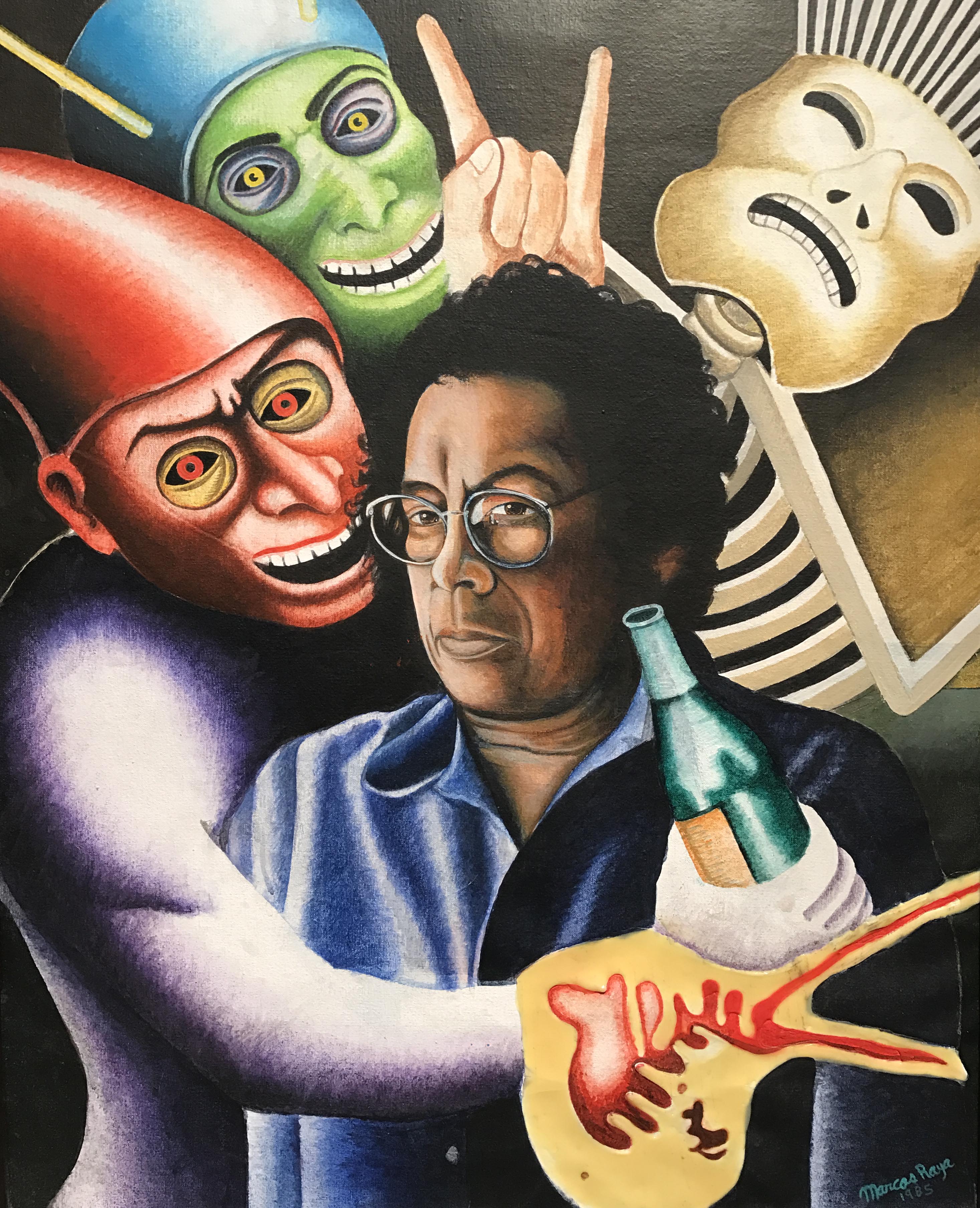 Spanning forty-five years, this selection of paintings, constructions and installations focuses on death, illness and mental disorder. Welcome to Marcos Raya’s personal hell. But also welcome to a collection of some extraordinary objects, especially paintings. Raya is remarkably adept with pictorial space. He disrupts and vibrates it with clean, sharp, aggressive edges and color and it tells a compelling story. Ever since Ivan Albright, many distinguished Chicago painters have specialized in the dark side of human life. Chicago artists love to depict monsters, alienation and misery. Raya seems to have experienced much of it himself. When he paints demons circling around an alcoholic’s first drink, they’re as psychologically real as devils in a medieval fresco. Raya is obviously familiar with art history, especially as channeled through the twentieth-century Mexican muralists. But more than quoting it, he lives it.

Like many Chicago artists, Raya presents life as driven by compulsion rather than choice. One such compulsion, shared by many, is the collecting of kitsch, the mass-produced stuff marketed to the broad audience that prefers sentimental sensation to serious reflection. This is the fourth such collection by a Chicago artist I’ve seen exhibited in the last twelve months. In the Chicano context, it’s called rasquachismo. Raya specializes in Roman Catholic devotional objects which he often modifies with sunglasses, bandages, or other relics of his own life. The rasquache on display also includes a reactionary, misogynist piece with text that reads “in the future women will have dicks and dogs will talk.” As if, heaven forbid, both might eventually become the equals of men. It might not be his own opinion, but like the Christian iconography on display, it’s a legacy he can’t escape. 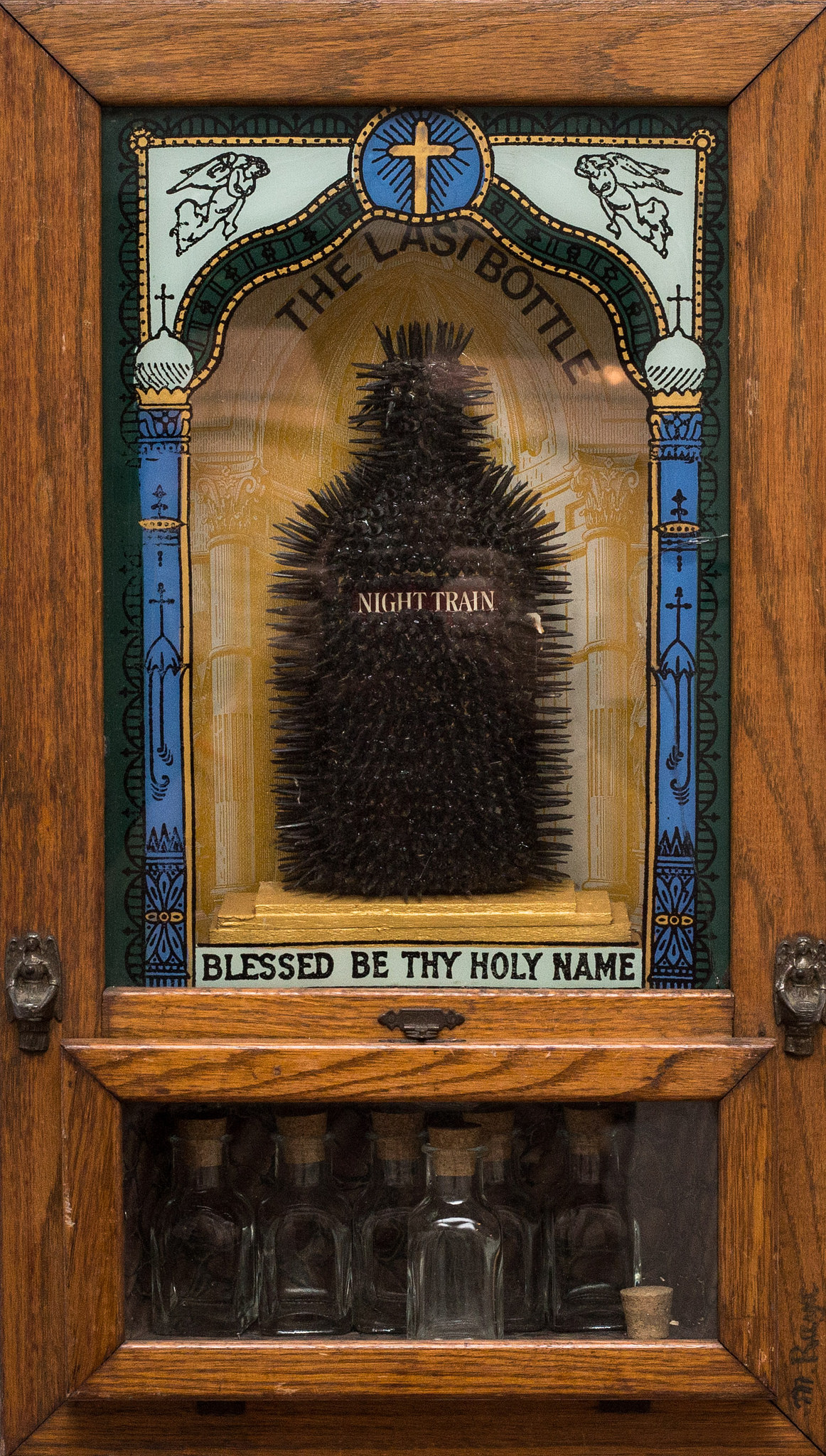 Several pieces address compulsive drinking, foolishly begun and fitfully ended. A prickly bottle of “Night Train,” a cheap, fortified wine, is encased in a shrine called “The Last Bottle” (1985). It may mark the cessation of a bad habit but not the end of an obsession. “Last Bottle 2” was constructed twenty years later and now “Night Train” has lent its name to this exhibition.

Other compulsions involve sickness, violence and death. The artist raises the issue of sexual arousal in an installation piece titled “The Fetish of Pain.” Above a collection of hospital paraphernalia, the artist has painted a monumental male torso. A scalpel and tube are penetrating the nostrils, brilliant colors are blaring from the eye sockets, while the lips are full, calm and peaceful. Presumably, the man is turned on. Possibly the artist is also aroused by the images of violent death in another installation, titled “PTSD,” as well as by the life-size plastic skeleton he has strung with jewelry and encased in a plush wooden coffin. The gem-encrusted skulls are far more attractive than the multi-million dollar version fabricated for Damien Hirst. Like great reliquaries of the past, Raya’s work with human bones is beautiful as well as creepy. 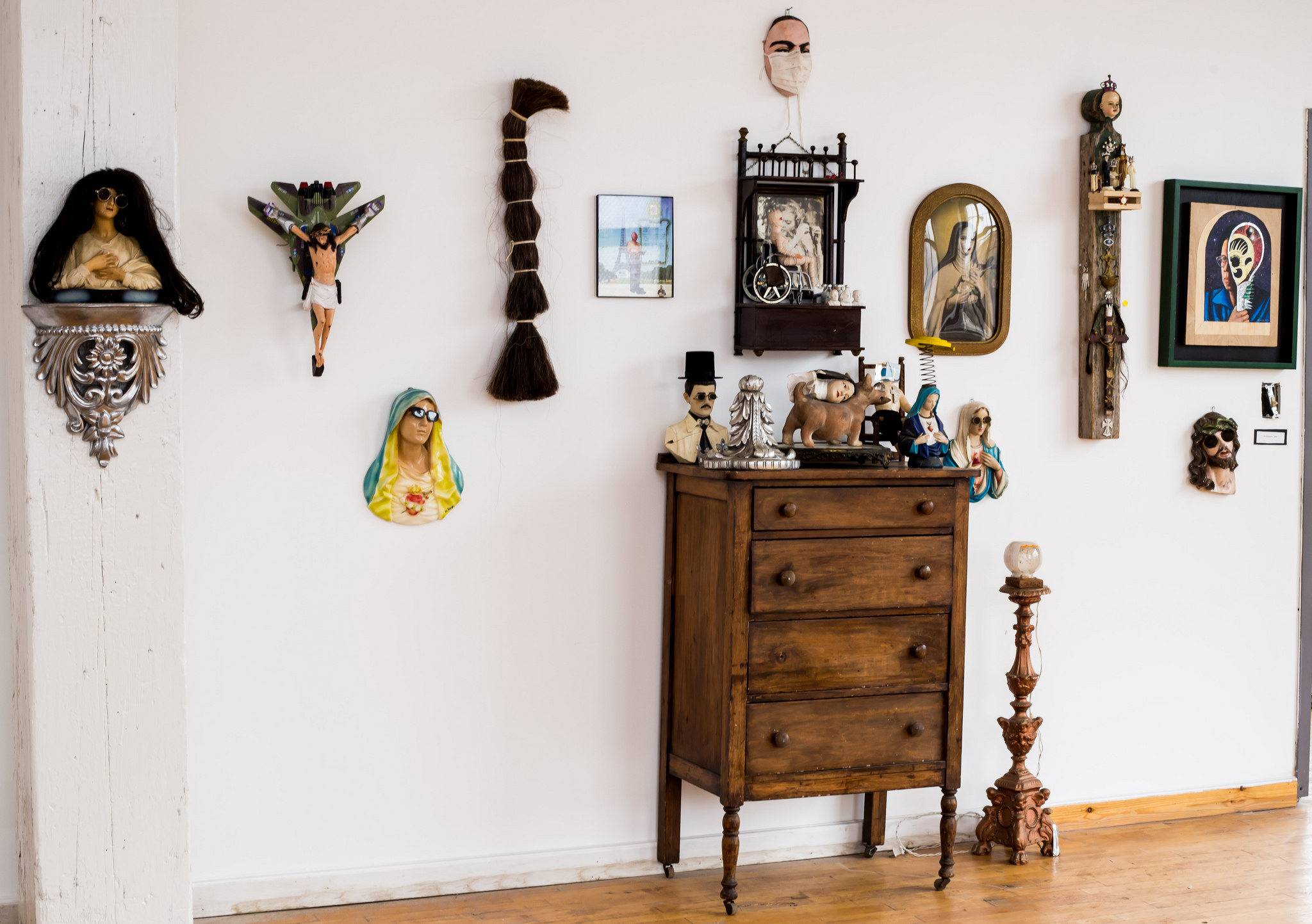 So much of this work has apparently been done with great love as well as skill, but also with deep sadness. There is no hope or idealism or any concern for what lives on when his life is over. The world of compulsion is a morbid and lonely one. (Chris Miller)