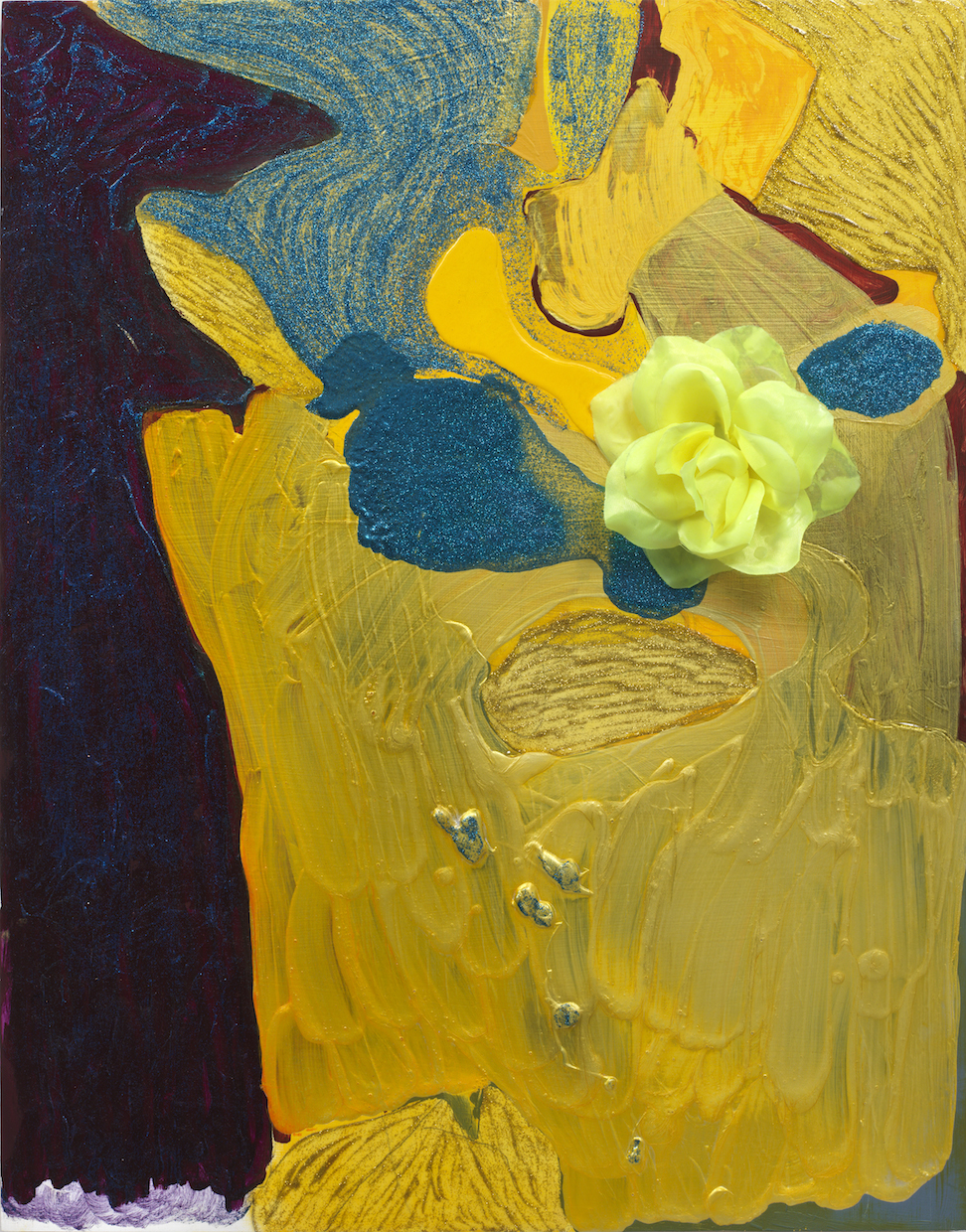 The juxtaposition of early and recent work throughout this retrospective of Candida Alvarez (born 1955) begs repeated query of the change. One explanation might point to two powerful institutions. Her early work reflects a role in a traditional Puerto Rican family. Her later work follows the trends of contemporary art. Throughout she exhibits that talent for visual expression found in even her earliest work, a pastel portrait of her dog “Gigi,” executed at the age of twenty.

“Soy Boricua (I am Puerto Rican)” (1989) presents something like a snapshot of a frail, wary girl, clutching her heart and furtively staring out at the tempestuous tropical ambiance that envelops her. Hung beside it, “Chill” (2011) presents a red-tipped swipe of blue that runs down the middle of a cool and textured field of gray and white. It’s joyful, exciting, and more about the language of painting than autobiography.

On another wall, “He loved to dream” (1985) portrays the artist’s father. We’re shown a stocky, somewhat sad, gray-faced man. He’s composed of flat planes and sharp angles—but he wears a heart on his sleeve, a pet dog over his eyebrow, and a little girl in the crook of his arm. Possibly he loves them more than himself. Hung beside it, “Hi Ho Silver” (2008) is a romp of billowing shapes, and some hand-written text, swirling across a field of silver and black. The crisply executed, sinuous lines and areas of solid color feel like a humorous cartoon that’s been chopped up in a blender. It’s a playful act of postmodern deconstruction.

Overall, the pieces from the 1980s are like confessional poetry. They are dark, sad and introspective. The self they portray is small and vulnerable, but also aware of a passive female identity that may not always constrain it. My favorite piece from this period is “Sit, Stand, Kneel” (1986), an arrangement of three panels that shows a girl doing what she’s been told, but also becoming larger, more powerful and more present as the panels move from left to right. 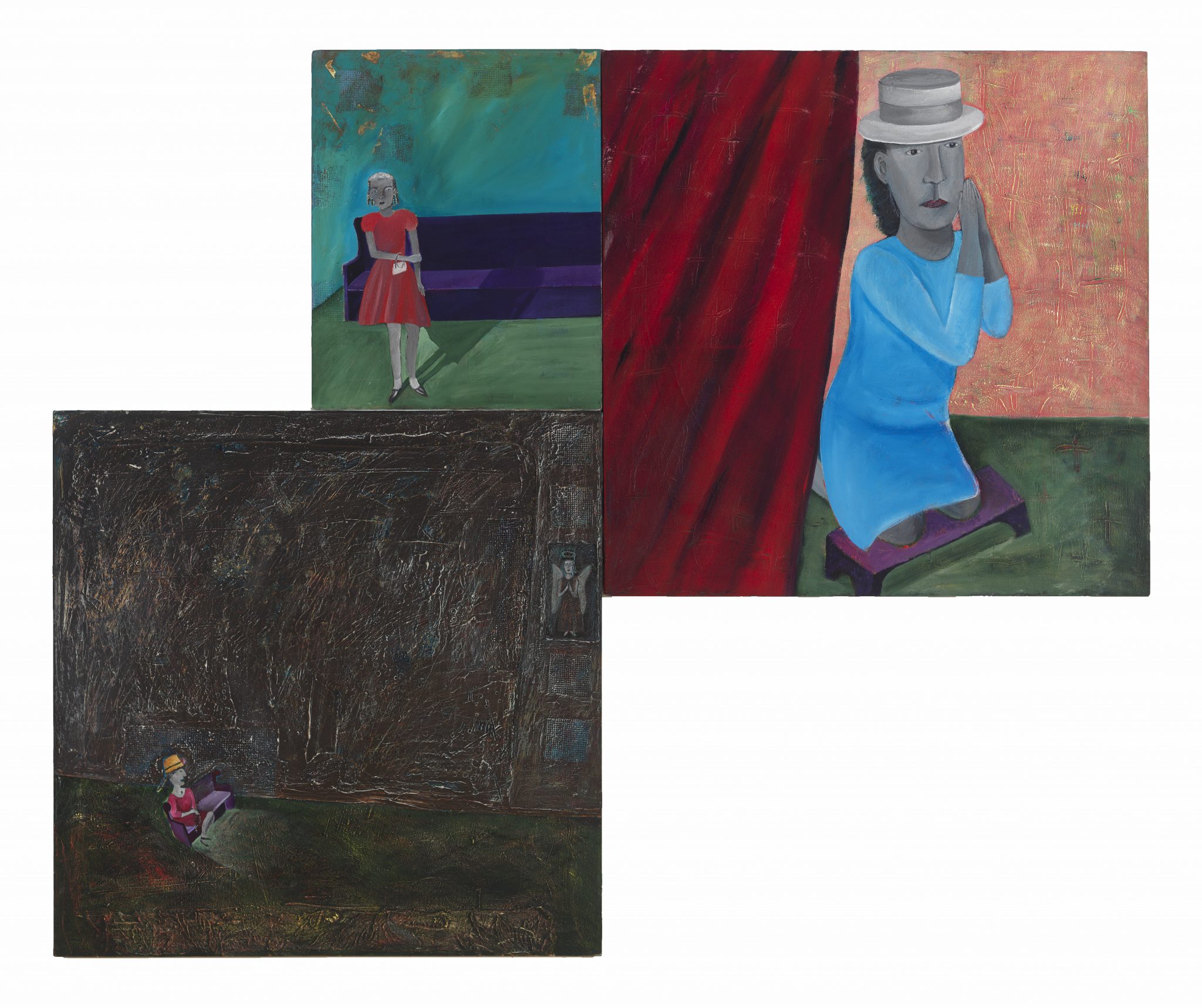 The nineties seem to have been a transitional period, as the artist began to look outward and experiment with materials and ideas. My favorite from this decade is the artist’s interpretation of Cezanne’s “The Bather.” I prefer it to the original! Executed as a collage, Alvarez has made Cezanne’s dumpy, pasty male figure tropical and sexy—while intensifying rather than distorting the original arrangement of planes.

In the aughts and teens, the artist emerged as a versatile painter, conversant with many trends of American art. She is adept at Pop Art ( “Puppy Love”) as well as Geo-Form design (“Rainbows on my Studio Floor”). Throughout, she pursues a decorative visuality that is identifiably Puerto Rican. “Remembering Sol LeWitt” has the kind of predictable, checkerboard grid that the renowned conceptualist could have presented in written instructions. But on top of it, Alvarez has painted an organic, meandering web of her own that would defy any such reduction. That same whimsical sense of form, casual but surprisingly tight, has been painted on the floor boards that wrap around the entire gallery—as well as emerging in every painting. Nothing escapes her tropical efflorescence. In my favorite piece, “Lemonade,” it even erupts from the surface as a three-dimensional flower with brilliant yellow petals.

This exhibit tells the story of someone who managed to fulfill both traditional and contemporary social expectations while continuing to make discoveries and become buoyantly self-assertive. It is the success story of a productive life that is still unfolding. (Chris Miller)