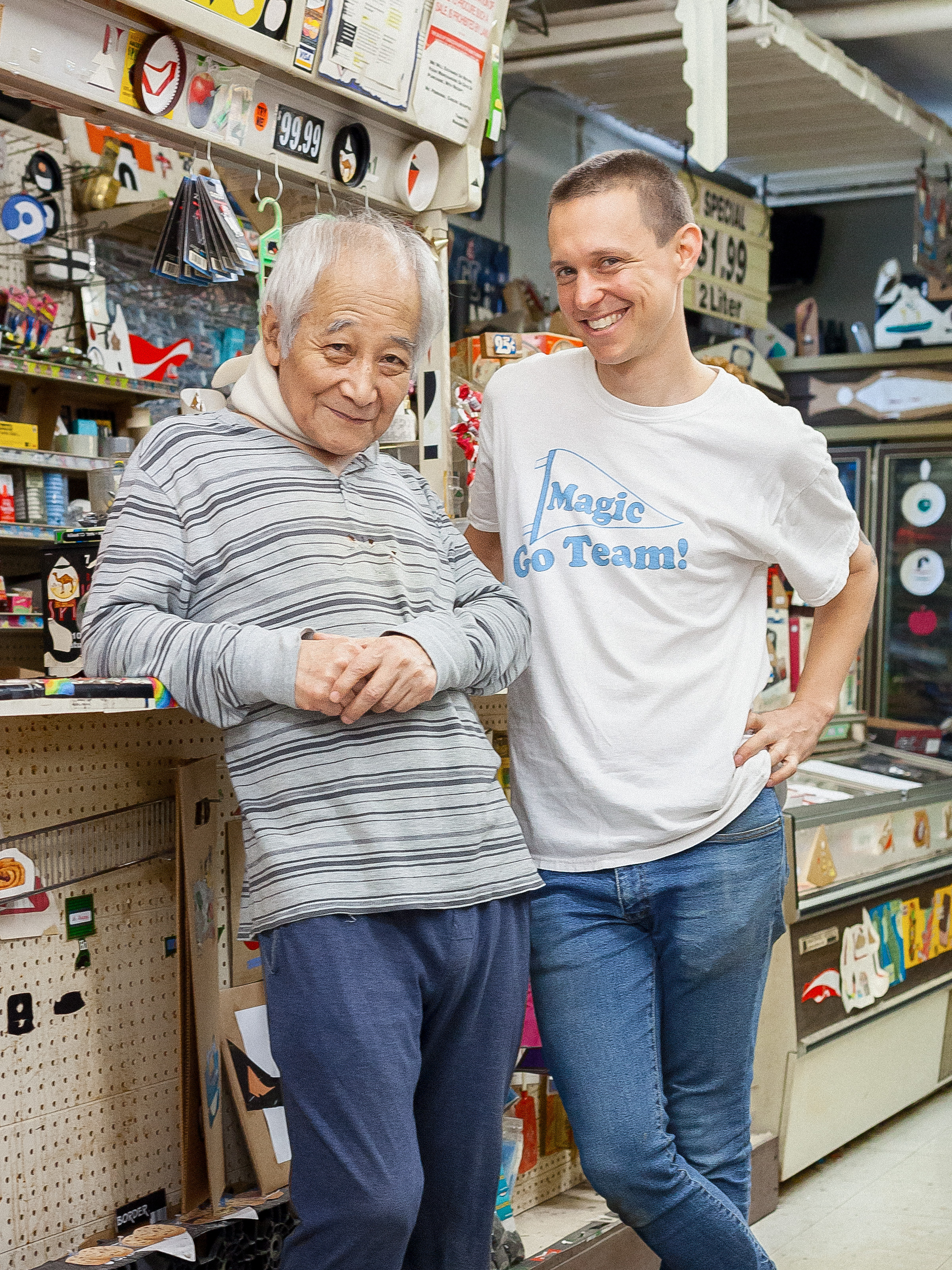 During my recent visit to Kim’s Corner Food in Rogers Park, store owner and manager Thomas Kong stepped outside following a short cloudburst of rain. From there, Kong called to Dan Miller, an artist who has been his constant collaborator for the last three years, to grab his camera and meet him. When Miller emerged from the shop, Kong asked him to snap a picture of a swath of sidewalk bearing the water-stained traces of freshly fallen rain, and he happily obliged. I had come to get a sense of the artistic partnership between Kong and Miller, prepared with questions on the nature of contemporary artistic collaboration, unconventional exhibition spaces, public art, shared labor, and so on. But in this moment, I realized that perhaps I was overthinking it and that the crux of their collaboration could be a simple matter of mutual respect and friendship.

Miller’s approach toward Kong’s work makes that wholly apparent. He is careful not to project too much art-world jargon onto it, but is clearly interested in how Kong’s method and approach could be re-evaluated as a form of radical artistic practice. “He’s the most productive yet happiest artist I know,” Miller tells me. In Kong’s years running Kim’s, he has created thousands of collages using discarded product packaging from the store—Newport cigarette cartons, Little Debbie cakes, Pepsi twelve-pack boxes, etc. For years, Kong has mounted them with glue or tape to cardboard supports and hung them in the store. The artworks dominate the retail space, lining the backs of shelves, plastered to the windows and overtaking their still-for-sale counterparts. And while each work stands on its own, it would seem the project is really the shop itself, a functioning retail store usurped by Kong’s inexhaustible desire to reproduce endless formal variations from the remnants of the products it proffers. Seeing the daily flow of customers coming into the shop to buy soda or cigarettes feels peculiar, like someone doing legitimate grocery shopping inside of a total work of art. 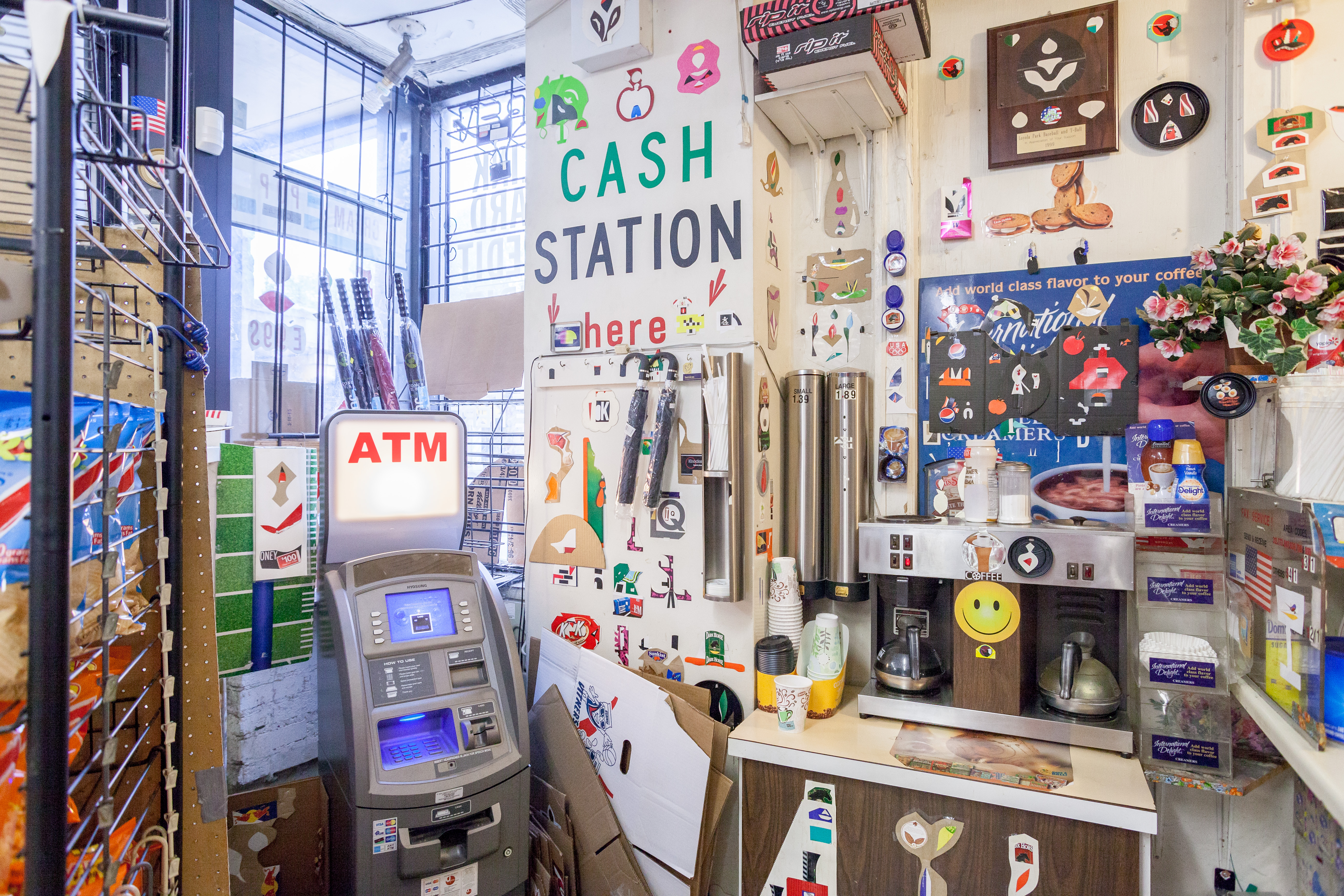 Miller first encountered Kim’s in 2014 after moving to the Rogers Park area from Melbourne, Australia. Initially drawn in, like many others, by the vibrant collages that adorn the windows of the storefront, Kong and Miller struck up a friendship that eventually lead to conversations on modes of collaboration and how to expand Kong’s reach outside of the store. To this end, Miller has organized exhibitions of Kong’s works in Chicago, Portland, Tampa, and even in a solo show at TCB Art Inc. in Melbourne. “I’ve always been wary that the spirit of Thomas’ work might be diluted by its relocations to another context,” Miller says, “and so in any collaborative excursions away from the store I’ve always been guided by his desires. He was really excited about the possibilities of doing a show in Australia, so we did it.”

Miller is not a producer or manager, and for him, this “experimental collaboration” as he calls it, is the locus of his artistic practice, in which the object of artistic inquiry is the indeterminate nature and potentials of the process itself. When Kong proposed the idea of a more standard gallery space, something that Miller would normally avoid, they compromised on transforming the cluttered storage area of the shop into “The Back Room,” an exhibition space and archive for Kong, as well as a place to periodically host works and events from a variety of other artists and makers. “The Back Room evolved from our conversations about what [a gallery] might be, and how it might exist as a sustainable and enriching project,” Miller recalls. “Because of the unusual way in which this art space evolved, and in our deliberately anti-curatorial and low-profile approach in what happens in at least the presentation part of The Back Room, I hope we have actually built something which offers other possible ways of working.” 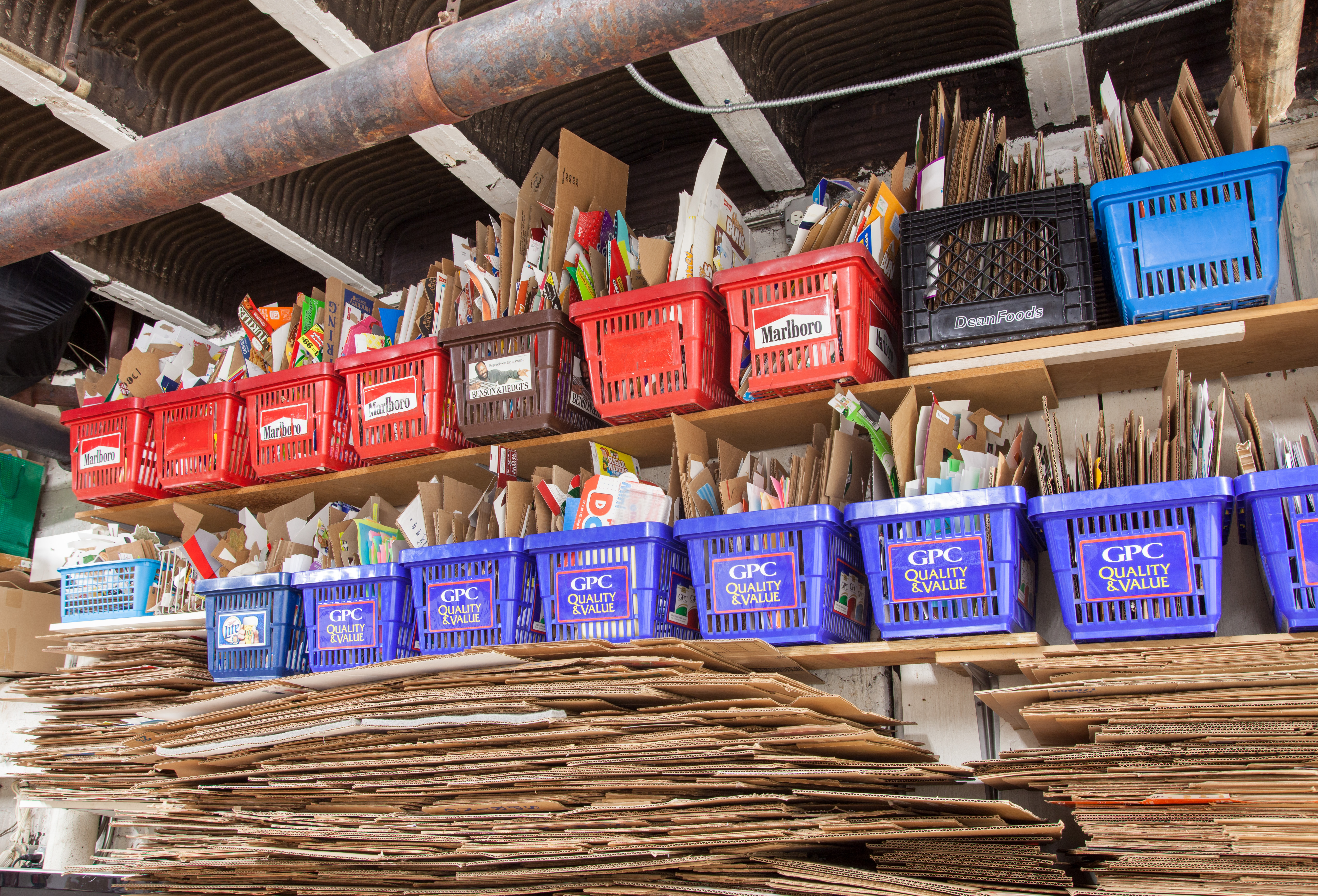 Miller and Kong reach for these generative potentials in alternative models of collaboration with the hope of achieving artistic autonomy through mutual self-recognition. Another Chicago staple, Marc Fischer’s and Brett Bloom’s long-running Temporary Services project, has a similar modus operandi, and it’s no surprise that these two projects have come together. Since 1998 Temporary Services has been producing projects, exhibitions, events, and an extensive library of small, self-published, and easily disseminated publications with myriad collaborations and co-authors. A cursory glimpse through these publications provides an index of dialogical endeavors, many regarding Chicago-based subjects, ranging broadly in topics from interactive album-cover design to prison-reform strategies. Temporary Services isn’t a panacea to entrenched art-world hierarchies, but their brand of affordable objects and intimate and oft-overlooked subjects has a clear affinity with Miller’s and Kong’s projects.

This July, Temporary Services publishes “At Work with Thomas Kong,” authored by Miller and Kong with illustrations by the current Back Room resident artist Ruby T. The publication will be released in the context of Temporary Services’ “Self-Reliance Library”—“an autonomous reading and creating library”—as part of their ongoing “Self-Reliance School” project at Oak Park’s new Compound Yellow art space. The book appears just ahead of the realization of another longstanding project, the painting of Kong’s and Miller’s mural design—proposed to the community in 2015 via an exhibition at Roman Susan, another Rogers Park gallery—on the neighborhood’s Mile of Murals in August. The Mile of Murals has been a Rogers Park fixture since 2008, depicting relevant themes for the neighborhood and inviting local artists and residents to design and paint the murals. Kong and Miller’s mural, titled “Be Happy” after Kong’s personal slogan that appears in many of his collages, will be fittingly painted directly adjacent from Kim’s Corner Food, expanding and enlarging Kong’s project across the street and further into the community. 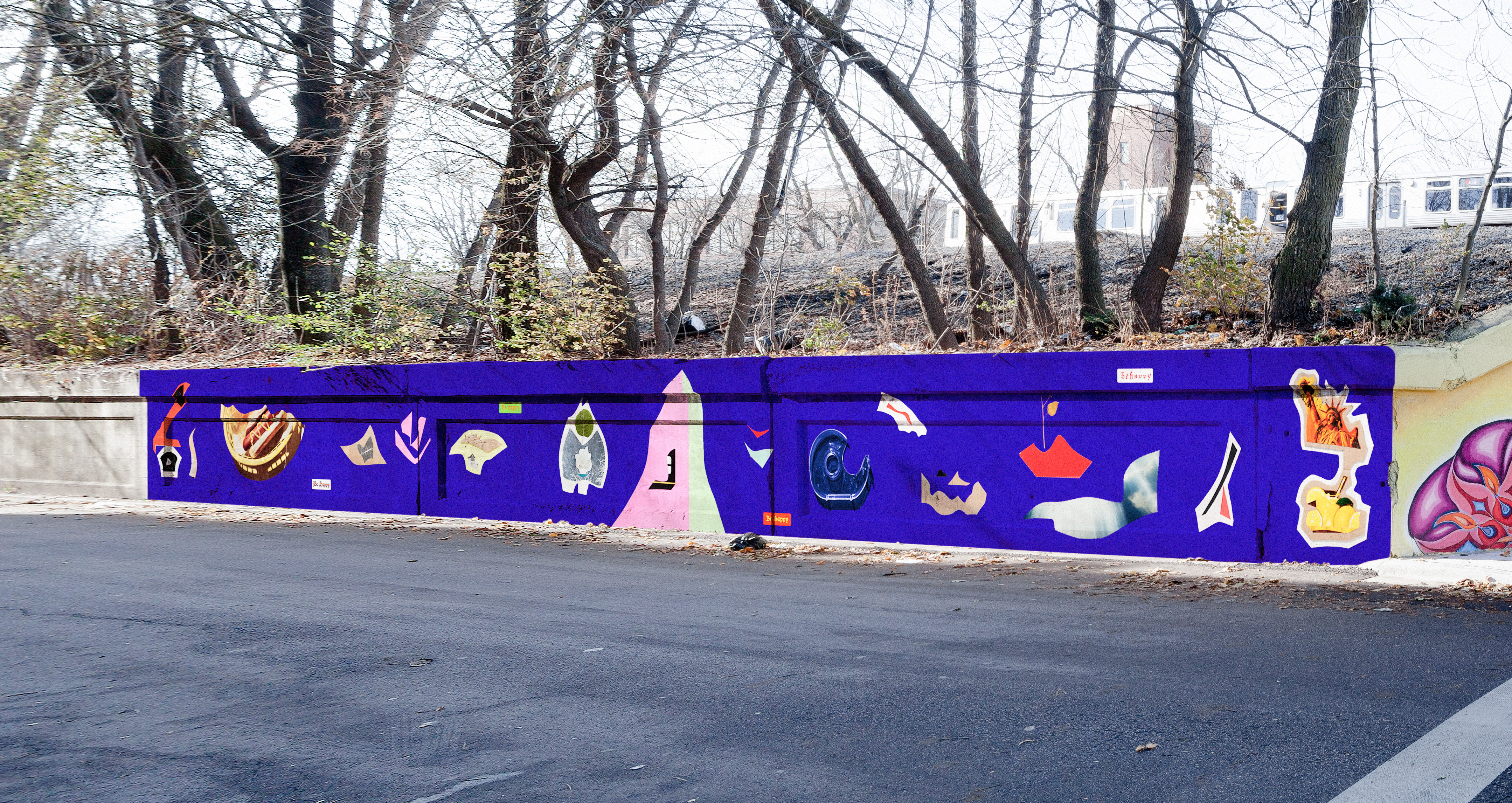 Miller writes, “As I’ve been putting together the publication I’ve been thinking about not just how my collaboration with Thomas Kong and The Back Room might intersect with ideas about building self-sustained communities both inside and outside art, but also how Thomas’ current art practice—using his convenience store as a fully-functional front for an art studio—might actually provoke thinking about possible new models for sustainable creative practice.” These alternative models—white-cube-resistant exhibition spaces, DIY books, public murals—have found themselves subject to scrutiny in recent years, lamented as “New Institutionalism,” a term that maligns alternative strategies as covert redistributed arms of the traditional market. Yet, in the case of this collaboration between Miller and Kong, there is a prevailing sense of mutual support reconfigured as a tactical maneuver, acquiescing their institutional role by addressing the question of what an institution should do and whom it should serve. For now, it would seem Kong and Miller are content in this space, happy to let the products of the process speak for themselves.

Temporary Services launches “At Work With Thomas Kong” on July 22 at Compound Yellow in Oak Park with Dan Miller and Ruby T in conversation with Kate Sierzputowski. The “Be Happy” mural begins August 2017 in Rogers Park, across from Kim’s Corner Food and The Back Room, 1371 West Estes. Ruby T’s “Tenses” shows at The Back Room until July 30.