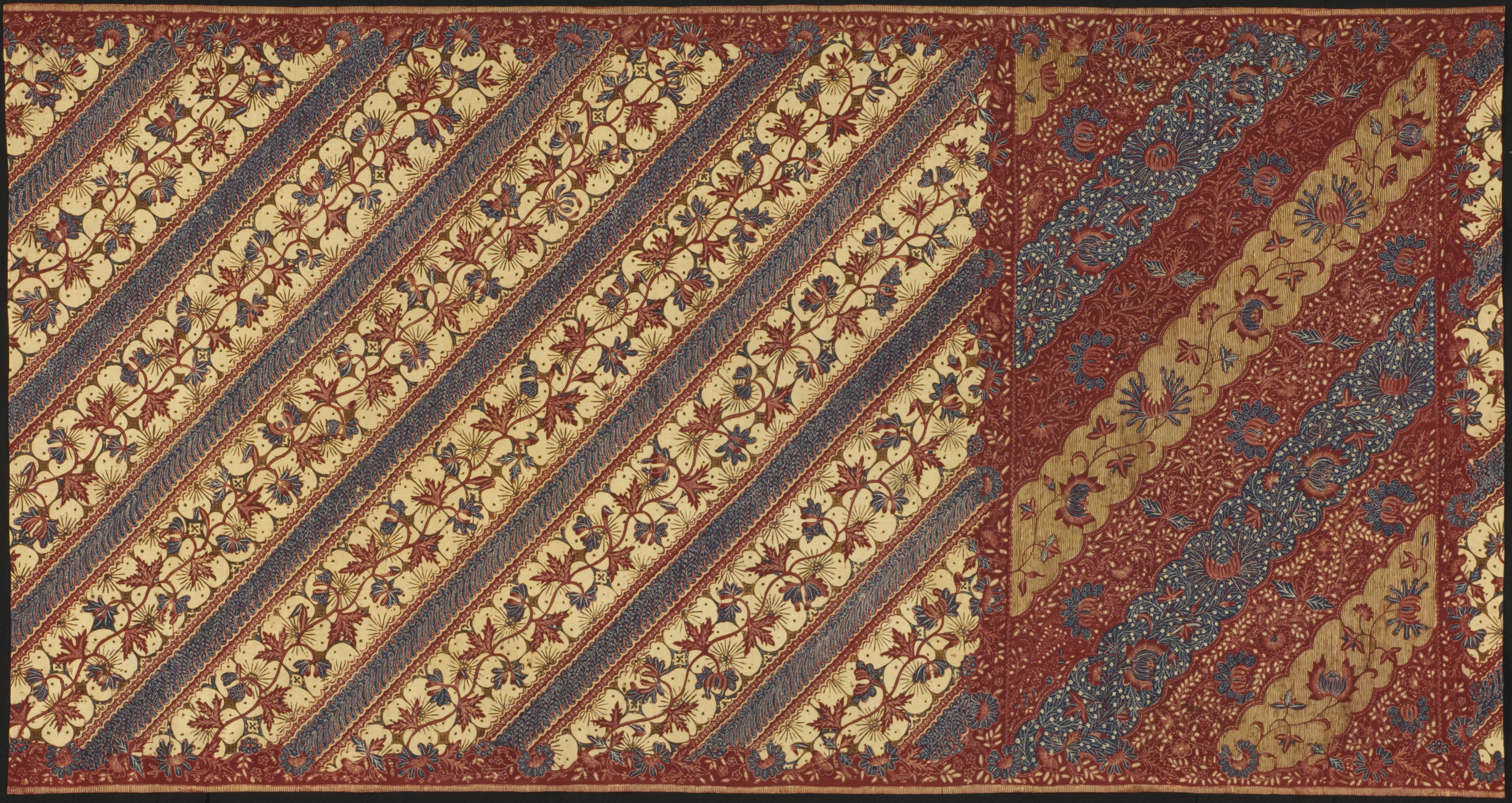 The diversity of batik textiles from Java reflects the proximity of its northern coast to the trade routes between Europe, Arabia, India and China. Today, it may also reflect a shrinking planet, wherein these pieces offer cheerful examples of peaceful coexistence. Java has had so many disparate peoples living side-by-side. Each has resist-dyed bolts of cloth to meet their specific needs while sometimes offering a visual satisfaction that transcends them all.

It’s difficult to pick favorites from this collection of work that dates as far back as the late nineteenth century. Perhaps the most eye-catching is an altar cloth made after 1900 for a Chinese Buddhist temple near Pekalongan. Five dancing lions are set against a flaming red background. You can feel the bouncing rhythm of the dancers as they shake their shaggy manes. Notably, that is the only piece in this collection meant to be laid flat rather than hung from the head, shoulders or hips of a human body. Usually, the areas of detail are more engaging than a graphic sense of the whole.

Some of the finest detail can be found in the dizzying maze of marks in a nineteenth-century head wrap from a central Javanese court. Called “Semen” after the name of the region of its origin, this style of decoration suggests growth and sprouting with stylized stems, flowers, leaves and insects. It’s like falling into the undergrowth of a tropical rainforest. By contrast, Arabian styles feature calligraphy or other Islamic motifs. My favorite of these is a twentieth-century piece from the workshop of H. Mohammed Masina. Reflecting sectarian harmony, it depicts Chinese decorative motifs as well as the crowing rooster of Islam, the Hindu Garuda, and the tree of life puppet from the Indonesian puppet theater. Beneath it all, there seems to be an inner energy just beginning to erupt. In contrast to that heavy tectonic power, Supuan’s 2010 piece depicts butterflies lightly hovering above a field of flowers. Supuan is a middle-school teacher who also runs a small workshop dedicated to preserving traditional Batik techniques.

Some fear that the art of wax-resist dyeing intricate designs is disappearing. Though not as time-consuming as that more meticulous process where every thread is variably wrapped and dyed before woven, it has mostly been replaced by fabric printing. It sometimes takes Supuan’s artisans two years to complete a piece that may get ruined in the process. Only a handful of collectors will pay for such work, including those in the world of high fashion. This is the market pursued by Josephine Komara, an Indonesian textile designer whose fashion label has opened boutiques around the world. Her designers and artisans seem to be aiming for the glamour and perfection of high-end jewelry. The shawl from her label (2011) on display applies a color blending technique not found elsewhere in the show. It’s as luxurious—and as cold—as an exclusive resort.

More enjoyable, for me, are the many earlier pieces where you can feel individual hands and minds at work, carefully dripping each dot of hot wax to create an unpredictable pattern. They convince me that the world—every person, moment and piece of it—is surprising and mysterious if only one takes the time to carefully look. (Chris Miller)

“Batik Textiles of Java” shows through September 17 at the Art Institute of Chicago, 111 South Michigan.