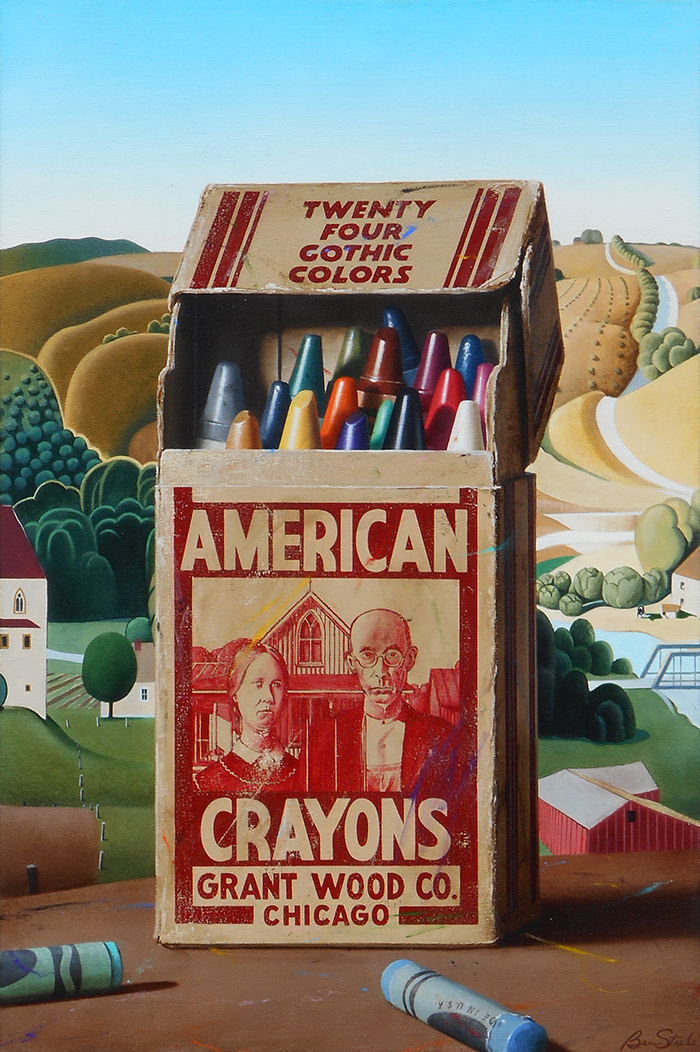 The stated theme of this exhibition is American national identity. I am not as sanguine about this topic as I was eight years ago, so I would prefer to ignore it. But beginning with the pyramids, one national identity after another has been proclaimed by visual art. If the art looks good, who can resist contemplating the history, even when it becomes disappointing?

Ben Steele references works of art in Chicago, though not all of them have been made by Americans. He borrows images from the Art Institute or Millennium Park and recreates them in a more commercial setting. A still life of a ketchup bottle features Edward Hopper’s “Nighthawks” on the bottle label. A facsimile of a 1960’s Etch-a-Sketch presents a monochrome variation of Seurat’s “Grande Jatte.” Like a comedy routine, it’s one rimshot after another. Most humorous is the depiction of Anish Kapoor’s “Cloud Gate” on a can of “CHICAGO BRAND PARK-AND-BEAN.” Most eye-catching is a depiction of Grant Wood’s “American Gothic” on and behind a box of crayons. Steele has a delicious sense of color, luminosity and space and can carefully draw the worn edges of a cardboard carton. His work is masterly as well as clever. But didn’t we already know that in America everything can be grist for the commercial mill? The enduring question is: what else can things be?

Wendy Chidester addresses that question with paintings that represent American industrial goods from the early to mid-twentieth century. They appear to be frontal elevations based on blueprints. But they are more than just catalog illustrations. The curved, radial spokes of a Westinghouse fan provoke a sense of cosmic wonder, as if it might be placed upon an altar and worshipped. The dramatic profile and glowing red undertones of the L.C. Smith typewriter suggest that Raymond Chandler might have used it to write a murder mystery. Bold geometrics and an aging patina transform a child’s pedal car named “Nellybelle” into a tsunami of nostalgia, just like “Rosebud” did in “Citizen Kane.” There’s a mechanical vigor about these objects that pleases by appearing efficient rather than comfortable—a salute to early industrial America. 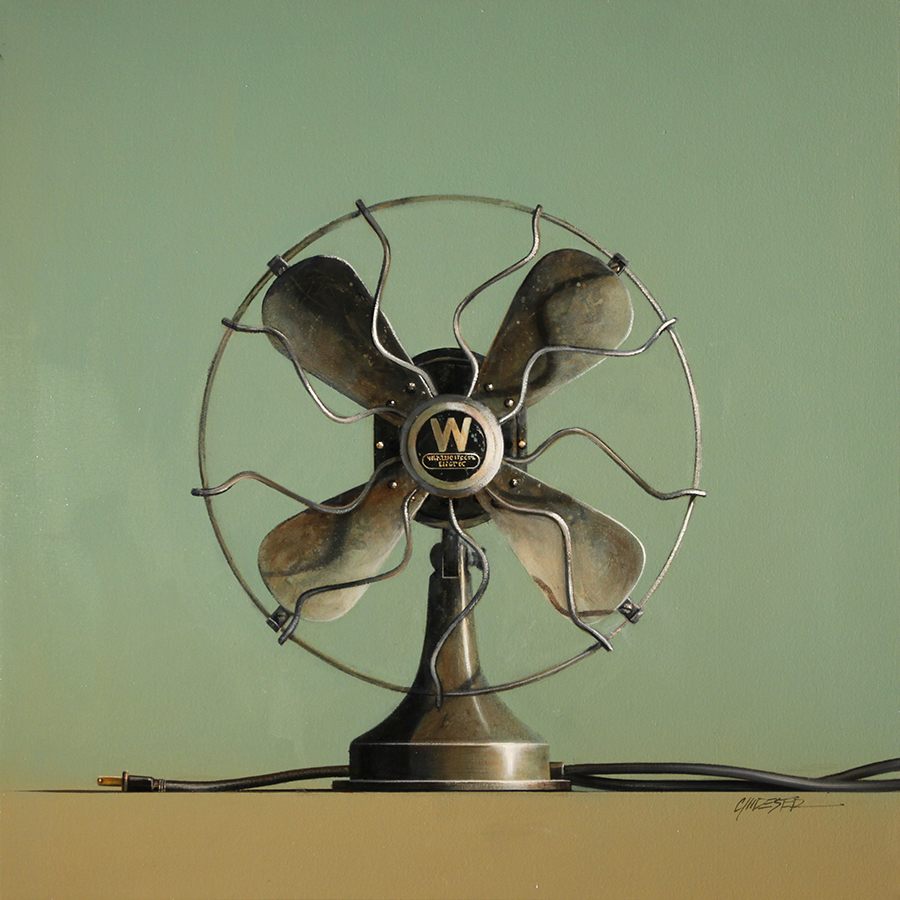 I question why the work of Kimberly Witham was included. She is a taxidermist who collects and preserves road kill and then arranges it with fruits and tableware. When photographed with a strong, even light against a white background, her work resembles contemporary commercial advertising. When dramatically lit against a black background, it resembles seventeenth-century Dutch painting. I can’t see how this relates to being American, but I can see, by contrast, how it highlights the painterly qualities of the other two artists. Elsewhere, Witham has written that she wants to contrast seduction with revulsion, and I can affirm that she has succeeded all too well. From a distance, the overall designs of her Baroque still-lifes are attractive, but up close, the chaotic interaction of form and color is revolting. I can’t stand to look at it. Steele and Chidester, on the other hand, have been well trained to make mimetic details both convincing and beautiful. Both are students of David Dornan who has turned Helper, Utah into the epicenter of an important school of American realist painting. May it live long and prosper. (Chris Miller)