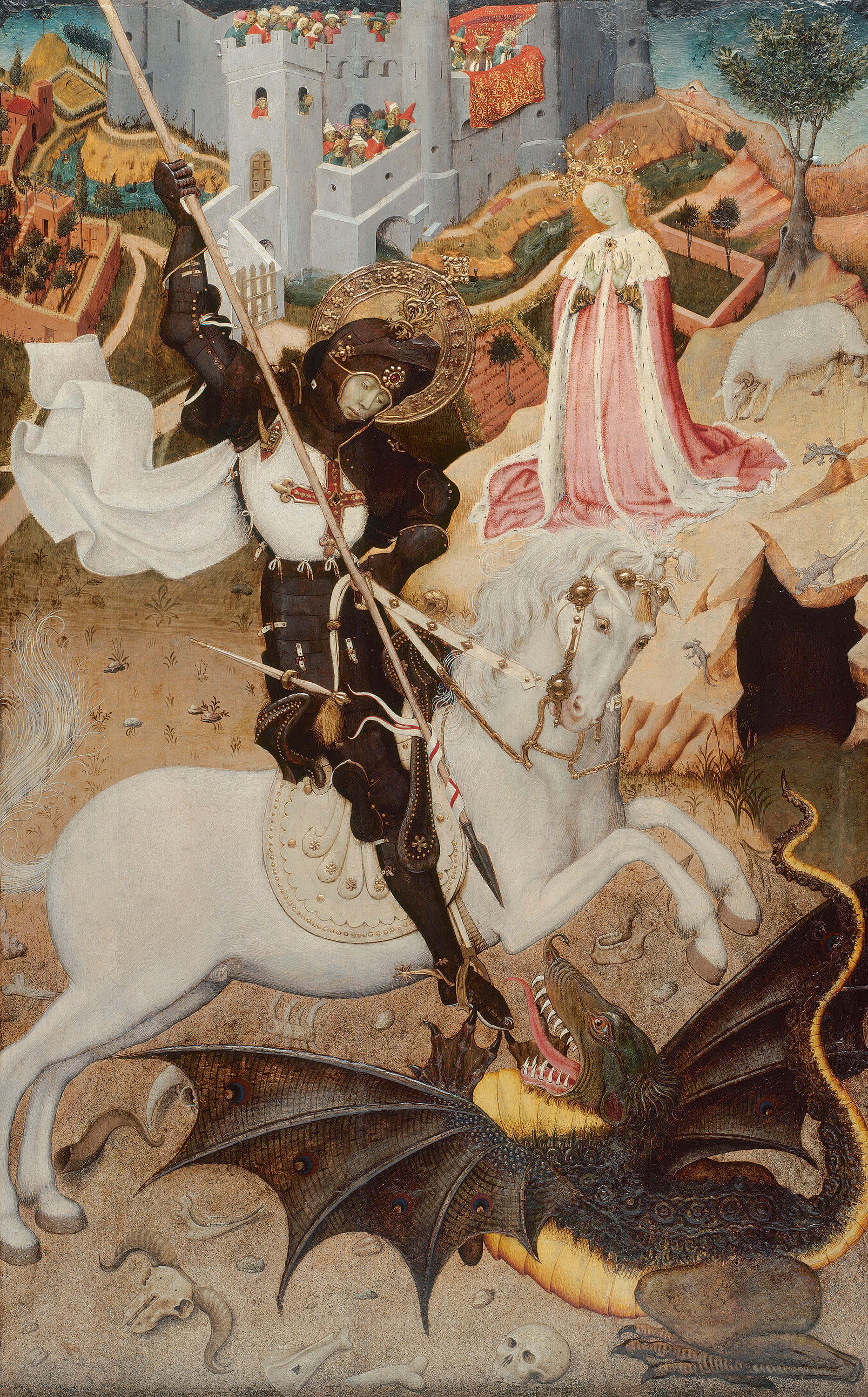 Bernat Martorell, “Saint George and the Dragon,” 1434/35. The Art Institute of Chicago

The new galleries of Medieval and Renaissance Art, Arms and Armor are pretty successful, except for one thing: the arms and armor.

But first the good news. There are fine works in nearly all media, including paintings, prints (engravings and woodcuts), sculpture (in wood, marble, limestone, ivory, bone, silver and gold), ceramics, enamel, tapestry, embroidery and cut gemstones. There are works of vastly different scales, from the small, exquisitely detailed, French “Diptych with Scenes from the Life of Christ,” (c. 1340-60) to the giant, somewhat crudely painted, but highly expressive “Retable and Frontal of the Life of Christ and the Virgin Made for Pedro López de Ayala” (1396).

There are works by artists you probably know, such as Albrecht Dürer and Lucas Cranach, and many by artists you probably don’t, or whose maker is unknown. Among the latter, I’d direct you to “The Embroidered Altarpiece for Bishop Pedro de Montoya” and “Altar Frontal Depicting the Resurrection and Six Apostles” (c. 1468). Created for an itinerant bishop, the two giant textiles—which can be folded and packed—are made of wool, silk, gold and silver threads, as well as seed-pearl and other precious and semi-precious materials. Most of the principals, including the Virgin and Child in the middle, are tufted to give the appearance of sculpture in low-relief, and the treatment of the embroidered textiles worn by the holy protagonists—illusionistic embroidery made of embroidery!—reveals a self-consciousness and wit surprising in such a sacred object. The curatorial dramaturgy is good here too: in order to protect the work from fading, it’s only illuminated for five minutes every half-hour. When the lights go on, the waiting viewers let out a collective “Ahhh!” 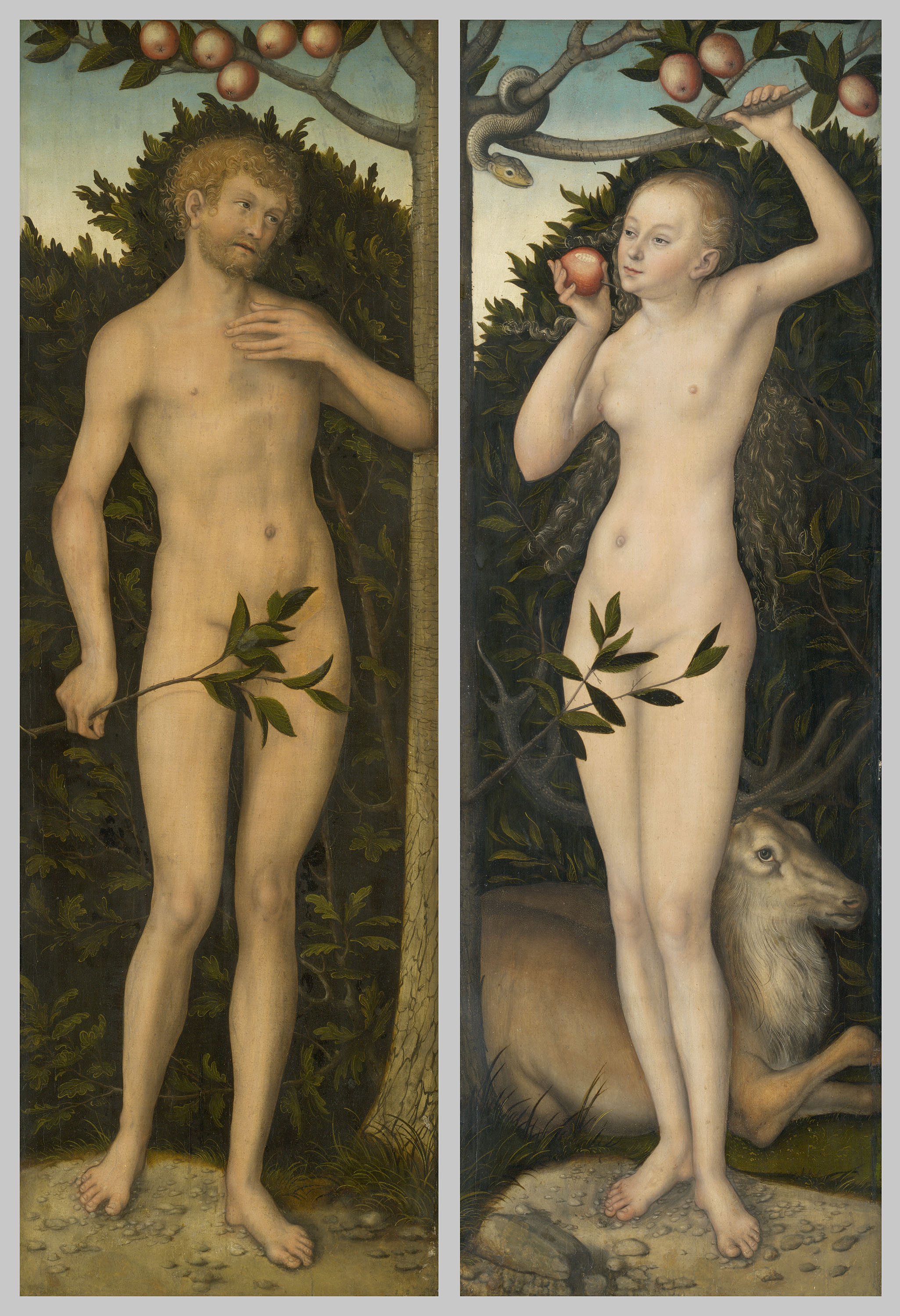 Other outstanding works in the new Deering Galleries include the over-life-size “Head of an Apostle” (c. 1210) from the Cathedral of Notre Dame in Paris, probably knocked off its body by a revolutionist from 1793; and a wooden “Reliquary Bust of St. Margaret of Antioch” by Nicolaus Gerhaert. She is shown, for some reason, cradling a bullfrog, though her attribute is a dragon. According to the legend, she was swallowed by Satan in the form of a dragon but was thrown up when the cross she carried irritated the beast’s gut.

And then, after passing through additional galleries of early Renaissance religious painting, ceramics and a small treasury with gold and enamel jewelry, the visitor finally reaches the main attraction: the two galleries of weaponry. Arms and armor are a problem for museums. Visitors love them, especially kids, but curators know the backstory: In the United States, they were largely collected during the Gilded Age by rich white men who celebrated chivalry and knighthood. And that raises awkward questions about race, gender and politics that most museums are loathe to broach. 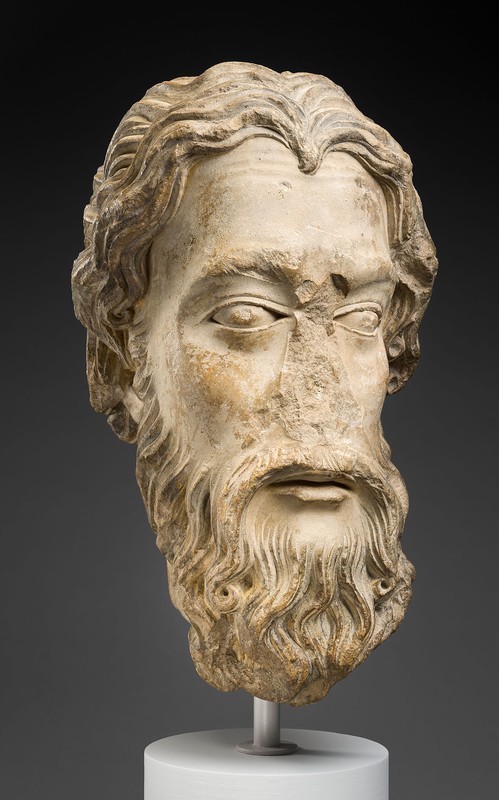 Chivalry was an informal code of conduct that arose among feudal nobles beginning in the twelfth century. It endorsed real and ceremonial violence—warfare, hunting, dueling and jousting—and the control of women. In pursuit of honor, wave after wave of knights in armor attacked and killed Muslims and Jews in the Middle East and Europe from the twelfth to sixteenth century. In the name of chivalry, knights fought each other for the favors of women who, once won, were valued as breeding stock. Noble women had more rights than peasant women, but they were still controlled by men, and the most popular chivalric tales make it clear that women were chattel. The story of Guinevere, wife of the mythic King Arthur, is paradigmatic: according to the various chroniclers, she was kidnapped, raped, seduced, rescued, abducted again, imprisoned in a castle with snakes, sent to live in a nunnery, and burnt alive.

Chivalry has long been a cover for reactionary politics. When the Irish-born, English politician Edmund Burke wrote in 1793 “the age of chivalry is gone,” he was not lamenting the loss of good manners, but grieving the execution of Queen Marie Antoinette of France and the end of feudalism. He continued: “Never, never more, shall we behold that generous loyalty to rank and sex, that proud submission, that dignified obedience, that subordination of the heart, which kept alive, even in servitude itself, the spirit of an exalted freedom!” Serfs and slaves, Burke argues, were once happy and free in their servitude. 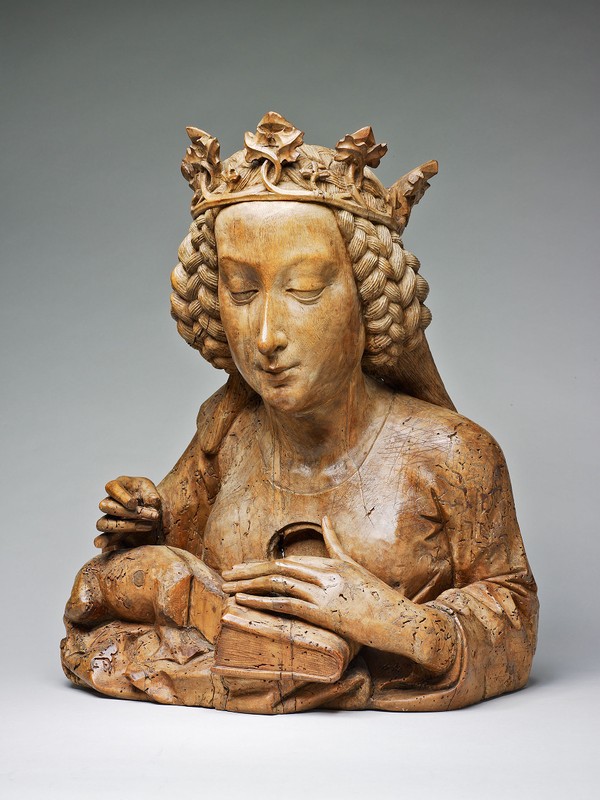 So it’s not surprising that chivalry was revived as an ideal in the American South during the Civil War and Reconstruction. The Ku Klux Klan, formed in 1868, endorsed “the institution of chivalry” in its founding document. In D.W. Griffith’s film “Birth of a Nation” (1915), Klan members are shown dressed in light armor emblazoned with a Jerusalem (or Crusader’s) Cross. In 1964, the White Knights of the KKK were responsible for the infamous murders of the civil-rights workers Andrew Goodman, James Chaney and Michael Schwerner; and the group still exists in much-reduced numbers. David Duke once described them as “chivalric.”

Gilded Age gentlemen in New York, Cleveland and Chicago, whose wealth and generosity established important collections of arms and armor, were not Klan members. Nor were they royalists, or notably more racist than others of their class. George F. Harding however, whose collection is the basis for the Art Institute’s holdings, did own Marie Antoinette’s harp—the one she must have played while starving peasants ate cake. Harding also served for ten years in the Chicago City Council where he was called “the millionaire’s alderman,” and was Illinois representative to the National Republican Committee in 1936. When he died three years later, his extensive collection of armor remained in the Gothic Revival stone addition to his Kenwood home, where it served as a museum until a series of financial and legal issues pressed its chairman to donate the entire collection to the Art Institute, the full transfer of which was completed in 1989. At that time, his bequest was installed in Gunsaulus Hall, the low building that bridges the Illinois Central train tracks, where the objects were, according to my recollection at least, crowded together and dimly lit. Now the goods have been moved to a pair of new galleries on the second floor, the culmination of the Deering Family Galleries of Medieval and Renaissance Art, Arms and Armor. 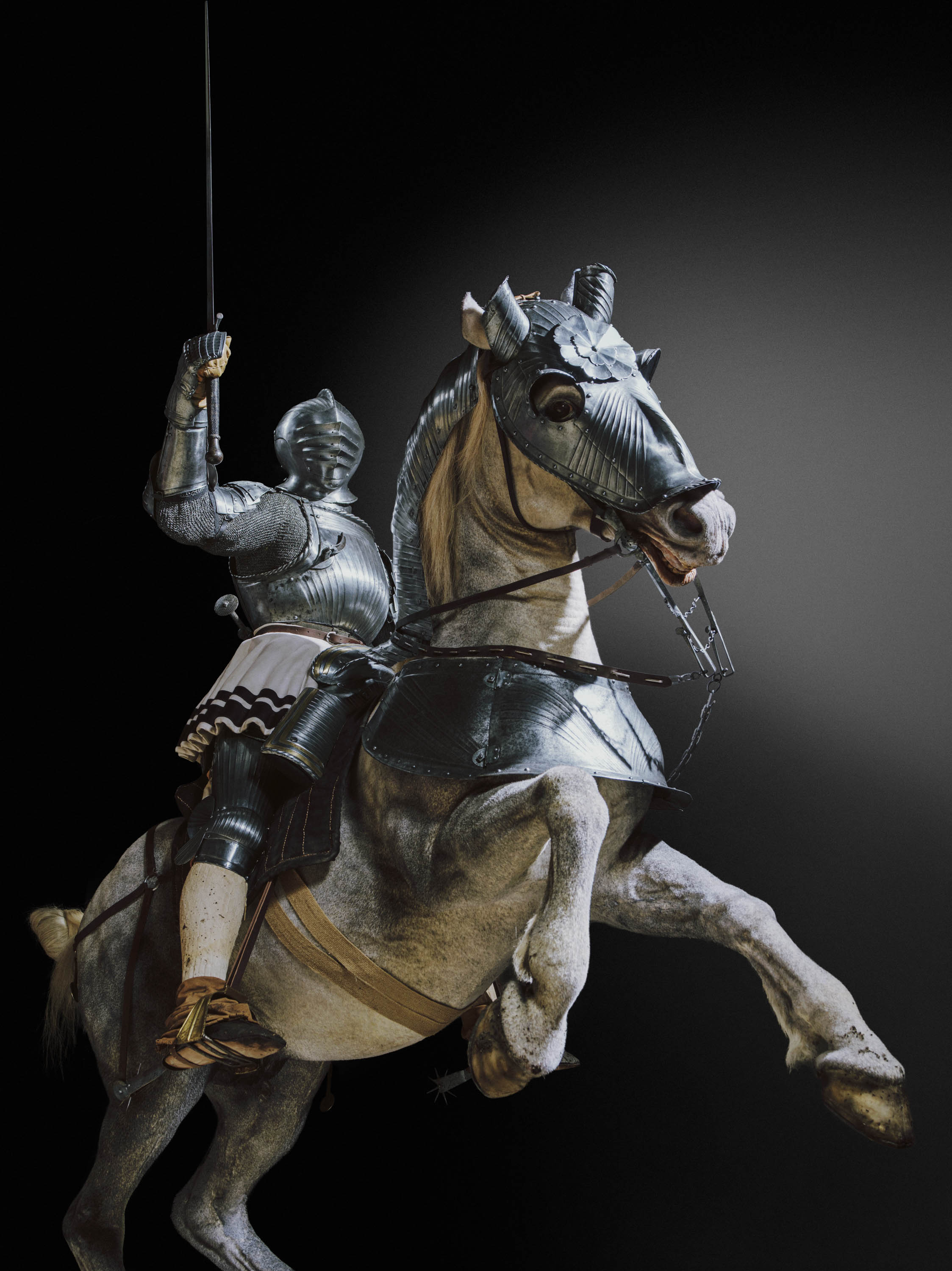 The first gallery, rectangular and high-ceilinged, with glass wall cases all around containing armaments, features a life-size knight on horseback beside another knight in full jousting regalia. The horses they bestride are very life-like, with plausible coats and manes, and even bits of mud caked on their hooves and legs. I kept checking the floor for piles of manure. A computer monitor destroys the illusion however in order to tell us the names for the parts of costume, armory and tack.

The final, narrow oblong gallery is given over to weapons of all kinds. I learned the difference between the cuirass, halberd, rapier, broadsword, pike, cutlass and dagger, and the many types of early guns. My favorite was the “Wheelock Puffer” (possibly of Christian II, c. 1580), an early example of the self-igniting pistol, with a wheel like that in a cigarette lighter. Its trigger was hard to pull, it misfired often and was difficult to aim—an ideal weapon for the Chicago police. But what I didn’t learn, amid the pageantry of the new galleries of arms and armor, was very much about warfare (real and simulated), state versus private violence, feuding, death and injury from dueling and jousting, the formation of armies, pogroms, rebellions, armories, metalsmiths, gun merchants, or chivalry and its uses. Nor did I learn much, apart from a perfunctory panel of text, about how this peculiar collection came to be formed, the life and interests of its donor, or the peculiar American story of arms collecting. Any of that—in discrete wall labels or intrusive computer screens—would have enhanced my understanding, and broken through the dark shadow cast by chivalry.