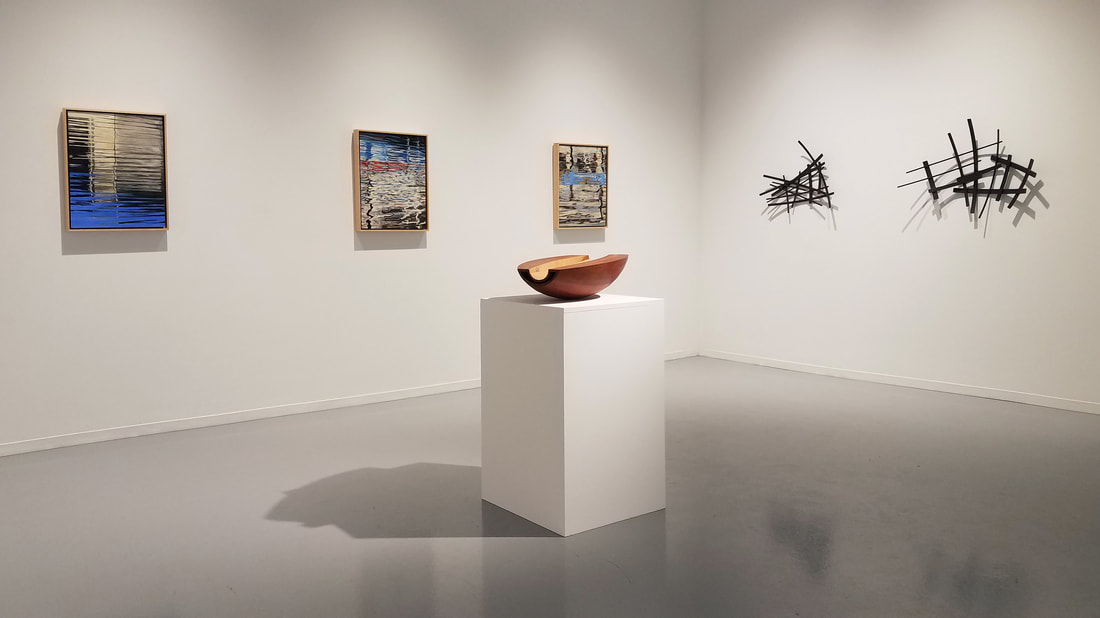 Installation view of “Chicago and Indianapolis – What’s the Connection?” at Zolla/Lieberman Gallery, Summer 2017

What connects Indianapolis to Chicago other than Route 65? What do their living artists have in common? That’s the question that two collectors, Christopher Slapak and Michael Robertson, a couple who have homes in both cities, have addressed with this selection of art made by faculty of Indiana University’s Herron School of Art and Design.

Most of the major trends in Chicago art and art education are absent. None of the pieces raise issues of gender or racial identity. None of them apply cartoonish figuration—indeed there are no human figures depicted at all. None of it references Surrealism or Dada. None of it is primarily conceptual. None of it is provocatively crossing the border from art to non-art.

Perhaps this is because Indianapolis is a more conservative city. Politically, the state as a whole has been more inclined to serve the interests of large corporations rather than wage earners. Culturally, it appears to be about sixty years behind Chicago. This selection might exemplify Moholy-Nagy’s Institute of Design back in the 1940s, especially the white geometric floor sculptures of Andrew Winship and the tight, sinuous ink designs of Melissa Parrott Quimby.

Most of this show is pleasant, personal, highly crafted and quirky. Ray Duffey scavenges used lumber and repurposes it into elegantly crafted constructions that exemplify sensitivity and self-reliance. His work is well complemented by Reagan Furqueron, another wood worker, who conglomerates sticks into bold, flat patterns placed on the wall instead of the floor, with energy that pushes out instead of pulls in. 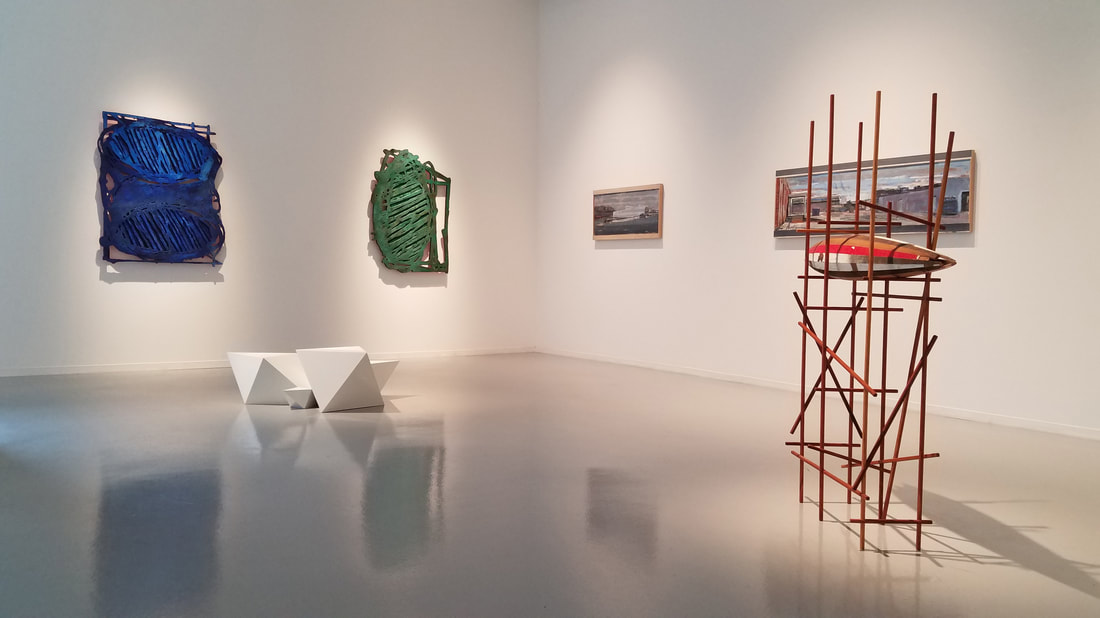 Installation view of “Chicago and Indianapolis – What’s the Connection?” at Zolla/Lieberman Gallery, Summer 2017

The two representational painters also complement each other. Marc Jacobson offers three exterior views of a dollar store, that fixture of low-income life where stuff is dirt cheap and worth even less. Other painters have found beauty in horizontal bands of leaden skies, low-slung buildings, and gray parking lots with occasional flashes of primary color. But Jacobson sets a mood of grating desolation and despair, even though his paintings are carefully balanced. Valerie Eickmeier depicts similar modest, functional architectural structures, but all we see are their dissolving facades as reflected on the rippled surface of flowing water. Her urban Indiana is being washed clean and renewed. I might almost want to live there.

The most celebrated artist in this collection is Pakistan-born Anila Quayyum Agha. She’s the only artist to sweep both the public and the juried grand prizes at the Grand Rapids ArtPrize. Though not a practicing Muslim, the geometry and radial symmetry of her designs references the golden age of Islamic architectural ornamentation. Her work is less exciting. It’s not as lush and dynamic, but it does exemplify a kind of perfection as it creates a peaceful, meditative, prayerful space. Agha could probably teach art in Chicago or anywhere else, but her quiet, carefully crafted work is an especially good fit for Indianapolis and an art school that places greater emphasis on pleasant design than on confronting and changing the world. (Chris Miller)