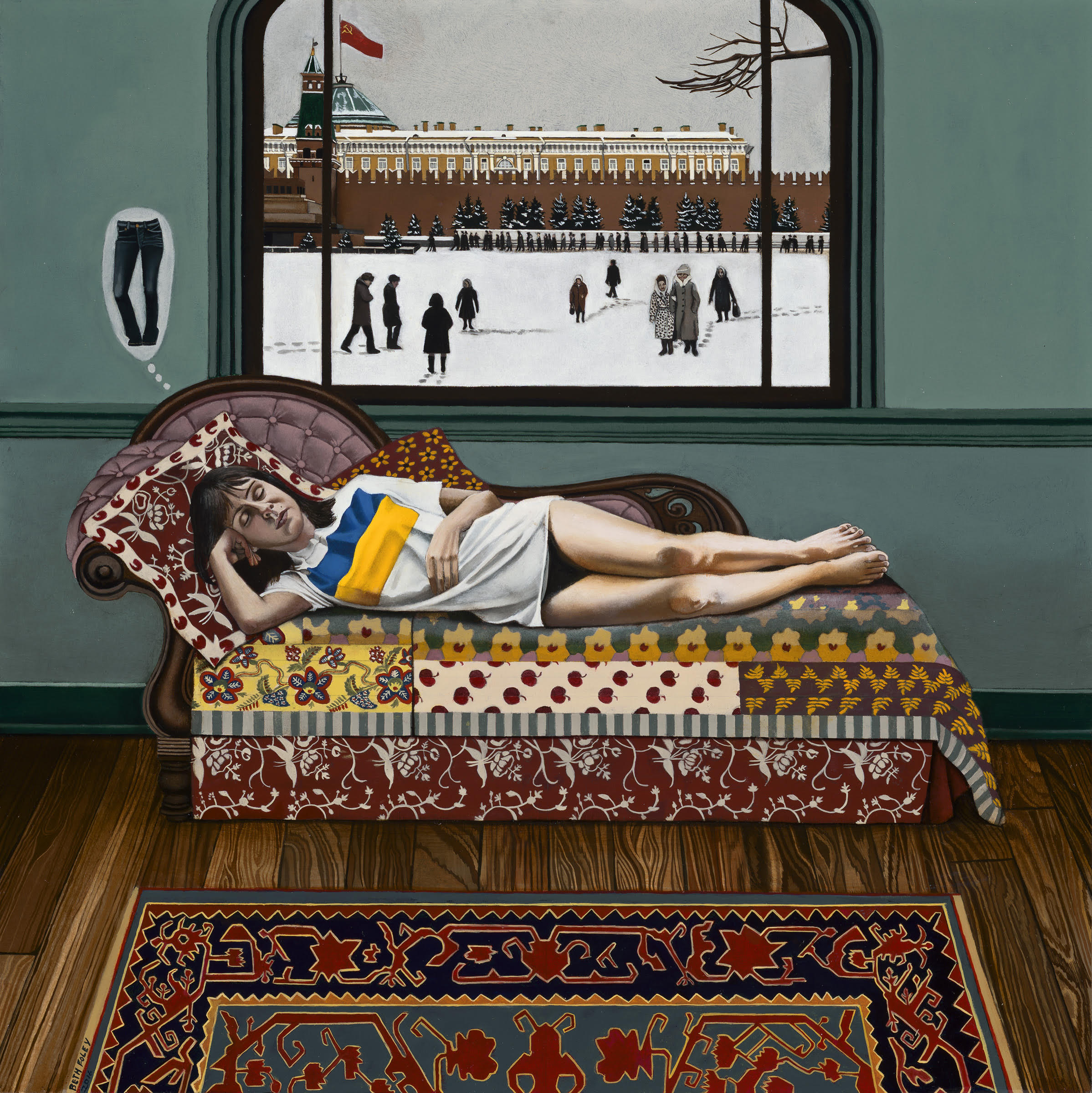 Victor Armendariz has gradually been rolling out his roster of artists, one batch at a time, ever since he opened his new gallery in March. This exhibition of seven artists is called “Distortion,” but don’t expect that word to come to mind when viewing this show. Perhaps the title was chosen because none of these artists paint directly from life but rather from dreams or fantasies.

All but one of these artists have been carried over from the gallery’s predecessor, Ann Nathan, and continue her emphasis on pictorial virtuosity. They do not challenge the definition of art with impetuous self-expression or tedious banality. They also do not pursue academic investigations or invoke middlebrow sentimentality. Mostly, these artists seem thrilled by how ideas can be expressed.

Ben Duke’s large paintings overwhelm the viewer with too much energy and too little focus. The loosely drawn narratives feel like storyboards for a comedy about the freewheeling street life of an American college town. It’s shallow, confusing and vapid, but teeming with youthful possibilities.

The other three narrative painters create more private and adult worlds in smaller, tighter paintings. Mark Bowers’ world is painful to enter. His cityscapes disorient the viewer with jarring colors, clutter and conflicting spatial clues. Chicago Surrealist Seymour Rosofsky would probably feel right at home with these works. Bowers establishes emotional and critical distance by placing his views upon a stage from which a curtain has been drawn. The mysteries and puzzles presented by Beth Foley are more visually appealing. They feel like erudite parlor games, with occasional references to famous writers (Salman Rushdie) or artists (Botero). I especially enjoy how she has imagined a Russian interior with intense floral patterns on the sofa and a window opening onto a snow-covered Red Square.

Oliver Benson, formally trained in both Tibetan Thangka and Byzantine icons, presents his own whimsical iconography with the rubbery figuration and cartoonish graphics of an interactive video game. Far more bizarre, but also far more attractive, are the wacky scenes painted by Christopher Klein, a former scientific illustrator for National Geographic. In one fantasy, planet earth is ruled by giant bats who have discovered a human encased in amber amid the ruins of a country estate. The logic is mind-numbing but the painting rivals both the precision and the overall excitement of “St. Francis in the Desert” by Giovanni Bellini. 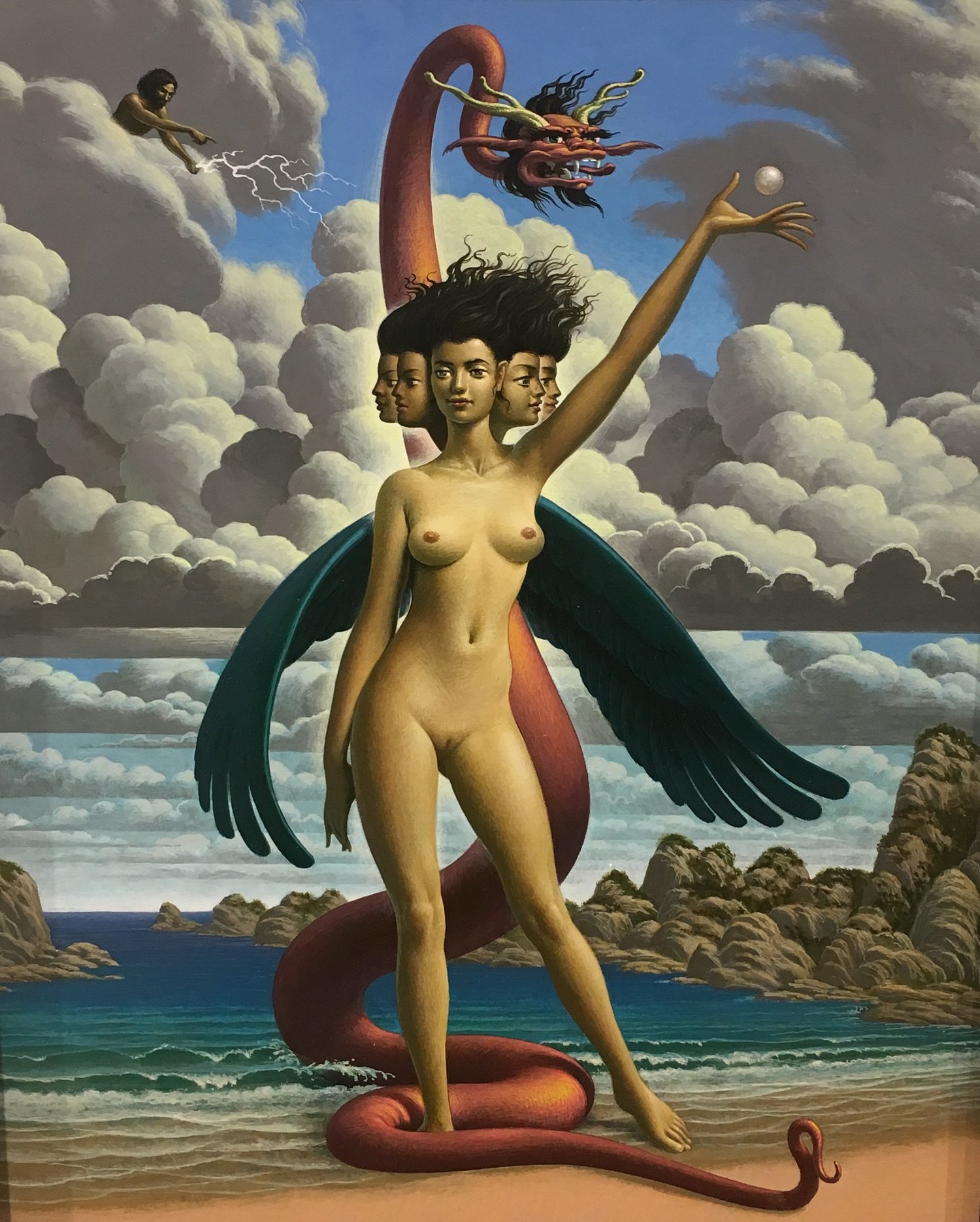 Neither of the two abstract painters offers anything that attractive. Jan Pieter Fokkens covers his paper or canvas with a dense maze of colorful marks that would probably look better on a video monitor. I’m also puzzled by the sinuous swirls executed by Richard Gibbons. They remind me of the monumental florals painted by Georgia O’Keefe, but they feel more like two colors of house paint dumped together and stirred.

There is plenty of technical virtuosity in this show and a few flashes of intense beauty. But there is no moral weight. There is no sense that human destiny has been seriously considered. Indeed, the topic seems to have been carefully avoided except as a joke. And I want more from good painting. (Chris Miller)