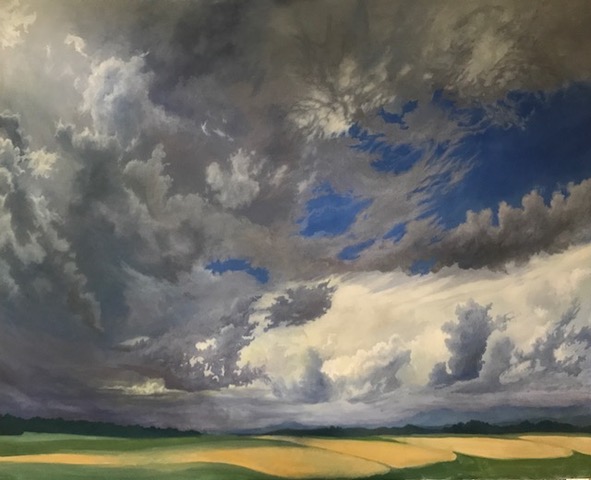 Creativity is ubiquitous. While working on an art project in Baraboo, Wisconsin, Susan Attea encountered a vibrant Wisconsin art community. She has brought four of its artists back to her gallery in Pilsen, and there are several surprises here.

Sara Strozinsky makes the kind of watercolor nature studies that are likely found in the competitive exhibitions of watercolor societies. Nature is presented as squeaky clean and well-ordered. Her pieces are pleasant and well-crafted, but beyond that, they have a vibrant intensity that borders on the compulsive. She now specializes in leaves of grass with an overall sharpness and clarity that feels more like engraving than watercolor. And indeed, she cuts into the paper to bring out its brightness beneath the maze of sharp, twisting foliage. A million things appear to have been done as well and quickly as in a well-kept kitchen. Emphasizing that domestic feeling, her best piece presents a robin sitting in its tangled nest. Wildness is under tight control and domesticity conquers all.

As a younger artist, Katie Schofield reflects the more conceptual bent of current art education. She has crumpled and tied old newspapers into tube-like structures that immediately made me think about cliff swallows. I’ve often seen their nests bunched together beneath bridges over Midwestern rivers. Mine is a happy memory, and it is enjoyable to think about how these elegant creatures have repurposed clunky human constructions just as she has repurposed newsprint. Excepting that personal memory, the pieces were no more visually interesting than a grayish lump of sacks piled on the floor.

Another young artist, Laura Annis, appears to have developed her practice out of an enthusiasm for a genre of popular art. With training in animation, she has applied that quick, smooth, linear approach to dramatic figuration. She has a steady hand and a facility with carving and welding as well as painting. The results feel more sincere than commercial as she deals with themes like broken hearts and heroin abuse, but they also feel tacky, disposable and adolescent. Her facility with materials is way ahead of her sense of mass, line, color and formal structure.

The most remarkable artist here is the Dutch illustrator Anne Horjus. His inner child seems to have never lost that dreamy sense of wonder and curiosity that characterizes his illustrations for children’s literature. It’s not a genre to which I have ever related, even as a child. Specifically for this show, he has painted something completely different: two wall-size skyscapes that seem to have leaped straight out of the Dutch Golden Age. They summon that sense of celestial awe so easily associated with divine revelation. They come from a time in European history when faith drove armies, and I might almost have signed up. Horjus is a versatile artist. Possibly he will never paint the swirling clouds of a luminous Baroque sky ever again, but I wish he’d make it his specialty. (Chris Miller)