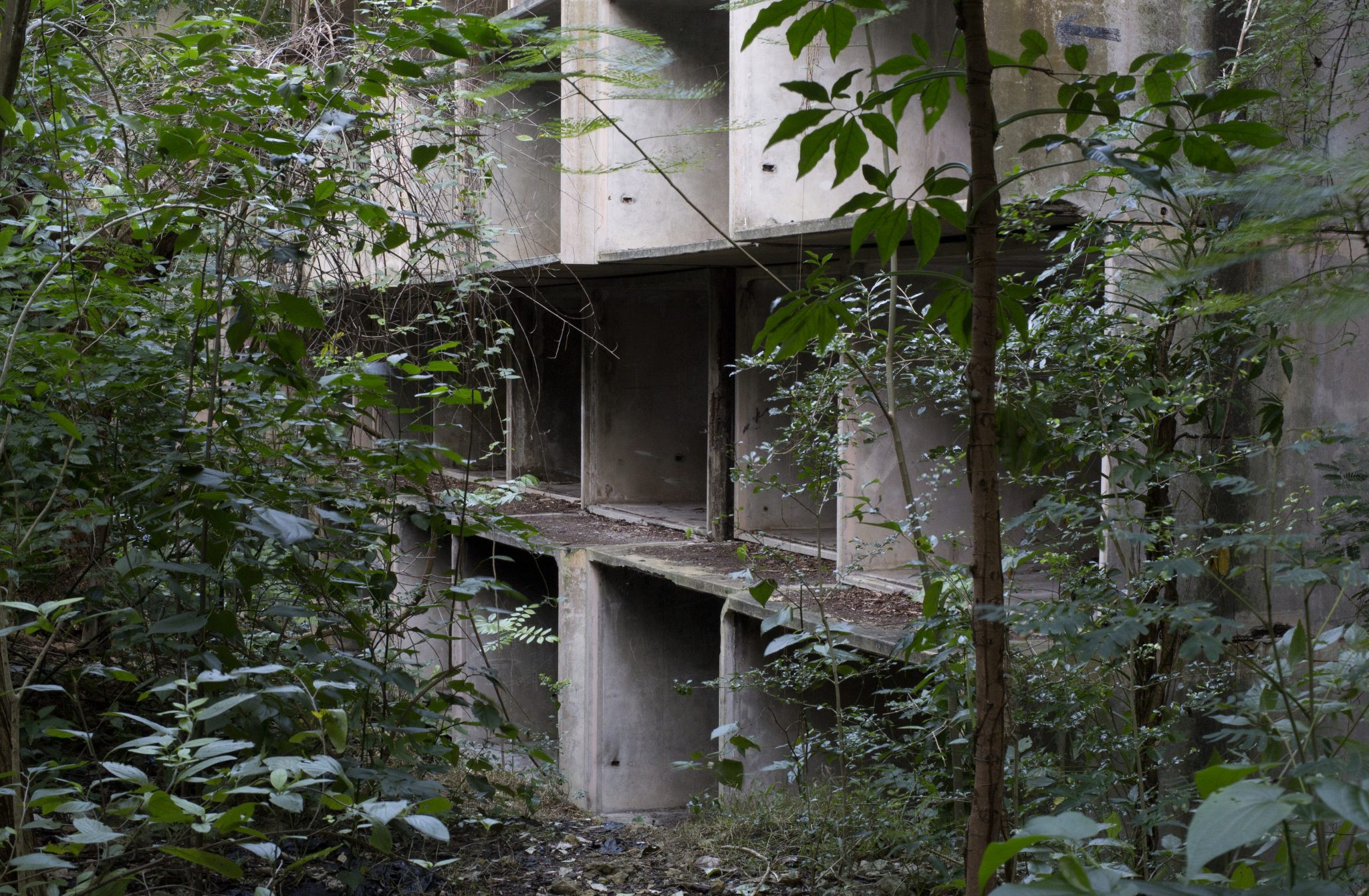 David Hartt, “Carolina I,” 2017, archival pigment print mounted to Dibond, print size 36 x 54 inches. Courtesy of Corbett vs. Dempsey and commissioned by the Graham Foundation for Advanced Studies in the Fine Arts

David Hartt is an artist formerly from Chicago and currently based in Philadelphia. His work combines photography, film and architectural installations to explore social, political and economic histories. Hartt, who will be sharing in this year’s EXPO /Dialogues, spoke with Newcity about his most recent project, “in the forest,” a film exploring the remnants of the failed Habitat Puerto Rico project designed by Moshe Safdie in the late 1960s in San Juan, Puerto Rico. This work will feature in his exhibition at the Graham Foundation in partnership with the Chicago Architecture Biennial.

Tell me about your film, “in the forest.”
It takes place in Puerto Rico and relates to both the history of Safdie’s Habitat Puerto Rico and different sites scattered around the island. The film begins in the urban park Bosque Urbano de San Patricio, which was the original site for Habitat Puerto Rico. The project actually didn’t go ahead there, but my initial attraction was to this site.

I have a wonderful Safdie publication called “For Everyone A Garden.” The book details a number of his projects including Habitat Puerto Rico. There’s this photograph, an aerial shot of the initial site, which has the Borinquen Towers to the left, and the commercial plaza in the foreground, and in the background is this forested hill. I decided to go back to that historical image just to see if I could actually find the site itself. I used Google Earth to find that exact vantage point. 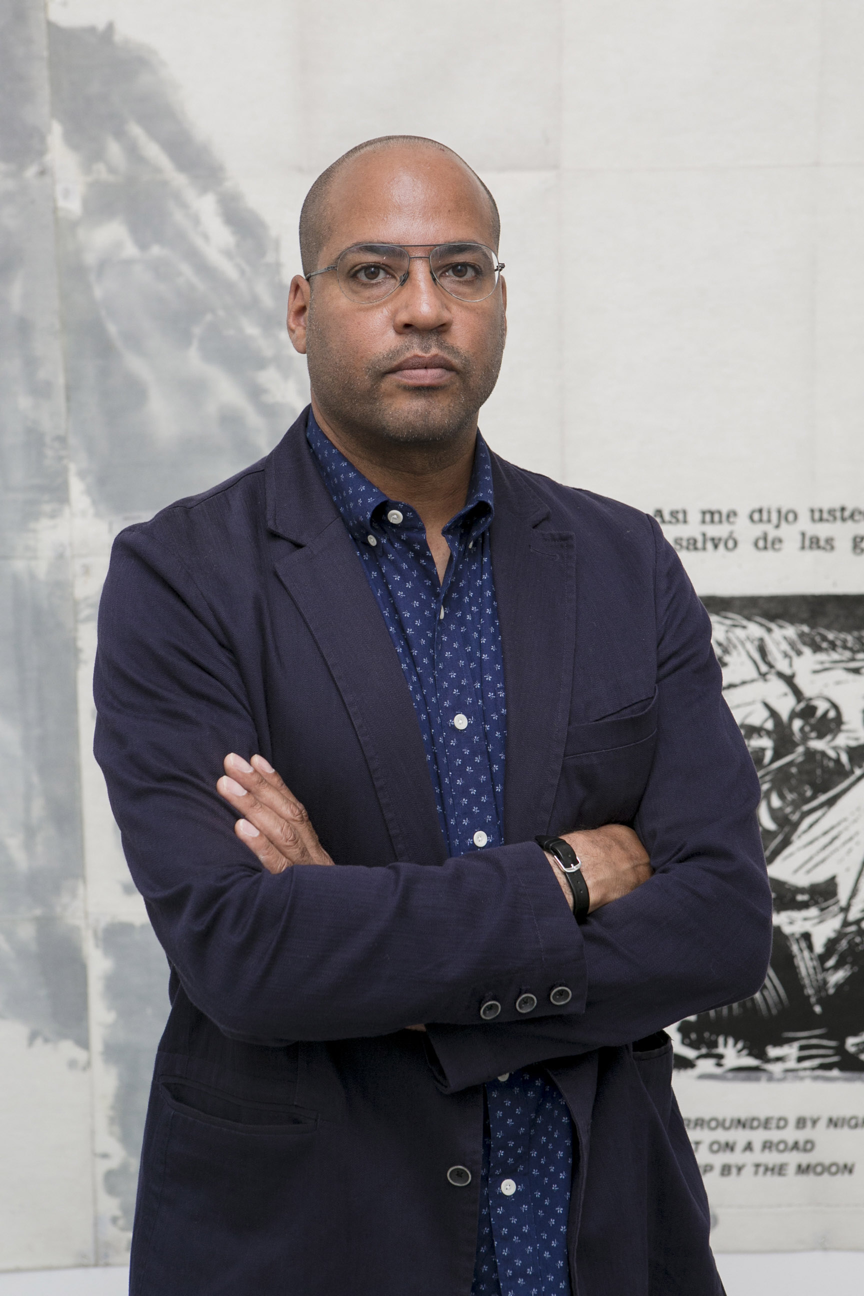 How did that discovery affect the project?
It was a eureka moment. I became interested in what existed today within the contemporary landscape. It’s important to me and a focus of my work to consider how to address the contemporary. How does one begin to address the legacy of different modernisms and their effects on the landscape? My initial focus was that the site was originally intended for the Habitat project, which never happened. But something else took root and grew there, so I wanted to go back and investigate that.

In the process of doing that, in collaboration with researchers, I tracked down whatever physical remnants still existed in Puerto Rico regarding whatever construction took place. That became the premise for the film.

Your images of the forest make it look gorgeous.
It makes for this incredibly magical environment. Although in one’s actual physical experience of it, there’s the intensity of the sonic landscape: the buzzing of the insects, the chirping of the birds, the human waste. There is a forlorn quality to it, its own tragedy that has absolutely nothing to do with the legacy of the site, but has more to do with the desolation caused by poverty and massive speculation and other ailments of neoliberalism.

Some of the housing modules intended for the site were repurposed—everything from office space to suburban homes. I visited three of them, one in Arecibo, which only appears in the suite of photographs. At one point, it was converted to a beachfront dwelling, but for whatever reason it’s been abandoned. Then I went to Camuy, which is in the interior. Three units are perched on a hillside overlooking pastures, repurposed as a cowshed. There’s another grouping of four or five units that are quite near the beach, but again in a field for cows, and those are essentially abandoned. They were quite far off the grid.

It was really interesting to see the degree to which—from my perspective and in terms of the significance of Safdie and his architecture for me—to see these things largely forgotten was quite an eye-opening experience.

You know the structures in Montreal very well, but how was it for you to enter into the Puerto Rican landscape? The initial shots in the film taken from an aerial view show an outsider’s perspective.
I think that’s always the challenge with my work. One of those things I’ve always kind of dreaded is being perceived as someone who is just kind of showing up and offering their perspective with no real commitment to the site itself. And in fact, my choice of title “in the forest” comes from a chapter title from Levi-Strauss’ “Tristes Tropiques.”

Is it possible to de-exoticize the image?
There’s no escaping it, it will always have that kind of otherness. One of the things that Levi-Strauss tries to work out is the relationship of the anthropologist to the subject. For me, there is, for lack of a better word, an earnestness, and the work is a way to engage and to try to understand the dynamics of the site. Specifically, the site itself is a representation of a very discrete ideological position. I find them because of my interest in the idea that they represent. There’s always a negotiation between the objective portrayal of the site and my own subjective analysis of it, and ideally the viewer moves through those shifts in perception and understanding that I go through when engaging and making the work. 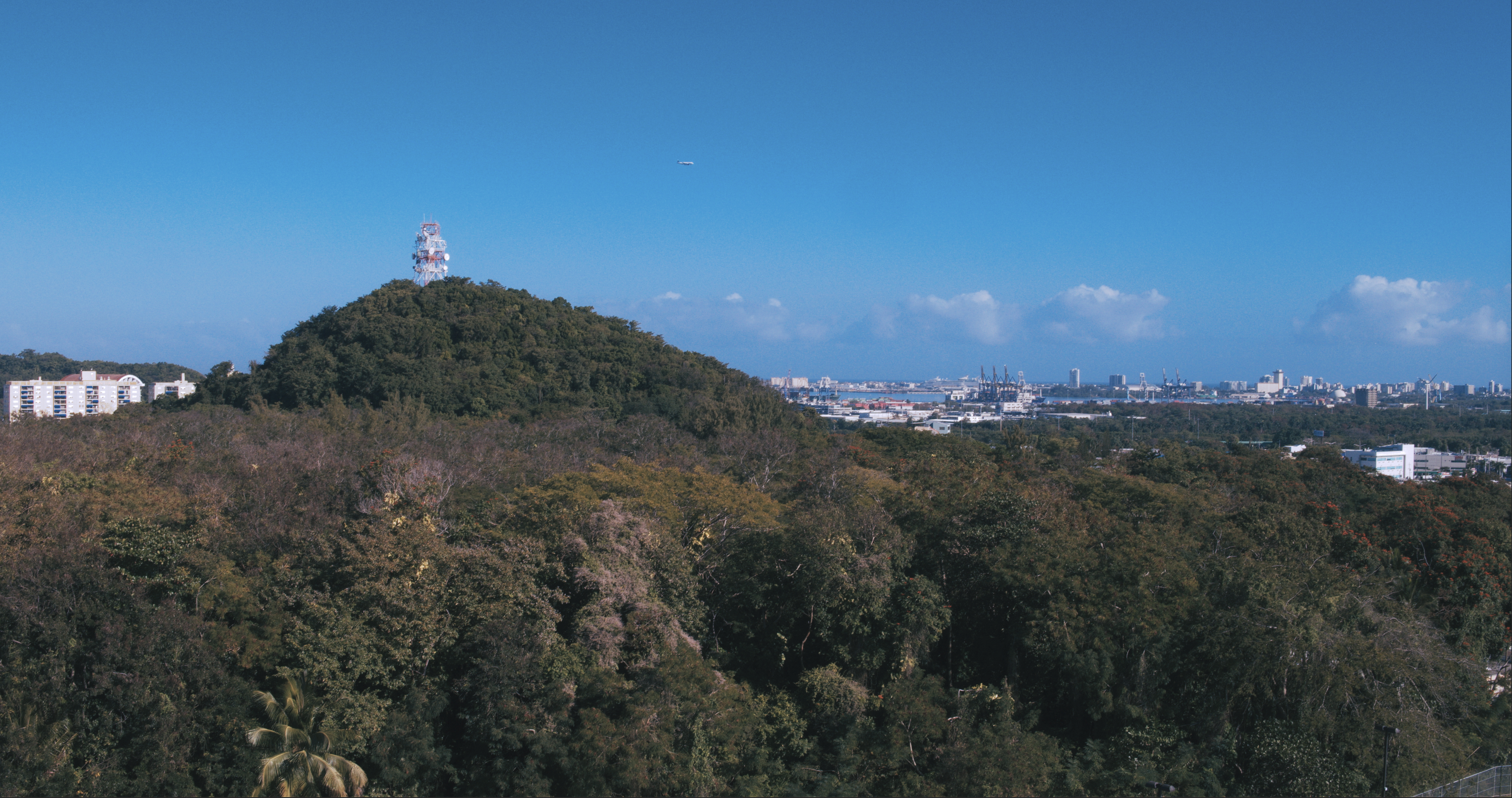 David Hartt, still from “in the forest,” 2017. 4K Digital Video File, color, sound; 20 min. Courtesy of Corbett vs. Dempsey and commissioned by the Graham Foundation for Advanced Studies in the Fine Arts.

Safdie was also an outsider to Puerto Rico. As a Canadian-Israeli he had some understanding of the context of Montreal where he designed Habitat 67, the inspiration for Habitat Puerto Rico, but in Puerto Rico, he was a newcomer.
The challenge wasn’t him as an outsider per se, in terms of not being able to respond to the vernacular context. I think there was a level of intimidation, and you see that as he went through the process, trying to get accreditation and trying to find a local firm to partner with him. Even the Housing and Urban Development representatives that were financing the project were stonewalling him. Then there were engineering challenges. What he wanted to build, there was no precedent, so he partnered with a number of innovative firms that were willing to try and figure things out with him, but they ran into budget issues.

One thing that’s always been there in terms of my relationship with representing historically modern buildings is the imperatives that preoccupied the developers and the architects, like the promise of modernism using mass production and contemporary technologies to bring a better quality of life to as many people as possible. We understand that as being the spirit of modernism. I think there’s a degree of egotism, where there are strong figures, a clear vision, and a desire to realize ambitious projects. How do you separate the spirit of a better quality of life for all with the authority of quite a hierarchical context?

For me, what makes a city incredibly rich and interesting is how diverse it is. When you reduce the level of participation and authorship to a select few, you also diminish the expression of the city and introduce a dynamic tension between the promise of some of these projects and the reality of having to actually live within them—that’s one of the questions that the project begins to address.

How do you preserve the intent of a setting meant to feel democratic and social while also acknowledging the alienating sensation of abandonment?
One of the important things about the way I make my films is your own perspective, your own embodiment or physicality are a component of the film. Within the Graham Foundation’s Madlener House there is quite an elaborate sculptural environment with the tropical plants and speakers actually distributed throughout the galleries where the film is not playing. The score is actually the kind of ambient experience of moving through that forest environment. There are seating areas where you can sit and listen. The score is generated both from field recordings that I did on the actual sites as well as the electronic composition that my collaborator Karl Fousek did. So there’s both this discreet relationship with the film, but also a relationship with the site itself. 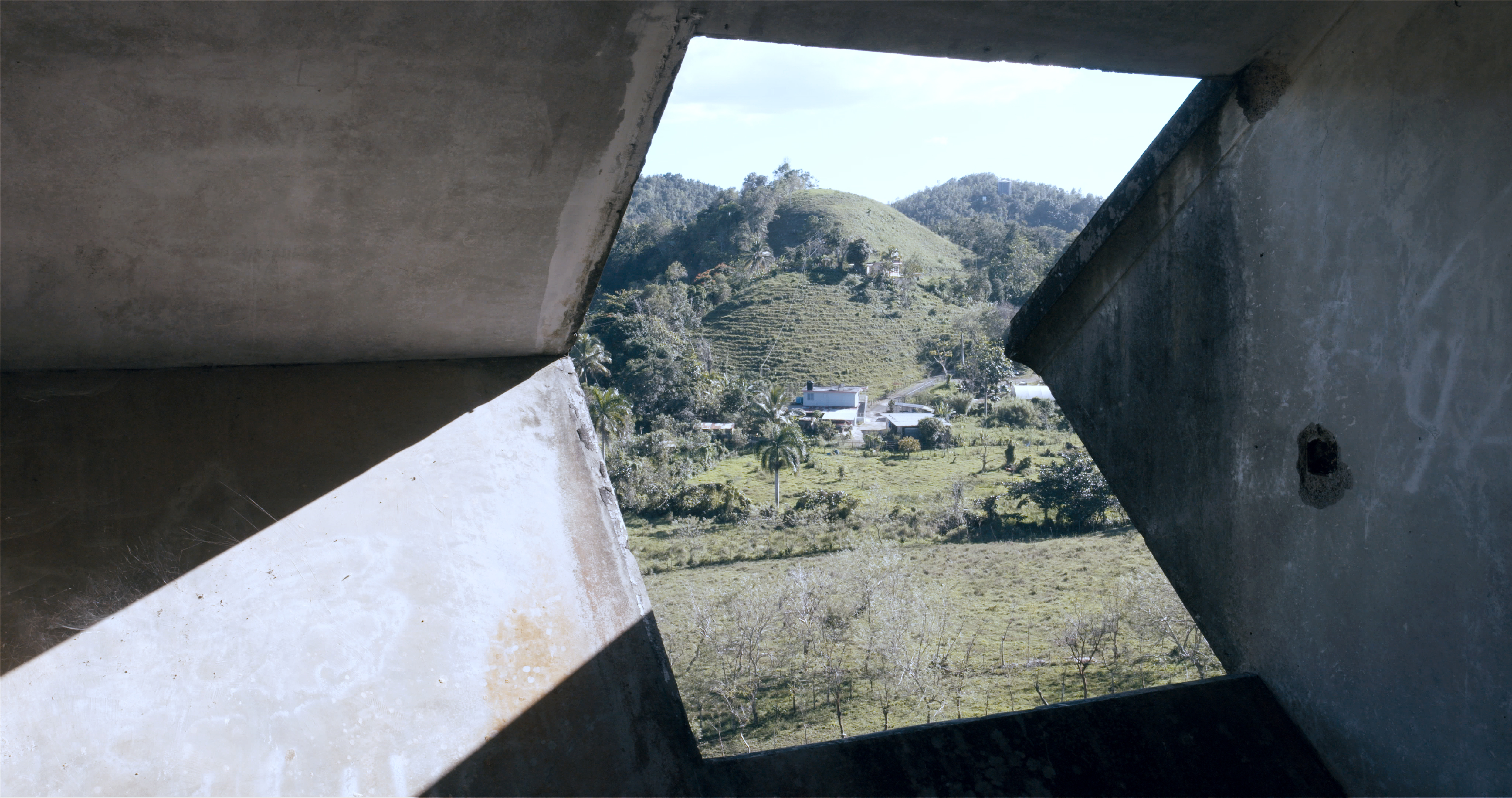 David Hartt, still from “in the forest,” 2017. 4K Digital Video File, color, sound; 20 min. Courtesy of Corbett vs. Dempsey and commissioned by the Graham Foundation for Advanced Studies in the Fine Arts.

Within the film is there something to be said about individuality prevailing amidst the repetition of modular forms?
That’s the negotiation that happens within the work, the degree to which I prioritize my own subjective experience of the space. I’m interested in putting things out there and having the viewer really try and tease out some of the issues that I think are inherent.

Is it fair to interpret the film as somewhat optimistic, addressing the cyclical process of nature, growth and rejuvenation over time?
I called it “the optimistic folly of the work,” but it’s not necessarily. There might be an ominous quality to the work, but that’s your interpretation, and so is the sense of optimism toward the end. The folly that I’m referring to has more to do with the folly of making a piece like this. For me, the same way the drone hovers in the aerial shots, I think I do too in terms of the positive or negative valence of the work, which is always shifting.