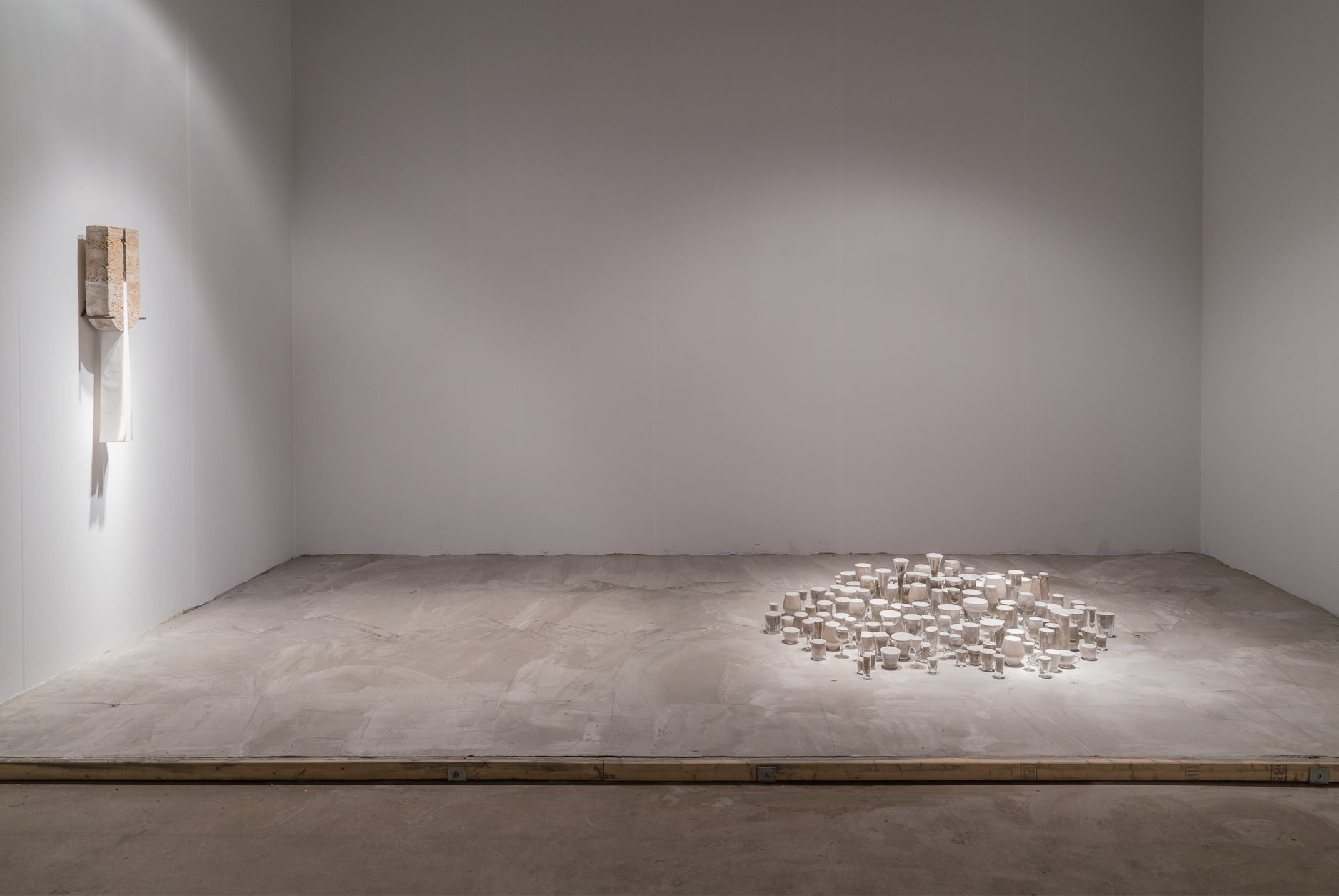 Marso/Patron (Mexico City/Chicago), #750
In collaboration with Mexico City-based Marso, Chicago’s Patron Gallery presents work by Lucas Simões, a Brazilian artist who uses the concept of dialogue to explore breakdowns of systems and structures. The booth features three pieces in conversation: “Perpetual Instability” (Recalque difetencial) (2017), an installation that appears to be a simple concrete floor, but upon contact begins to crack and corrode under the pressure of each footfall; “BEBADOSAMBA” an installation of cocktail glasses filled with concrete, and two works from his “abismos” series, a system of materials that depend on each other to hold their shape and keep their precariously balanced forms.

Sapar Contemporary (New York), #463
Gallery and incubator Sapar has been in the works since 2014 when Rashaun Sapar and Nina Levent found a home for presenting artists engaged in the kind of global, artistic dialogue that might resonate as strongly in Baku as they do in New York. Representing creatives working in diverse media—from fiber and sculpture to drawing and installation—and fields ranging from science to music and performance. Highlights include Azerbaijani artist Faig Ahmed’s meticulously planned collaborative tapestries and Nigerian Uthman Wahaab’s lovingly rendered drawings of women.

BERG Contemporary (Reykjavík), #742
BERG Contemporary focuses on an eclectic mix of artists, some established and others emerging. Berlin-based installation artist Monika Grzymala’s paper reliefs from her “FORMATION” series and her “SERPENT PULP PAINTING” combine the artist’s own paper-making methods with techniques from Japanese paper-making. Finnbogi Pétursson’s “Standwaves” draws on an interest in science, sound and technology.

Maruani Mercier (Brussels, Knokke), #120
Maruani Mercier has focused on established American contemporary artists from the 1980s, including Eric Fischl, Sue Williams and Jonathan Lasker. They’ve also represented artists such as Lyle Ashton Harris and Hank Willis Thomas at critical moments in their careers. For this EXPO presentation, the gallery focuses on Chicago-born and Brooklyn-based painter Ron Gorchov. For more than sixty years, Gorchov has extended the conversation around painting with his oil-on-linen biomorphic forms on shaped canvases. He recently extended this conversation again into sculpture. Be sure to see the cast bronze and patinaed sculptures on the outer wall of the booth. (Lee Ann Norman)