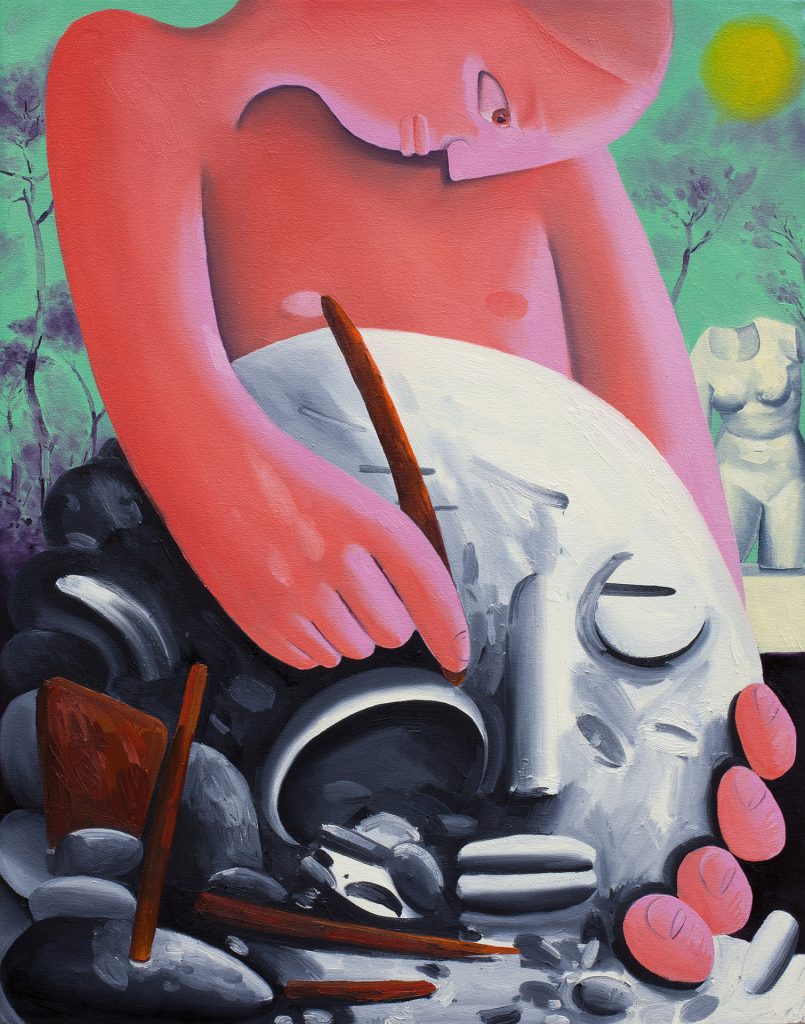 Over the past three years, nothing has had me heading for the door faster than a Trump White House aide in his first week than EXPO’s “Exposure” section. Its intentions have always been honorable, to give young and emerging galleries a prime spot in one of the nation’s premier art fairs coupled with the chance to display focused solo and two-person exhibitions with a degree of risk-taking that a blue-chip New York gallery would never dare, affording lesser-known artists a potentially career-launching moment. In practice, the results are usually mixed, and often just plain bad.

This year, something’s in the water. Not only does the Exposure section feature arguably some of the strongest contemporary collections in the fair, the galleries themselves—though several were also present last year—seem more thoughtfully assembled. With few exceptions, the choices by Exposure curator Justine Ludwig, Director of Exhibitions and Senior Curator at Dallas Contemporary, are uniformly good and occasionally great. Refreshingly free of overt sociopolitical bludgeoning, the Exposure booths present a balanced, robust engagement with contemporary figurative and abstract trends.

One of the most luminous displays is a solo presentation of work by Eleanor Swordy at Moskowitz Bayse (#353). Her paintings depict groups of bulbous, knobby figures rendered in a kaleidoscopic array of saccharine colors set ablaze by the intensity of a scorching summer sun. Swordy’s figures are both oblivious and in distress—possibly an analogue for our current social condition. Her most affecting work, “The Sculptor,” sees a determined artist in the throes of creation, crafting a grotesque head for a decapitated plaster cast; blithely unaware that the head will never fit. 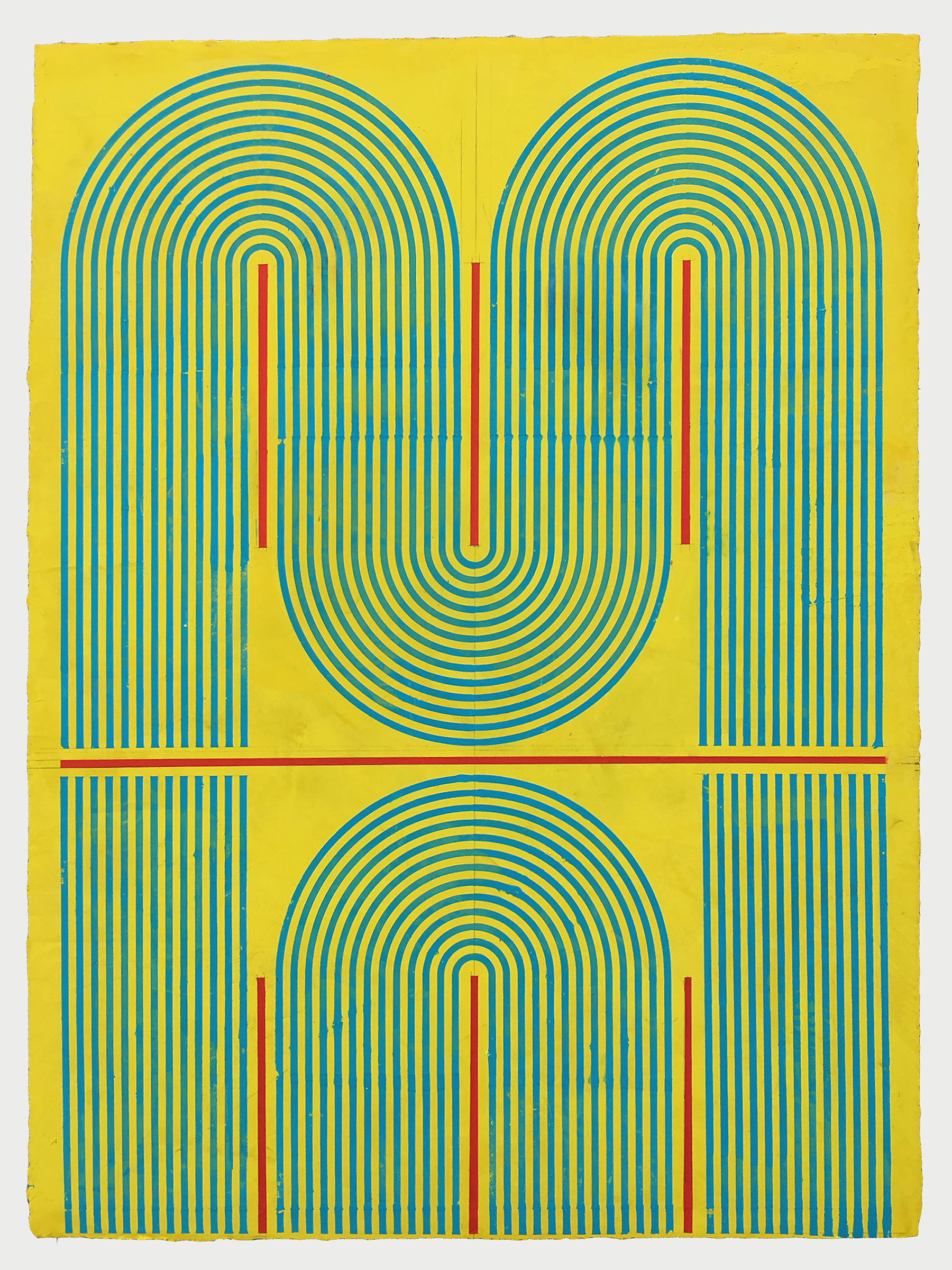 Nearby, Romer Young Gallery (# 249) has an exquisite selection of geometric abstractions by Elise Ferguson. Painted on plaster-coated surfaces, these incessantly striped works possess a seductively matte surface that contrasts the day-glo hues radiating from her formal arrangements. Much contemporary abstraction is informed by graphic design, and these Vassarelli-like images wouldn’t be out of place on a Stereolab album cover. An art of symmetry and balance, and therefore of beauty, Ferguson’s paintings are not to be missed.

Straddling the art world’s favorite nether realm between opposing forces like presence and absence, visible and invisible, figuration and abstraction, are three compelling installations at Kimmerich (#649), Dittrich & Schlechtriem (#651), and Pushkin & Gogol (#752). Travis Lycar’s haunting oil-on-linen works at Dittrich & Schlechtriem are washed-out, tapestry-like images of densely packed gesture that seem to cohere as the foliage of a tropical island. Taut and surface-affirming, these paintings hold fast to their secrets, releasing them in slow moments and sideways glances.

Another space exhibiting vividly hued figurative work is Night Gallery (#351) where artist Mira Dancy’s large-scale, acrylic-on-canvas paintings of mosaic-like female figures demand attention from across Festival Hall. Assertive though they may be, it’s Dancy’s drawings that steal the show. Light and effervescent, the painter’s ambidextrous marks dance across the papers’ surfaces, deftly describing form while retaining a carefree exuberance. Her paintings, even infused as they are with the glistening of iridescent pigments, feel stiff in contrast.

Although largely free of cringe-inducing dreck that quickens my pace, there are a few glaring lapses into bad taste at EXPO 2017. Among the most obvious is Dale Lewis’ large-scale, bathroom-orgy-from-hell “Bratwurst” at Edel Assanti (#652). Replete with globs of cliché painterly slather, this full-on depiction of sex and vomit has all the subtlety and sophistication of a Midwest truck stop. I welcome erotically-charged artwork and there is a hint of late Picasso present in Lewis’ work, but “Bratwurst” mostly succeeds as a backdrop for art-fair selfies.

When I read that EXPO was expanding the fair by an additional day, I was concerned. When faced with an identity crisis one typically confronts two obvious solutions, do something different, or keep doing what you’ve been doing, only do more of it. I was disappointed with EXPO 2016, and I know I wasn’t the only one. But with the Scottie Pippen-like, dynamic assist of Exposure, EXPO 2017 has made the appropriate course correction. What emerges is a surer, more mature fair that is still part trade show and part sales floor, but one with an undeniable grasp on the best of contemporary art. (Alan Pocaro)