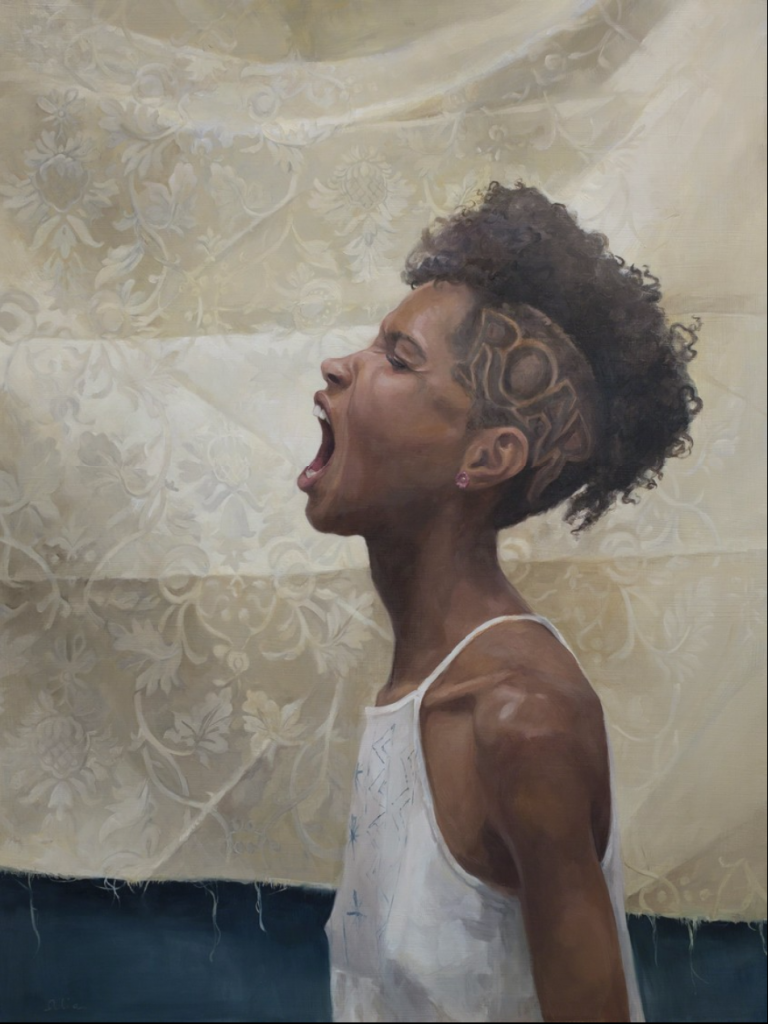 In an exhibition with work by male and female artists, the most formidable warriors in this exhibit are some of the women artists themselves. Carmen Chami immerses another artist, Aya Watanabe, in the spatial dynamics of historic Japanese screen painting as well as presenting the portrait subject’s unique personality. It’s done so well you might guess that Chami specializes in a Japanese style, but if you visit her website, you won’t find anything else like it. You will, however, discover her Mannerist self-portrait as Judith with the severed head of Holofernes between her legs. She’s an incredibly effective narrative painter who can work the expressive details of a human face into a strong design. Shana Levenson has that same ability as she depicts protective mothers and their children. She’s as much stage director as painter as she manipulates the eyes and hands of her subjects. Even more impressive is “The Knowledge” by Daniela Kovacic. She depicts a young girl staring at the viewer while playing with nested Russian dolls. That stare could cut through steel—it’s the most powerful expression in the entire exhibit—yet it does not come from strong colors or distorted lines. And again, if you visit her website, you won’t find anything else quite like it. The theme of this show seems to have taken several artists in exciting new directions. 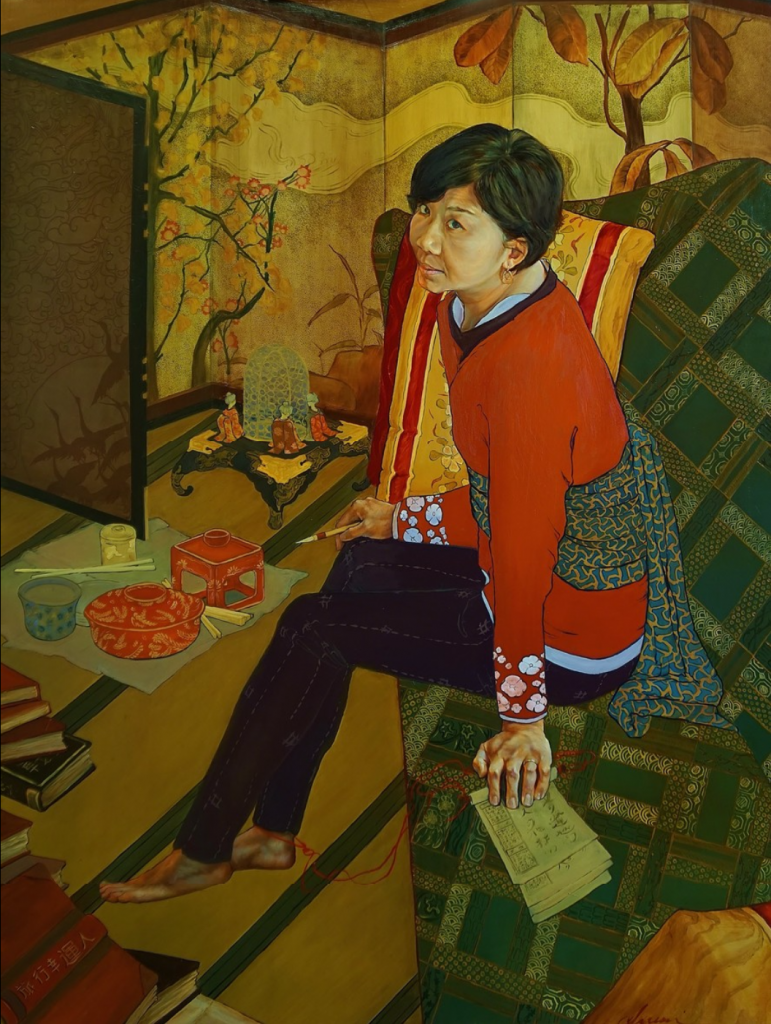 In the rest of the exhibit, the artists appear to care less about the qualities of painting and more about the various ways women can be warriors. The most humorous work is by Felice House who is now specializing in monumental images of women in iconic male roles. She presents “Virginia Eastwood in the ‘The Good, The Bad and The Ugly,’” bringing out the feminine side of Clint as well as the masculine side of Virginia. The most political is Sylvia Parker Maier, who paints a poster of Hawa Bah, whose son Mohamed Bah was shot to death in her home by New York City policemen in 2012. The most puzzling is Marco Gallotta, who has crafted a Madonna and Child out of paint and cut paper. It’s vibrant and eye-catching, but the young mother is vulnerable and sacred rather than strong and protective. Why is it in this show? The cutest work is by Astrid Ritmeester, who decks out a grade-school swimming champ with colorful cap and goggles. Many other pieces also seem designed to appeal to a general audience. 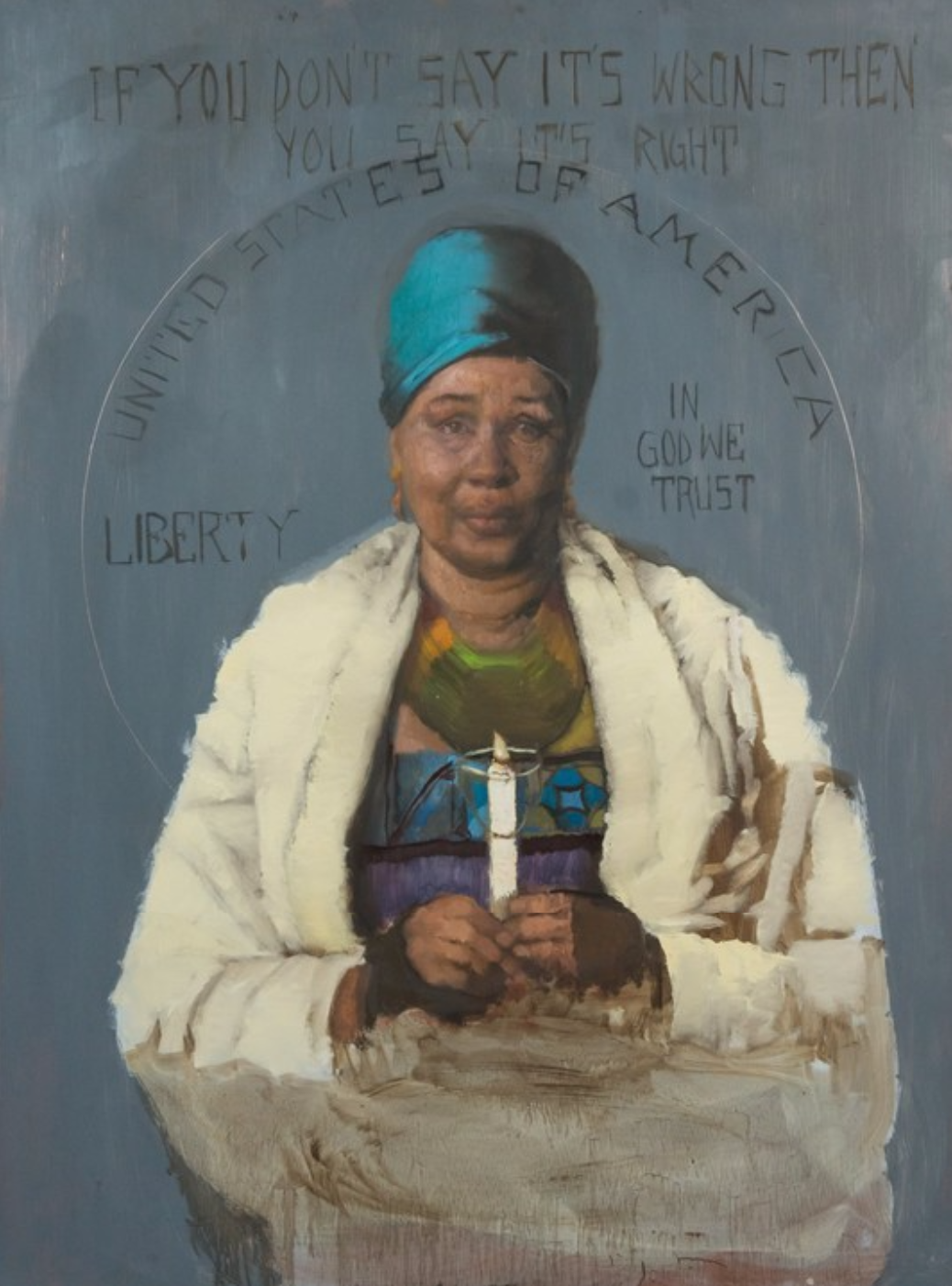 The artists here are far more accomplished than those in the MFA shows that Sergio Gomez began curating at the Zhou B Art Center over ten years ago. His collaboration with Cuban-born Didi Menendez has pulled in many of the national and international artists whom she has been including in her many publications and exhibits. Moreover, the fierce idealism suggested by the theme, Woman as Warrior, is more interesting than the self-absorption that was encouraged by the annual self-portrait shows that Gomez also used to curate.

It may be decades before our local museums host group exhibitions of contemporary figurative realism as important as the annual “American Paintings and Sculpture” at the Art Institute of Chicago once was. It does appear, however, that Gomez and Menendez, with the generous help of the Zhou brothers, are moving in that direction. I just wish they would focus more on good painting and less on the fleeting impact of clever ideas. (Chris Miller)