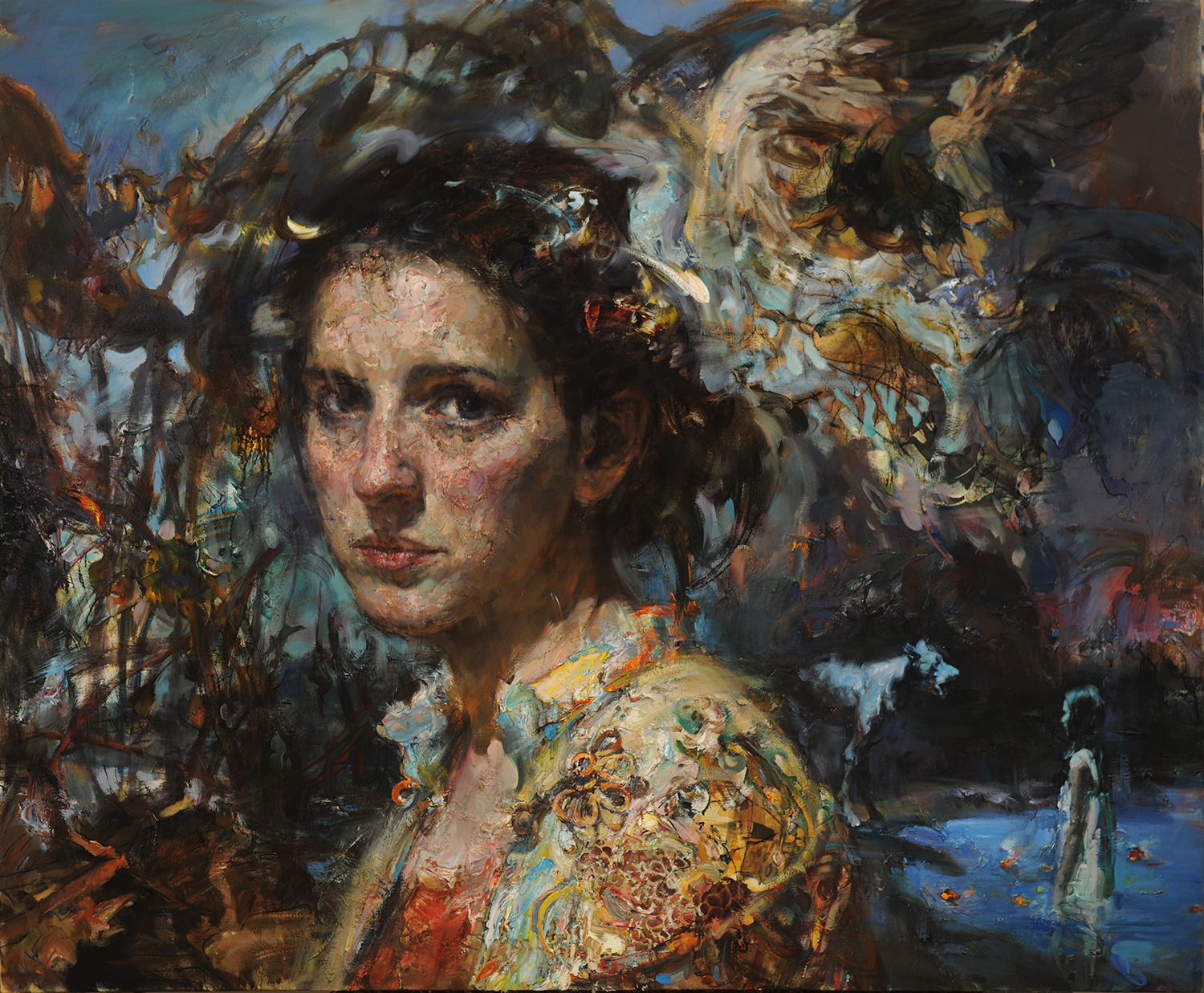 Victor Armendariz has the largest roster of figurative painters of any gallery in Chicago. This show introduces eight of them. There’s not a lot they have in common, but considered in pairs, they offer a good look at American life and art in the early twenty-first century.

Handsome young Asian men are presented in two monumental charcoal drawings by Mary Borgman. They have the gritty peculiarity of reality but also the idealistic glow of romantic fantasy. There’s even a kind of halo behind each of the figure’s heads. Asians remain a small minority in America, but these two project the sincerity, kindness and strength that is the hope of this, or any nation’s future. By contrast, Chinese-born Victor Wang presents monumental portraits of three Euro-Americans who seem mired in a historical past as difficult as his own. Their sweet, fleshy, vulnerable faces are encrusted with thick paint. The artist, who survived re-education in the Cultural Revolution, writes, “The texture and earthiness on the canvas surface are inspired by the texture of the soil on the farm where I worked in China.” That colorful texture is strangely beautiful, even as the paintings feel hopeless and sad.

In the tradition of Chicago’s Monster Roster—specifically Fred Berger—Wisconsin artist David Becker presents people, mostly men, as brutish, piggish and nasty. Curiously, though, there’s also a kind of gentle playfulness about them, as if they were eccentric rather than malevolent. Becker is highly skilled at rendering anatomical details in dramatic monochrome, as well as being less concerned with designing the rest of the visual field. In stark contrast, Caleb O’Connor paints to please. His two paintings depict young, attractive Euro-American females. This kind of calendar art, although rare in Chicago galleries and shunned by art museums, is popular enough to have its own magazines and galleries throughout the country. At its best, the genre shares the vigor and excitement of masters like Renoir or Sargent. These two pieces seem no more than competent. 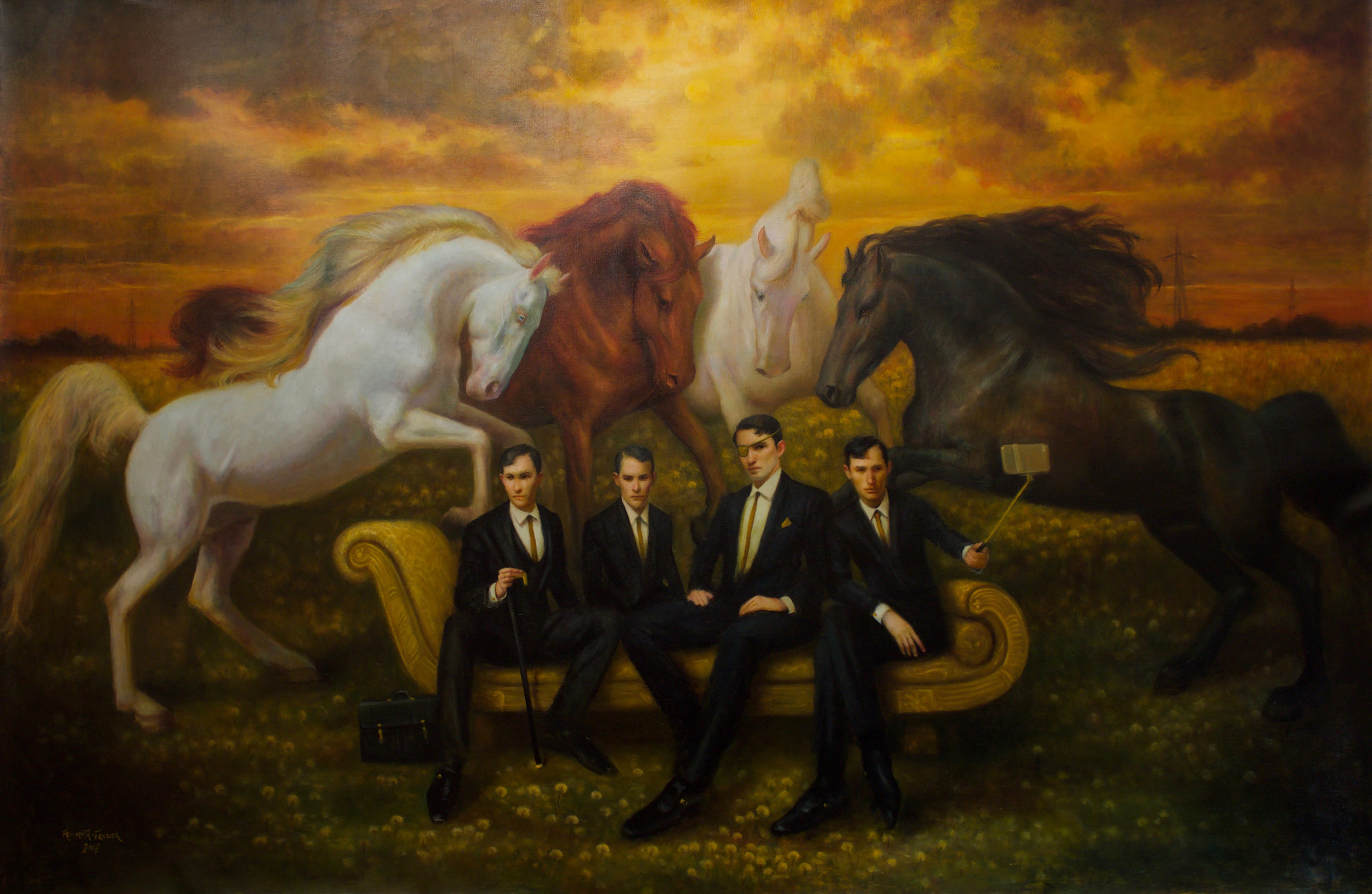 Andrew Conklin and Rose Freymuth-Frazier present more conceptual and complex narratives. Conklin addresses issues of visual creativity. In one painting, he depicts an old-fashioned painter with a model. In another, he depicts a production crew wiring up live models for computer motion-capture. These are large pieces with details that are so much better than the whole. The figures work as clothes hangers for the delicious rendering of fabric, luxuriating as if in the quiet morning light of Vermeer’s music room. Freymuth-Frazier, on the other hand, is too interested in the story to take her painting beyond illustration. In “Horsemen of the Metropolis,” she paints about her generation of young urban professionals. It’s hard to forget her image of four skinny white, junior executives sitting stiffly on a sofa in front of four rearing stallions. 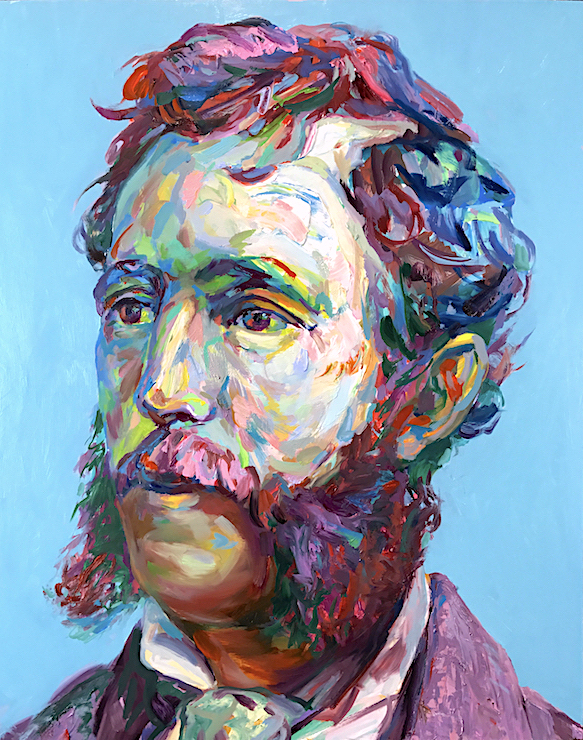 Christopher Ganz presents mysterious inner worlds with forms carefully articulated in a dramatic charcoal chiaroscuro. His “David and Goliath” is not an inner world that I care to enter. It has the dark, mangled, teenage angst of death metal music. The forms are more solid and the light more delicious in “Chiaroscuro,” his self-portrait as a working artist. It still feels morose, especially in comparison with Aaron Smith’s celebration of male sexual energy. You could not depend on the manly Edwardian men he depicts to solve any kind of technical problem. But with the wild, vibrant, complex colors dancing across their faces, a sexual partner might well depend on them to stay up all night.

Affluence and opportunity characterize the world that these eight figure painters are depicting. Responsibility, social vision and compassion, perhaps less so. (Chris Miller)