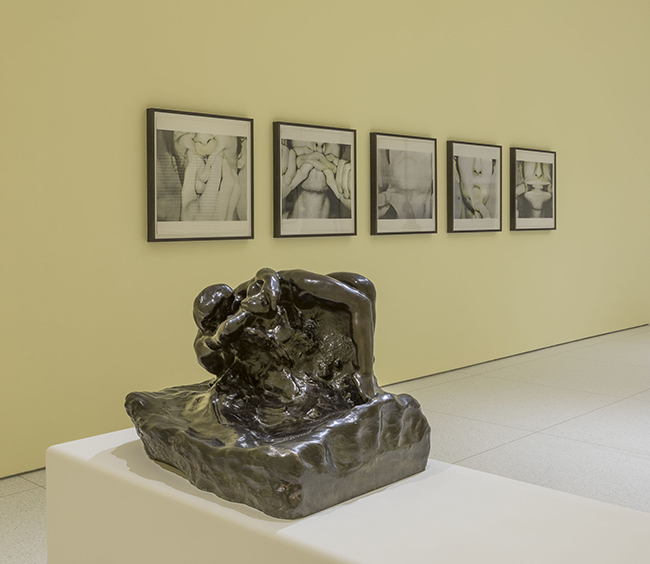 Installation view of “The Hysterical Material” at the Smart Museum of Art, Fall 2017

What happens when “we overload our body systems with too much feeling, too much form, too much symbolism”? Geof Oppenheimer, artist and curator, calls this condition “hysteria” and he exemplifies it with an arrangement of pieces by two artists, Auguste Rodin (1840-1917) and Bruce Nauman (b. 1941). Separated by nearly a hundred years, we expect them to have worked in quite different contexts. Fin-de-siècle Paris wanted to be thrilled; the postmodern New York art world wanted to be disturbed. And while the visual qualities of Rodin’s work made ordinary places feel important, the status of the gallery where it is shown is a precondition for Nauman’s work. Outside an art gallery, “Device for a Left Armpit” would likely be pitched in the trash.

At the heart of the exhibit, Oppenheimer has hung five screenprints from Nauman’s “Studies for Holograms” series between two Rodin bronzes. Nauman pinched and pulled his lips to make greater-than-life-size photo images of himself looking grotesque. Quite likely this stunt was experienced as provocative innovation back when leading New York dealer Leo Castelli hung it on his wall in 1970. In 2017, its self-obsession and bad attitude is what you’d expect in a gallery of contemporary art. I don’t feel an overload of feeling, form, or symbolism. It’s just business as usual. 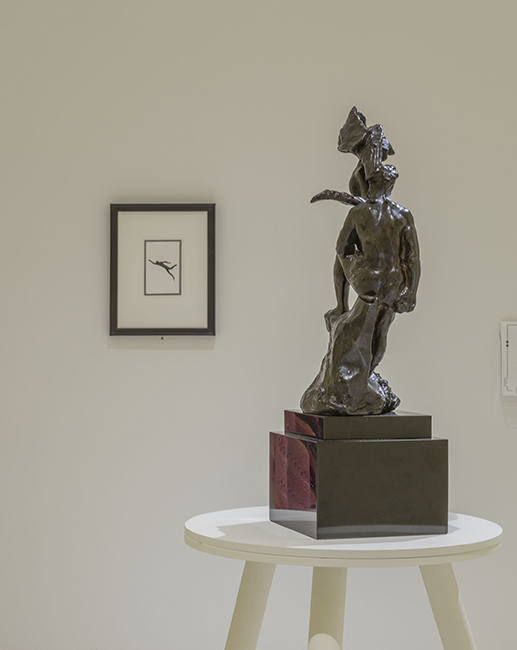 Installation view of “The Hysterical Material” at the Smart Museum of Art, Fall 2017

I also don’t feel much of anything, except frustration, from the two Rodin bronzes since they have been so dimly lit. Patinated in black, the two pieces require much more direct light to read their forms. One might note that Eugène Druet, the photographer with whom Rodin worked, mostly shot his statues as cast in white plaster. The horizontal piece, “Illusions Received by the Earth” appears as a big, dark lump. Only the silhouettes of the vertical piece, “Hero,” can be seen. It’s a dynamic, well-balanced silhouette from many angles, but most of Rodin’s modeling is obscured.

The copy of “Hero” on display in Berlin’s Nationalgalerie was once shown to a poet who wrote: “As long as it’s yourself you’re throwing to, all is skill and trivial gain. Only when your hand suddenly catches the ball an eternal female partner threw right at your core in a trajectory, that is an arch in God’s vast edifice —then is ability to catch a glory —not yours; the world’s.” ( “Nike” by Rainer Maria Rilke, 1922.) 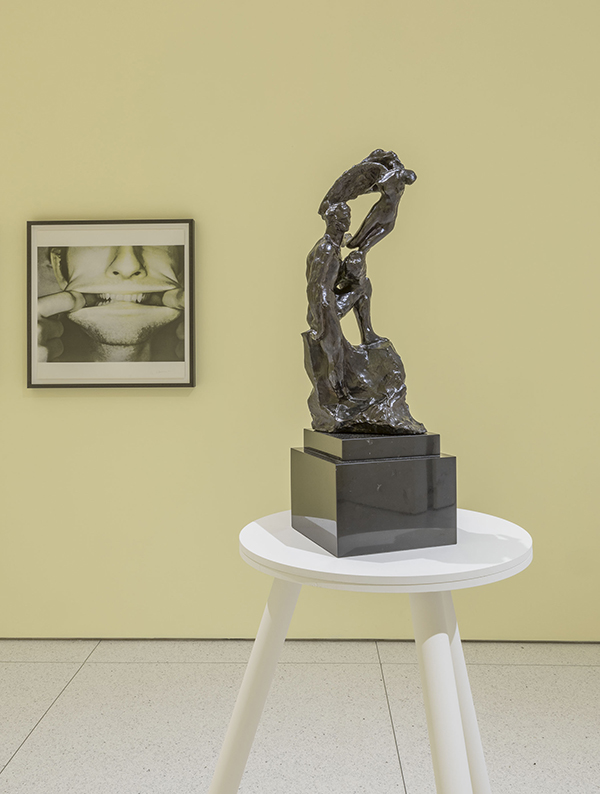 It appears that Rilke did have an intense experience with Rodin’s work, but would you call that hysteria? He seems to have experienced a rush of idealism that is unfamiliar in our contemporary art world. As the accompanying catalog demonstrates, this show serves well as fodder for post-structuralist academic discourse. It also serves to re-validate the conceptual strategies of both Nauman and Oppenheimer. But the show offers little for those interested in Rodin, even though it’s one of sixteen exhibits worldwide celebrating the centenary of his death. (Chris Miller)

“Hysterical Material” shows through December 17 at the Smart Museum of Art, 5550 South Greenwood.