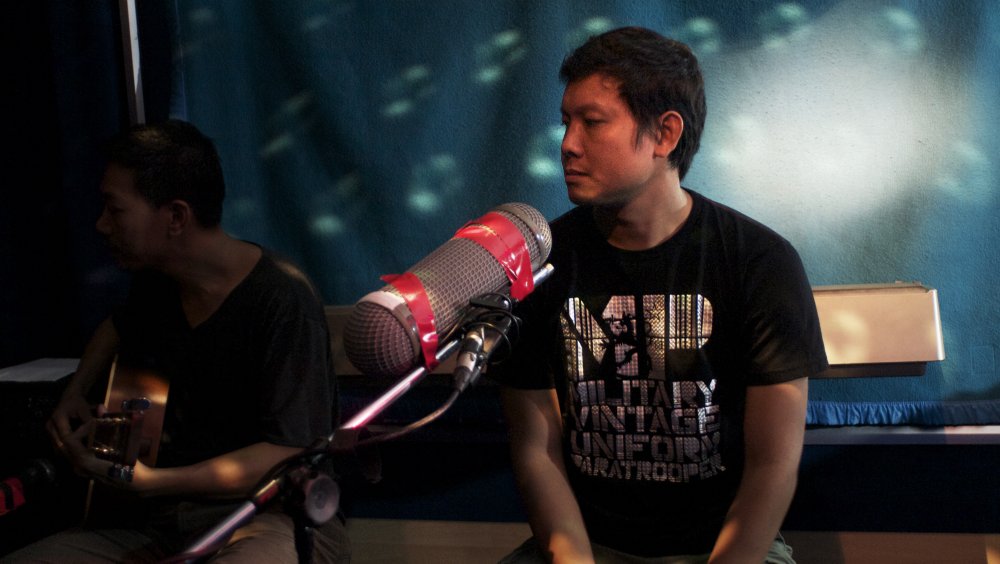 I will be the first to admit that I cannot stand video art. That is, I literally cannot stand in front of it for long enough to appreciate the beauty of its images or the complexity of its narratives. I know that I am not the only art lover who, when confronted by a work of time-based media in an exhibition, will spend the shortest allowable moment in front of it in order to appear politely contemplative before moving on to the closest painting, photo or whatever else is solid at which I can fix my gaze. If I’m writing about a show with video, I’ll always request a link to a screener from the gallery that I can watch on my own time and manipulate with the controls that have become naturalized in our post-VCR society—pause, rewind, fast-forward, stop.

In part, I lay blame on the homogenization of the moving image by its mainstream forms—movies, music videos, even Snapchat—where stories are blunt, action always extreme, and everything that’s good is also short. Given our ever-increasing hours of daily screen contact, the ironic fate of human attention is that it has been diminished to a point where fifteen seconds is enough of any one image. A Warhol quote comes to mind here, but for a lack of focus, I simply cannot recall it. 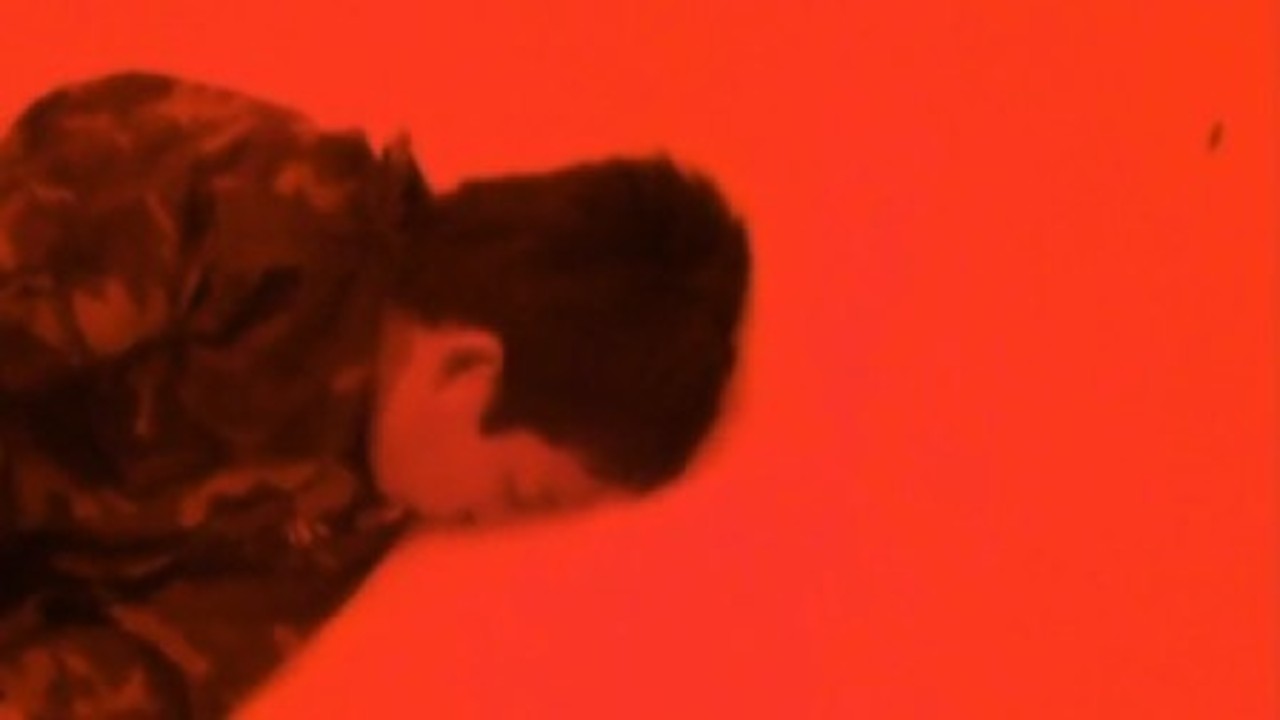 If I was reluctant to enter Apichatpong Weerasethakul’s retrospective “The Serenity of Madness” at the School of the Art Institute of Chicago’s Sullivan Galleries, it was with full awareness that the show boasts more than twenty video works spanning the career-so-far of this artist, filmmaker and alumnus of the school. Apparently, the exhibition was wary of me too. Upon entering the darkened space of the show’s first room, I was confronted by a menacing guard dog. Turning back to face the entrance, I spotted three more lurking in the shadowy corner. Altogether four fiery-red canine silhouettes, projected at eye-level from small tripods, clung to the walls, pacing anxiously. In front of them, a floor-to-ceiling projection showed a man sitting in front of a microphone, out-of-focus musicians perched behind him as the lights of a disco ball streamed slowly over his face. As he sang to the slow notes of a lounge song, subtitles told the poetic tale of a person lost in his own time, wondering if he will have the wherewithal to remember himself in the future. “Will I remember freedom?” he asks with melancholic resignation.

This moment, like many others in the show ahead of me, produced a kind of contradiction that I rarely allow myself to encounter with video work. At once sculptural and narrative, spatial and temporal, the juxtaposition of these works produce the palpable tensions that animate so much of today’s compelling sculpture and painting. Space and scale are not incidental in Weerasethakul’s installations, they are essential. In this retrospective, each room is a lesson in looking, with difference a matter of form, not degree. The videos stand on their own while bearing the considerations of collective force.

“Haiku,” “Windows,” “Bullet”—a list of titles becomes poetry itself. Young men lying on the floor in a haze of bright red appear as victims of some unspeakable crime. In fact, they are teenagers sleeping in an improvised shelter filmed by Weerasethakul while making another work. “Bullet,” the artist’s first film, from more than two decades ago, plays with the materiality of celluloid as illegible characters stream over the screen, scratched and splotchy. I have to wonder if, while at SAIC, Weerasethakul was shown work by Isidore Isou, the Romanian Jewish poet and film critic, whose 1951 “Traité de Bave et d’éternité“ depicts the artist scratching film stock as the selfsame gashes appear over his moving image. “Windows,” shot by Weerasethakul five years after “Bullet,” is equally abstract, but here the artist has turned his attention from the surface of film to the ephemerality of light. Projected through a sheet of holographically treated plexiglass that is suspended mid-air, the effect of light streaming through a window is uncannily repeated in the image and its presentation. 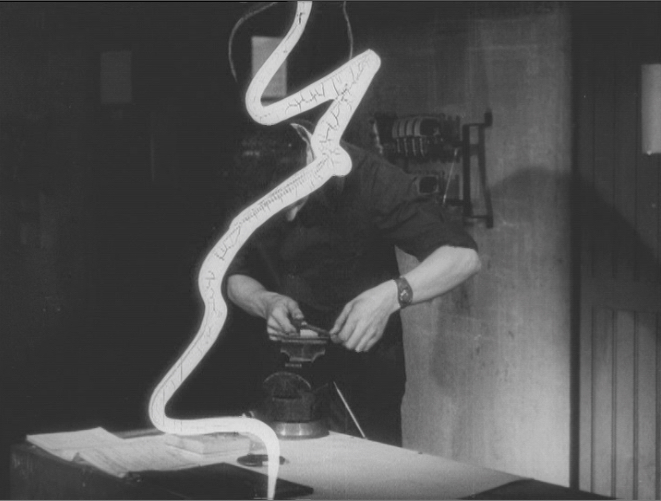 Throughout his work, Weerasethakul fixates on the alchemy of film—that combination of image, light and movement that, once combined, becomes greater than the sum of its parts. In these works, video is not a means to an end, it is an aesthetic medium in a true sense, carrying the qualities of images along with their possible meanings. In “Phantoms of Nabua,” a gauzy screen shows flashes of lightning—perhaps fireworks—in the middle of a park at night. In front of the screen appear a group of teenagers, illuminated in partial silhouette by a burning ball at their feet. As they kick it ever more powerfully between them, it roars like a comet and streaks trails of light and ember across the grass. When one kicks the flaming ball at the screen as if to score a goal, the fabric begins to burn. In a few minutes, only its frame is left and we are left staring directly into the glowing lens of the projector behind it. Eerily, one senses that one is being looked at from within the screen.

At times, his method is too rigid, as in “Ashes,” a video diary shot with the LomoKino camera, a novel device that uses average 35mm film rolls to produce homemade shorts. The clicking of the hand-cranked camera, reproduced as a sound effect in the work’s audio track, cheapens the magic of Weerasethakul’s vision like an overpowering filter on Instagram. Conversely, the amplified shutters that occasionally block one or both throws of a two-channel projection called “Invisibility” work to the opposite effect, enhancing the fundamentally manual qualities of a medium that, more than any other of our time, has been transformed radically in its leap from analog to digital. Looking at these shadows play across the long walls of the gallery, the art historian in me cannot help but feel nostalgia for the days of slide-comparison lectures in which an image of one artwork is projected next to another in the warm wash of 35mm slides and to the hum of an overworked fan. 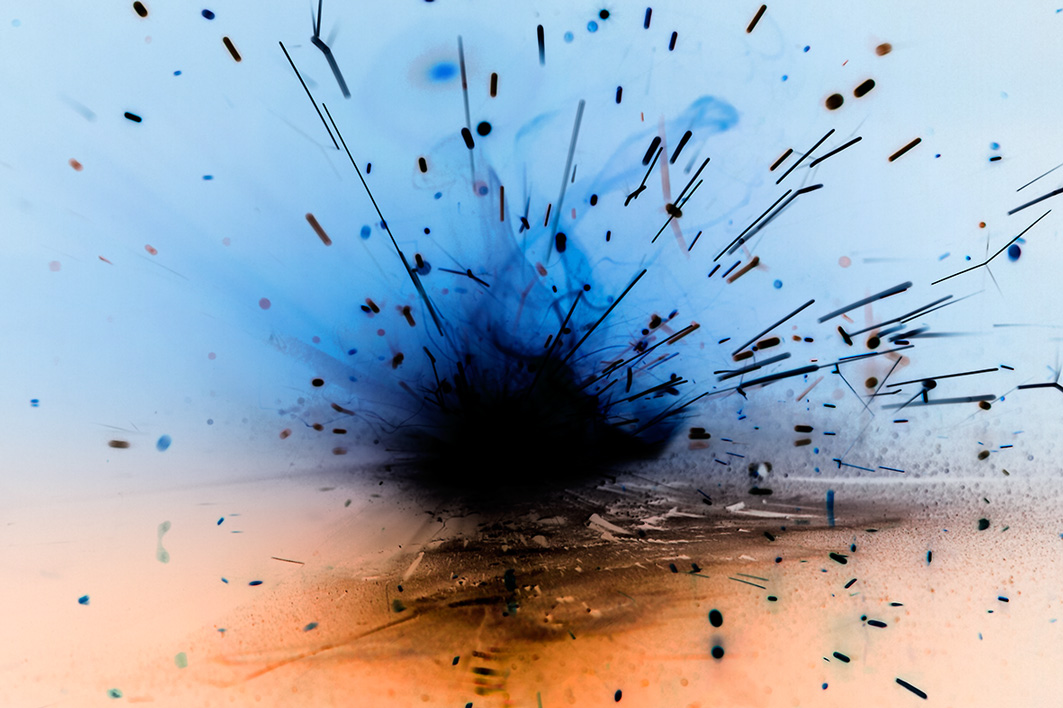 In his sweeping book-length essay “In Praise of Shadows,” the Japanese author Junichiro Tanizaki tells of the interplay of candlelight on the gold-veined surfaces of fine lacquerware, writing that it “is not something to be seen in a brilliant light, to be taken in at a single glance; it should be left in the dark, a part here and a part there picked up by a faint light.” Much else could be said about Apichatpong Weerasethakul’s gallery work, let alone his feature films, several of which will be screened at SAIC throughout the run of this exhibition. The fraught politics of Southeast Asia, the queerness of everyday life, the intimacy of darkness—for these I will have to return, time and again, to keep looking.

“Apichatpong Weerasethakul: The Serenity of Madness” shows through December 8 at the Sullivan Galleries of the School of the Art Institute of Chicago, 33 South State.