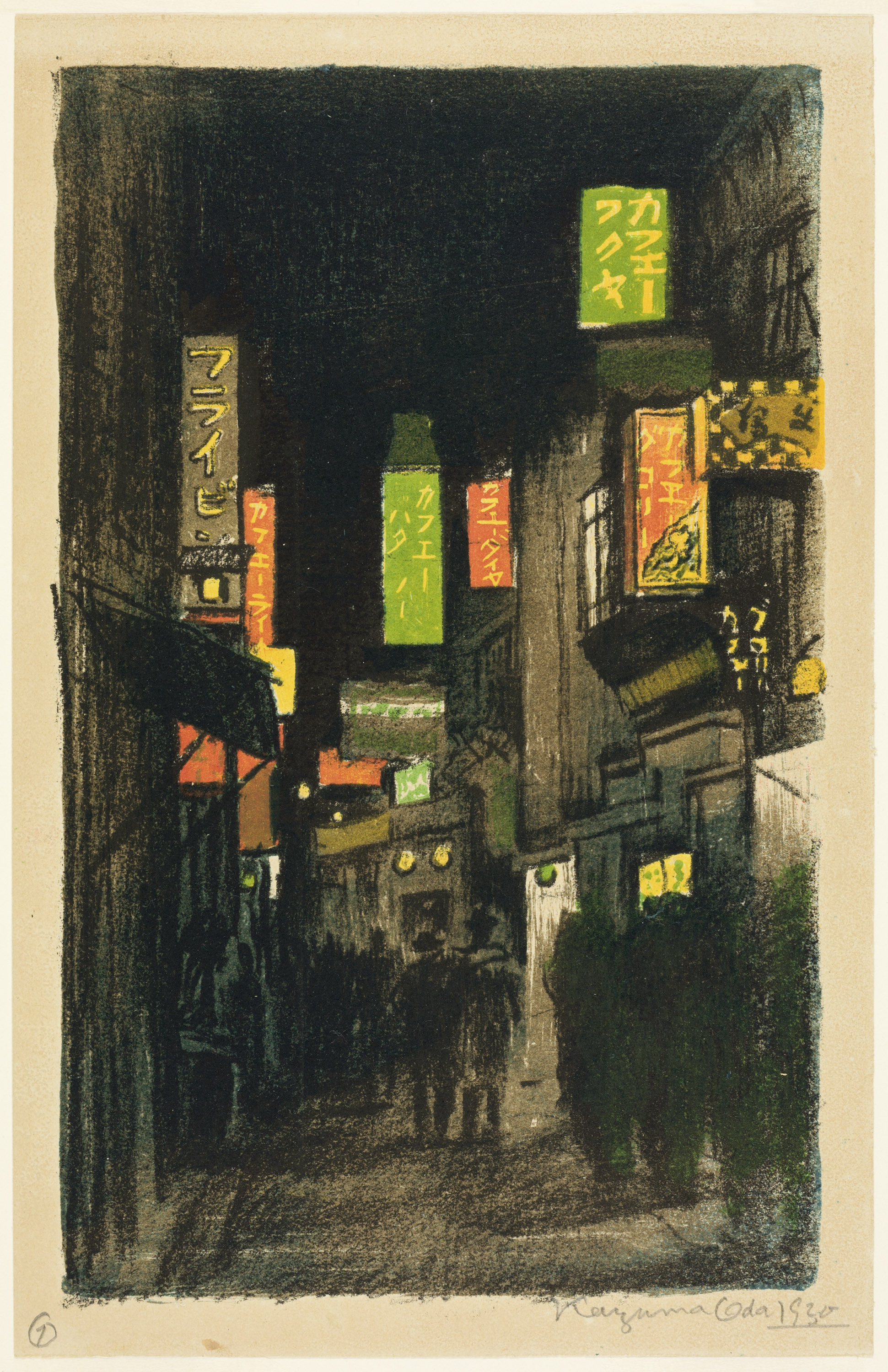 The decline of the ukiyo-e genre meant that, by the 1920s and thirties, woodblock prints now read to Japanese spectators as, in Chelsea Foxwell’s words, “art commodities and relics of the past.” Printmakers working in the early twentieth century were acutely aware of the “outflow” (ryushutsu) of art to foreign collectors whose taste for particular subjects and styles drastically altered the Japanese market. As Foxwell shows, the distaste of western buyers for works that betrayed too much modernism and urbanism lead to a domestic glut of late ukiyo-e prints featuring precisely those qualities. Japanese critics described these prints in terms of “decline” (suitai) and “decadence” (dekadansu). The works on display here, largely made during the twenties and thirties, show how a range of artists responded to the vexed position of printmaking in modern Japan.

Many of the prints are alive with electric lights and prominent signs, night scenes enabling the artists to depict Tokyo’s modern urban bustle. Bowler hats and kimonos throng the streets. The darkness also permits passages of virtuoso play, as in the skillful rendering of light on water in Kawase Hasui’s picture of the Shinobazu Pond and Yoshida Hiroshi’s vision of Kagurazaka Street in the rain. But for every print featuring a train station or shopping district is one reprising the standard fare of Edo period imagery. Both Hasui and Hiroshi have rural views on display, with Hasui’s excerpt from his “Souvenirs of Travel” series featuring the deep blue gradient made famous by Hokusai and Hiroshi’s views of Mount Fuji clearly calculated to appeal to a more established taste.

Past and present come together most obviously in a stunning set of woodblocks by Hiratsuka Un’ichi which are worth the—admitedly steep—price of admission alone. His views of mountains and fields are rendered in blocky forms, some with large fields of black that deploy negative space with real talent. A 1937 depiction of Cape Nichiren dissolves into abstract play at points, the craggy forms of rocks and waves reminiscent of Wyndham Lewis or Helen Saunders. His more colorful rendition of the Mount Amagi forest experiments with fields of repetitive mark-making, demonstrating how Japanese printmakers were developing their own understanding of modern art in dialogue with the twin inheritances of nihonga (“traditional-style painting”) and yoga (“western-style painting”). The Art Institute’s displays of prints drawn from Clarence Buckingham’s vast collection have been reliably rewarding of late, and this entry is no exception. (Luke A. Fidler)

“City and Country: Prints from Early Twentieth-Century Japan” shows through December 31 at the Art Institute of Chicago, 111 South Michigan.