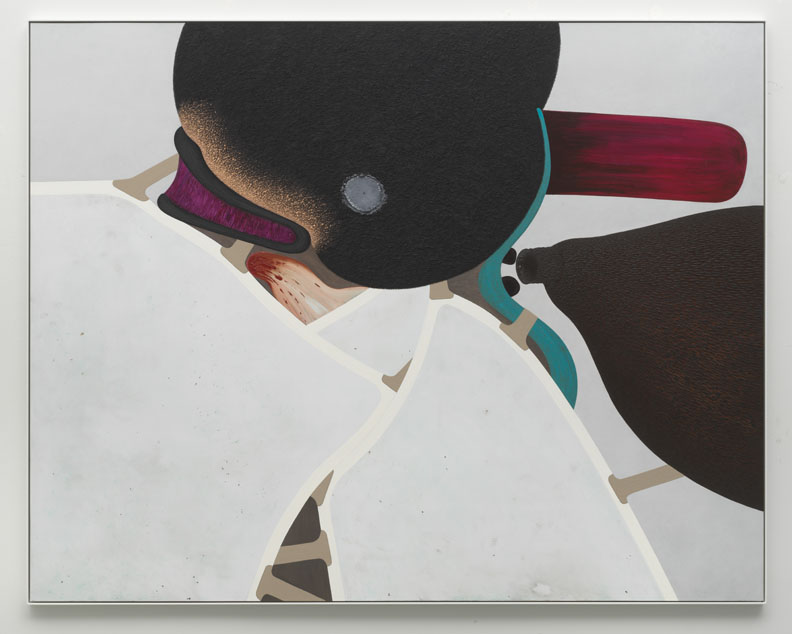 Corbett vs. Dempsey is exactly the gallery you’d expect to show the paintings of Lui Shtini. First, because they are more about painting than art theory or social identity. And then because there is something uncomfortable about a Shtini painting that makes you feel a little more tough, sophisticated and perhaps even amoral for enjoying it.

Painted on four-by-five-foot industrially coated aluminum panels, each piece offers a festival of contrasts. Some areas have the bright, shiny look of new hospital equipment; other surfaces feel as thick and dull as a wool blanket. Others are as unpleasantly greasy as a plastic sack of freshly ground beef. Both lumbering and delicate, the shapes relate to the size and contours of the human body, like the interior of a luxury automobile, yet they also feel uncomfortable and puzzling. The very opposite of free, spontaneous self-expression, each shape has its own unique texture and appears to have been industrially manufactured. But for what purpose? They consistently give the mind contradictory information.

In earlier work, the artist restricted himself to one central, mysterious object. Now, the mystery is magnified as additional objects enter the picture plane and interact with each other. There is a sense of impending violence, like the animated monsters in video games that crush, impale, and eat each other. Born in 1978, the artist might well have spent many youthful hours sitting at a gaming console.

Shtini paintings represent an advanced, highly technical society that is running quite well—just not especially for the benefit of humans. Civilization is a joke, and the joke’s on us. So why is this misanthropic dystopia so enjoyable? Because, like a display case of venomous reptiles at the Field Museum, these images feel equally real, beautiful and threatening. Up close, many of the surfaces appear three dimensional. Infinite care has been taken with their textural details. Every edge is sharp where it should be sharp and fuzzy where it needs to be fuzzy. And thankfully, they occasionally offer some relief from clinical perfection as a surface begins to turn nicked, smeared and grubby. It’s a pictorial world as lurid, dehumanizing and well-produced as the television morning news with its daily menu of fresh disaster and absurdity. But these paintings are so much more enjoyable to stare at!

Though Shtini grew up in Albania, his work recalls the Chicago Imagists. He offers the same high craft and smart-aleck attitude, though he’s more impersonal and does not surrender to popular culture. But neither did Barbara Rossi. Don’t be surprised if someday he paints on glass as well as Dibond.

Shtini’s dynamic geoforms also recall the early Russian Modernists showing at the Art Institute. But whereas every line that El Lissitzky drew encouraged participation in building a new society, that dream died in Eastern Europe long before Shtini was born. These are beautiful paintings, but to thoroughly enjoy them, one might need to be more sophisticated and cynical than I. (Chris Miller)