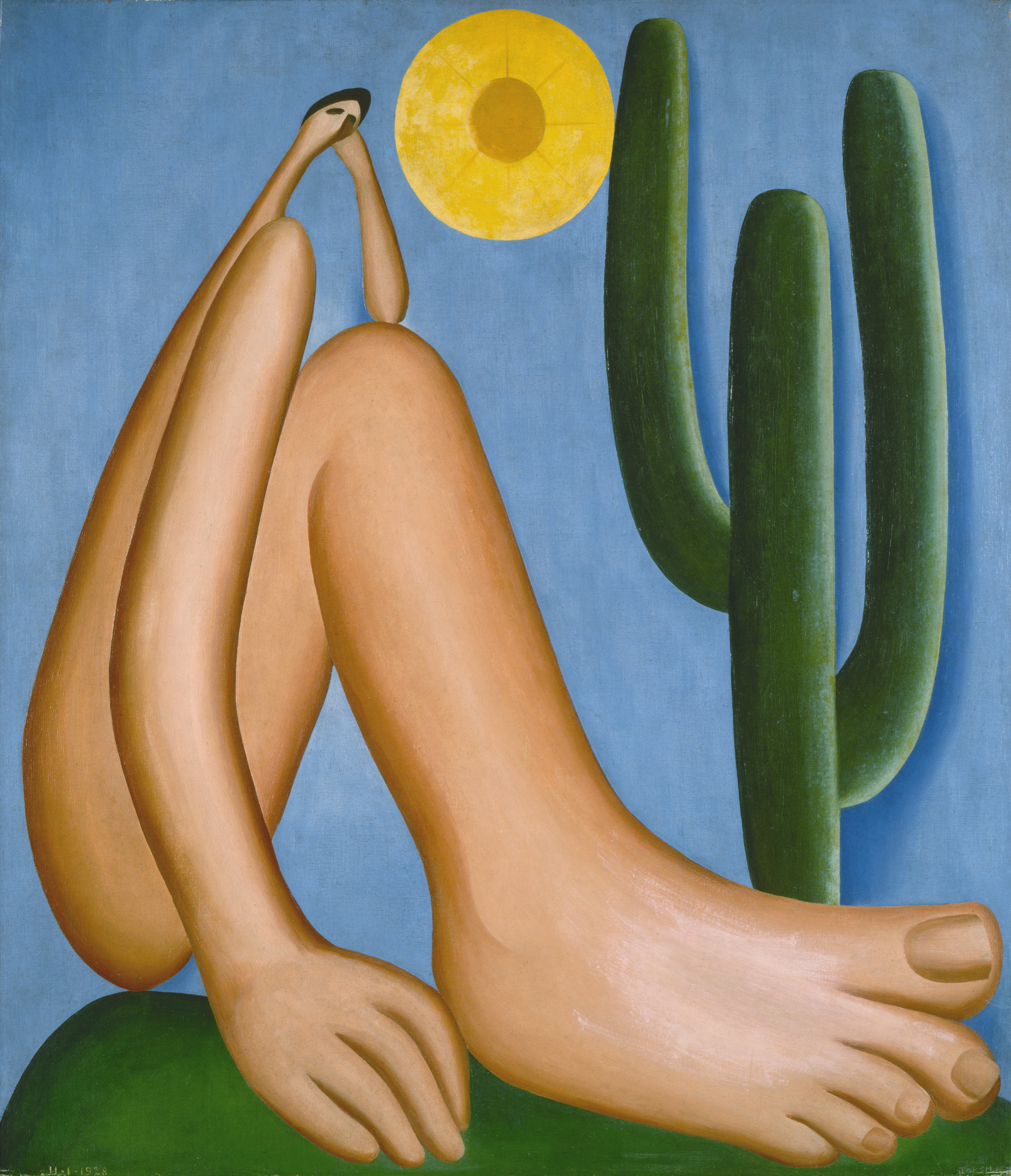 “Tupi or not Tupi” wrote Oswald de Andrade in the “Manifesto antropófago”  (Manifesto of Anthropophagy, 1928), in commemoration of the Tupi tribesmen who ate Pedro Fernandes Sardinha (1497-1556), the first bishop of Brazil. The somewhat naughty poet was promulgating a modern Brazilian culture that would digest and then combine South American, African and European legacies. The manifesto was inspired by an untitled painting given to him by his wife, Tarsila do Amaral, on his birthday. Consulting a dictionary of the Tupi language, they titled it “Abaporu” (Man who eats) and its reproduction promotes this exhibition of Tarsila’s paintings just as it did the original manifesto. 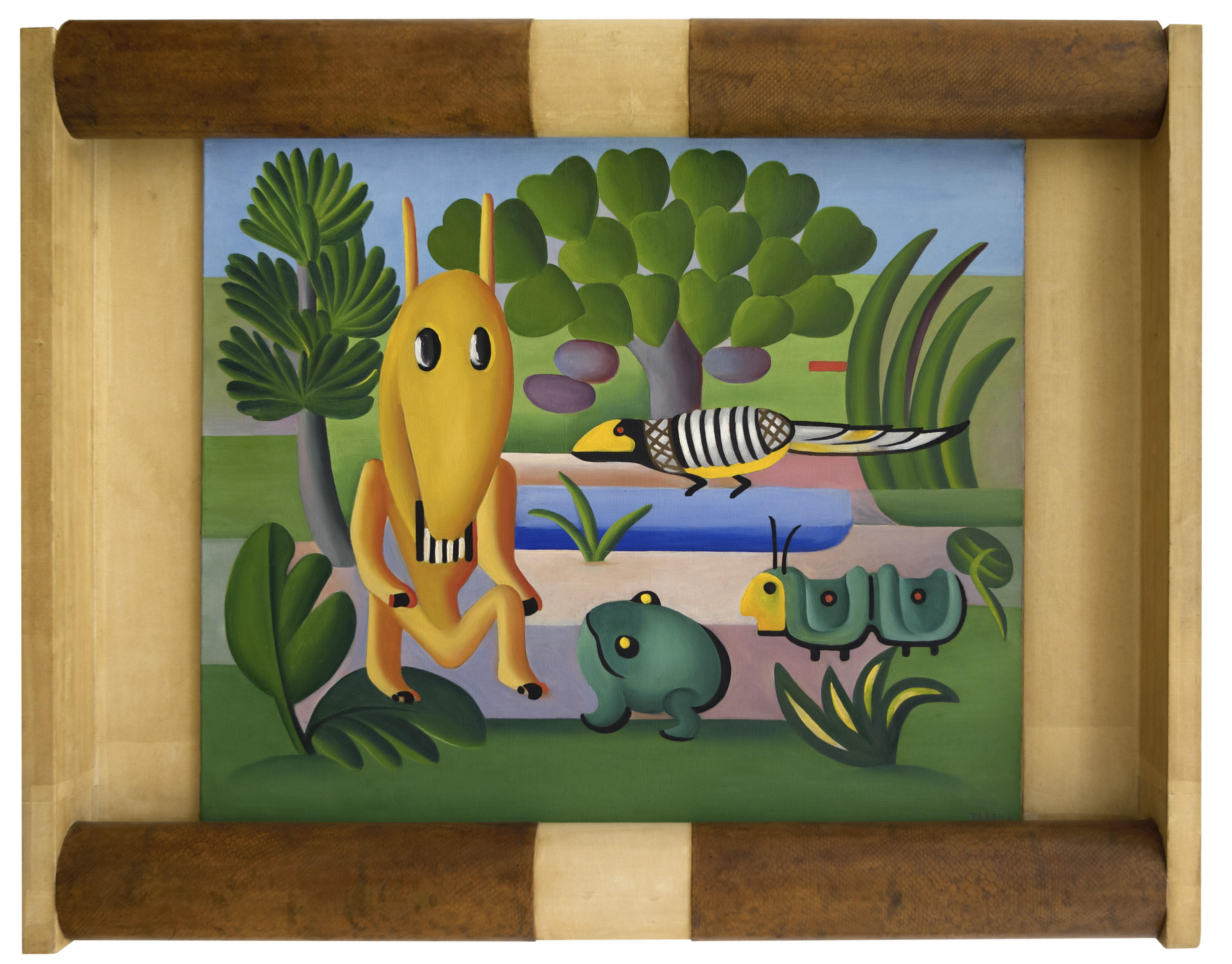 Looking at “Abaporu” in Chicago ninety years later, it may be difficult to see anything African or South American about it. Like Picasso, who was born five years before her, Tarsila was trained in academic European art. Also like Picasso, who had moved to Paris in 1900, she went there twenty years later to join the European avant-garde. She carried the flame of Modernism back to São Paulo where she was among the “Grupo dos Cinco” (Group of Five). Together, they organized “Modern Art Week” of 1922, much like American modernists had created the groundbreaking Armory Show in 1913, but with one significant difference. The Armory show was organized by an association of painters and sculptors, while three of the five Brazilian modernists were writers. A portion of Andrade’s “Pau-Brazil” poetry manifesto suggests their aesthetic: “Synthesis/Balance/Finished bodywork/Invention/Surprise/A new perspective/A new scale.” With no mention of moral responsibility or spiritual development, this is a rather formalist agenda. Yet there is also no mention of visual pleasure, and the word “beauty” is absent from the entire document. Instead, it asserts: “Our age announces the return to pure meaning.” 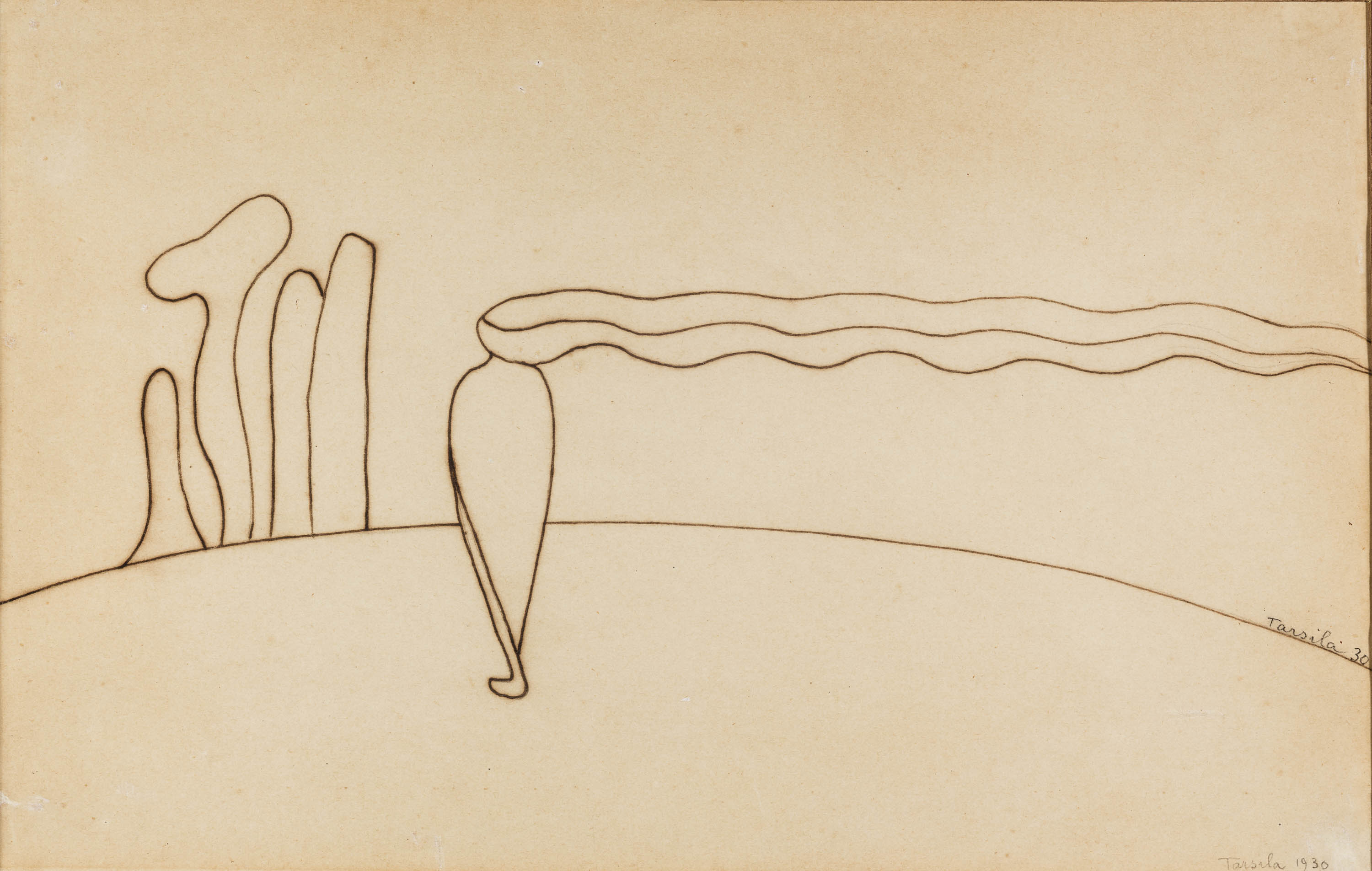 Tarsila had turned away from classical realism, but visually she remained a sensualist. After studying with Albert Gleizes, André Lhote and Fernand Léger, she traveled around Brazil with Andrade practicing a decorative kind of Cubism. These pieces are as cheerful and dynamic as the work of Léger, but they depict villagers and trees rather than urbanites and machines. Born into wealth and privilege, Tarsila had grown up on a coffee plantation, not a bustling big city. Returning from another trip to Paris, her work turned inward, but unlike many Surrealists, her inner world seems peaceful, even somnolescent. “Abaporu” looks more like a languid lotus eater than a ferocious cannibal. When Tarsila’s family lost its fortune in the Great Depression, Andrade left her for a younger woman. Her subsequent depictions of psychic pain and loneliness are quite moving, as is her sweetly condescending attempt at social realism.

A decade of her work is now showing in the Modern Wing because her depiction of a sunbathing cannibal with big feet and an Afro-Brazilian woman with exaggerated lips and breast still feels provocative, albeit now in a goofy adolescent kind of way. But many other pieces also show that she was a consistently careful, passionate and inventive painter. It’s too bad the curators decided to ignore the next four decades of her career when “she curtailed her experimentation.” (Chris Miller)

“Tarsila do Amaral: Inventing Modern Art in Brazil” shows through January 7 at the Art Institute of Chicago, 111 South Michigan.