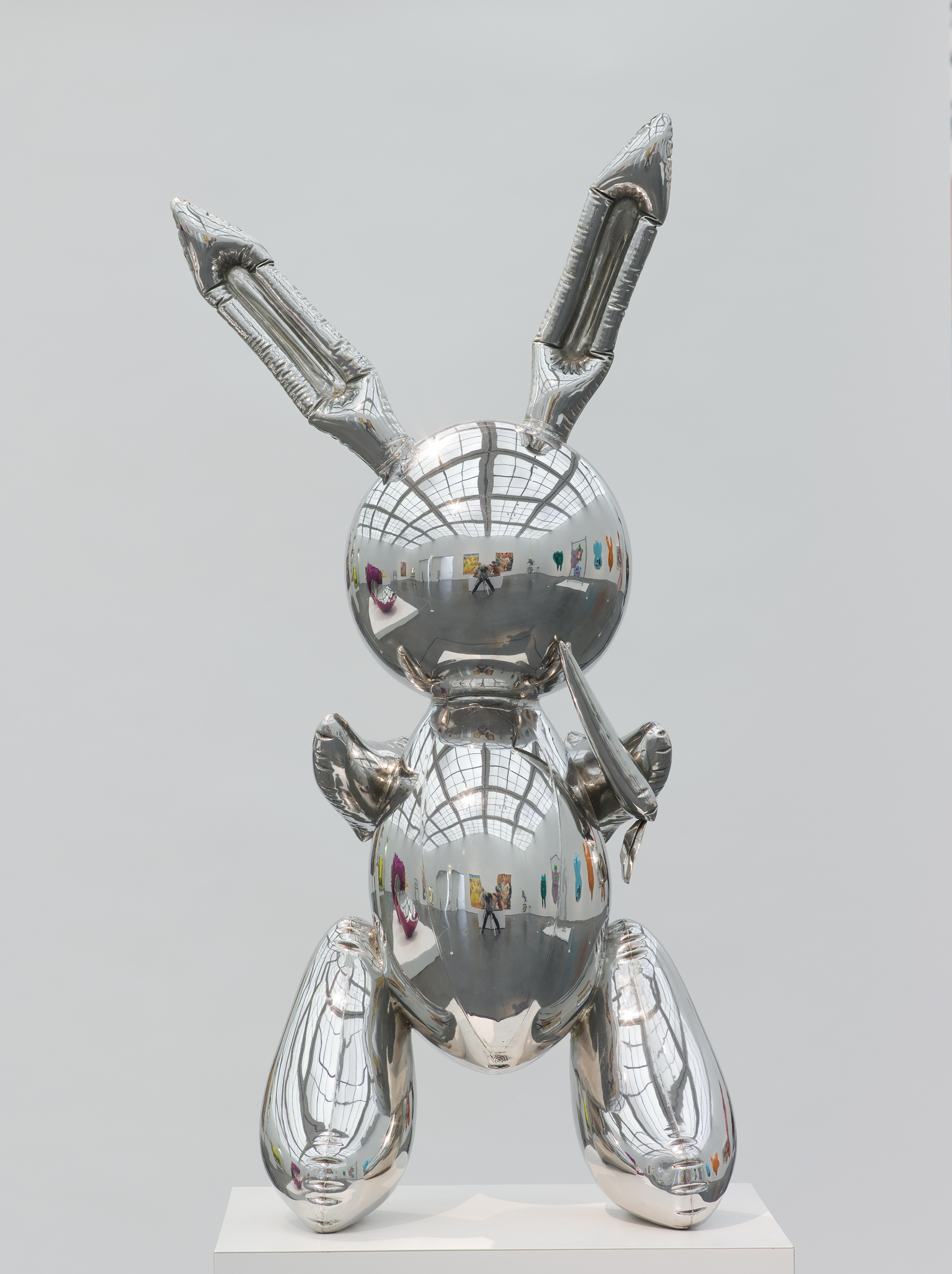 Let’s get real here: you’re going to see an awful lot of Jeff Koons at the Museum of Contemporary Art during their fiftieth-anniversary exhibition, and if you dare to not hate, trash, mock it—or even, shock!, if you enjoy it—I must tell you, you are putting yourself at risk. They will come for you, eye-teeth and tongues sharpened, the critics and gate-keepers, old brahmins and young hot-bloods alike.

But I have beautiful news for you! It’s okay to like Jeff Koons. He wants you to like him! He yearns to open up the world of Art with a capital “A,” the frightening one, to every single person he possibly can. His big top, salesman persona is no fake, no gimmick. He is shockingly and earnestly honest. In fact, that is his greatest quality, the unbroken thread running through his practice.

There is a lot of animosity out there surrounding Koons. His detractors see his works—after all, they are inescapably everywhere—but they do not see their merits; they peer into the perfect mirrored surfaces of “Rabbit,” but they do not see themselves reflected in them. His art is easy to write off; his goodwill too thick to possibly be true.

But he means what he says. Visual art is often a conceptually complex domain, and Koons is refreshingly free of mental rigor. He awes with scale and perfection, not mental gymnastics.

He has been exhibiting at a noticeable magnitude since the late 1970s; been a force since 1985; and an artist whose works have broken individual living-artist auction records twice. A metal balloon dog for $58.4 million. Infuriating, isn’t it?

Too basic, more importantly too base, too loud and fun and campy and ham-fistedly charged—gavaged, even—with Freudian-style sexuality, and most damning of all, with none of the typical art-world cynicism behind it! No detachment, precious little subversion, no antagonism, not even a coquettish little wink here or there!

No, Koons always comes riding in like a missionary, black tie and white-button-up billowing, riding in to rescue you, the consumer of art, from the insecurities bred by your own culture, your own tastes, your own visual identity. And like all evangelicals, he has faith in this idea; and, like all of the faithful, he is truly, deeply, sincere. 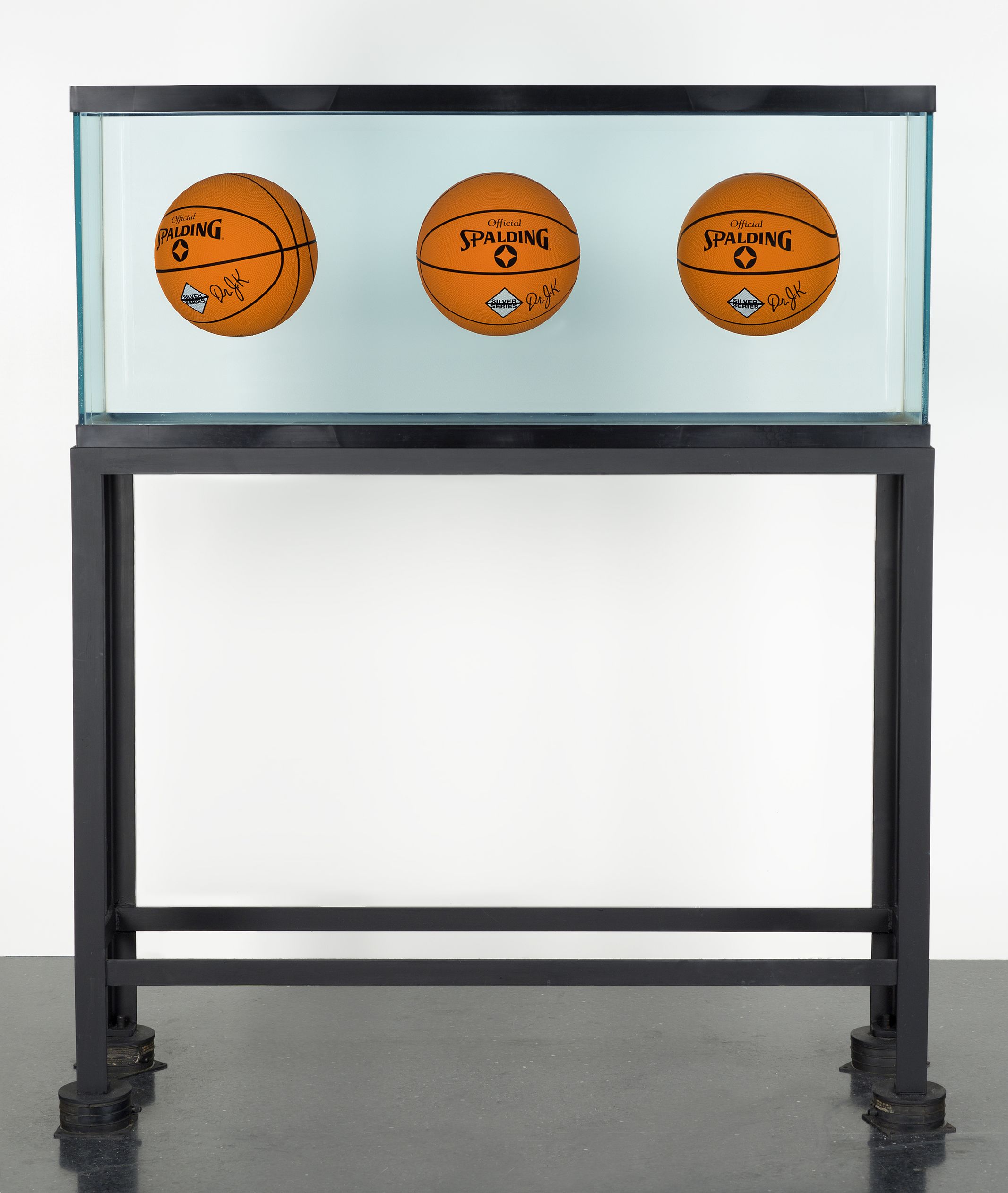 Sincerity, that most uncool of affectations, runs through Koons’ practice like an especially stout spine. It is the key to comprehending his works, the thread that binds them all together, and, for our purposes, the great granter of relief that we absolutely delight in, as so many have, his colorful mirrored surfaces and pop surreal paintings like the Madison Avenue nightmares that they are. He truly wants you to enjoy his work; he wants you to feel, as most artists do, but he wants it eagerly, and he will destroy his art, his finances, himself for your approval. Is it any wonder that one of his masterpieces is a giant floral puppy?

Read the major profiles on Koons, by Ingrid Sischy in Vanity Fair (twice!), for example, or Calvin Tomkins’ piece for The New Yorker, and the fact that Koons believes deeply in pretty much everything he has ever said—and everything he has ever made—comes shining through like the reflection off a chromed, oversized Venus of Willendorf.

“I decided that he was on the level and that he had virtually no sense of humor, about his work or anything else,” Tomkins concluded while weighing if Koons’ salesman-cum-motivational speaker vibe was schtick, a put-on, or just the artist himself.

Sischy drew similar conclusions. From the precedents set by Dali and Warhol, Koons, Sischy wrote, developed a persona as “a kind of art salesman, mischievous yet also achingly sincere.”

Don’t trust the journalists? Then take it from a man who spent time with Koons in that least sincere of industries: finance. I once interviewed the artist Andy Moses, who worked with Koons on Wall Street and attests that even that cobra-hearted culture could not diminish his candor. Moses even called me back after our interview to reiterate that Koons is “totally invested in everything that he does, in a deeply personal way.”

Deeply, personally invested, wide eyes and open heart! Can you think of an attitude that could more handily turn off the art world? Two perfect examples are on display at the MCA right now. A young Koons lights up vacuums—here, already, is the taste for the ironically expensive “banal” that will last his career—less as biting social commentary than as a celebration of their beauty. He creates a mesmerizing spectacle of basketballs floating perfectly suspended in a fish tank of water—there, peeking over the art-historical horizon, is a shark in formaldehyde—and sells these intricate, complicated and perishable marvels of physics with an instruction manual on how to refresh it, like a common appliance!

While Koons’ work retains many of the elements of Pop art, that earlier genre, as Tomkins noted, had enough irony to keep it cool. Whereas Warhol and Lichtenstein saw not only art but subversion and schadenfreude in their re-appropriation of popular imagery, and whereas Duchamp’s readymades sprung from the irreverence of Dada, Koons applies similar methods with the saccharine, wide-eyed and unquestioned belief that these images are really beautiful, no qualifier or affectation necessary. A mellifluous sincerity pours over his work and hardens like a candy shell, causing everything in his canon to gleam like a freshly licked lollipop.

Licked! Even the pervasive sexual imagery in Koons’ work is shaped by a corset of sincerity. “Made In Heaven”—this one, sadly, not at the MCA but a piece of it is at the Art Institute—depicts Koons and Italian porn-star-turned-politician-turned-Catholic Ilona Staller in explicitly sexual poses, sure, but it rendered them in gorgeous, chimerical glass, flawless marble, artificial and antiseptic plastic, and the whole thing with a sticky patina of love. Staller wears a flower headdress; Koons a lovestruck gaze; often both with cheeky rouging in homage to Renaissance cherubs. 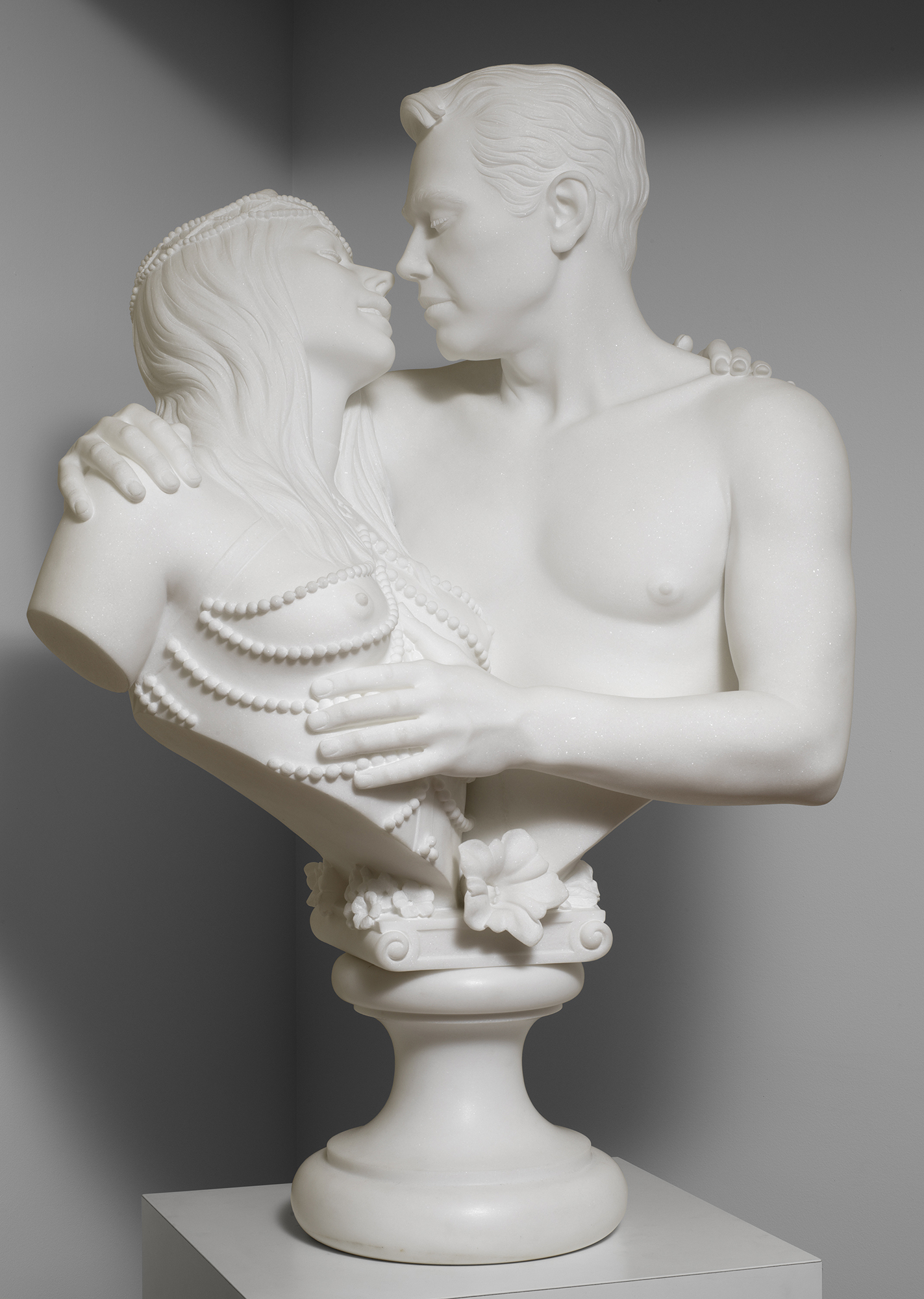 One of his most groundbreaking works, part of the MCA’s permanent collection, is often compared to the smooth, perfect forms of master Modernist sculptor Constantin Brancusi, but it’s a stainless steel version of a cheap inflatable rabbit toy. The rabbit, the enormously shiny balloon dogs, the immense puppies made of flowers, monumental mounds of aluminum-cast Play-Doh, Hellenic sculptures nestling front-lawn-kitsch gazing balls—all of these are Koons at his height, the perfect conflation of technical perfection, American industrialist ambition, soul-bearing, easy-parsed messages, good looking, and the viewer themselves, oftentimes literally in reflection in the works.

Love him or hate him, it would be difficult to talk about, revel in, and critique contemporary art today without Koons in the conversation, hence his importance in this survey of fifty years of being contemporary. Those who do not take him seriously beware: No one takes art more seriously, with a bleeding sacred heart on his sleeve, than Jeff Koons, and he wants you to love it, seriously, too. This evangelical streak, and the sincerity that drives it, is both what feeds the widespread, frothing detest for Koons—it must be a con, a put on, right?—and makes his works so compelling. They engender powerful emotions, regardless of what those feelings are, because they are meant to do so. They are inclusive in their advances, inviting you to join them; porn shaped by love, withering desire for his child in child’s playthings built to last forever; a rabbit as heavy and as light as the air we breathe.

Won’t you accept the invitation? All of these, and all of Koons, are sincerely yours.

See works by Jeff Koons and many others through April 1, 2018 in the fiftieth-anniversary exhibition “We Are Here” at the Museum of Contemporary Art, 220 East Chicago.