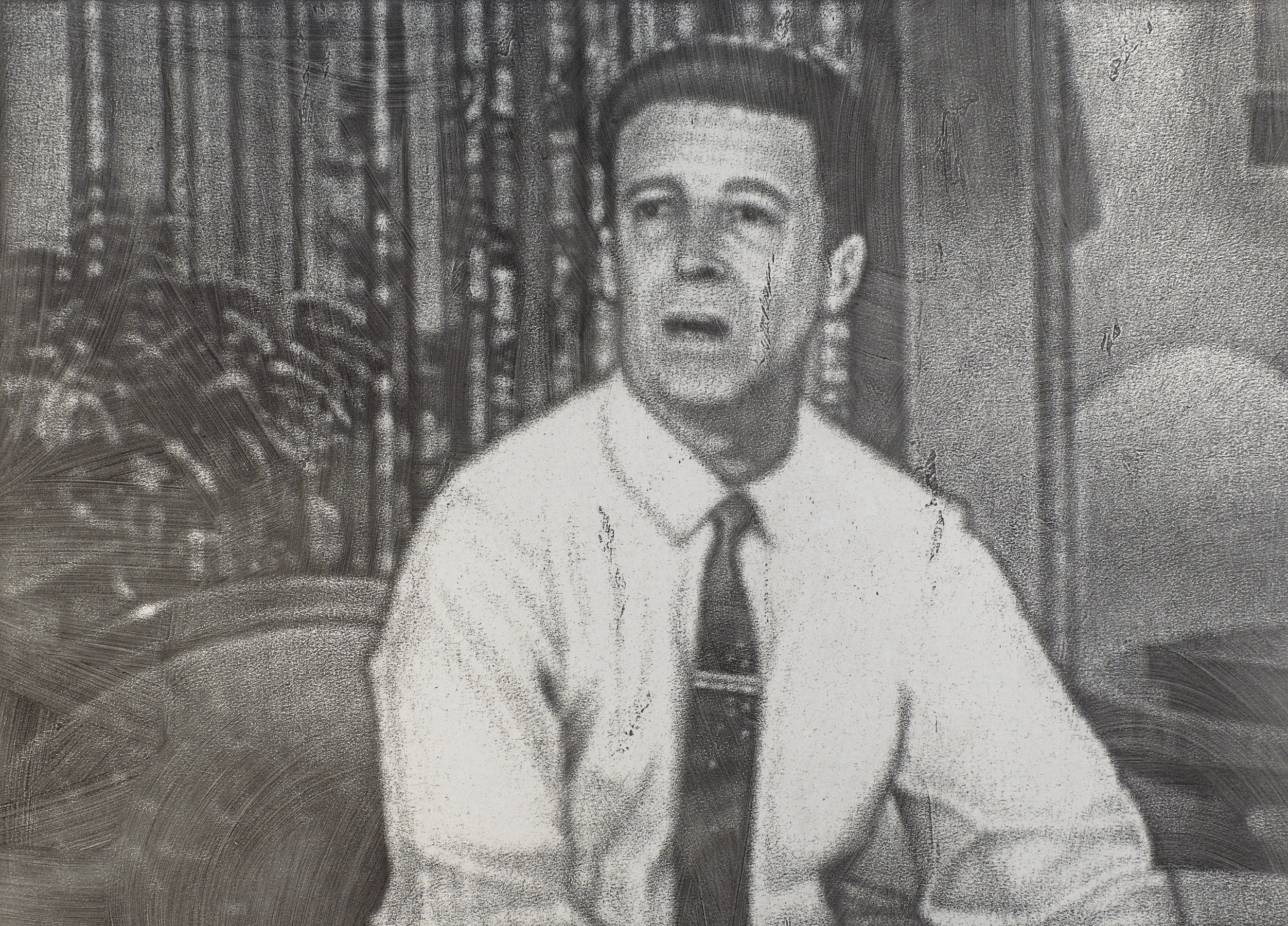 Were the 1950s in America really all this bad for white people? They continue to haunt the imagination of Peter Drake (b.1957) with dark, blurry images of young women with vacuum cleaners and young men with lawnmowers or grills. He presents a nightmare of witless consumerism and gender conformity exemplified by paintings based on screenshots from “The Adventures of Ozzie and Harriet,” a television sitcom from that era that is among his visual culture sources. I remember watching it on my parent’s small black-and-white television. It was puzzling. What did Ozzie do for a living? He was a nice, non-threatening male in comfy, button-down sweaters. But he was not especially clever and definitely not as funny as Ralph Kramden. Why would anyone want to watch him putter about the home and garden?

I’m also not sure why anyone would want to look at these grim monochrome paintings more than once. Their tones and edges have been carefully executed to deliver an ominous “true crime” effect, but they feel no more exciting than their subject matter. Perhaps viewers need to share the political conviction that they are looking at something scary and malevolent to appreciate them. A command economy is far more sinister for me, however, than the inevitable consumerism of a free market. And however oppressive gender roles may have been for some people, the triple-fold increase in single-parent households since 1960 does not argue against gender roles and norms. These paintings seem to approach the fifties with far more condescension than insight. 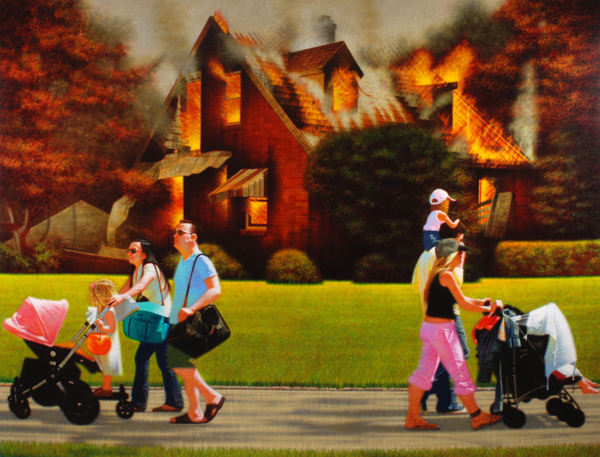 Drake’s paintings done in full color, however, tell a different story. Perhaps our quality of life improved with the advent of color television? Drake’s screenshots from the “Brady Bunch,” a saccharine sitcom that ran from 1969 to 1974, are painted with a delightful sense of luminosity, color and humor. Are Greg and Jan about to kiss while the housekeeper hurries out the bedroom door? Even Drake’s depiction of Mr. Suburban caressing the brand new siding on his house is more playful than ominous. Most enjoyable of all is the largest and earliest painting in this exhibit. In “Overlook” (2008) two middle-class nuclear families straight out of a Steven Spielberg movie push baby carriages across the sidewalk. They are oblivious to the blazing fire that’s engulfing the large suburban house behind them. Perhaps this suggests that they are foolishly ignoring the dark psychological and political secrets that undermine their lives. But, to the contrary, perhaps they are wisely ignoring death, the great destroyer, that is slowly but surely burning up all of us and whatever we love. This big, beautiful, ambitious painting—solidly held together within compositional triangles—made me stop, ponder and thrill at my own brief passage through American life.

It’s not difficult to guess what might have made the painter more pessimistic about our country in 2017 than he was in 2008. Hopefully, after the 2020 election, he will have reason, once again, to look on the bright side and perhaps paint screenshots from “Roseanne” or “Modern Family.” (Chris Miller)

Just happened on this post (having recently discovered PD’s work), and it speaks to my heart. A very underrated artist. I love the kind of cine-noir atmosphere that his work has. Google “Peter Drake” for more examples. He really deserves to be better known.
Regards,
J Hexham Northumberland

But you’re right, Hexham Northumberland – if you Google “Peter Drake” and sniff around, there is plenty of his stuff out there.

When I hear the name “Peter Drake” I quietly congratulate myself on my early appreciation of this fellow’s talent. He’s almost like my life “teacher” – the lessons that his work holds are absolutely manifold. Now he is much better known, and rightly so. Best regards, Elizabeth Queen