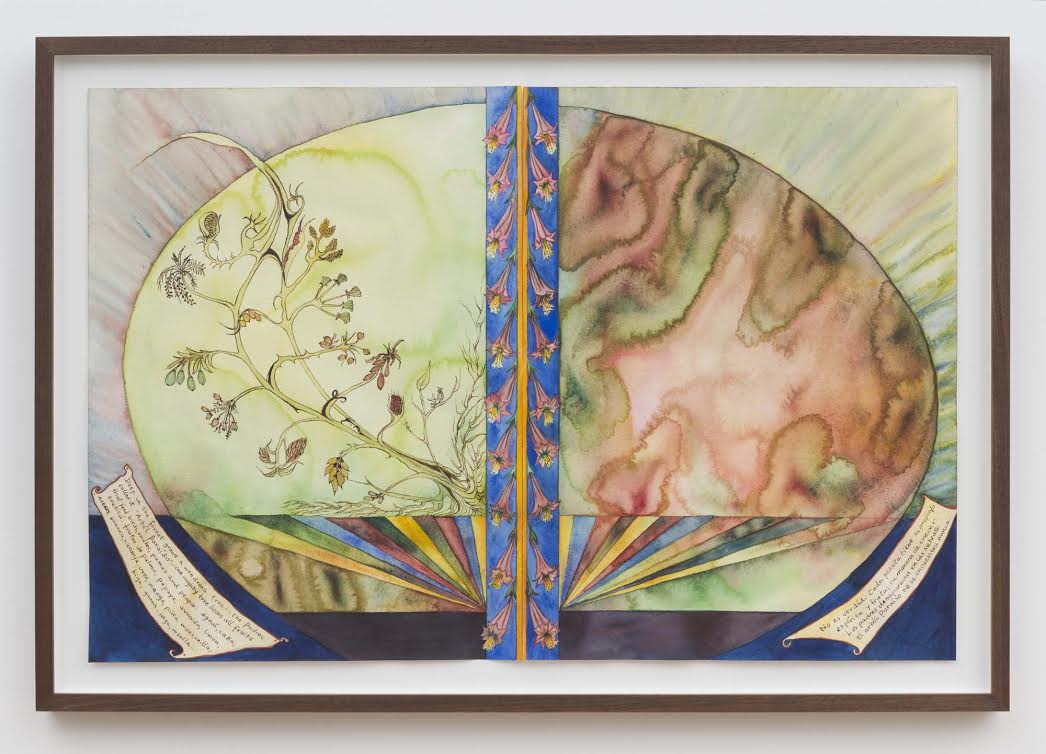 Better known for her seminal feminist performances, Faith Wilding has also produced a substantial body of work examining the intersection of indigenous politics and environmental catastrophe. Grounded in her unusual upbringing in the Paraguayan Bruderhof Anabaptist commune, these pieces blend memoir and myth, art and activism. This two-part show pairs a group of drawings and paintings made during the 1980s with a set of mixed-media works made more recently in response to similar concerns. The objects share some formal properties but Wilding’s practice has clearly advanced in interesting ways since the earlier “Natural Parables” series. The recent sculptures, reminiscent at turns of Franz West and indigenous “fetish” objects, have a good deal more to say about art’s role in the ongoing eco-critical conversations about the Global South.

The earlier series consists of large watercolor, pencil and ink drawings of fantastic and natural phenomena interspersed with Wilding’s handwritten reflections. Shaped masonite panels, painted to resemble leaves, pods and flowers, accompany the watercolors. Considered together, the series presents an idiosyncratic cosmos replete with hints of Blake and O’Keeffe. These very idiosyncrasies, and the ease with which they can be fitted into a long tradition of western art history, exemplify the degree to which the “Natural Parables” from the 1980s represent one of the less engaging entries in Wilding’s oeuvre. 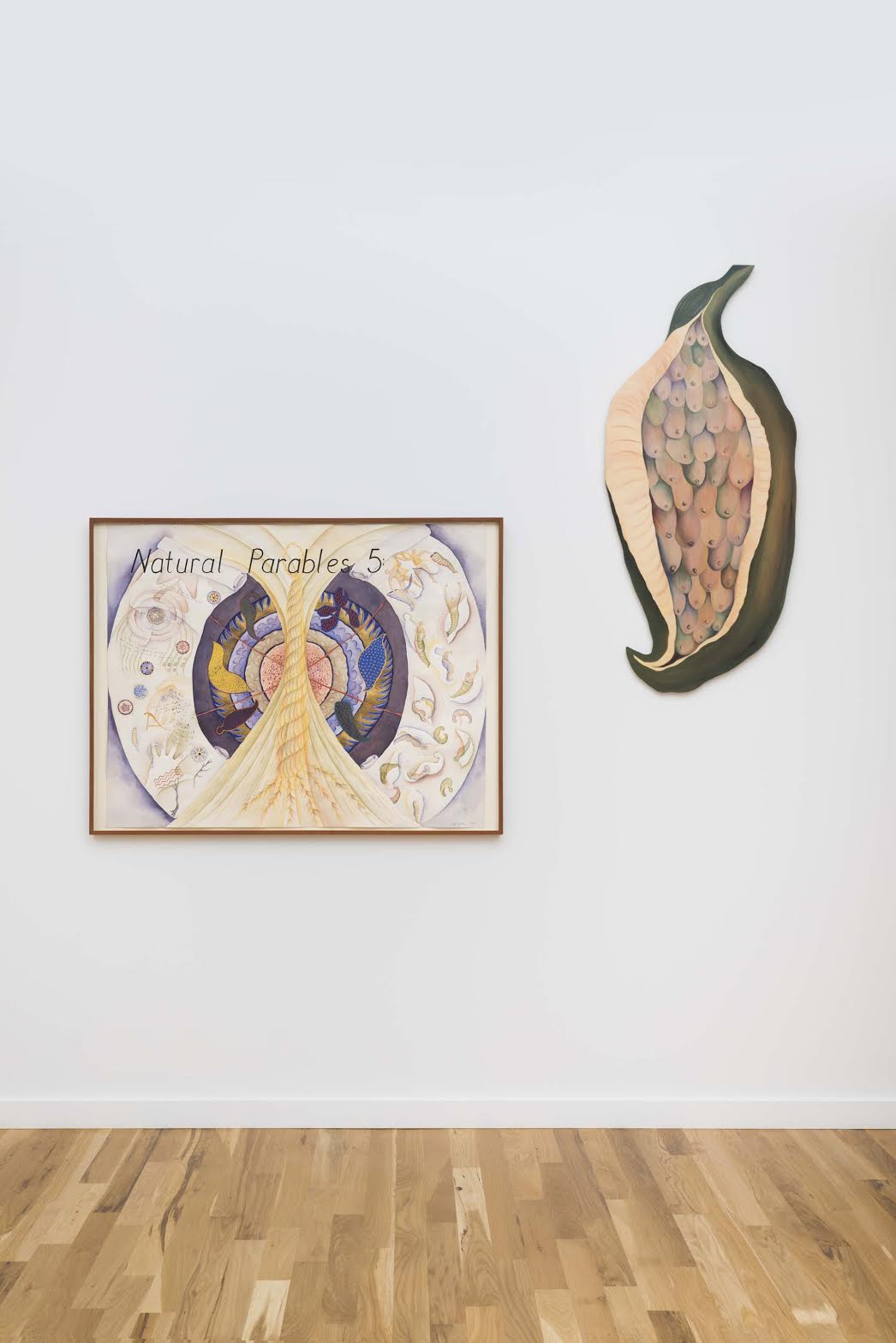 The more recent series, however, takes up the earlier visual vocabulary and places it in a more explicit political context. Small papyrus leaves, beautifully illustrated with gouache, ink and gold-leaf, cover the walls. In place of the inward-looking texts of the earlier series, Wilding substitutes multilingual passages detailing episodes from the corporate exploitation of the Latin American wilderness, often specifying their relation to indigenous modes of life. One leaf has the skull, spoon and fork of the Ñamoseke Monsanto movement in its center. Another stacks slogans like “Teach everything to everyone!” and “La via campesina” above an illustration of “Agro-forestales.” In the center of the room, a small cluster of sculptures crafted from papier-mâché and papyrus are covered in similar drawings and texts. Resembling both indigenous apparatus and recognizable art objects, they point up Wilding’s disquieting interest in engaging both worlds. Disquieting both because the sculptures themselves are haunting things, but also because Wilding raises—but does not answer—the question of what happens when indigenous art traditions are appropriated for the ends of protest or gallery display. 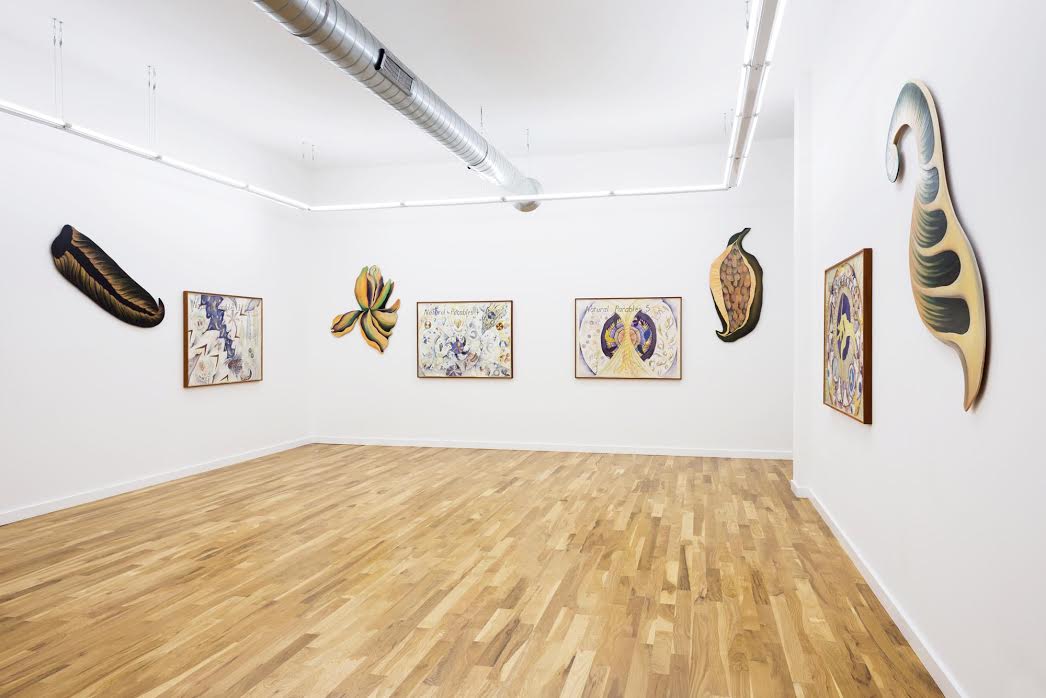 It’s not just that the works are more politically motivated, more attentive to a struggle that connects communities in North and South America. Wilding’s newer texts also speak explicitly with a “we” and, while this appeal to a pluralized first person makes the series more interesting, it also makes it more problematic. Environmental activists interested in claiming a common humanity, or a common responsibility to the earth, have tended to re-inscribe Eurocentric biases and erase the subjectivity of indigenous folks who have long held quite different relationships with the land. In the wake of Berta Caceres’ murder by a company supported by Honduran state agents and European capital, Chicago viewers ought to consider their own complicity in the forces wreaking havoc on indigenous ways of life in Latin America. This show provides a welcome opportunity to reflect on these issues through the medium of art. (Luke A. Fidler)