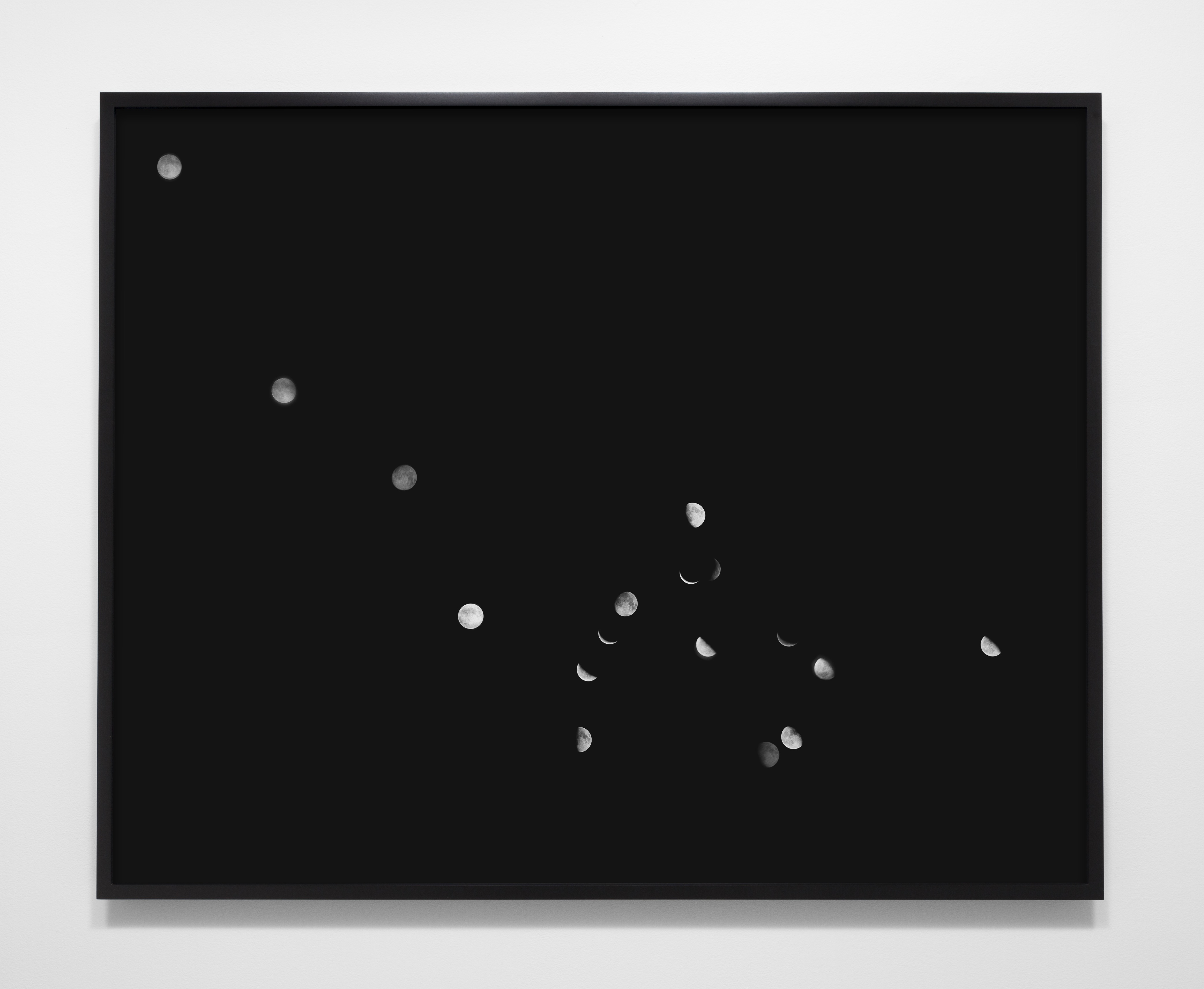 During a stay in the secluded Blue Ridge Mountains of North Carolina, Carrie Schneider stepped outside every evening throughout a full lunar cycle to photograph the moon as it rose and set. Using a medium-format camera, Schneider exposed the same rolls of film on a nightly basis, at times rewinding it and shooting multiple exposures in one night, compressing phases of the moon into richly layered negatives. The captivating results, on view in “Moon Drawings,” Schneider’s fourth solo exhibition at Monique Meloche gallery, are documents of both the solitary nightly ritual and of the artist’s distant cosmic subject used as a source of reflected light. 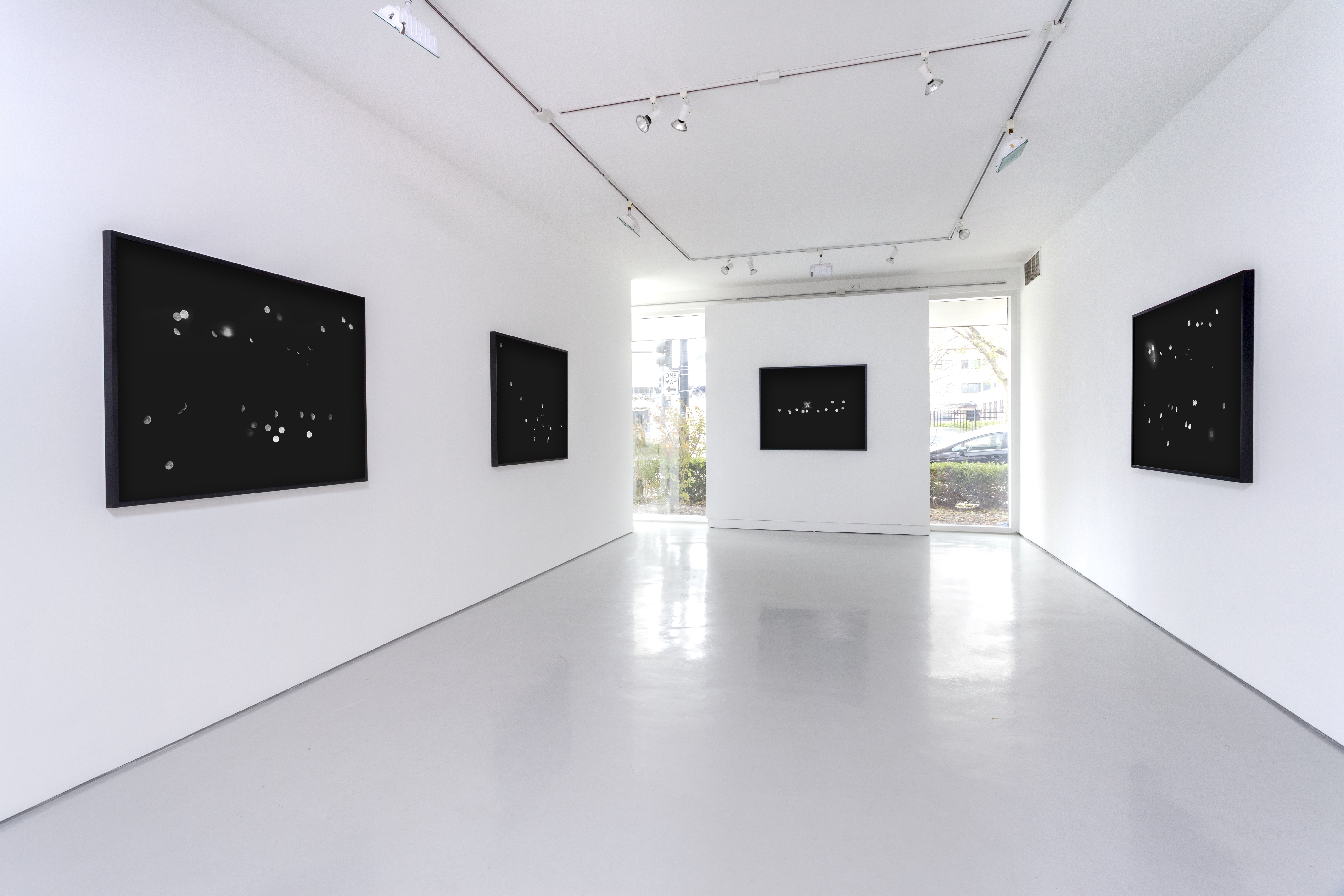 Waxing and waning simultaneously, the multiplied moons floating in each photograph form new constellations and imperfect grids. At certain points, the moons overlap, their densities and fullness shifting from wispy, delicate slivers to full, bright orbs. Some seem to dissolve into the endless, inky night sky. In particularly striking moments, a haze of clouds gathers around the moon, glowing like an aura, while from certain angles, the moons appear to hover slightly above the photographs’ surfaces. The effect is not unlike gazing at the moon itself: an act that can feel strangely disembodying when we stare long enough, momentarily forgetting our footing on the ground. Appropriately, the images are nearly impossible to casually re-photograph—a bit like the futility of fully conveying one’s experience to another. 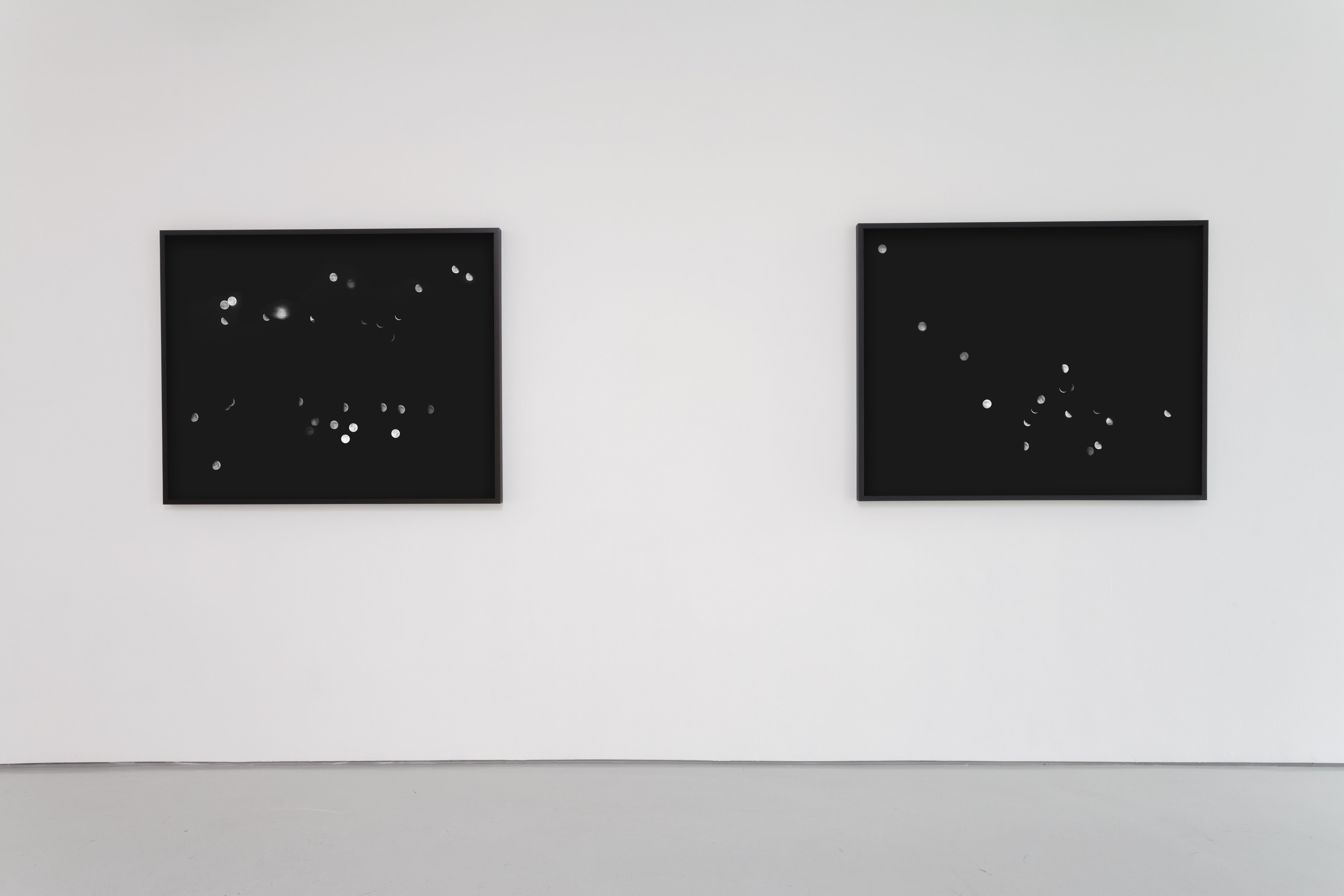 While the title nods to the etymological roots of photography—“to draw with light”—it also evokes the presence and movement of the artist’s hand, along with the elements of chance, improvisation and intimacy bound to the act of drawing. Although the only visible subject in “Moon Drawings” is the moon itself, the compositions are far from empirical studies that neatly plot lunar movement; they are imprecise and fully human. Schneider might be best known for carefully staged photographs and films that probe at the complicated threads of human intimacy and selfhood, but her “Moon Drawings” point to an ineffable intimacy between the self and the cosmos. Rather than freezing the stillness of the night sky, Schneider’s photographs capture the paradoxical constant and elusive nature of the moon, nearly always in sight, but impossible to reach out and touch. (Elizabeth Lalley)