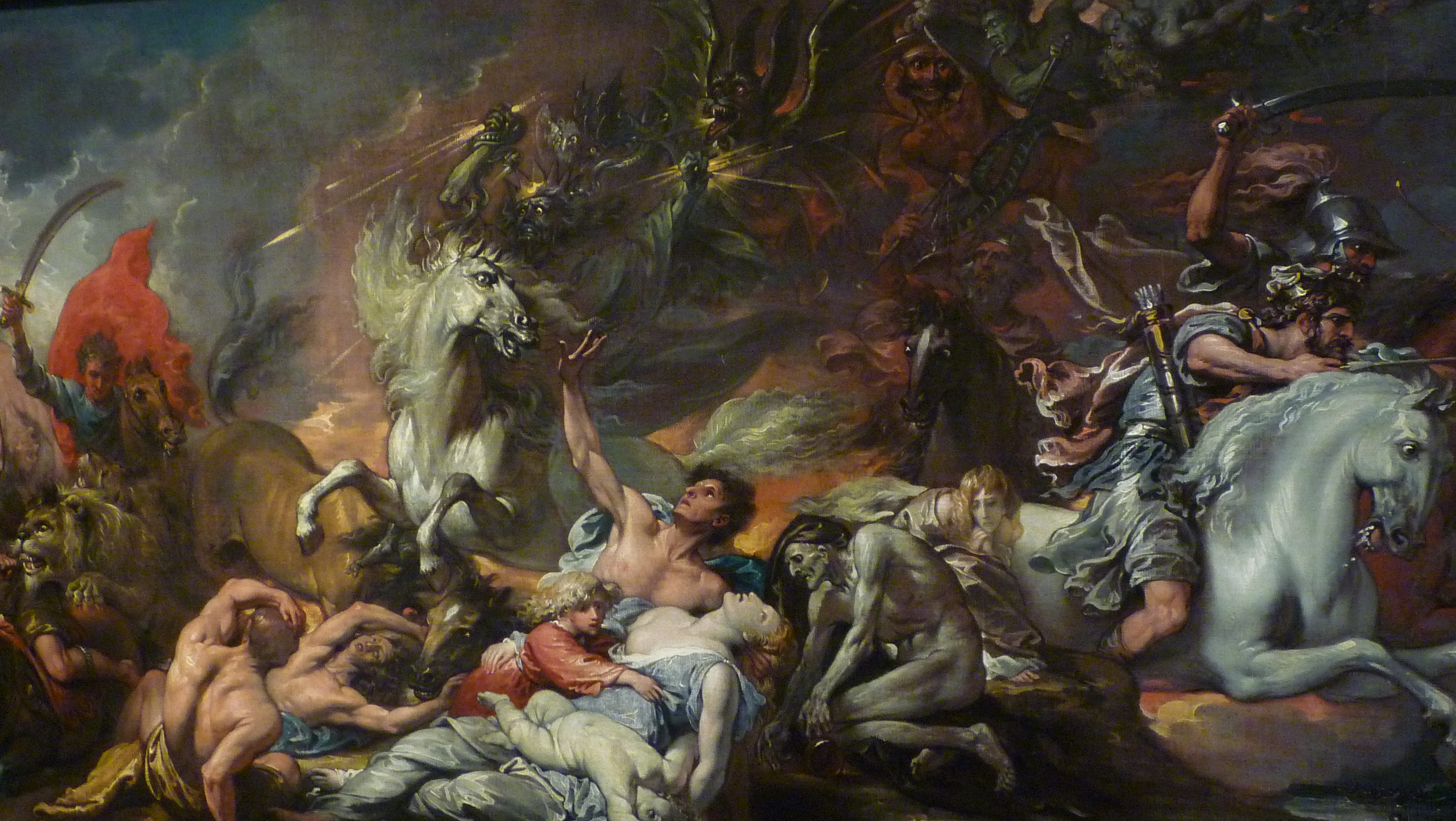 If only Hogarth, Gillray and Sayers, the great pioneers of political cartooning, could dispatch their wits on the right-wing American politics of today. The sincere religious belief that God will end the world tomorrow fits all too conveniently with the financial pursuit of short-term profit. In late eighteenth-century Britain, however, eschatology converged with anxiety over the French Revolution. The medieval social order was coming to a bloody end and British leaders were running around like headless chickens.

Prints by James Gillray and James Sayers make fun of their nonsense, most notably Gillray’s “Presages to the Millennium” (1795). A buck-naked Prime Minister William Pitt rides his apocalyptic horse roughshod over political opponents while an impish Prince of Wales kisses his bony ass—all in fulfillment of a prophecy by one Richard Brothers, a nutcase who announced that he would be revealed as “Prince of the Hebrews and Ruler of the world” on November 19, 1795.

It was the sublime aesthetics of vast destruction, however, that appealed to British Romantic painters like John Martin. “”Throughout his extraordinary performances, the magic of linear and aerial perspective is substituted for that great level of our sympathies, the portrayal of passion and sentiment… the higher attributes of art,” as a contemporary architect wrote. And I agree. Martin did not study at the Royal Academy or grow up in a country estate filled with old masters paintings. His taste was not upper class. His aesthetics were more about astonishment than refined contemplation; more about dramatic stagecraft than poetic form, color, tone and line. He was the George Lucas of his day, using visual technology to thrill a broad audience, and his spectacular visions remain entertaining two centuries later.

There is sharpness, clarity and brilliance in Martin’s mezzotints absent from other, murky, fuzzy and stuffy prints in this show. Thomas Milton’s etching is a miserable variation on Philip de Loutherbourg‘s luminous oil painting, “The Deluge.” Prior to the development of photography, etching was more a means of image proliferation than a graphic fine art. One of the master etchers in this show, Joseph Haynes, delivered a series of lectures condemning the low aesthetic standards accepted by greedy publishers. Appropriately enough, his etching “Death on a Pale Horse” is more brilliant and exciting than John Mortimer’s original drawing as seen online. It’s also much better than Benjamin West’s oil painting on the same theme. West’s silly histrionics are somewhere between the sublimity of the Romantics and the ridicule of the cartoonists.

Despite the many original prints in this show, it’s a 1951 photo-facsimile taken from William Blake’s “Jerusalem” that presents the most serious, beautiful and effective art. With neither mockery nor showmanship, it expresses a sincere yearning for a full and complete spiritual life. The cataclysmic end of an old world becomes less important as one approaches the birth of a new one. (Chris Miller)