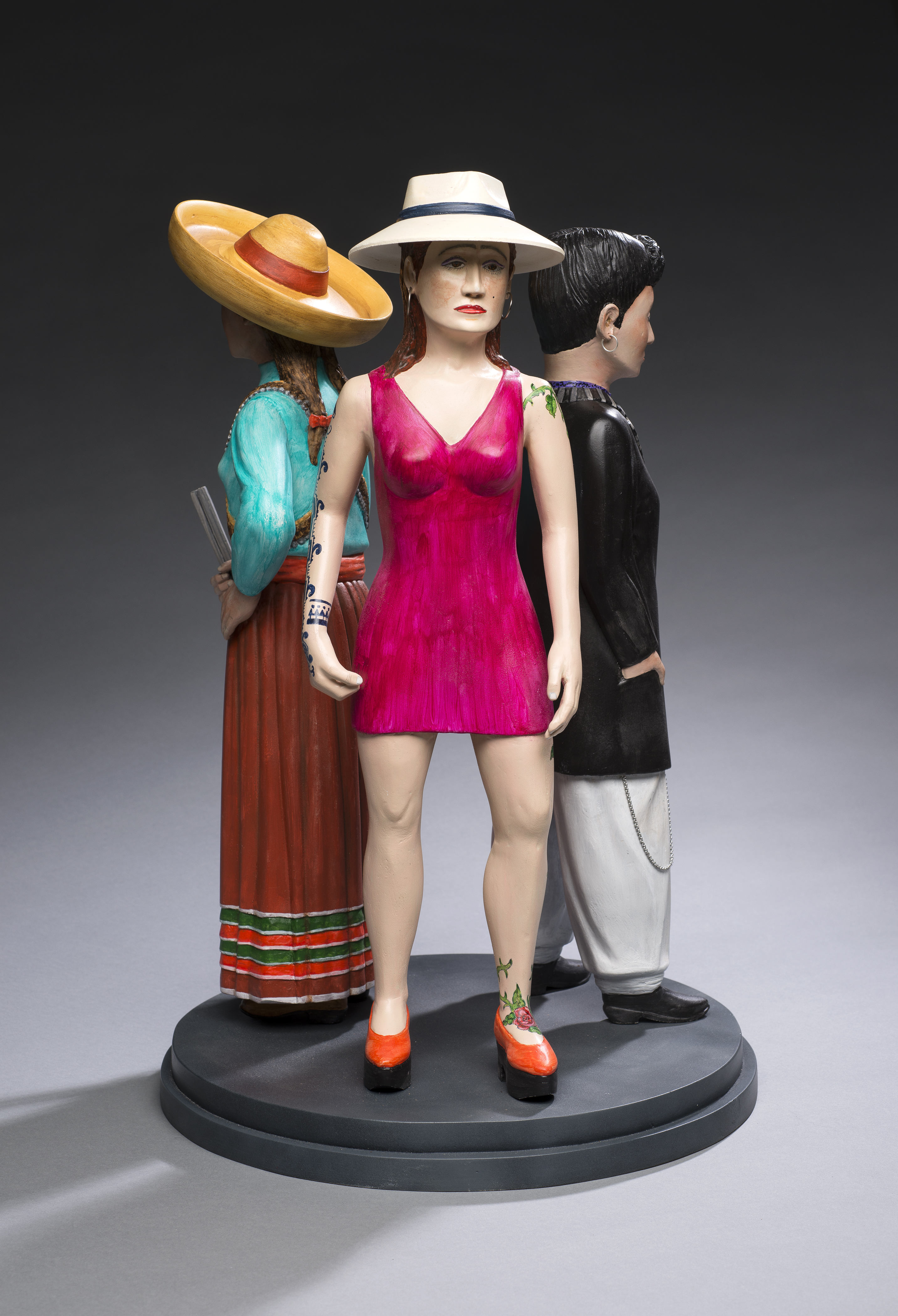 Like so much of the art that passes through the National Museum of Mexican Art, the sculptures in this show conflate the sacred and political in a heartfelt, familial way. “Chuy”—the Mexican nickname for Jesus—is represented as a landscape laborer, pushing a sorrowful world in his wheelbarrow. Saint Juan Diego wears an El Azteca Taqueria t-shirt adorned with an image of Lupita, the Virgin of Guadalupe. In another work, Lupita herself mourns those who died crossing the Mexican-American border. Whether or not this conflation clarifies the issues raised, it does express a passionate, holistic village life that predates our profit-centered corporate world. What keeps Tapia’s work from descending into nostalgia is the vigor and crispness of its execution. These pieces do not resemble toys or tchotchkes. They are cheerful and eye-catching, yet not flabby, silly or banal. Formal energy makes them serious enough to carry the conviction of the best sacred art. Tapia is especially good at giving plain faces wonder and power. The folds in the clothing beneath them have a solid inner rhythm as well as expressive character. The clunky jeans of “Techno Loco” are as nerdy as the kid who lives in his smartphone, while the trousers of the pachucho dandy feel suave and elegant.

Perhaps these pieces are too worldly to belong in the quiet sanctuary suggested by the title of the exhibit, but like sermons in a church, they often chastise bad behavior. The “Two Buddies with Vices” share an enthusiasm for nothing more than alcohol. The “Black Heart” of abusive priests traps innocent children. The “Seven Deadly Sins” are encased in a glass box where, like venomous snakes, they can be carefully identified by young people. Tapia is defiantly outside the tradition of Modernism that has been liberating personal behavior from moral restraint since the days of Picasso and Gauguin. In “Cruising Hollywood,” he pays tribute to his friend, Gilbert “Maju” Lujan, a predecessor in Chicano art. But instead of going to art school, like Lujan, Tapia began his career carving traditional devotional figures called santos. Combining those skills with community activism, he is more a teacher and village elder than what we typically call a contemporary artist, and he sees women as the backbone of the community. In one piece he celebrates his abuela, who carefully walked him past a sidewalk strewn with liquor bottles and drug needles. In another, he celebrates a lively young “Barrio Barbie” wearing a radiant festival headdress. In “The Three Graces,” he presents three ideals of women from Mexican-American history: the gun-toting Adelita revolutionary, the zoot-suited Pachuca and the tattooed, free-spirited, Chicana. Curiously, none of his characterizations of men are this strong. 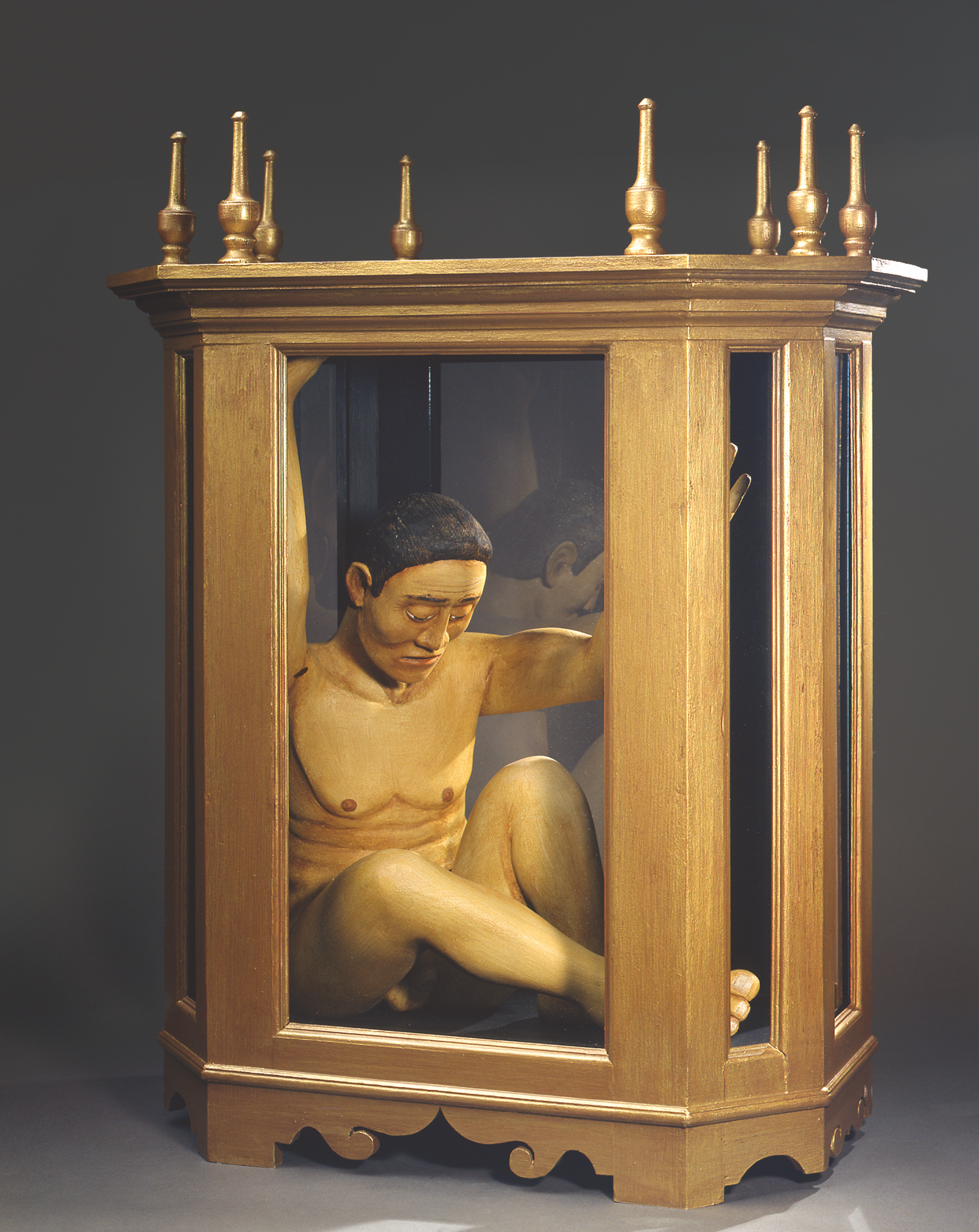 Tapia does not express much interest in himself. But “Man Trapped in His Religion” (2004), the earliest piece in the show, may depict his own spiritual crisis. It presents a confused, middle-aged man trapped within a glass box. Being naked, it appears that carnal, rather than intellectual energies are yearning to break free from religious teaching. Many of Tapia’s pieces feel like well-crafted political cartoons. The message delivered by this piece is just as fervent, but far more ambivalent, while attention has been paid to both the human figure and the space around it. I wish he worked this way more often.