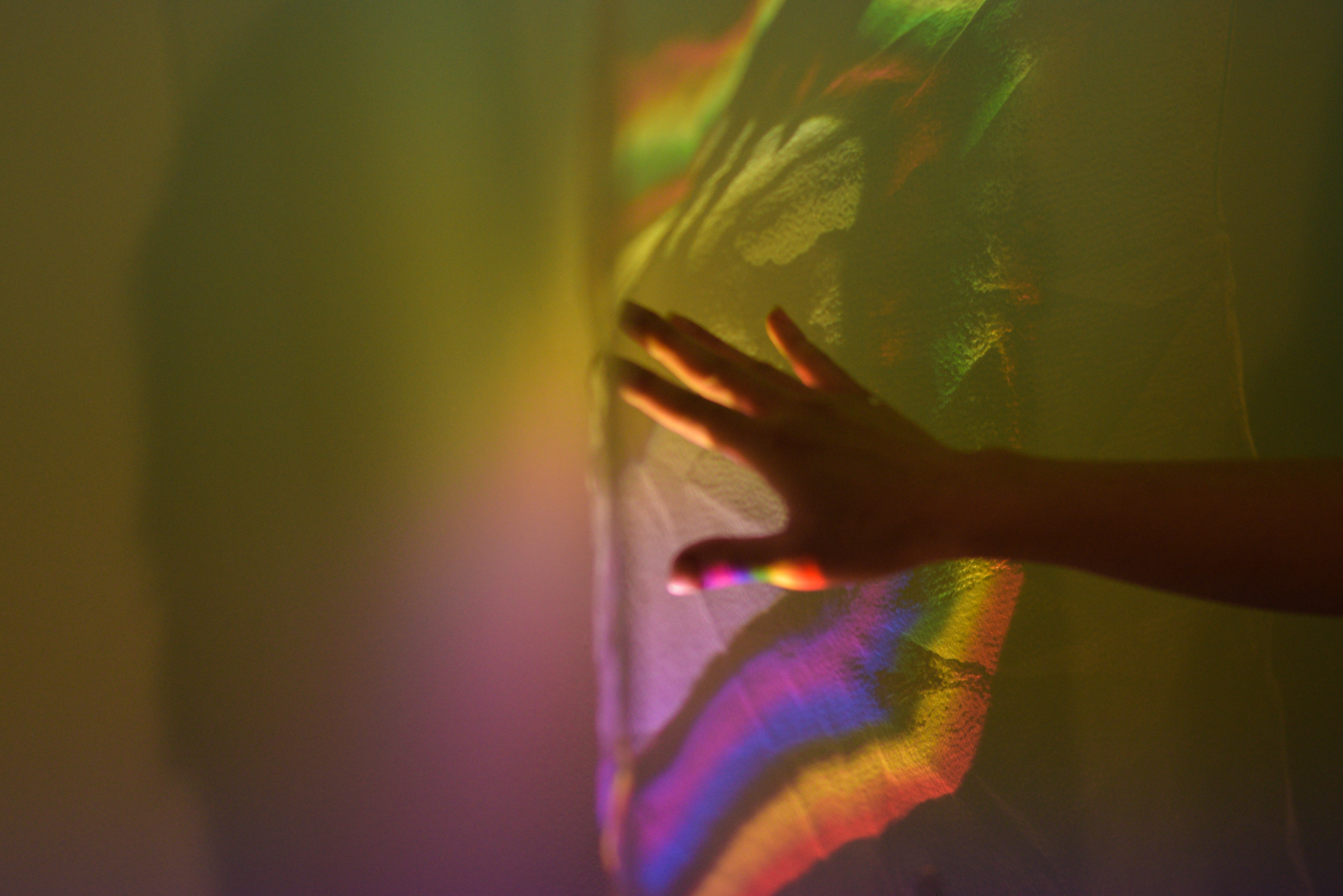 As I argued in a previous review, the “Her Environment” series is one of the most vital curatorial ventures currently in Chicago. Showcasing the practice of feminine-spectrum new media artists, the series not only stages a welcome intervention in misogynistic institutional structures of critique and exhibition, but also consistently presents thought-provoking work about the intersection of gender and aesthetics. The latest iteration—featuring installations, performance, sound and video games—traces a diverse set of themes including archival research, colonialism and globalism. Put this way, the exhibition might not seem to offer much new prima facie. After all, contemporary art museums have larded their offerings with superficial takes on colonialism inter alia with growing zest over the past decade. But the curators of “Murmurs and Palpitations” have wisely chosen art that embeds these concerns in a very particular nexus of bodies and media. It’s not often that a group show’s thesis hangs together well, but this show makes a persuasive case that the predations of global capital are felt both intimately and urgently.

Mitsu Salmon’s “Formosan Wood” exemplifies what I mean. The piece engages with the artist’s great grandfather, famed botanist Ryozo Kanehira, whose work included research in Japanese-occupied Taiwan. Salmon has drawn in watercolor some of the specimens collected and described by Kanehira. The drawings are subdued reflections on an archive rich in colonial, scientific and personal history. Although she fleshes out the piece with a filmed performance and additional objects, Salmon’s drawings present the show’s leitmotifs most clearly. We cannot disarticulate our knowledge of the natural world from imperialism’s ebb and flow, nor can we tell the past without giving something of ourselves.

Their studied quietness recurs in works like Tahutahu Studios’ “Idearum” game and Hifsa Farooq’s “Two Fans,” a deceptively simple video which shows two household fans rotating, in turn, toward and away from each other while wrapped in a single textile. They bring to mind Félix González-Torres’ famous clock pieces in which the asynchrony of everyday things symbolizes the push and pull of relationships. The cloth’s Pakistani pattern also puts the work in dialogue with one of Laurence Rasti’s most iconic images from her “There Are No Homosexuals in Iran” series—recently shown at the Museum of Contemporary Photography—which shows two male lovers concealed by a single Persian cloth. (Farooq writes that her piece references, in part, the culturally specific problem of arranged marriages.) “Two Fans” should thereby be understood in a tradition of image-making about queer intimacy that extends beyond the Euro-American world. 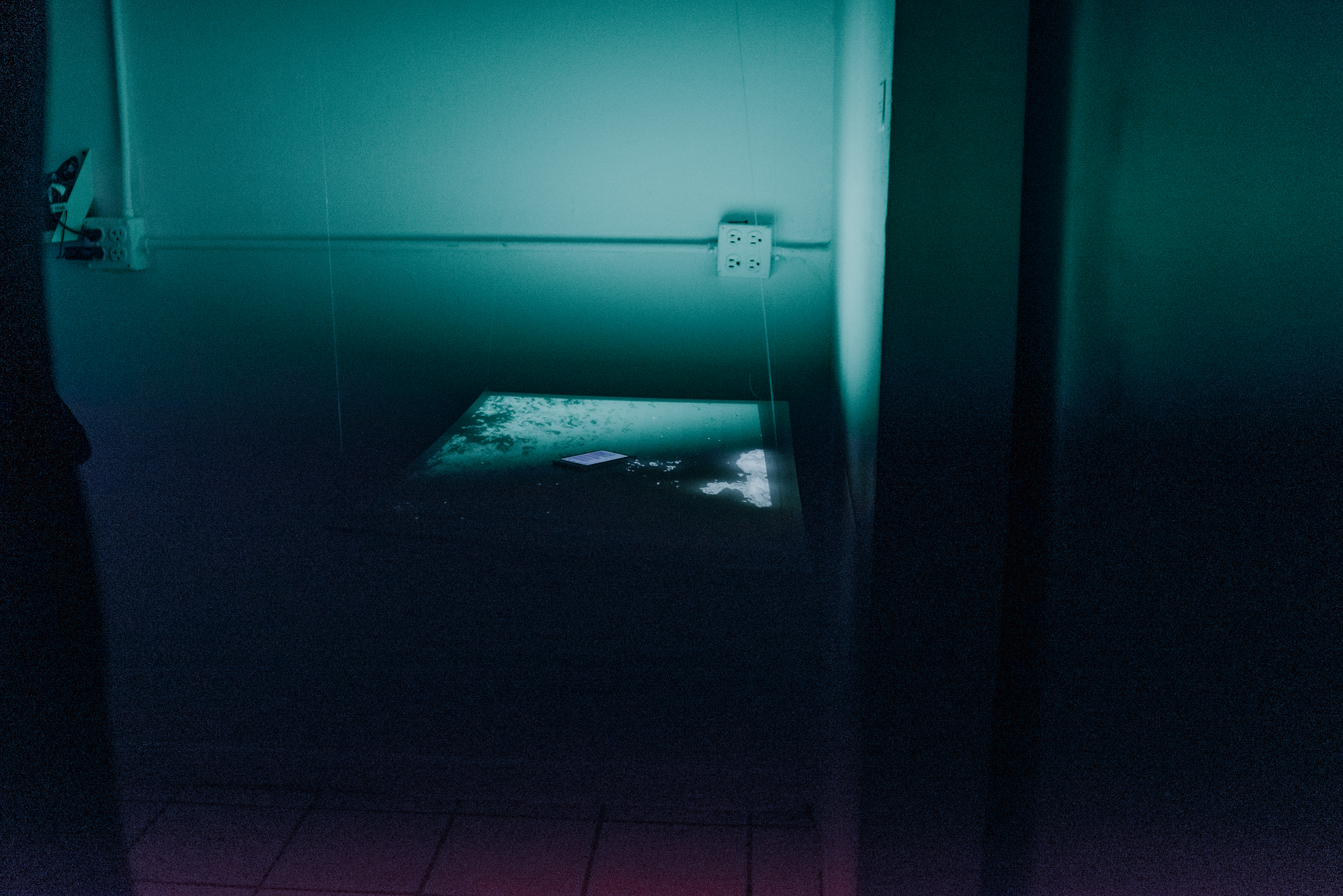 The show is strongest when it transposes aspects of the digital world into physical media. Hannah Newman’s installation projects a single-channel video of shallow water onto a suspended screen. An iPhone lies at the screen’s center where it receives a steady stream of text messages. As a companion pointed out, the phone is an older model; its constant pings and its squat, outdated body seem to deliberately reference a time when digital technology’s promise to fully, unproblematically connect us all could still be taken at face value. Samantha Fickel’s “Touch Screen” consists of a fabric membrane that, when stroked or prodded, interacts with a projected beam of multicolored light. Crucially, pushing the screen too hard destroys the effect. Twenty-three years after Paul McCarthy satirized the violent masculinity of Abstract Expressionism,  Fickel’s meditation on our ever-present digital touch screens also suggests that the artist’s relationship to the painterly ground might best be construed as one of care. Rena Anakwe’s immersive basement installation strongly signals this concern with care—both bodily and psychological care—and I recommend it as a starting point for this decidedly compelling exhibition. (Luke A. Fidler)

“Murmurs and Palpitations: Her Environment #7” shows through January 27 at TCC Gallery, 2547 West North.

[…] Between the Body and the Touchscreen exhibit […]