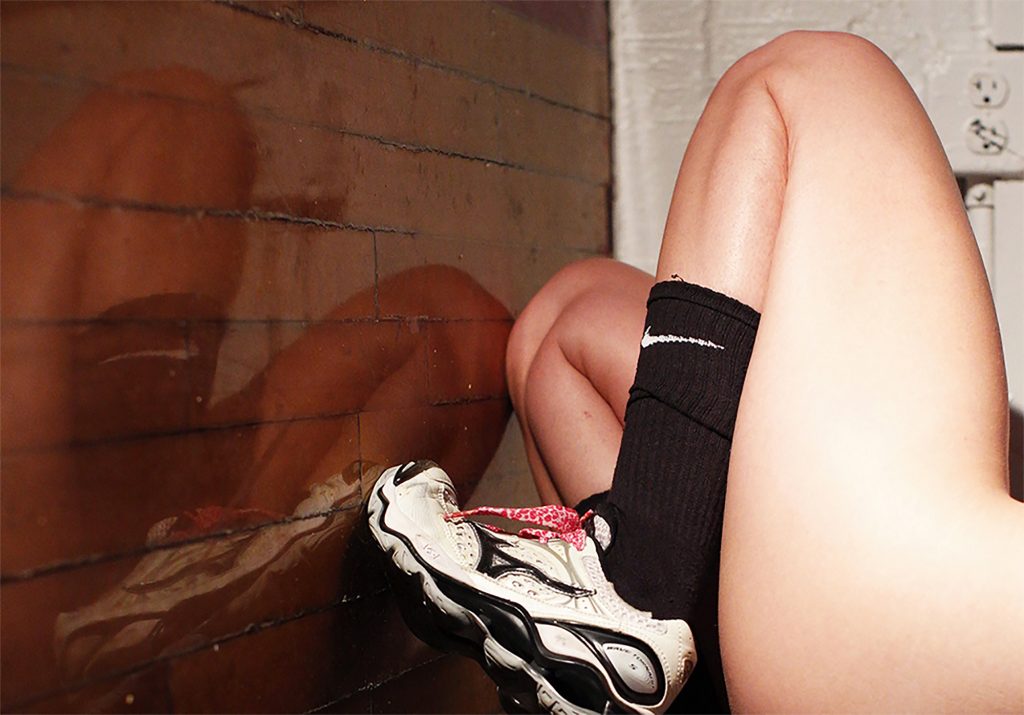 Art and sport have a long history of poaching each other’s images. Take the bronze and copper Apoxyomenos statues popular among the ancient Greeks. Depicting an athlete scraping oil and sweat from his body after exercise, these statues thematize the attention that both sculptors and wrestlers pay to surface detail; as the art historian Richard Neer points out, the Greek word ascesis signified both physical exercise and the “forming, modeling activity of the craftsman… an ascetic is anyone who goes to work on him—or herself, who crafts him- or herself.” While some of the works in this group show—notably Jacqueline Surdell’s photographs and video work—play with this double meaning of ascesis, most take sports as a kind of whimsical subject for art or examine the increasingly overdetermined relationship between sports and American politics. These choices are, in themselves, indicative of the vexed relationship artists have with the athletic world of the early twenty-first century. After all, the best contemporary work made about sports has tended to look away from the athletic event or even from the athlete themself; Douglas Gordon and Philippe Parreno’s exquisite “Zidane: A Twenty-First Century Portrait” might focus obsessively on a French soccer star, but it insistently directs our attention to issues of spectacle and spectatorship. 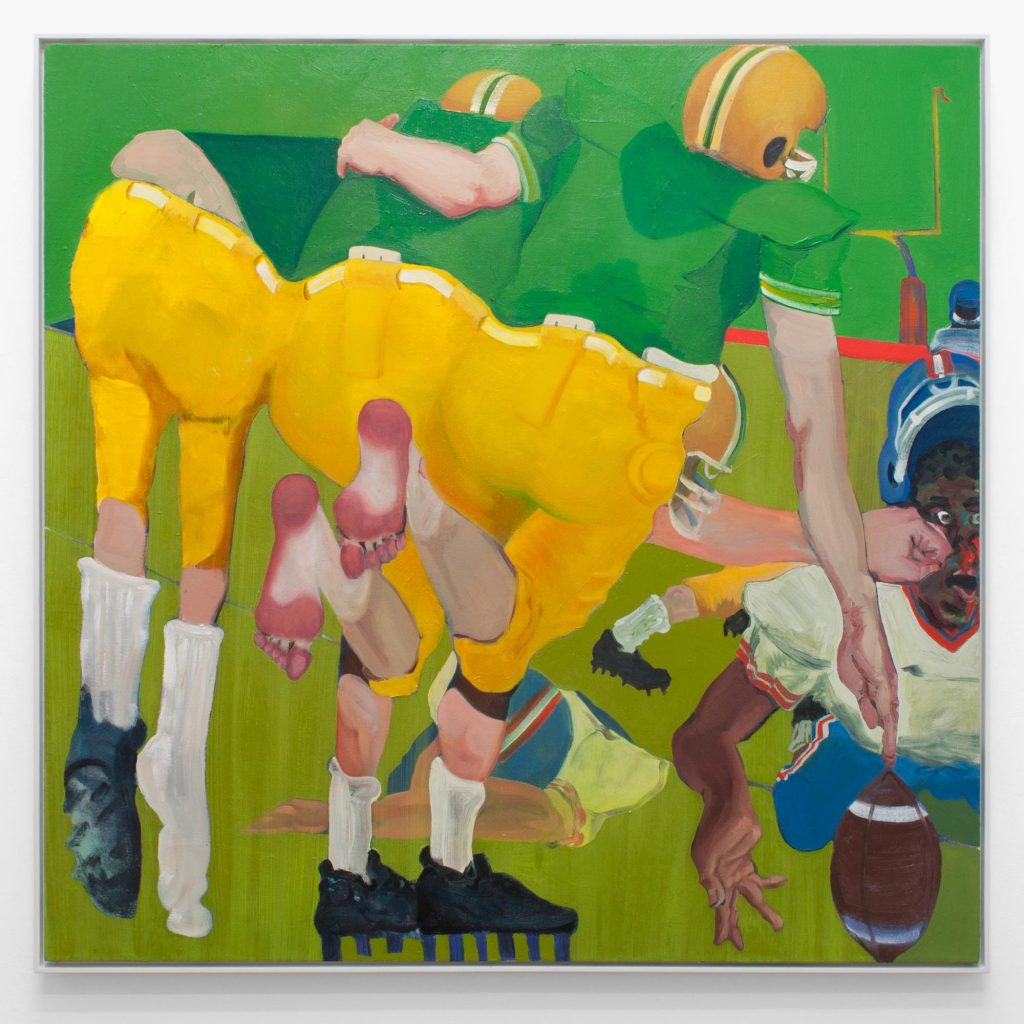 Examples of sport as a whimsical subject in the show include Ethan Gill’s humorously crude paeans to the Green Bay Packers. Of Gill’s paintings—as well as the drawings by Karl Wirsum and Wesley Willis—their sporting content is the least interesting thing about them. The salient features of “God Giving Aaron Rodgers His Talent” are the Lord’s multiple knuckles and the goalposts set against the sun in an ominous background, rather than the substitution of Michelangelo’s Adam for the Packers’ quarterback. Is this a problem? Perhaps. Gill’s paintings might reference a concern with fandom that calls “Zidane” to mind, but their intriguing formal qualities are easily overlooked when we shift our attention to their iconographic content, as the exhibition’s premise seems to insist that we do. In an essay that sparked the show, curator Abraham Ritchie named Michael Darling’s blockbuster exhibition “Kurt” as a theoretical precursor to “Hand-Eye Coordination.” Shows that take a single referent as their organizing principle, whether a musician or cultural movement, risk riding roughshod over the artistic intelligence of particular works. 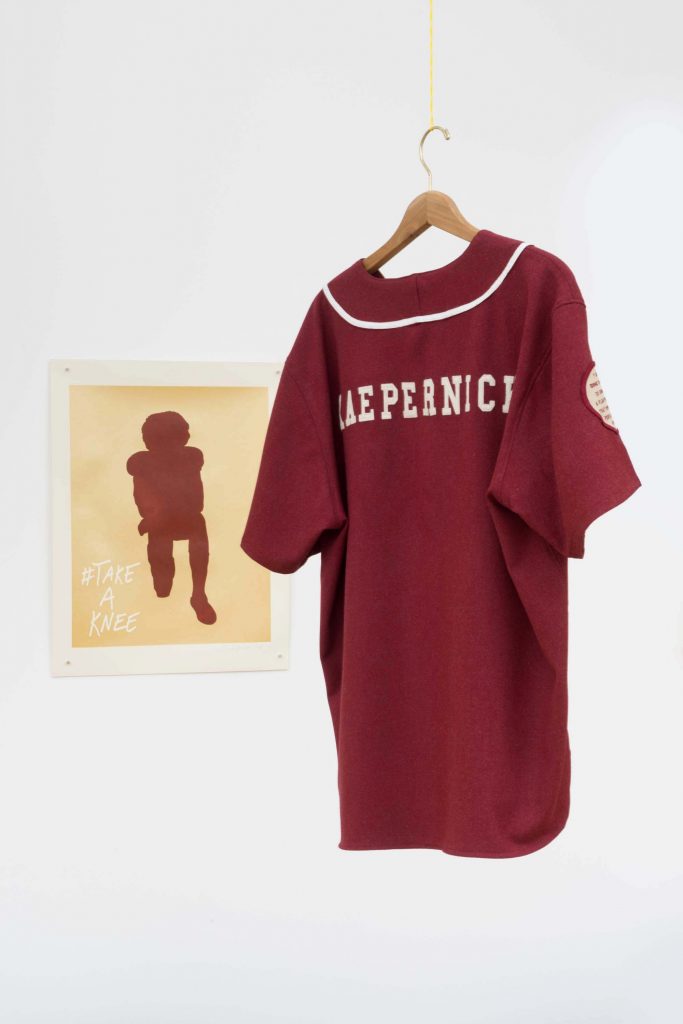 Examples of political engagement include Nicolas Lampert’s screenprint and handsewn jersey, both of which present Colin Kaepernick in the visual vocabulary of the Civil Rights Movement. The shirt resembles a baseball jersey from the time of Jackie Robinson, and the print—a key technology of modern political activism, as Lampert himself has shown —connects Kaepernick to pioneers like John Carlos and Tommie Smith, whose raised fists at the 1968 Olympics are also celebrated in Lampert’s screenprints. But if Lampert’s pieces take the political dimensions of sport seriously, other works do not. “Bad at Sports,” the Chicago institution represented here by a large, eponymous neon sign, has made ridiculing athletics shorthand for caring about contemporary art in much the same way that poking fun at jock culture became a rite of passage in nerdy films, their impressive contribution to contemporary art discourse via podcasts and blog entries notwithstanding. This sort of crudely unimaginative attitude is exemplified by Dutes Miller’s collages of sweaty men wrestling oversized cocks. The charge of brute phallocentrism does sports a disservice. Professional athletes have been among the most outspoken critics of police brutality, women’s sports have never been more profitable, and athletes like the U.S. women’s soccer team and the Northwestern University men’s football team recently waged high-profile battles for equality and fair compensation that inspired labor organizers across the country. Of course, sports has long been a site for thinking about gender in ways both nuanced and unsubtle and Betsy Odom’s “Softball Bat,” replete with phallic wilt, addresses this locus of issues more generously. 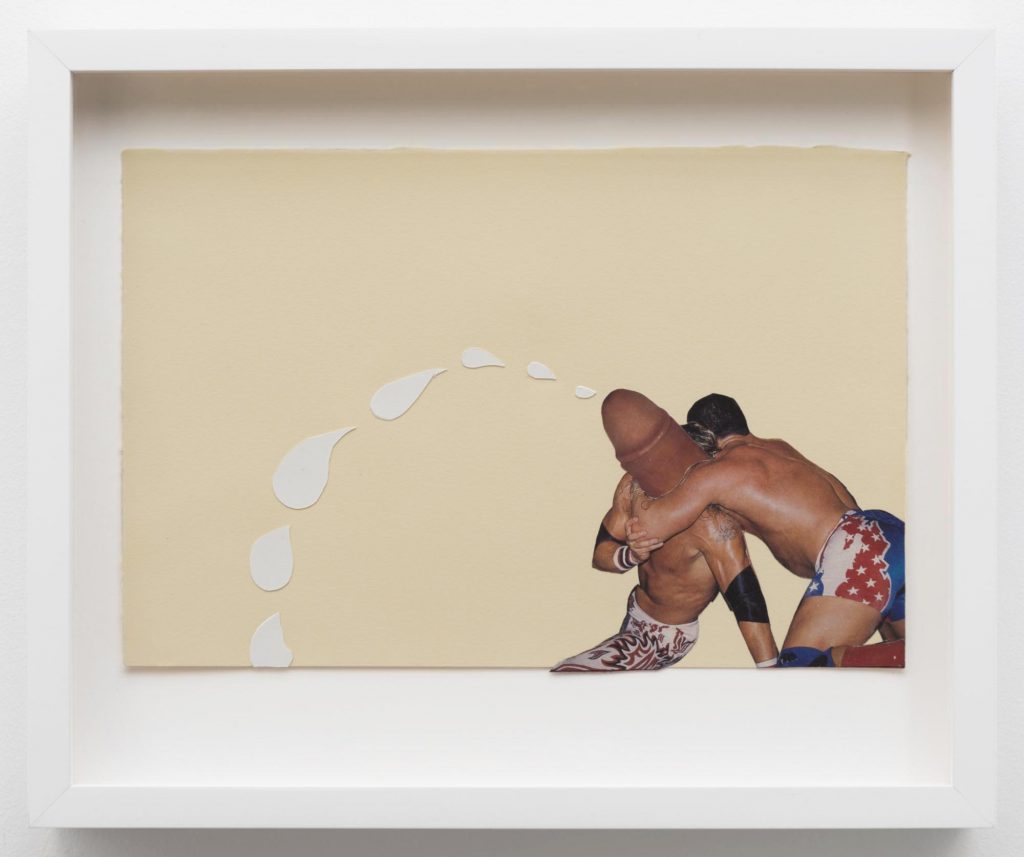 Few of the artists engage the deeper dimensions of contemporary sport and, as a consequence, many of the pieces feel like lazy, superficial takes on an outdated image of athletics. Compare Miller’s caricatures to the scores of brave female gymnasts, reclaiming their bodies and sport from a sexual predator, whose images have populated recent newsfeeds. Moreover, much of the art will be familiar to regular Chicago gallerygoers: Cheryl Pope’s pennants were recently shown at the Chicago Cultural Center and David Leggett’s painting collages at the Logan Center’s gallery. A few thought-provoking efforts aside, “Hand-Eye Coordination” feels like a missed opportunity to examine an increasingly significant slice of American political culture. (Luke A. Fidler)