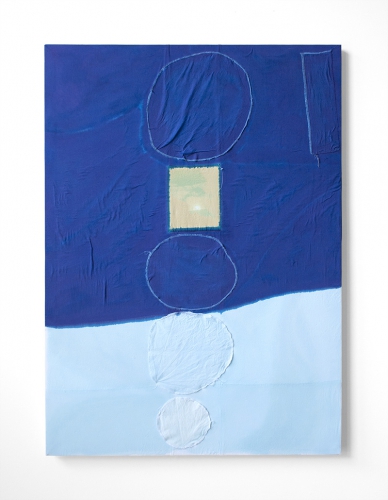 A bouquet of yellow long-stem roses lies limply on a clear glass shelf. The flowers droop over one end; the stems shoot straight down over the other. A clear bouquet wrapping hangs languidly over the front, casting a dark triangular shadow on the wall. Matthew Hilshorst’s understated acrylic sculpture, “Long Stem Roses are the way to Your Heart But,” brilliantly sets the tone for this strong group exhibition featuring work by twelve Chicago-based artists. Using painting and sculpture, they attempt to represent the concept of maintaining hope in a dark time, of foregoing isolation during the year’s darkest season.

Hilshorst’s is not the only work to incorporate signifiers of a coming spring. In the center of the room, Alex Peyton Levine’s Easter-colored “Short story, tall tale,” is suspended from the ceiling. Strands of painted popcorn, threaded on twine cut in roughly ascending lengths, hang from a bright pink wooden dowel. It’s part mobile, part beaded curtain. But my favorite detail was easy to miss: two tiny pink flowers stuck out one end of the dowel, their stems sprouted out the other end.

Flowers also show up in Alejandro Jimenez-Flores’ “(a year after) still,” a sparse work of soft pastels on raw linen. A vine’s green leaves poke into a top corner of the painting, while at the bottom, a pale rose grows between another handful of vines. The unpainted background gives the piece a muted feeling.

Cody Tumblin’s dyed-cotton painting, “Floater Inbetweener,” takes a bolder, more abstract approach to the concept of hope. The top two-thirds are a lush midnight blue, while the bottom is a much softer shade, like the blue-green of a clear tropical sea. A row of imperfect circles is sewn down the center. In place of one circle is a rectangular iPhone photo, printed on cotton. The washed-out image seems to be the sky on a summer day, with a bright sun shining through wisps of clouds. Compared to some of his earlier work, there is nothing fraught about the composition here. This painting produces an airy sense of calm; it doesn’t make one long for summer, instead it reminds you that a brighter day is inevitably ahead. 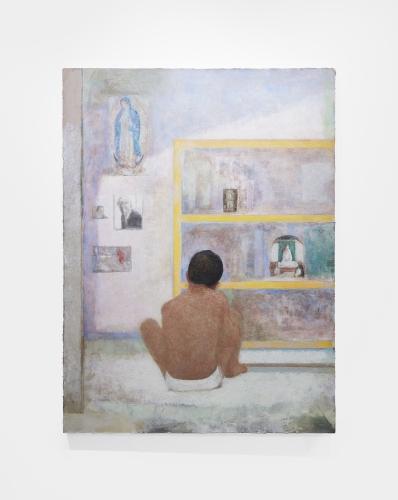 Ignacio Maria Manrique, “Felix in the Office of His Mother,” 2017, Casein and acrylic on canvas, 64 X 48 inches

Another standout is Ignacio Maria Manrique’s “Felix in the Office of his Mother,” a large-scale painting of an underwear-clad boy sitting on the floor, his back to the viewer. The room, furnished with only a bookcase, is cast in the soft, indirect light of dusk or dawn. Manrique uses small strokes of color to deftly add depth and detail. The walls are colored in tones of pink and lavender, with darker spots near the corners, perhaps to illustrate a weathered room. A print of Our Lady of Guadalupe hangs high on the wall.

Jenn Smith’s “On the Mountain” also makes use of religious iconography. In her painting, a Jesus-like figure reclines with his back against a baby-boy blue mountain. The sky is an otherworldly fuchsia. In a clever play of words, the face of the mountain is dotted with disembodied women’s faces. Jesus has his arm extended backward, covering one woman’s painted-red mouth. In this seemingly simple work, Smith hints at the ongoing horror of the moment: the ubiquity of sexual assault and the silencing of women. Here, the hope that comes through is in the number of women with their mouths open. They may be partly hidden, but they are speaking out, together, all the same. (Kerry Cardoza)