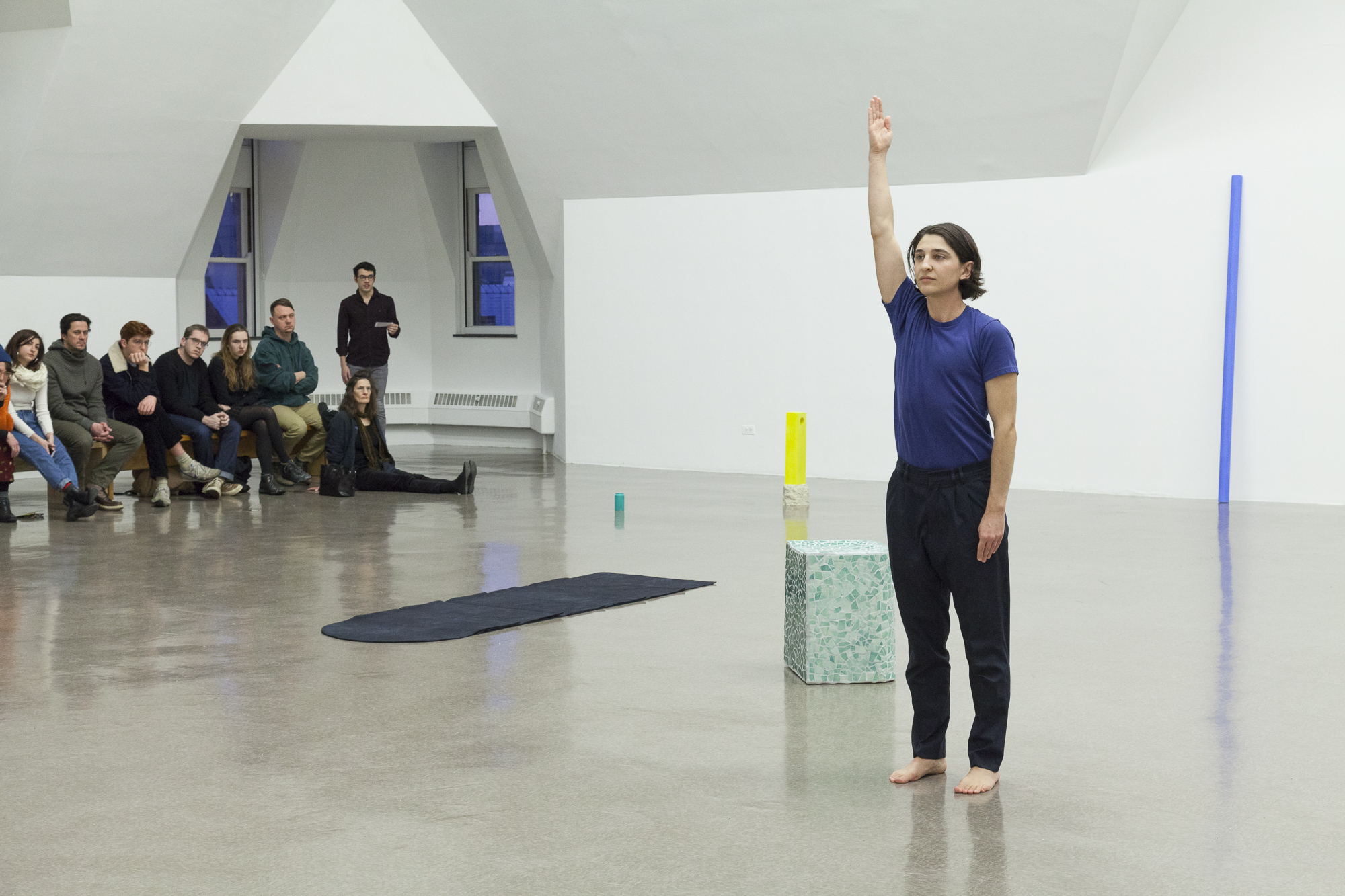 Becoming, being, and being with—this is the bodily vernacular of Gordon Hall’s installation and performance, “Brothers and Sisters,” staged at the Renaissance Society. An array of demurely-sized but colorful new objects made by Hall, as well as one collaboration with Octavius Neveaux, are arranged throughout the gallery, sitting, leaning and folded along the contours of the space. “Leaning Object (Blue),” a long, slender cerulean cylinder precariously creeps up the wall, pivoting on its slight tilt off the floor. Not far away are the deep indigo pilings of dyed cotton titled “Fold (II),” which accumulate on the floor like an evenly-paced tidal flow. Its dark pigmentation is interrupted by dusty residue or wear from prior touch; this object is meant to be used.

Hall’s work has everything to do with leveraging the nuance of relationships and physicality, begetting the viewer to find comfort in the complexities of difference. Their work investigates abstraction for its ability to depict the particularities of bodies and genders, while not negating the power of opacity in our binary-obsessed society. “Kneeling (Brick Object)” potently embodies this simultaneous reach for recognition and illegibility. Composed of brick and mortar, the small massing is carefully carved away to reveal a gentle, curving form. The typically hard-edged geometry of stacked bricks is confounded by the sculpture’s deviantly supple surface. Unexpectedly, what is known to be hard suddenly appears soft. These surprising material incongruencies continue throughout the exhibition, suggesting touch (prior or impending), weight, pairing and use.

At 5:08pm, dusk has slyly emerged and the event begins. Rather than performance, Hall names this time “in use.” The hymnal splendor of an organ echoes throughout the gallery as the audience, lined on either side to directly face each other, waits to see what this liminal moment of the day reveals. The music ends and four choral vocalists bellow out a few seconds of a single note in unison. Their voices continue their momentary eruptions throughout, scoring Hall’s movements. Hall rises out of the audience and moves to delicately lean face-first against the gallery wall, the tip of their nose flexibly accommodating the immensity of the architecture. A series of repeating, machine-like movements begin to unfold. The repetition of a cycling right arm, and then a left, rolls into the casual succession of swinging leaps across the gallery. Soon after, Hall stands with arms extended. They strangely curl their left hand and release, only to ball the right one into a tense fist. After cycling through the choreography, Hall begins again. Each run includes the surprise of a new movement or connection to a sculpture. 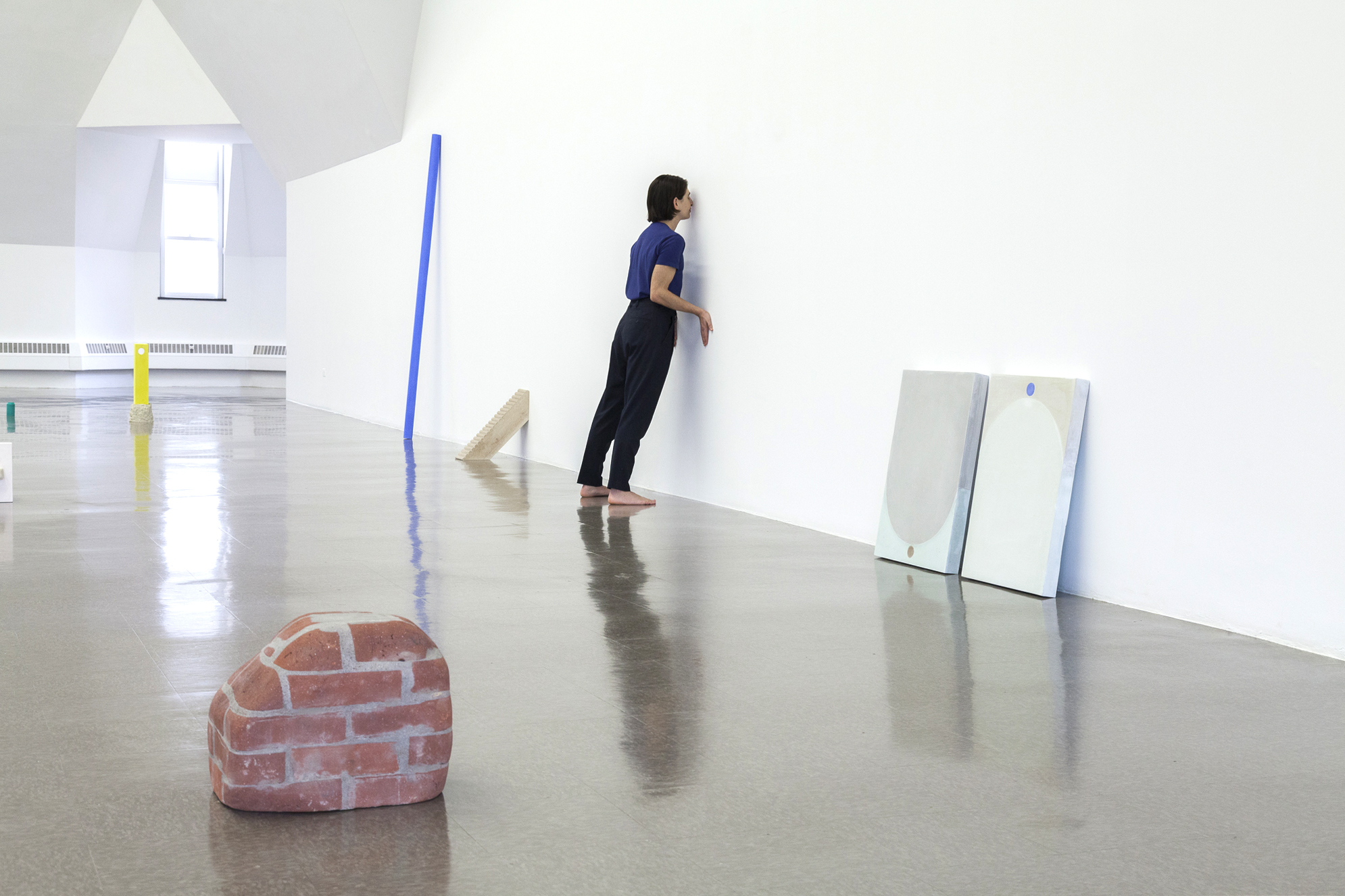 The pace of these movements vary—some are quick, others slow and subtle. They also entail various ways of applying pressure, caressing, and becoming. This choreography signifies a set of relations. This aim is perhaps most obvious in Hall’s plank-like mimicry of “Digits” or the beautiful bending of their torso into the sculpture “Seat (Yellow and Beige).” In these moments there is a glorious bodily and affective confusion that rides on relationality–does Hall want to challenge these objects, lie beside them, become them or vice versa?

Framing this affective and haptic expansion is Hall’s thoughtful conjoining of repetition and expectation. Judith Butler tells us that norms are constituted through repetition, so that normative expectations become substantiated by actual behaviors. Indeed Hall revels in the repetition of their movements, but seemingly more so in the slippages. Even more satisfying is how the audience is taken along in this relational revelry. We were left hoping that what might flow out from Hall’s soft machinic energy are new ways to use something. Especially if that something is our own body and its relations. (Jameson Paige)

Gordon Hall performed “Brothers and Sisters” at the Renaissance Society on February 3 and 4, 2018.