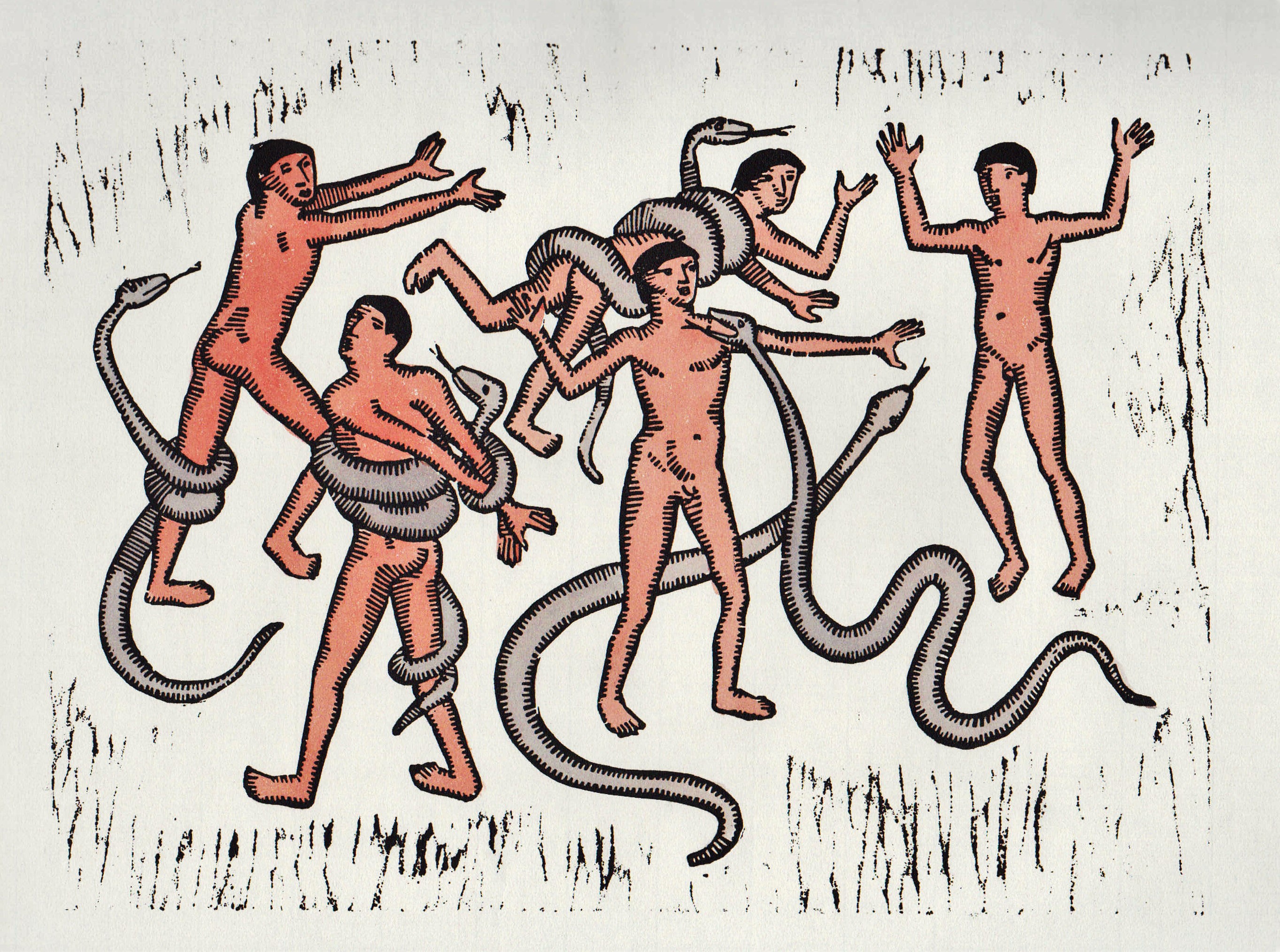 Otto Neumann (1895-1975) is not among the iconic artists who were labeled “degenerate” by Nazi officialdom, but still he has much to offer. Two of his earliest linocuts in this show, “Judas Kiss” (1919) and “Crucifixion” (1921) echo the early medieval expressionism then being revived. They feel even fresher and more dramatic than the woodcuts on similar themes made by Karl Schmidt-Rottluff. Neumann’s have a vivid sense of eruption and revelation.

In 1926, Neumann did a series of prints and drawings for each of the thirty-four cantos of Dante’s “Inferno,” the most ambitious project in this show. Neumann’s Inferno is less elegant and spacious than earlier versions done by Botticelli, Flaxman and Doré. Instead, it feels like a claustrophobic psych ward for aging criminals—welcome to the twentieth century. The damned souls are as bald, tuberous and brutish as the damaged soldiers drawn by that more celebrated degenerate, Otto Dix. Neumann’s devils are wonderfully grotesque. Curiously, his depiction of the two poets, Virgil and Dante, is hardly more appealing. Their bodies are squat and stiff while their gestures are awkward. They look more like comic actors than great poets. Hell is a bad place to be, even if you’re just visiting. It might suggest that Dante should have kept looking for another path out of those dark, ominous woods. Why didn’t he pray to a Christian saint? Gallery signage tells us that “these drawings are a chilling omen and premonition of the horrors soon to take place in Nazi death camps,” but all of the bad behavior categorized by Dante and illustrated by Neumann was by personal choice. Unlike Adolf Eichmann, none of the damned could claim they were “just following orders.” The depravity depicted by Neumann is endemic to our species. Locally, it has been depicted by the Monster Roster and the Chicago Imagists. 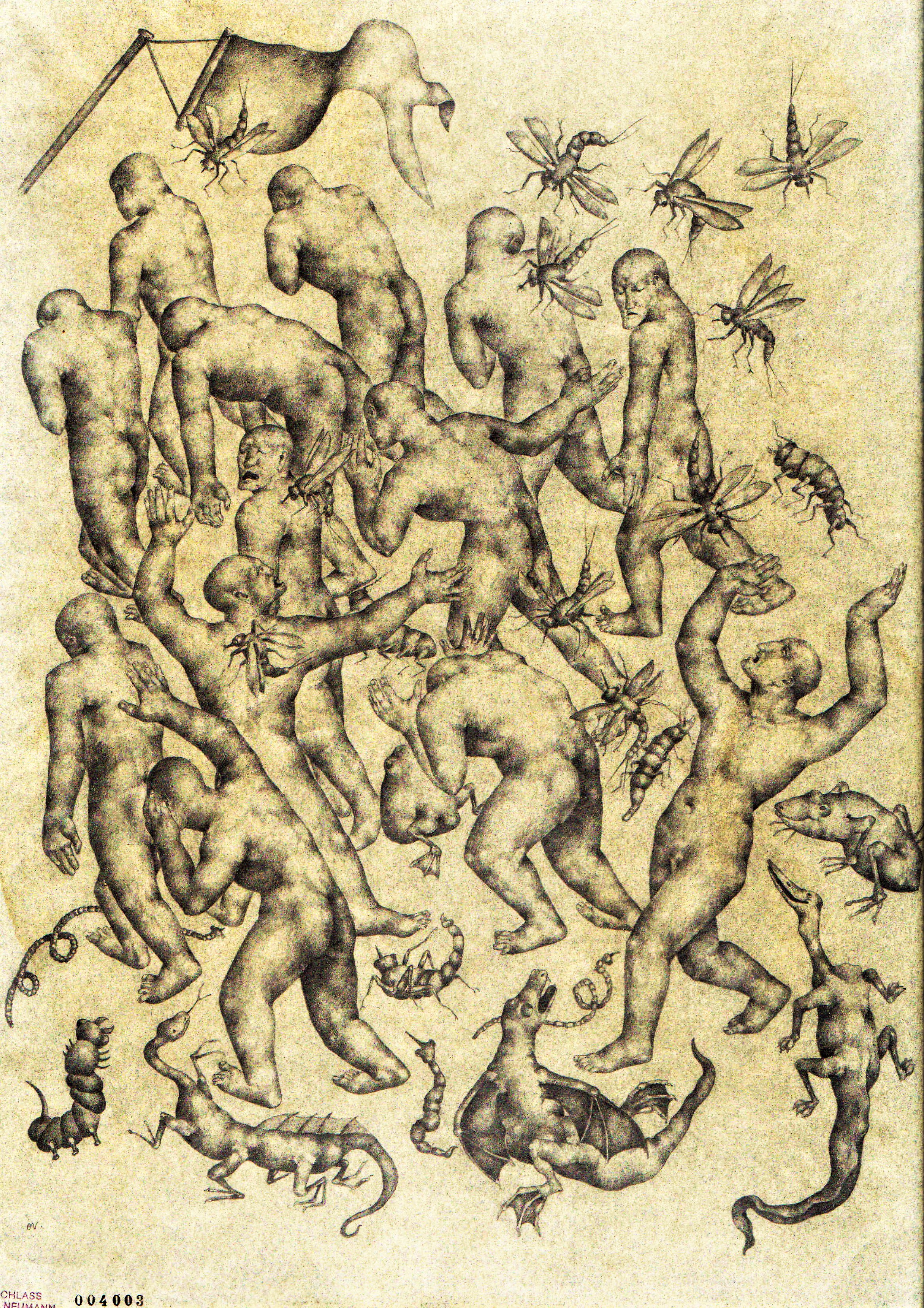 In 1933, Neumann illustrated one more horrific narrative, “Alpha and Omega,” originally written and illustrated by Edvard Munch. Neumann is less facile with pictorial space than Munch. His angular, black-on-white designs, however, have the stark simplicity and power that might also be found in Haitian hand-cut steel drums or the geometric patterns on Casas Grandes pottery. He treats the sad story of bestiality, jealousy, and murder as more of a timeless fable than a personal experience. His depiction of a fight between two ferocious bears compares well with the wild beasts depicted by Inuit printmakers.

The boldness and naturalism in the charcoal portrait of his wife, Hilde, suggests that Neumann could have made the neoclassical art preferred by the Third Reich. Instead, he spent those grim years as a medical illustrator. The example of that kind of work in this exhibit is depressing. After the war he re-emerged as a contemporary artist, illustrating classical mythology with the kind of abstracted figuration then popular in Western Europe and America. It’s pleasant and skillfully done, but nothing more.

Neumann’s early work would stand out in any group show on similar themes, but the story of his life is more about survival than spiritual growth or aesthetic triumph. Unless you were willing to work for the Nazis, 1895 was an unfortunate time for an artist to be born in Germany. (Chris Miller)