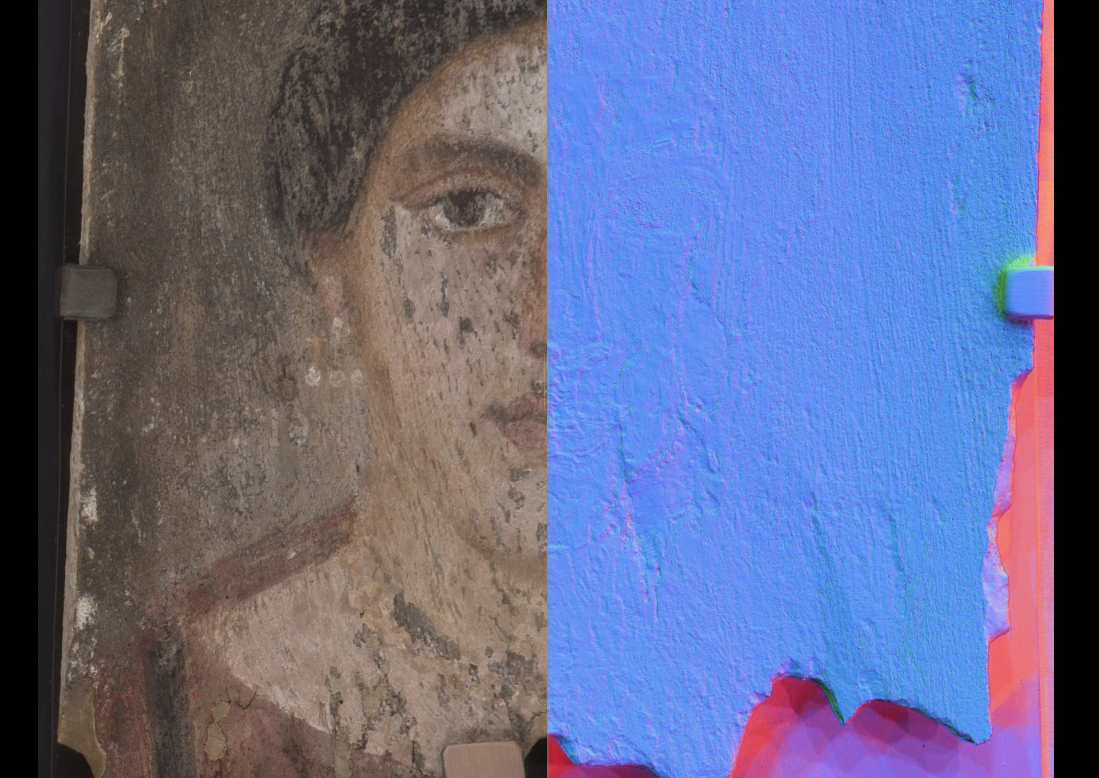 Photometric stereo surface shape visualization of mummy portrait (of a woman), wood, 31.7×23 cm, from Tebtunis, Fayum / Phoebe A. Hearst Museum of Anthropology and the Regents of the University of California and NU-ACCESS

To twentieth- and twenty-first century eyes, some remarkable portraits were painted in the Faiyum Oasis nearly two thousand years ago. About half the size of Cook County and sixty miles south of Cairo, Faiyum was an agricultural area of ancient Egypt, made especially fertile by a network of canals. During the Roman Imperial era (35 B.C.E. – 395 C.E.), the population still worshipped ancient Egyptian deities and practiced traditional mummification. But a Greek-speaking upper class had been imported during the Ptolemaic era, so the panel portraits attached to the mummies were painted in a Greek fashion. Thanks to its desert climate, about a thousand such paintings survived the intervening millennia and remain the closest thing we have to the mimetic practice mentioned by Aristotle. 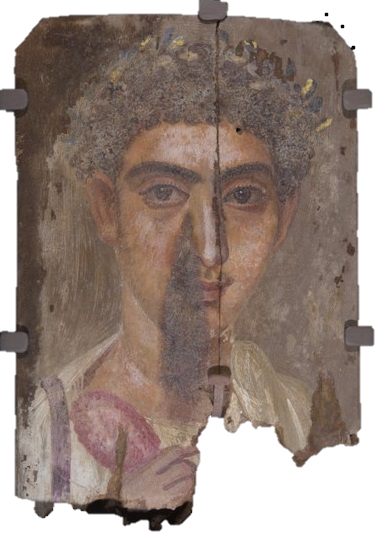 Mummy portrait (of a man with a wreath), wood, from Tebtunis, Fayum/ Phoebe A. Hearst Museum of Anthropology and the Regents of the University of California

Gallery signage tells us that an edict by the Roman Emperor Diocletian listed panel painters as among the most highly-paid craftsmen in the empire, and it’s not hard to see why. For dramatic effect, the subject looks straight into the eyes of the viewer, but in contrast to naïve portraiture, the face is turned just a few degrees to one side. That turn reveals the volumes of the lips, eyes and brow. Looking closely, you may notice, for example, how the far eye has been skillfully drawn differently from the eye that is nearer. Despite the differences in age, gender and proportion, each volumetric face seems to be saying “Here I am.” Fear, anger, determination, sensuality, humor, strength, weakness—none of that is expressed. It’s as if you had just been introduced by friends and were looking someone straight in the eye for the first time. The wooden panels are often cracked and the surfaces weathered, but that only enhances the effect; a gentle personality from two-thousand years ago shines through the intervening ages.

“Scholars have long debated whether or not these paintings are actual renditions of particular individuals,” says the gallery didactics. Possibly each painting began as a generic depiction of a person entering eternity, and after consultation with relatives, the nose was lengthened, the chin made smaller, etc., as a police sketch artist might do. Contemporary people certainly enjoy seeing them up on the wall. They seem to affirm our mutual identity as humans, rather than as any specific nationality or ethnicity. However, this exhibition also has an example of the context in which the panels were originally installed: they were affixed to the head within the wrappings of a mummified corpse. 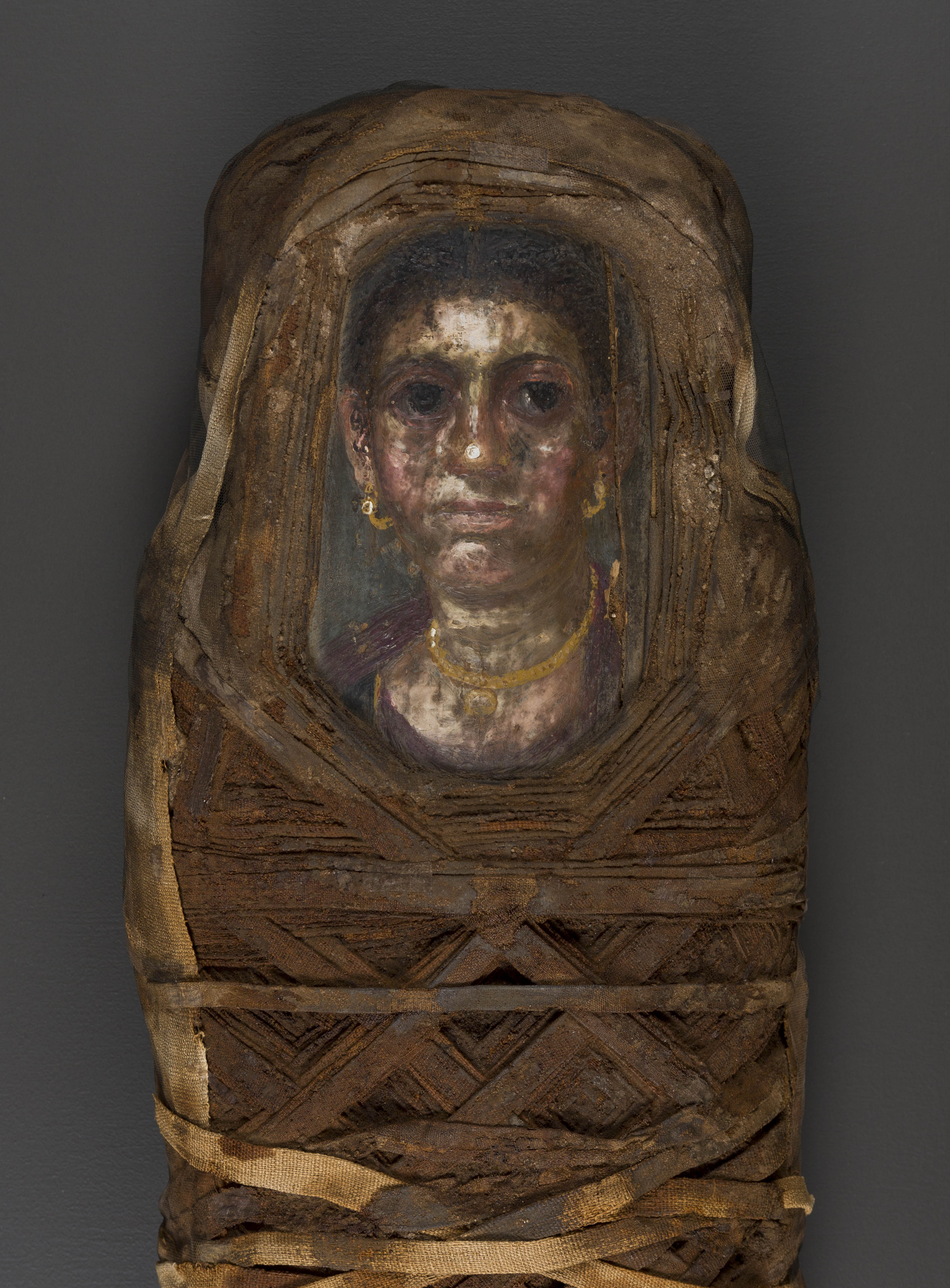 As a bonus, there are also two well-restored sculptural funerary masks with that same wide-eyed stare and youthful charm. As a whole, however, this exhibition is less about showing art and more about establishing the historical context of both its creation and rediscovery. There is plenty of gallery signage but only seven painted portraits, only two of which really need to be seen in person. An online exhibition could have been just as instructional as well as being far more widely accessible. (Chris Miller)

“Paint the Eyes Softer: Mummy Portraits from Roman Egypt” is on view through April 22 at the Block Museum of Art, 40 Arts Circle Drive, Evanston.