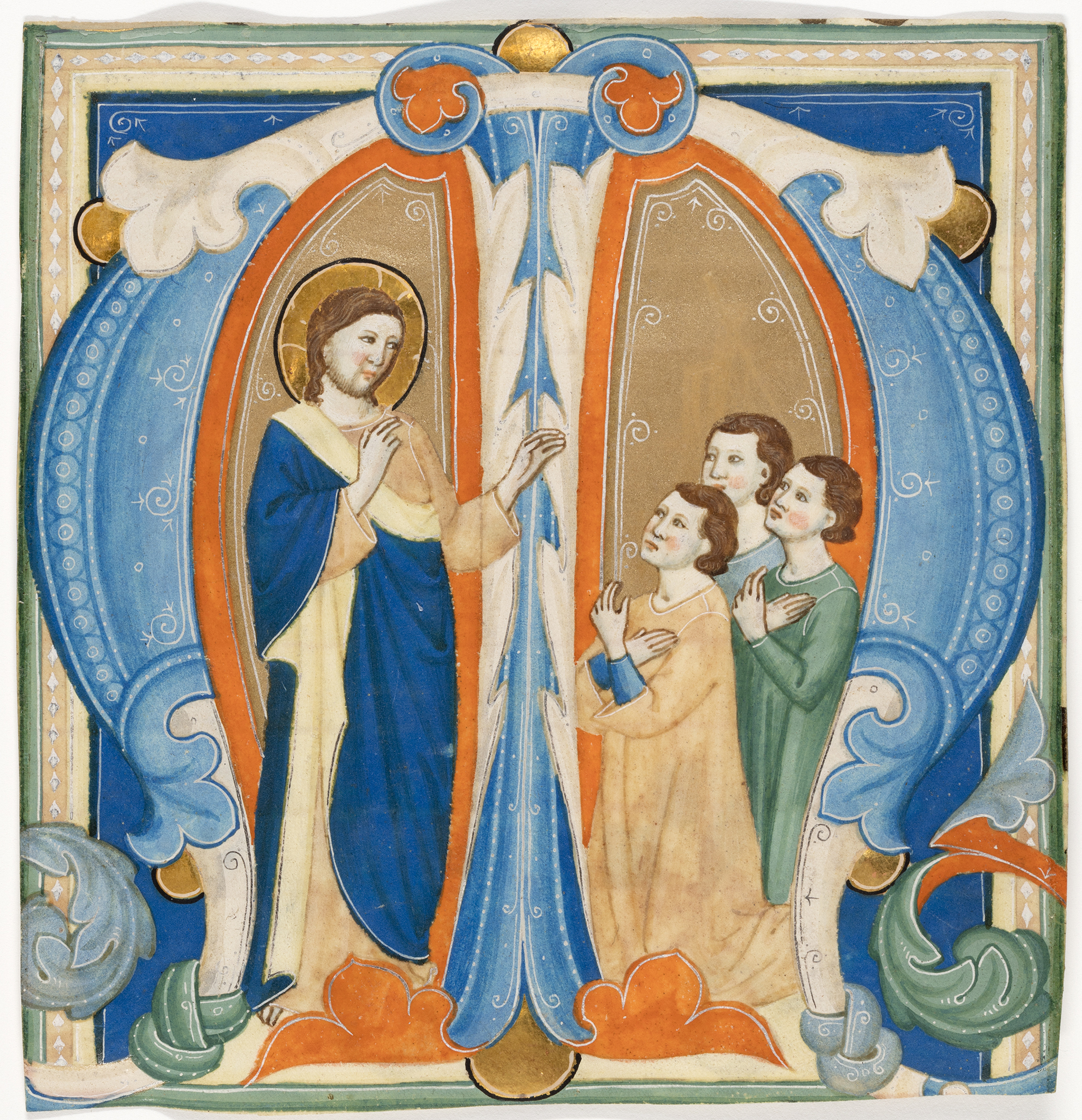 A small, exquisitely rendered painting from southwest Germany depicts a lithe, bearded God holding a crucifixion before himself. Little daubs of red on Christ’s hands, feet and side signify the violence by which humanity’s salvation was accomplished, but the tiny precision of the wounds, of a piece with the delicate shading and linework of God’s robes, suggests that the artist aimed just as much at making a wondrous scene of minuscule detail as conveying any theological niceties. Their effort would probably not have gone unremarked. Medieval commentators like Gerald of Wales noted the compelling power of illuminated manuscripts that seemed too complex, too brilliant to have been made by human hands. And indeed, this small painting could stand for a theological proposition of sorts. Not only did the Bible describe humans as being made, a little like artworks, in God’s image (Genesis 1:26), but Christ was understood as the paradigmatic form of incarnation and, correspondingly, could be cast as the perfect work of art. Laboriously made miniatures, like the initial which was originally made for a Bavarian Gradual (a special kind of religious book that collected musical materials for the Mass), served doubly as a form of devotion. The extraordinary skill and expensive material that went into them—the Holy Spirit is painted in liquid gold and the whole scene is backed by burnished gold—exemplified a deep investment in the sacred, even on the part of lay artists, and the artful presentation of such a holy scene was also intended to afford the attentive viewer an opportunity to reflect on mysteries of Christian salvation. The fact that the whole scene was subordinated to the demands of a larger text—note how the crossbeam forms the central stroke of the letter “B”—and that we behold an illustrated interruption of musical registers rather than an autonomous artwork is typical of manuscript painting in the high Middle Ages. We are not yet in the world of “l’art pour l’art,” and all of the manuscript cuttings in this small exhibition originally appeared in devotional texts of one sort or another. 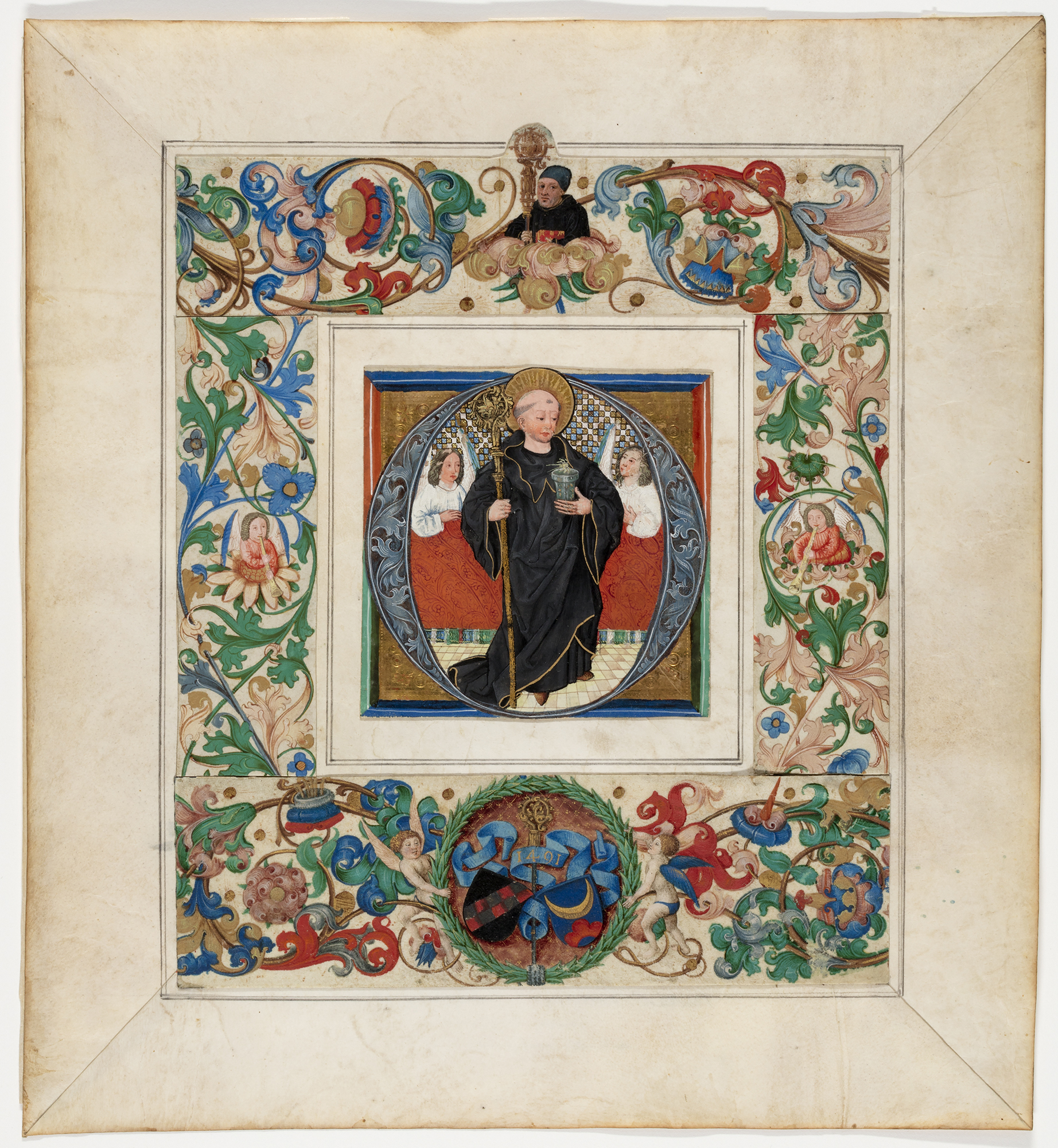 Largely comprised of fragments from the collection of Sandra Hindman, professor emerita at Northwestern and now a prominent dealer in medieval art, this show demonstrates just how many gems of medieval illumination remain in private collections or on the market. Especially noteworthy are two narratological images painted by the so-called Master of the Suffrages, each sewn into embroidered frames, which represent rare instances of what once must have been a much more common devotional trend. Only five other such objects are known to scholars; only one of those five remains in a private collection. This statistic has caused me some concern and I agreed to write this review with trepidation, for I am strongly opposed, on principle, to all trade in pre-modern art and to the private collection of such significant historical objects. Moreover, my friends and colleagues have worked with Professor Hindman, my own scholarship depends on keeping a good relationship with the Art Institute, and despite my qualms, I rely on the good graces of private collectors to carry out my research. Honest criticism does not always a smooth scholarly career make. 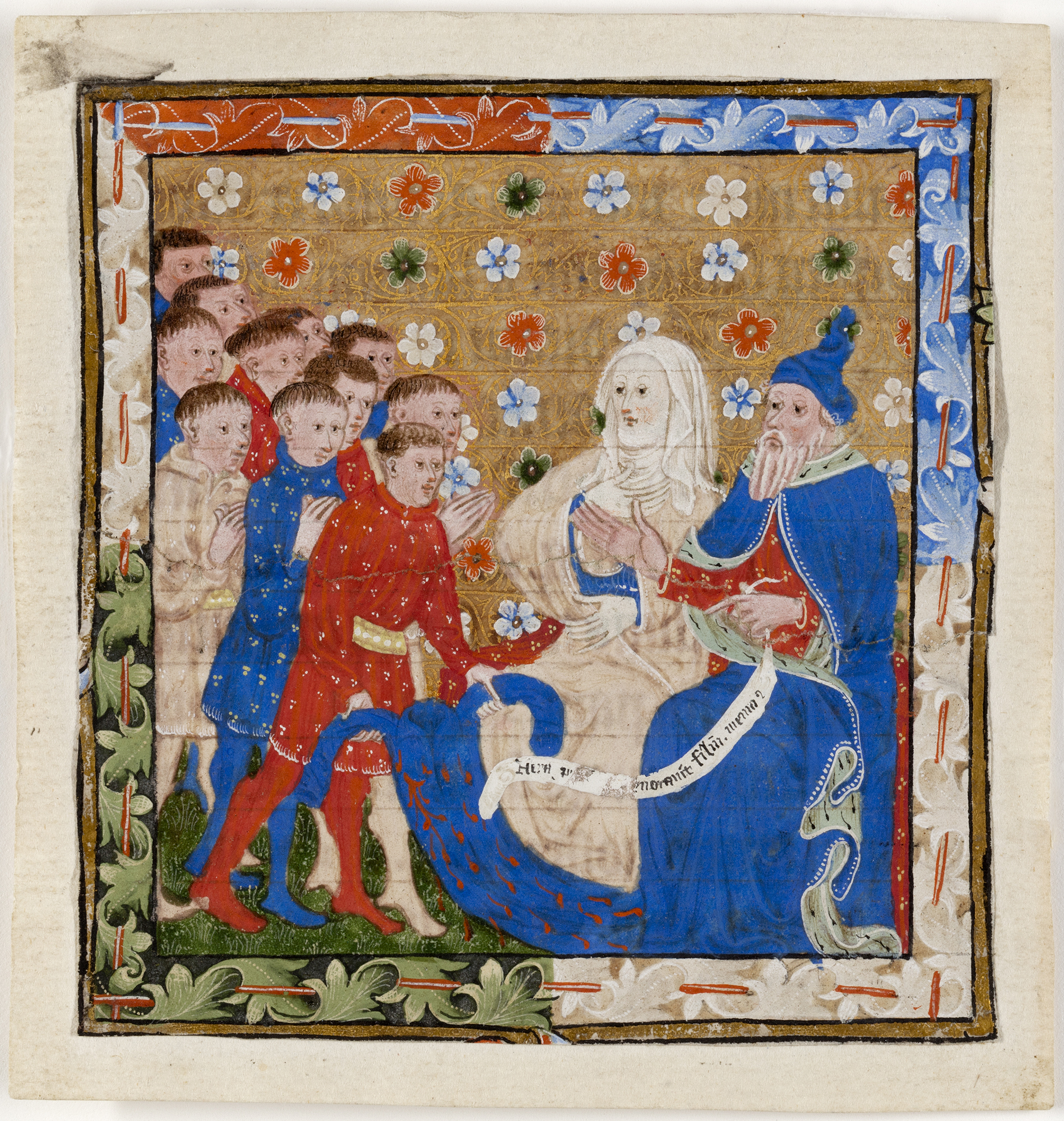 English Painter (Master of the Lydgate Troybook), “Rachel and Jacob lamenting Joseph, from a Book of Hours,” 1420/30, Gift of Sandra Hindman

But Sandra Hindman has been, by all accounts, a responsible dealer over the years, helping institutions to reunite manuscripts fragmented by the market where unscrupulous dealers have tended to break those objects up. Some of the illuminations on display have been promised to the Art Institute as gifts, and so this exhibition is a first chance to inspect works that will enter a responsible public collection. While I remain skeptical of institutions that exhibit private collections—visitors can wander over to the “New Contemporary” galleries to marvel at the mixed blessing of the Edlis|Neeson gift—the show has been judiciously fleshed out with rarely displayed objects from the museum’s collection. It’s worth coming just to see a fantastic twelfth-century leaf from Weingarten that depicts the Mass of Saint Gregory. The curators have studded the show with Easter eggs, displaying a rare illumination by Giovanni di Paolo by the room’s door and re-hanging six of the same artist’s panels by the doorway of the neighboring gallery, and a large, handsome catalogue by leading manuscript expert Christopher de Hamel accompanies the exhibition with a detailed checklist by—full disclosure: my friend and colleague—Matthew Westerby, far beyond the standard investment for an Art Institute show of this size. Qualms aside, then, a smartly hung show of medieval paintings in Chicago is something to celebrate. (Luke A. Fidler)

“The Medieval World at Our Fingertips: Manuscript Illuminations from the Collection of Sandra Hindman” shows through May 28 at the Art Institute of Chicago, 111 South Michigan.