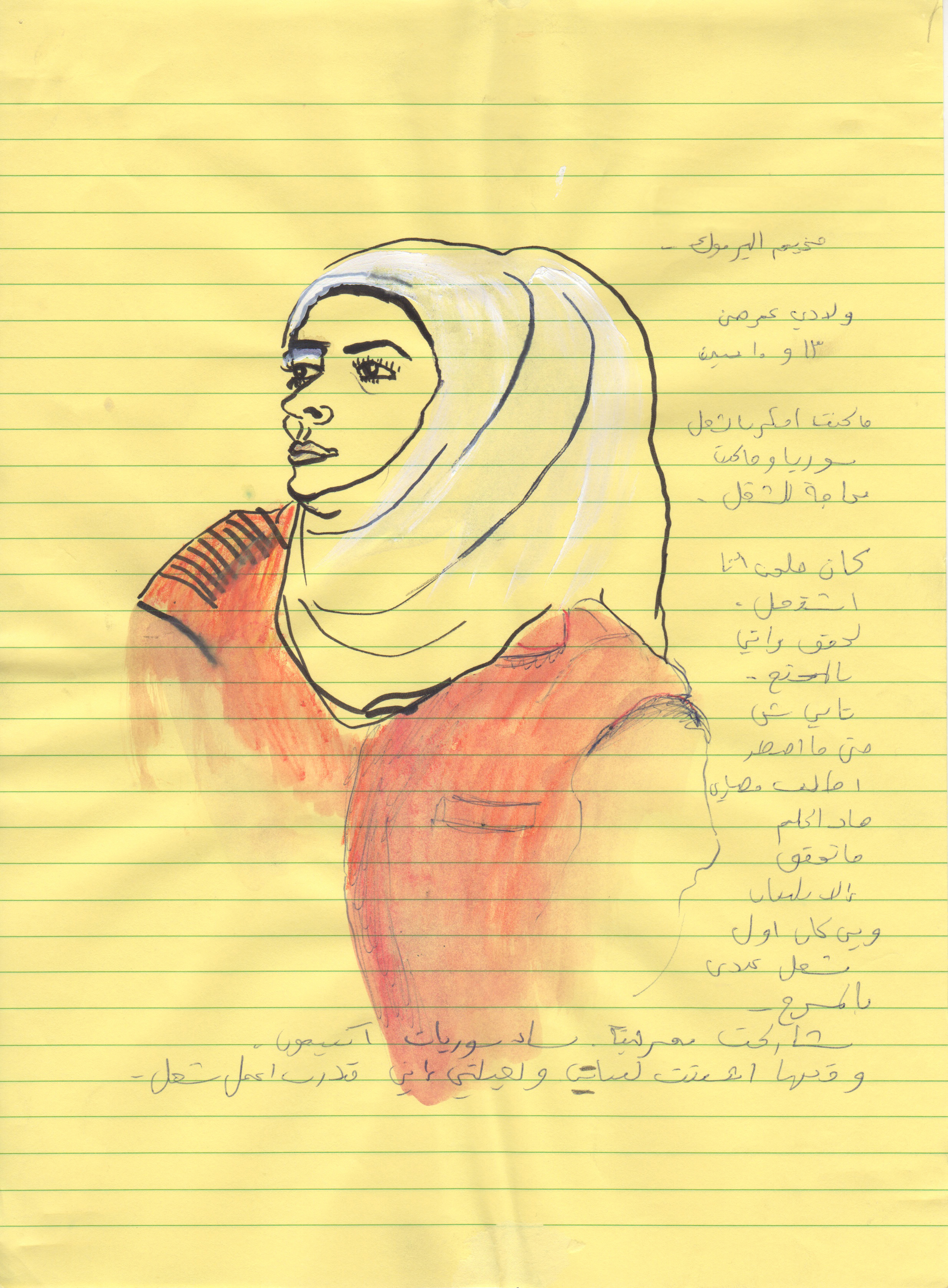 Two summers ago, I wrote a love letter to Chicago from Beirut, where I had chosen to spend the hottest months of the year working alongside Lebanese colleagues at the Beirut Art Center, a small-but-mighty Kunsthalle in a city that was once called the “Paris of the Middle East” for its lively culture and Western-friendly disposition. That description, still trotted out by well-meaning people who surely could not find Lebanon on a map, always makes me wince. The truth is that Beirut is a beautiful city, full of art and music, drinking and dancing, and some of the most progressive people and contradictory social conditions I have ever experienced. It’s not the Paris of the Middle East, it is the Beirut of the Middle East, and if you don’t know what that means I encourage you to book your ticket right away.

It’s nearly impossible to discuss Beirut without also talking about the war, the civil war that lasted from 1975 to 1990 and saw aftershocks in 2006, when Israel shelled downtown Beirut from naval ships off the Mediterranean coast and a series of pro-Syria assassinations culminated in the Lebanese finally expelling Syrian forces that had lingered since the official end of armed hostilities. Most Lebanese, especially the younger generations, don’t want to talk about the war, not only because it is painful, but because it overshadows everything that has happened there since—the delicate political truce that has lasted for decades, the rebuilding of the war-torn city, the galleries and museums that have flourished, and the nightlife that rivals the likes of São Paulo and Berlin. 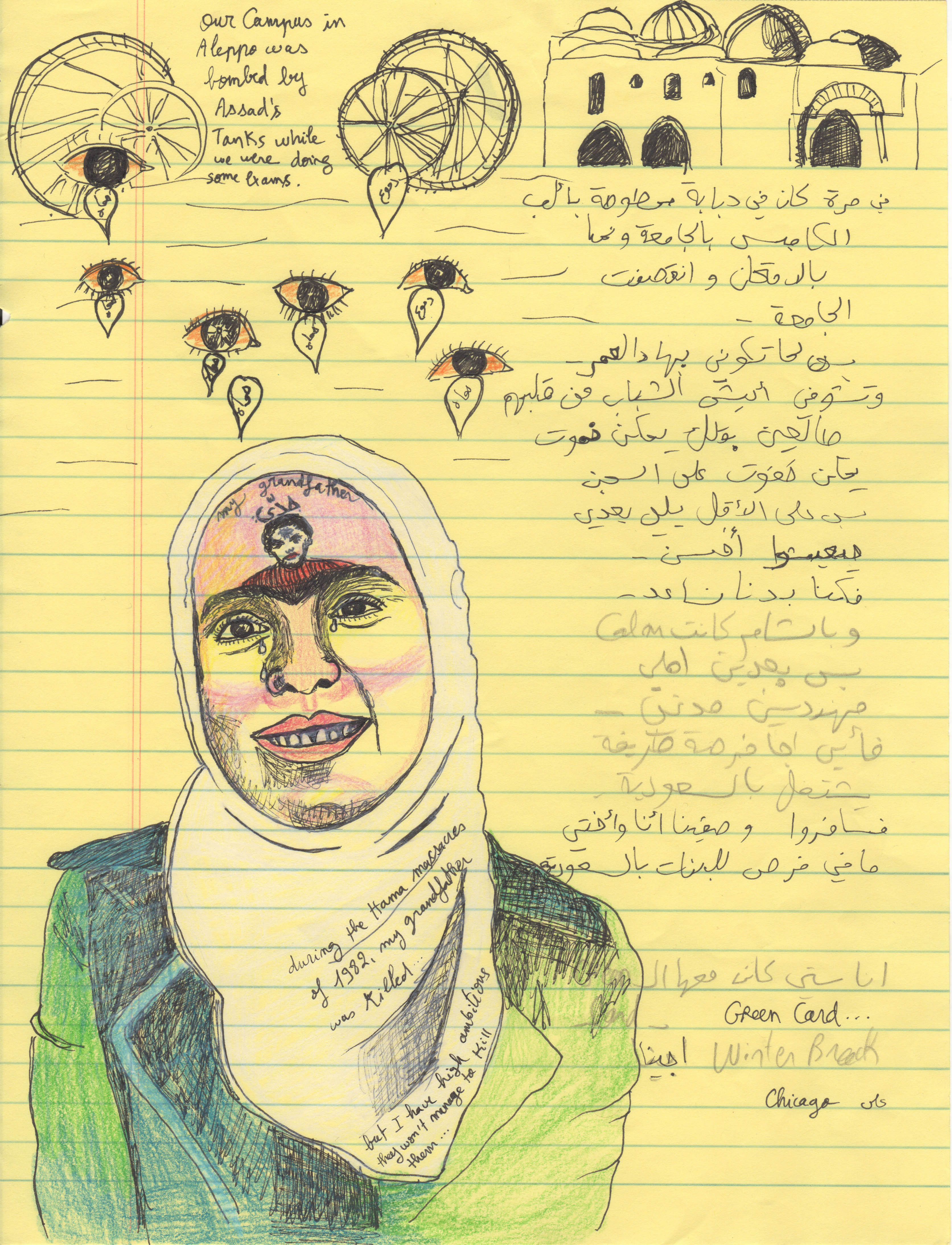 Mounira Al Solh is among that generation that grew up during the Lebanese Civil War, born of a Lebanese father and a Syrian mother. To escape the chaos and violence, her family briefly relocated to Damascus in the 1980s. For reasons too complex to unravel here, Syria and Lebanon have shared a fraught and intertwined history since before their centuries under Ottoman rule and more recently under French mandate. Both achieved national sovereignty in the mid-forties, not long before the establishment of Israel and the Palestinian Nakba. Before then, Lebanese Christians succeeded in excluding Lebanon from the formation of a greater Arab state which was supported by Muslim Syrians who sought to enfold Lebanon within it. Damascus is two hours by car from Beirut, closer than the trip to your parents in the suburbs. During the civil war, many fled to Syria for safety, Al Solh and her family among them.

With the United States, Russia, Turkey and Iran entrenched in the fray with the Syrian regime, the Kurdish resistance, the Free Syrian Army, the Islamic State, Hezbollah and other militias fighting on all sides, it is hardly a “civil war” that we are seeing in Syria today. However, the Lebanese Civil War also saw intervention from some of the same players, including the United States and Iran, as well as Israel, France, Syria and the omnipresent Hezbollah. In a cruel and ironic inversion of the Lebanese war years, millions of Syrians have fled over the border to Lebanon, where they have stayed as migrants or left to seek refugee status in Europe and the United States. 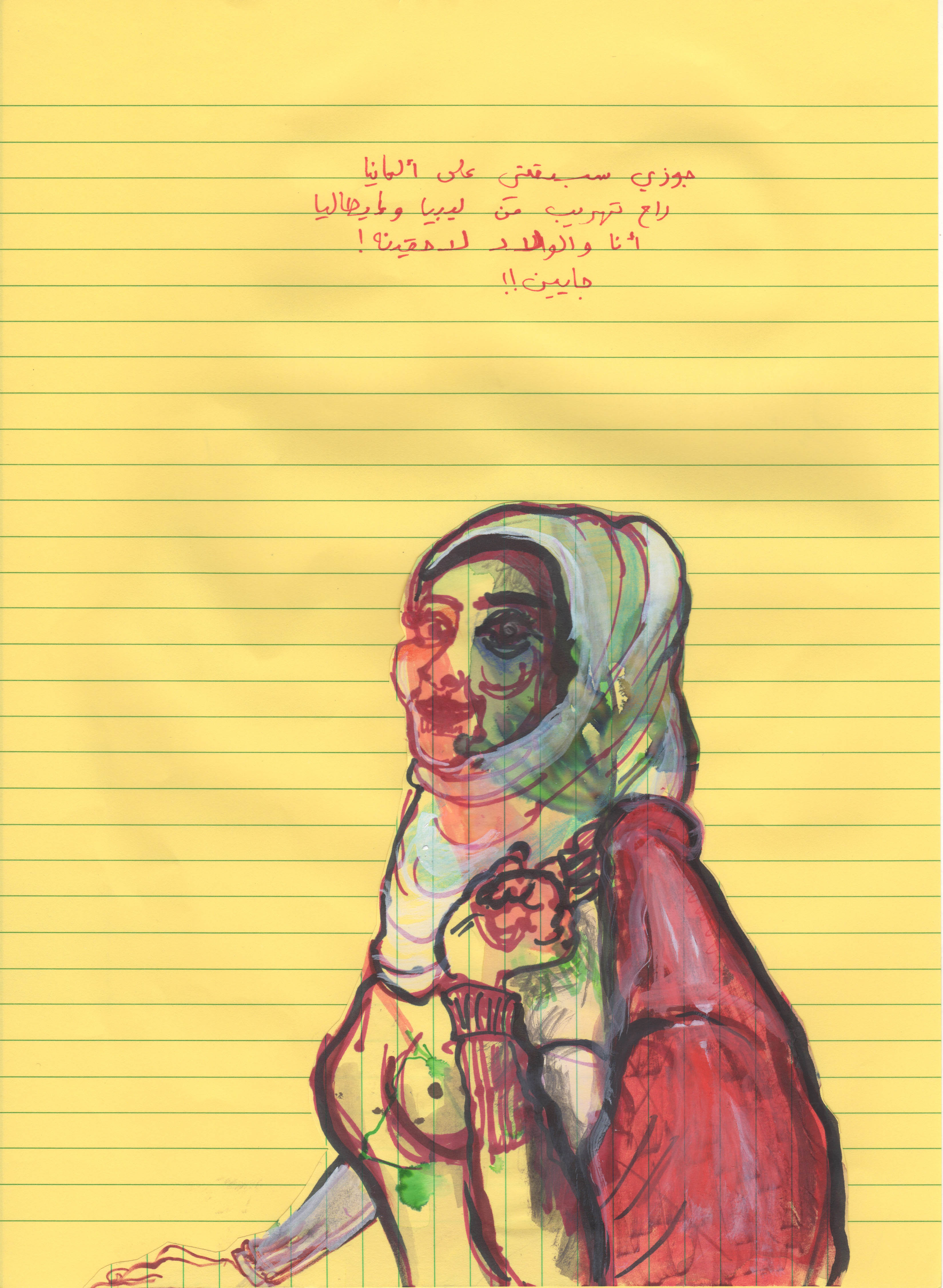 Mounira Al Solh was living in Beirut in 2012 when Syrians began to appear in Lebanon. They were not refugees as we tend to stereotype them—desperate, penniless, and trembling—because these early migrants had the resources to leave home and sustain themselves without the authorization to work. Among them were leftist artists and intellectuals who hoped that the Arab Spring would point the way to a progressive resolution of the brutal decades of the Assad regime. As Al Solh tells it, the Beirut nightlife in her neighborhood became a site of excitement and cultural exchange. “It was an amazing time. When you went out at night, you’d end up going crazy, getting drunk, dancing on the tables with Syrians, Iraqis, Palestinians, Lebanese. It was so full of life, yet at the same time still problematic.” Al Solh, who lives in a traditionally Christian neighborhood where she is not originally from, does not put her full name on her apartment door lest she alert her neighbors of her otherness. Wartime sentiments linger in Beirut and the return of Syrians is a chilling reminder of the recent past, despite that this time they are fleeing from war, not waging it. Since the outbreak of the war and the migrant crisis, Syrians in Lebanon have been subject to rampant racism from Muslims and Christians alike.

One at a time, Al Solh began inviting Syrians into her studio in Beirut, asking them to share their stories, their dreams, their feelings about the war or whatever else was on their minds. As she listened, she sketched their portraits on yellow legal pads and took notes in the form of brief quotations, almost always in the dialect of Arabic shared by Lebanese and Syrians. At first, it was a way for her to meditate on what might otherwise be an unfathomably abstract condition, one that she knew all too well from growing up in Lebanon. According to Hendrik Folkerts, the Art Institute’s new curator of Modern and Contemporary Art, “It was also a way for her to tap into her own memories of being in Syria during the Lebanese Civil War.” Folkerts, who worked with Al Solh on her presentation of these drawings last summer at Documenta 14 in Kassel, says 2015 was a turning point both in the regional politics and in the project. That year, Lebanon introduced visa restrictions on Syrians, slowing the tide of migrants and driving many of them to the shores of the Mediterranean where they undertook risky sea crossings to Europe. Those who survived the journey found fenced-off borders in Eastern Europe and temporary camps on airstrips and abandoned prisons in Greece, the Netherlands and elsewhere. That year, Al Solh began meeting and drawing people in other parts of the Middle East and Europe—Turkey, Italy, Greece—and even re-encountering those she had met elsewhere, like a young man she knew in Beirut who ended up in a refugee camp in Norway by way of Russia. 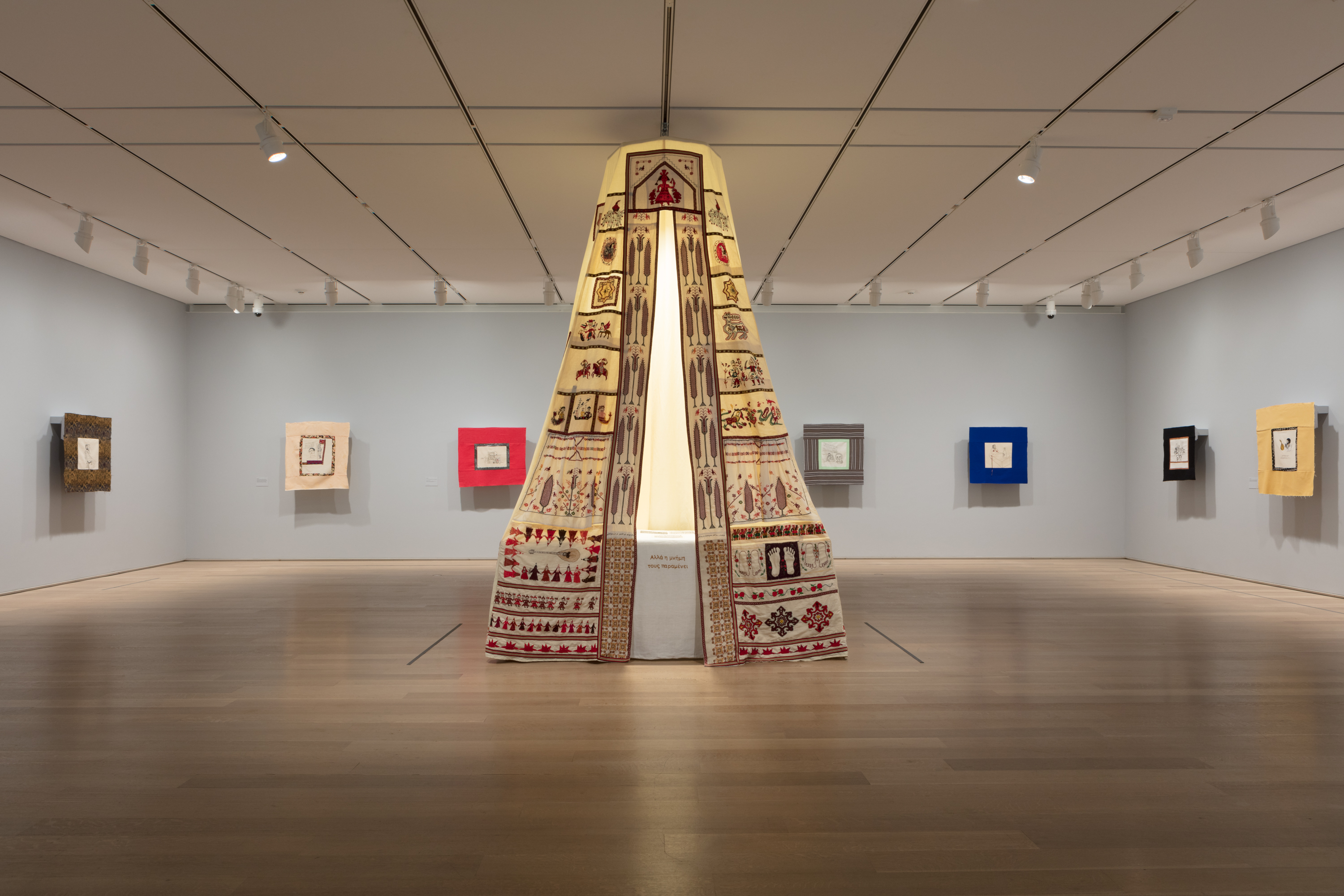 Mounira Al Solh, Installation view of “I strongly believe in our right to be frivolous” at the Art Institute of Chicago, Winter 2018

At the Art Institute, hundreds of her drawings are arrayed in a dark gray gallery on the first floor of the Modern Wing. From afar, they appear more like a serial work of conceptual or minimalist tendencies. Up close, each sheet presents a loose portrait surrounded by Arabic scrawls—pen, pencil and marker co-mingle on the page. Like the subjects themselves, the styles vary widely. It is as if many artists contributed to the project, a sensation that belies the obviously intimate nature of each drawing. In fact, the fruits of collective labor are exhibited in the adjacent room, where a much smaller series of embroideries are hung on the walls. Based on the drawing sessions, Al Solh enlisted women to assist her in embroidering portraits and text that overlay her sketched impressions with dreamier scenarios of loss and redemption. In the middle of this gallery, a strange tent-like structure is suspended from the ceiling. On it are embroidered designs that appear to be traditional motifs—figurative Ottoman processions, cypress trees, Palestinian tatreez, mermaids and peacocks. With help from more than thirty Syrian women, the artist embroidered a sperveri, a traditional wedding bed canopy from the island of Rhodes, which is Greek by contemporary designation but much closer to Turkey than to the Grecian mainland. Greece, like Lebanon and Syria, existed for centuries under Ottoman rule that caused traditions and culture to intermingle throughout the empire. In an inversion befitting the tragic ironies of Syria and Lebanon, Al Solh’s “Sperveri” is meant not as a bed for consummation, but as a memorial for those who have died since the outbreak of the war, many whom drowned in the sea between Lebanon and Greece. 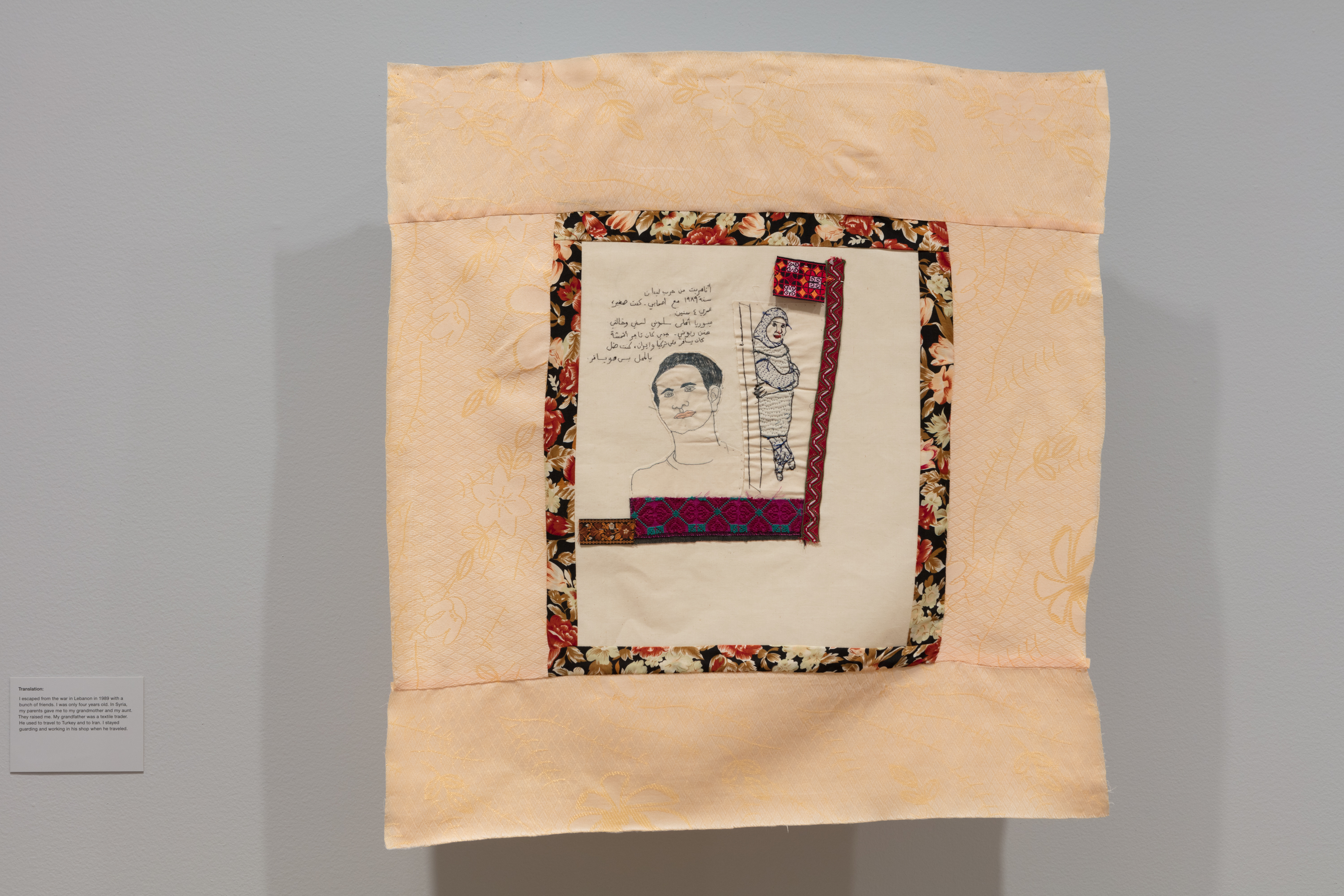 Mounira Al Solh, “My speciality was to make a peasants’ haircut, but they obliged me work till midnight often,” 2015-2017. /Art Institute of Chicago.

Two summers ago from Beirut, I wrote that “resistance is more often a practice of preserving the palimpsest than a will to wipe it clean.” Looking at Mounira Al Solh’s work in Chicago, where she has added new drawings of migrants she has met here through the Syrian Community Network, I feel compelled to revise that statement. Indeed, if we don’t want to repeat the tragedies of history we must remember them, but if we want to make a better future, we must first imagine what it will look like. We must draw it, embroider it, paint it, and sculpt it together—we must dream it and create it before it will be.