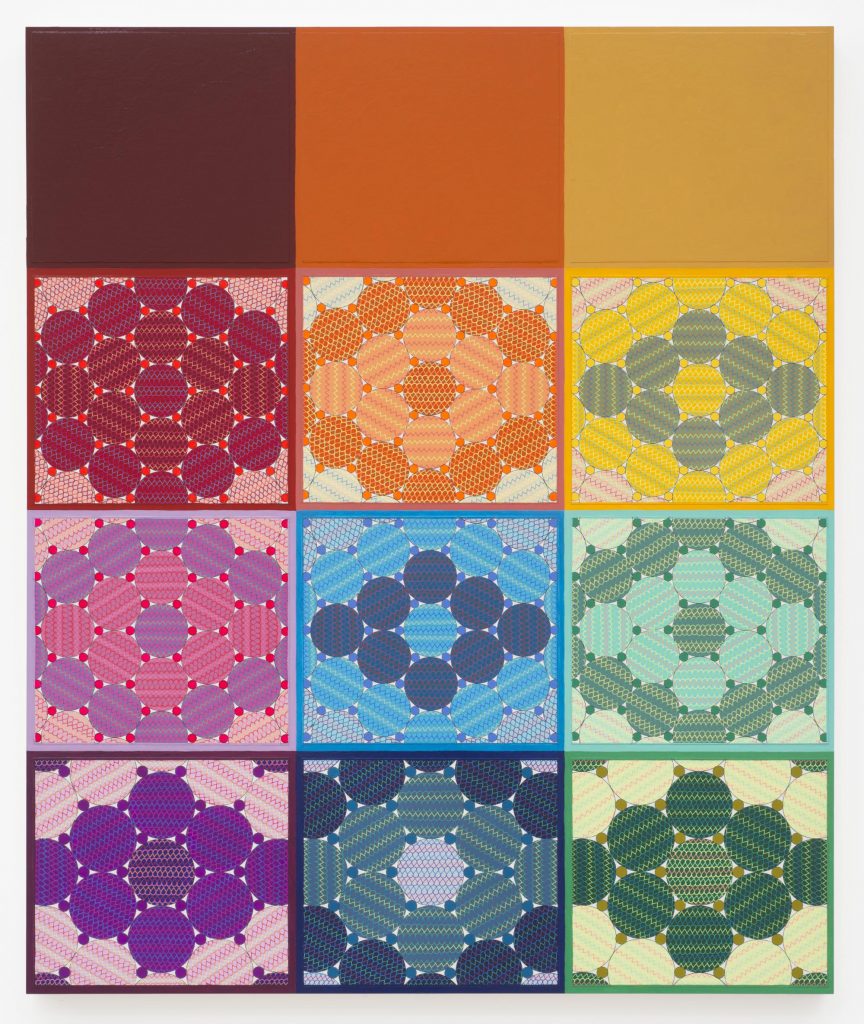 Geoffrey Todd Smith’s “Field Streaming” is roughly divided into two bodies of work. The front gallery primarily consists of a collection of collections. The installation activates the relationship between panels through similarities in color palette or by pairing color complements next to each other. 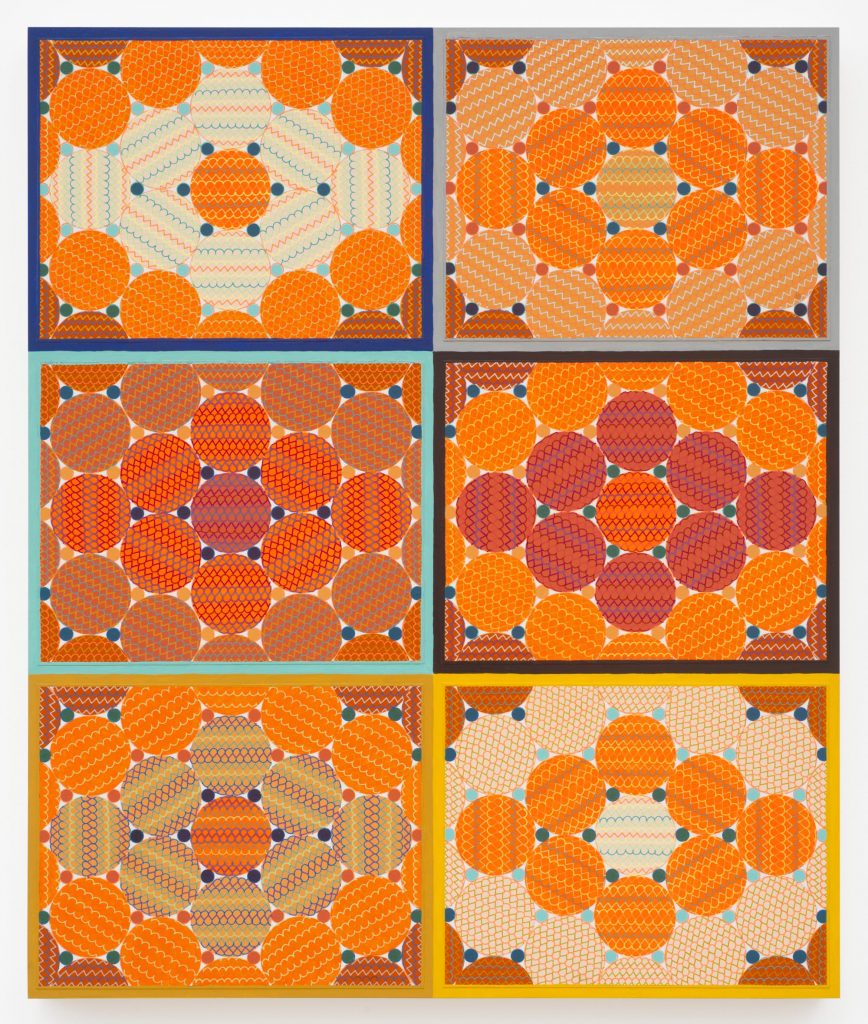 The quiet-loud intensity of Smith’s visual stimuli discourages the impulse to scan. Rather, we are invited to slow down, approach the work and investigate from an intimate range. Each modestly scaled work is a vertical grid of six to twelve small gouache and gel-pen works on paper adhered to a panel. The patterned grids are both singular and collective, with centripetal and centrifugal dynamics between each section and the whole. As one approaches each work, the variety of perceptual variables within the formal constraints becomes apparent as the image shifts, depending on pattern combinations, color choice and proximity. The zigzag gel pen patterns flex optically, folding inward at certain distances while bulging out at others. Analogous color palettes of Ben-Day dots are consistently different, directing and redirecting one’s attention as the patterns connect and disconnect within the rectangular, hand-painted enamel frame edges that further subdivide the image within itself. “Marmalade Promenade” bows forward and back with variations of orange kaleidoscopes. “Love in a Lunar Lander” has a spectral color pattern that directs your eye around the edge of the panel, only to abruptly break the orbit with a shift to an all-black-dot pattern. “Chaste Waterfall’ absolutely vibrates with a saturated range of middle-tone pinks and reds, while “Astral Glide (2.0)” collects the color themes of other paintings, acting as a kind of synopsis. 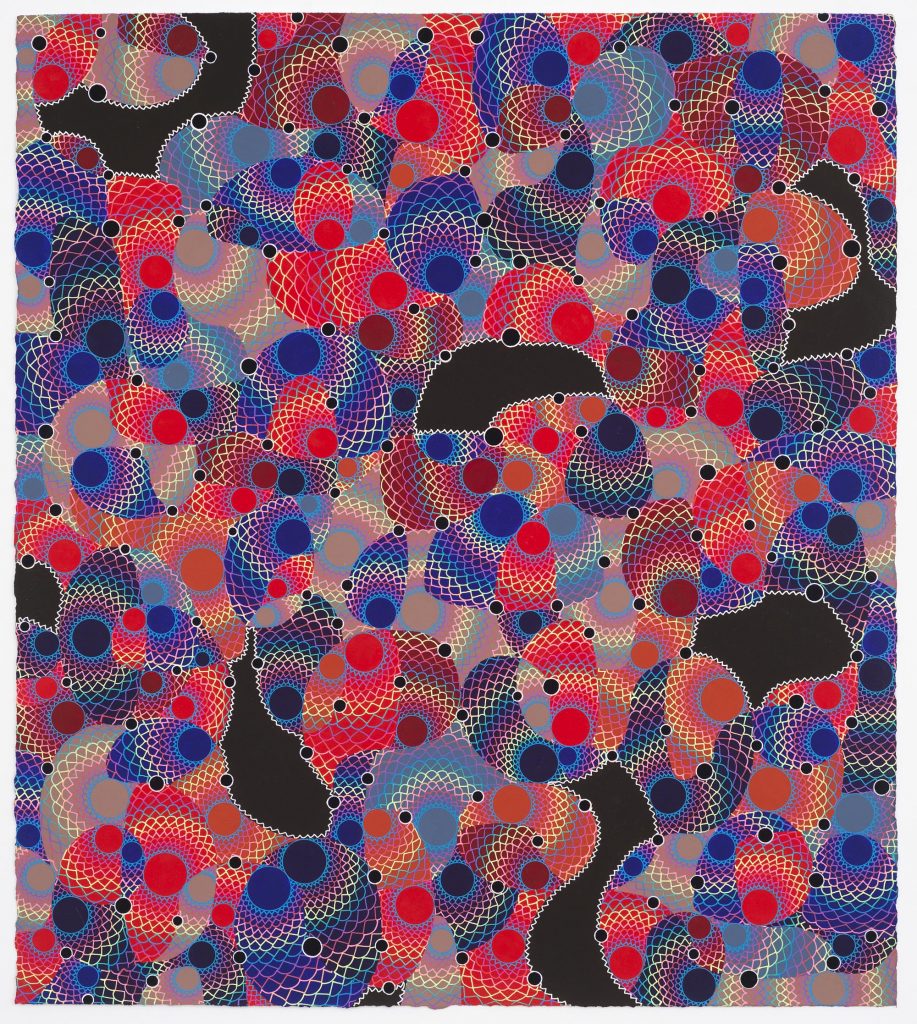 While there are consistencies in process and approach, the gouache-and-ink work on paper in the back gallery has a fundamentally different figure-ground relationship. Biomorphic forms ooze like lava lamp wax, curving and turning into pattern-on-pattern fields. The figures, such as they are, swell volumetrically with the detailed contour of Smith’s fish-scale line work while the shapes of the negative space are flat, silent by comparison. Small dots are scattered throughout the pictures, though they are mostly placed onto the figurative forms. But like the collections, context determines visual effect. In “Cannibalistic Mystic,” the black dots in the central shapes match the negative space, visually poking holes while the red dots adorn and amplify the green shapes along the frame edge. In “Lucy in the Sky with Demons,” red and blue dots oscillate in fields of radiating local color, producing psychedelic oscillation befitting the title’s snarky nod to the counterculture’s visual vocabulary.

Throughout “Field Streaming” is a consistently thoughtful balance between color theme specificity and syntactic improvisation. This gives the installation a formal coherency while developing a keen sense of individuality between works. But there is no adequate way to encapsulate the show as a whole. Rather, it is the intimate and self-reflexive context of each work that generates the pleasure of viewing the show and Smith’s precise, thoughtful presence. (Andrew Falkowski)