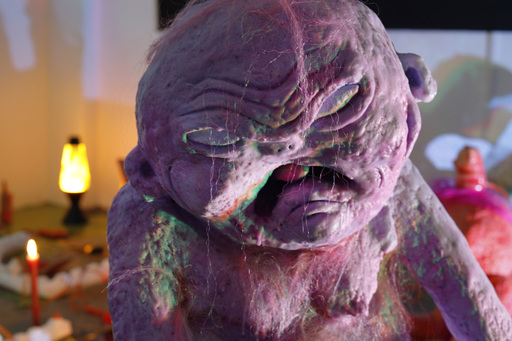 Molly Colleen O’Connell, Installation view of “Why Do Spiders Drink From My Mouth While I’m Sleeping?” at Julius Caesar, Spring 2018

At a time when facts are in question and “fake news” floods the airwaves, Molly Colleen O’Connell’s exhibition at Julius Caesar provides us respite from reality. In an ambitious effort to question post-truth politics, the artist transforms the gallery space into a mind-bending troll grotto, replete with lava lamps, glitter vinyl and a demented disco ball. In time, one begins to read the reference points laid out by O’Connell, urging us to explore how inclination toward anonymity and the embrace of online avatars in the early days of the internet have inadvertently shaped the deceits of contemporary political rhetoric. Here, hostile government agents propagating false news could well be the relative of Guccifer 2.0.

For a society collectively licking its wounds from the wave of fake news surrounding the 2016 United States presidential election, anonymity and crafty storytelling are no stranger. O’Connell embodies the figure of a troll cult leader in a video titled “Troll Meeting” that opens the exhibit, a re-creation of a live performance of the same name from this past January at the Museum of Contemporary Art. The onscreen troll warns followers of truths and fables equivocally, weaving a narrative that points to facts (indications of the CIA spying on American civilians online) and a twisted version of historic conspiracy fiction (of “lizard people,” a popular prophecy with multiple believers, possibly stemming from a rural American spiritual sect in the late eighties) forming a slow but sure condition of memory loss. With the seamless blending of stories in nonlinear progression, O’Connell colors our vision in a painterly stroke, where victims and perpetrators become one. The psychedelically lit room, awash in a purple haze, further disorients us as we reach the end of the sermon. A flute song by the troll prompts the viewer to take a moment to reflect on the audience in front of the monitor: an assemblage of cast-wax candles in the form of awry troll bodies. Here we appear to be at a church altar, watching the tips of misshapen troll heads burning in homage to the lost souls of the Age of Internet. 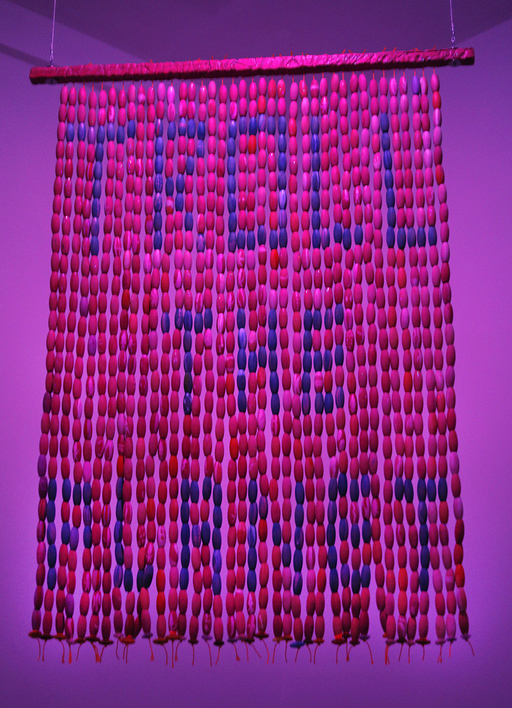 Molly Colleen O’Connell, Installation view of “Why Do Spiders Drink From My Mouth While I’m Sleeping?” at Julius Caesar, Spring 2018

Walking from the front room to the larger back space of the gallery, the influence of eighties pop and sixties psychedelics flood the oft-cold space. We are transported to the headquarters of the protagonists—the Trolls’ Den. A multicolored row of blue, red and green spots light the stage set for three looming figures, armed with sculpted flip phones, crusty laptops and endlessly snaking power strips. Approaching the sculptures, the viewer is met with grotesque troll faces preoccupied with their task at hand—to take over the world, one click at a time. Pools of green and black oil slick ooze across a paint-stained floor, with orange Cheeto missiles spread about meticulously. O’Connell deals with narratives in every way, sequencing sculptural objects in a mise-en-scène that aligns the work more with Situationism than Pop per se. By laying out the division of spaces, incorporating everyday ritual objects and a series of abstractions through light and material texture, O’Connell’s choreography of elements appear more lighthearted than what they stand for. The figures made of plaster and wax encase themselves in a wrinkled layer of skin with fine acrylic wig hair standing on end. Multicolored lights catch on a level of minute detail in a way that is simultaneously hypnotic and horrifying. While O’Connell continues to build on the fallacy of the unreliable narrator through her practice, this installation grabs, for a moment, the fun, banal moments of mass-internet culture while revealing a socio-political critique of colorfully lit faces in the crowd. “Why do spiders drink from my mouth while I’m sleeping?” is a show worth seeing if only to understand how the deformation of reality can produce tragicomic relief, allowing us to identify all that is unclassifiable, disgusting and absurd. (Pia Singh)

Molly Colleen O’Connell’s “Why Do Spiders Drink From My Mouth While I’m Sleeping?” shows through April 8 at Julius Caesar, 3311 West Carroll. A performance by the artist will take place on April 8 at 1pm in the gallery.