In the decades before his in 2016 death, Rick Bartow (Wiyot/Mad River) assembled an impressive body of paintings, drawings, prints and sculptures that treated subjects from several Native American mythologies as well as themes of abstraction and more recognizably western iconography. Although he’s acknowledged on the national scale, as a recent commission by the National Museum of the American Indian attests, Bartow has rarely rated the kind of critical attention accorded to peers like James Luna (Puyukitchum/Luiseño), Edgar Heap of Birds (Cheyenne/Arapaho), or Marie Watt (Seneca) whose work fits more obviously into the visual vocabulary of what passes for good contemporary art. Compared with Luna’s pointed performances, which tackled ideas about identity and discursive representation head-on, Bartow’s emotive, colorful paintings of animals look more like the critical reformulations of modern art au courant during the mid-century years. His reception has been more pronounced in the Pacific Northwest, where he is treated as a prominent regional artist and championed by local curators like the Hallie Ford Museum’s Rebecca Dobkins, and it’s little surprise that this retrospective, which encompasses most of his career, began life at the University of Oregon’s campus museum.

Encyclopedic with respect to medium and chronology, the show is the most definitive overview of Bartow’s career to date and, although it was assembled while the artist was alive, its Chicago stop feels like the final mark punctuating an extraordinarily productive career. His later art dominates, however, and given the exhibition’s import this critic would have preferred to see more of the artist’s early pieces from the eighties. The show makes a few things clear: despite his protean output, for example, Bartow maintained a fairly consistent aesthetic throughout. His works, old and new, draw on slightly surreal juxtaposed forms and a limited vocabulary of unorthodox painterly moves. These recur in his sculptures and prints, so that “After Van Gogh,” a deceptively simple sculpture of lead, wood, nails, copper, acrylic and crab claws, shares a host of formal similarities with “Raven in the Whirlwind,” a monoprint made over a decade later. Often interpreted as participating in a Native American tradition of transformation, whether of self, world or other, his works dilate on blurry, confused forms that variously overlap and blend. “From Nothing Coyote Creates Himself,” an important sculpture fashioned from metal and carved wood, shows an outstretched arm resolving into the leering face of a coyote, with a few studded pins descending down the wooden shaft in order to conceptually tether limb and mask.

You don’t have to squint to place Bartow’s work alongside other artists who have likewise used gestures of obfuscation to present the locus of myth and memory. The disturbing graphite drawing that gives the exhibition its name puts me in mind, like so many of his drypoint etchings, of Leonard Baskin’s powerful illustrations for Ted Hughes’ poetry. The suite “Ten Little Indians,” which gathers partially-realized drawings of Native figures, seems to decompose the tradition of ethnographic portraiture best exemplified by George Catlin. The violent application of pastel and paint, dissolving at times and clashing at others, often conjures glimpses of skulls, teeth, and feverish bodies in the mode of Bacon. Indeed, “Perseverance,” a later work, wouldn’t have looked out of place in his studio during the sixties, and I suspect that the triptych “PTSD I, II, III” owes something specific to Bacon’s own triptychs from this period. Fritz Scholder, who also claimed Bacon as an influence, is the major touchstone throughout. 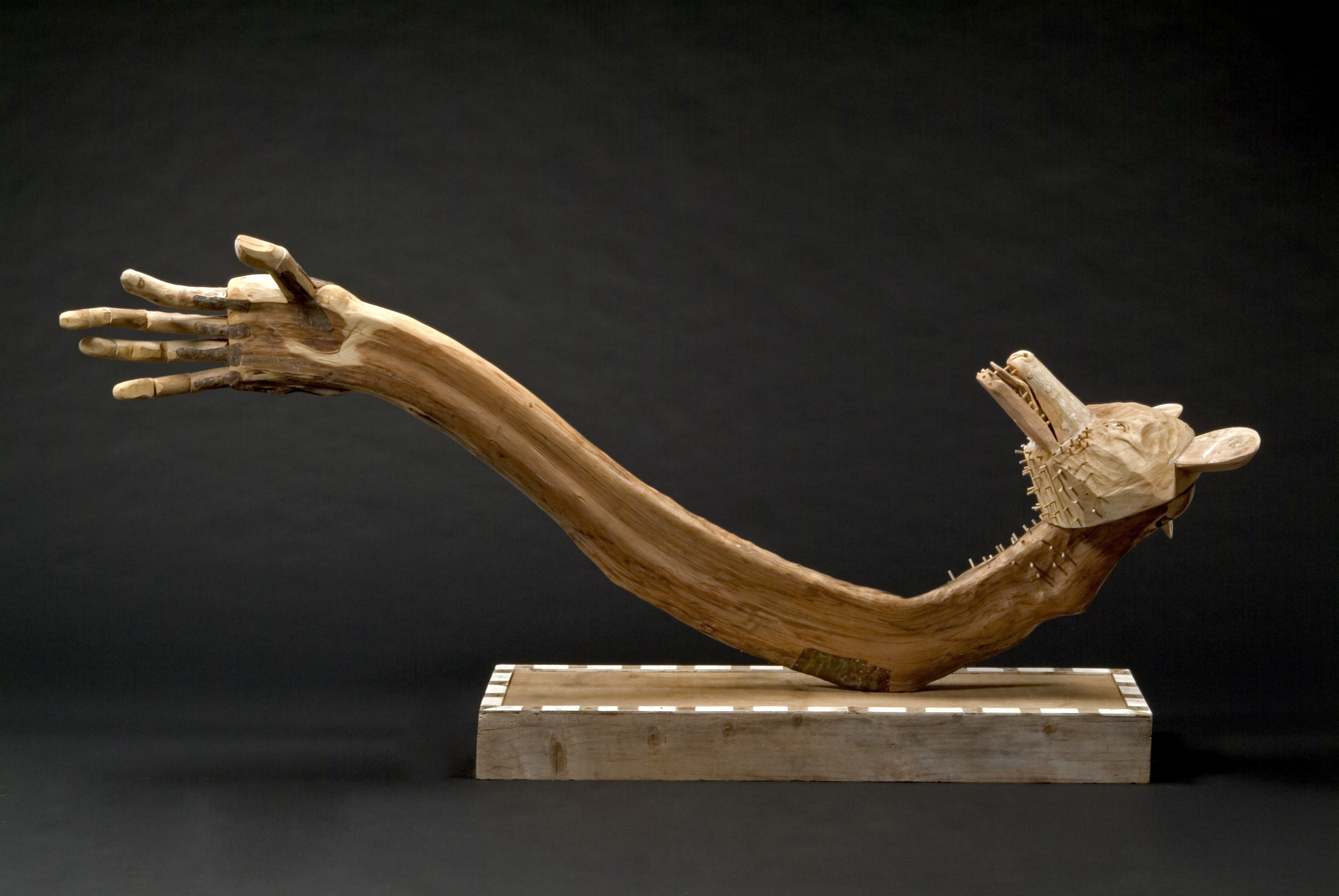 This brings me to what might be described as an impasse in the critical reception of Native art, which is one of the most understudied areas of contemporary art history, important recent monographs notwithstanding. Namely, how should critics understand and describe the concerns of Native American artists working in customary or hybrid modes? And, in a similar vein, how should critics narrate these concerns with respect to the long history of representation that has repeatedly figured Native subjects in manners designed not only to oppress but also to erase subjectivity per se? The particular challenge—the impasse—for non-Native critics like myself is how to evaluate artists like Bartow without rehearsing the problematic interpretative maneuvers of past scholars, without imposing conventional standards on their work or unduly reifying their Native identities and traditions. When Scholder arrived in Santa Fe in 1964 to take up a position as a painting instructor at the Institute of American Indian Arts, he declared that he “would not paint the Indian. The non-Indian had painted the subject as a noble savage and the Indian painter had been caught in a tourist-pleasing cliché.” He fashioned, instead, a critical pop sensibility then started portraying traumatic scenes from Native history—see his “Massacre in America: Wounded Knee” (1972)—but it’s his portraits, with their vibrant, painterly surfaces and their pointedly anti-naturalistic proportions, that signpost Bartow’s art most clearly. To “paint the Indian” complexly remained a difficult mandate for both artists; this show is a welcome opportunity to consider Bartow’s sustained attempt to describe the rich inner and outer world of a Native artist living after Bacon and Scholder alike. (Luke A. Fidler)