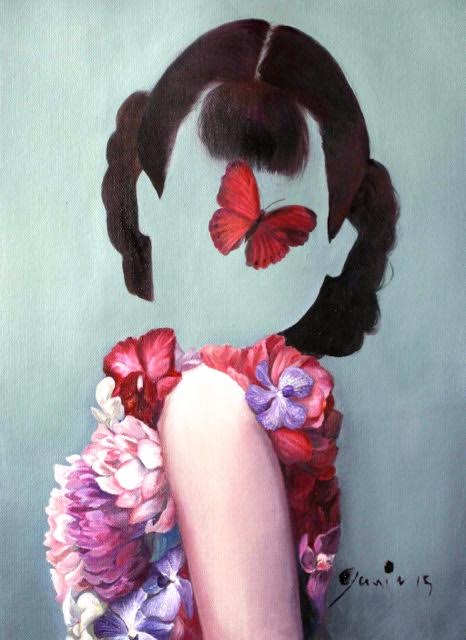 With only one or two pieces each from sixteen diverse painters, it’s difficult to think about each artist individually. As the title of the exhibit suggests, however, they may be taken together to represent something like an “Asian Perspective,” reflecting these transitional years in the history of Southeast Asia.

Maninder Krishnan’s portrait of “The Guidebook Seller” exemplifies the young nations that ring the southern and eastern edges of the South China Sea—Malaysia, Singapore, Indonesia and the Philippines. All four gained independence in the last seventy years. Like nineteenth-century American depictions of working teenagers, Krishnan’s street vendor appears young, smart, hopeful and determined to find a place for himself in a new economy. Who knows how much compassion and fairness, or any other values of historic cultures, will accompany his maturity? The same might be said about these nations, especially as they deal with the ethnic diversity of their populations. Most prominent among the minorities in Southeast Asia are the Chinese whose leadership in commerce has often drawn violent regional resentment. Two artists from the People’s Republic are included in this exhibit.

Krishnan, herself, exemplifies that entrepreneurial spirit, relocating to Singapore from Punjab, India, building a career as a “personal brand strategist and image consultant” at a high-end beauty salon. Like most self-taught painters who work from photographs, she does not create the illusion of three-dimensional form in space. However, she is quite sensitive to the expressive potential of the human face, as well as the qualities of paint and graphic design. Her work has the sincerity and impact now mostly found in outsider art. 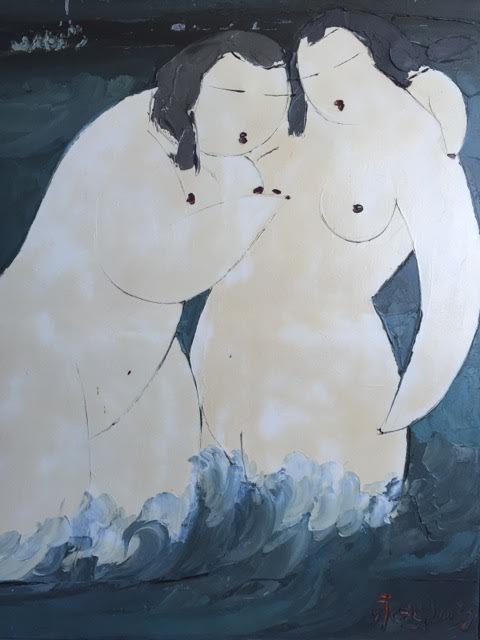 All six of the painters from Indonesia reflect a deeper, more ancient cultural background. With the cursive contours of medieval Persian masters as well as of Matisse, Muhammad Yunan paints a female figure that feels both Islamic and modern-secular. The other five painters all reflect the supernatural world of Wayang, the indigenous puppet theater. Each approach is psychological and distinctly different. Putu Sutawijaya conjures up the explosive presence of a mischievous demon. Wayan Paramartha depicts an elegant young man immersed in a blurry space haunted by ancient deities. Rudi Darma depicts fluffy white cocoons, the size of human bodies, wrapped up in red string and hanging from the branches of trees. Pretty weird, huh? But it does feel like an inventive depiction of spiritual helplessness.

Possibly as the consequence of Spanish colonialism and Roman Catholicism, Filipino painting has been more closely aligned with European picture making. All three of the Filipino painters in this exhibit practice a local variant of social realism. It’s not revolutionary like the Mexican or heroic like the Russians and the Chinese. Instead, it feels overcrowded, claustrophobic, and a bit nightmarish, even more than American paintings of urban life during the Great Depression. That might reflect a population that grew from seventeen million to over one-hundred million in the years since independence. Each painting seems to say “this is how we really live”—with equal portions of pride, despair and stale sweat. I salute their fortitude, but cannot stand to enter these visions.

The two Malaysian painters reflect a society that has been modernizing more quickly, perhaps too much so. The paintings of Janiz Chan slickly combine high-chroma flowers with human bodies, but for some reason, we never meet a human face. When the human head is the center of attention, the facial features disappear, replaced by a generic butterfly. Michael Tan depicts four figures gossiping at a waterhole. They resemble full-bodied women, but they’re more like calico dolls in a gift shop. Where is the humanity here? It’s been masked by that strong, chemical air freshener that’s used in shopping malls.

Considering China’s proximity and economic growth, it’s likely that its importance will soon surpass that of Europe and America in the lands around the China Sea. So it makes sense to include the work of Chinese nationals in this show as well. The work of the two featured artists feels too slick and decorative to be very interesting. Nothing is at stake beyond casual amusement. But as it is with the art local to Chicago, the best work doesn’t always make its way into galleries. (Chris Miller)