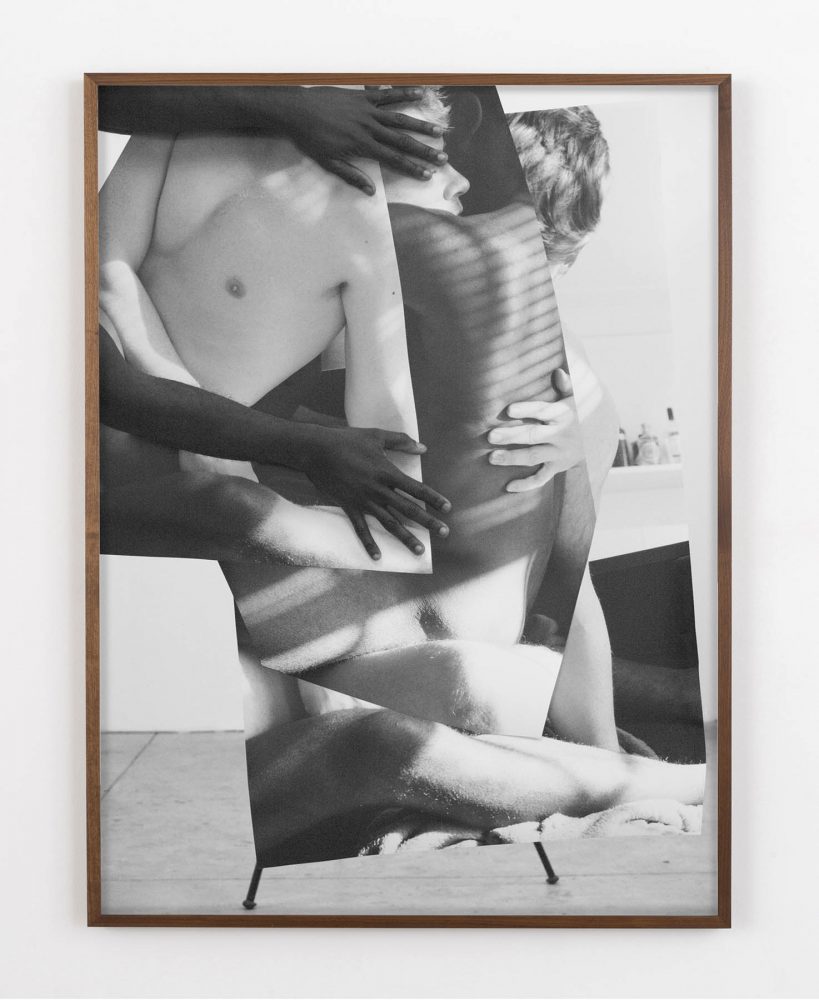 Paul Mpagi Sepuya’s photography, books and installations reveal an artist deeply invested in the ways we construct identity. Working within the history and discursive space of portraiture, Sepuya visualizes queer intimacies, uses photographic equipment as signifiers and the space and function of the studio to ask questions about who we are and what makes it so.  In “Dark Room,” his latest exhibition at Document, selections from his “Mirror Studies,” “Exposures” and “Dark Room” series create a through line between Sepuya’s previous and current ways of exploring these concerns aesthetically. Tangled limbs and bodies in states of concealment, embrace or touch are sometimes hidden by enlarged prints of other photographs or draped velvet fabric. The disjointed compositions echo collage and the cut-up sensibility of ‘zines while they are nonetheless steeped in the familiar traditions of painting and portraiture.

As an undergraduate at New York University, Sepuya developed an interest in traditional portraiture—straight-ahead compositions replete with posed figures, symbolic objects and fabric backdrops to elucidate the social status and character of the sitter. But he quickly became consumed with discovering other ways to capture the essence of his subjects. Sepuya’s photographs continued to feature members of his social and intellectual community and the objects that define them, but space to create his compositions became increasingly difficult to come by in rapidly-gentrifying  Brooklyn where he was based. Sepuya eventually turned his apartment—particularly the bedroom—into a workspace. The friends, lovers and dear ones who sat for Sepuya in his studio-home were photographed lounging on the bed, framed by rumpled piles of clothing on the floor, near his books and other photos spread out for editing as well as the detritus of daily living. This blending of the public and private transformed the way he worked and shifted his creative output. 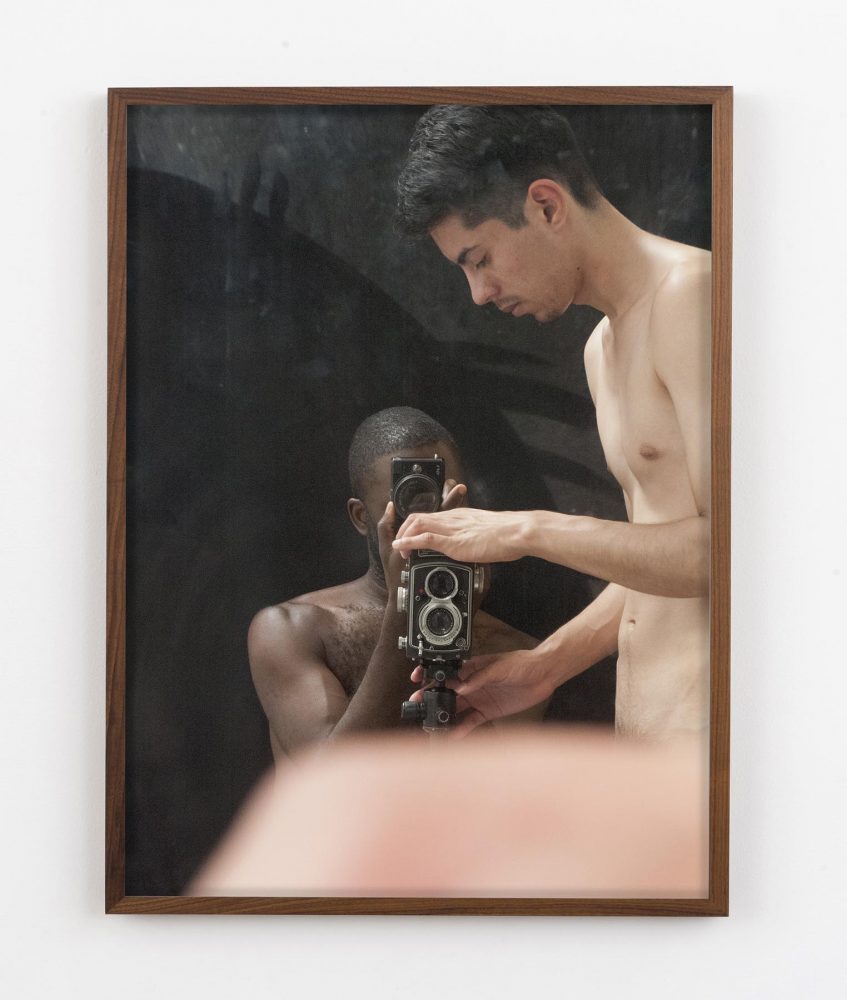 Sepuya left Brooklyn for the sunnier skies of Los Angeles in 2014 to pursue an MFA. Back then, as was the case in 1982 when the punk band Missing Persons first sang “Nobody Walks in L.A.,” chance encounters with friends, celebrities and strangers on the street—so common in New York—were less frequent. The city’s large and sprawling geography necessitate that Angelenos navigate the city in more socially isolating ways. Moving back into a dedicated studio allowed Sepuya to think about how that space might function once again. His new work began to explore the idea of visualizing the studio as a social space, this time more akin to the notion of home. The images presented in “Dark Room” continue in this vein, with Sepuya using the illusion of intimacy and familiarity as the backdrop to production.

While Sepuya’s visual compositions evoke the personal, he intentionally does not set out to create narratives, biographical or otherwise. The access he provides viewers through his scenes inevitably, however, implies that he might. Traversing the gallery might encourage a viewer to inquire about the relationship of the photographer to his subjects: Who is “Joe” in “Mirror Study for Joe (_2010980),” 2017, and what is he to Sepuya? In the photograph, their bodies are mostly obscured by an enlarged print that has been folded and affixed to a camera tripod like a makeshift billboard, Sepuya’s umber hand resting lightly on Joe’s beige one. Discerning relationships is similarly unclear in “Figures (_2020784),” 2017. Sepuya’s hands hold black-and-white photo prints that show two figures embracing from various perspectives. The disorienting scene reads like an image in a broken mirror and is so tightly framed that determining where the image Sepuya holds ends and where the actual studio space begins is difficult, yet riveting. 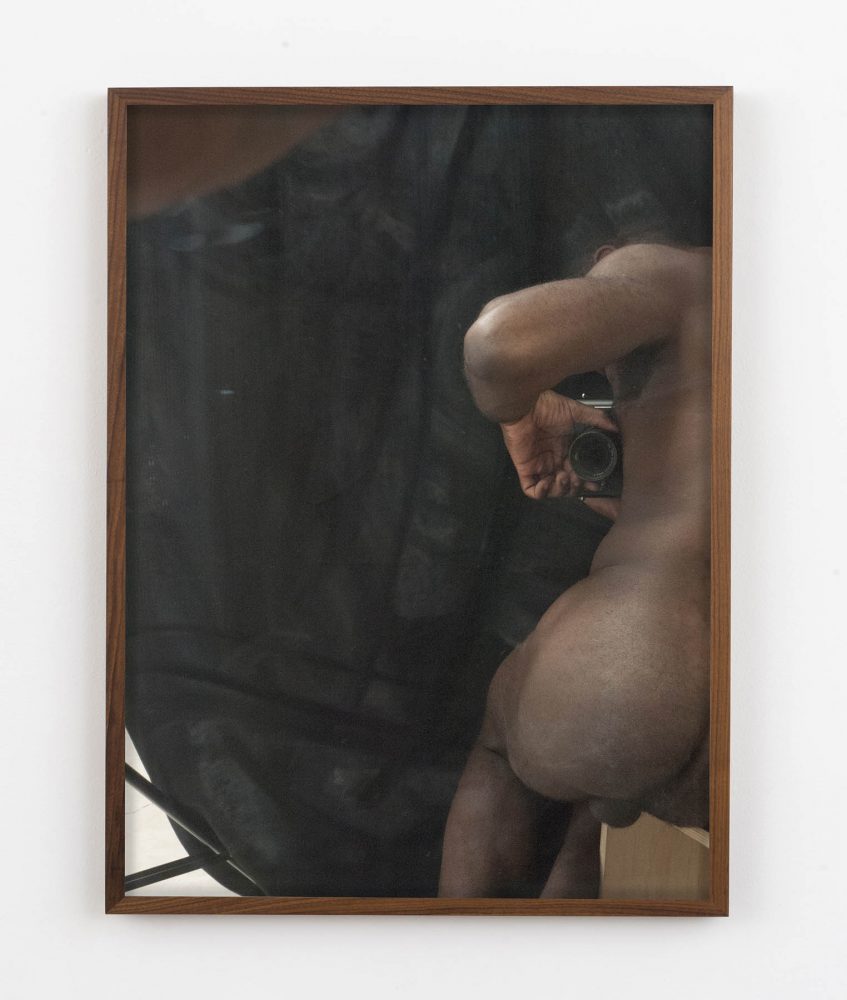 Photography has come to be seen as a powerful, democratizing technology, providing the average person with an opportunity to shape art and visual culture in unprecedented ways. At its inception, photographs were seen as faithful mechanical representations of reality, more so than painting, but eventually, the world has learned to understand that this is not the case. A photograph is not an objective picture of the world, but rather a curated view. The one who holds the camera chooses where to point it, what to include or exclude, and how to frame and present the resulting image. Sepuya artfully acknowledges this by creating work that concedes the experiences, complexities and relationships that drive what we create and how we see. He knows all photographs carry traces of time—what came before and what’s coming after. He understands that identity is embedded in every image captured, and through his images, Sepuya invites us to look for clues with him to discover the complexities that might otherwise be left in the dark.