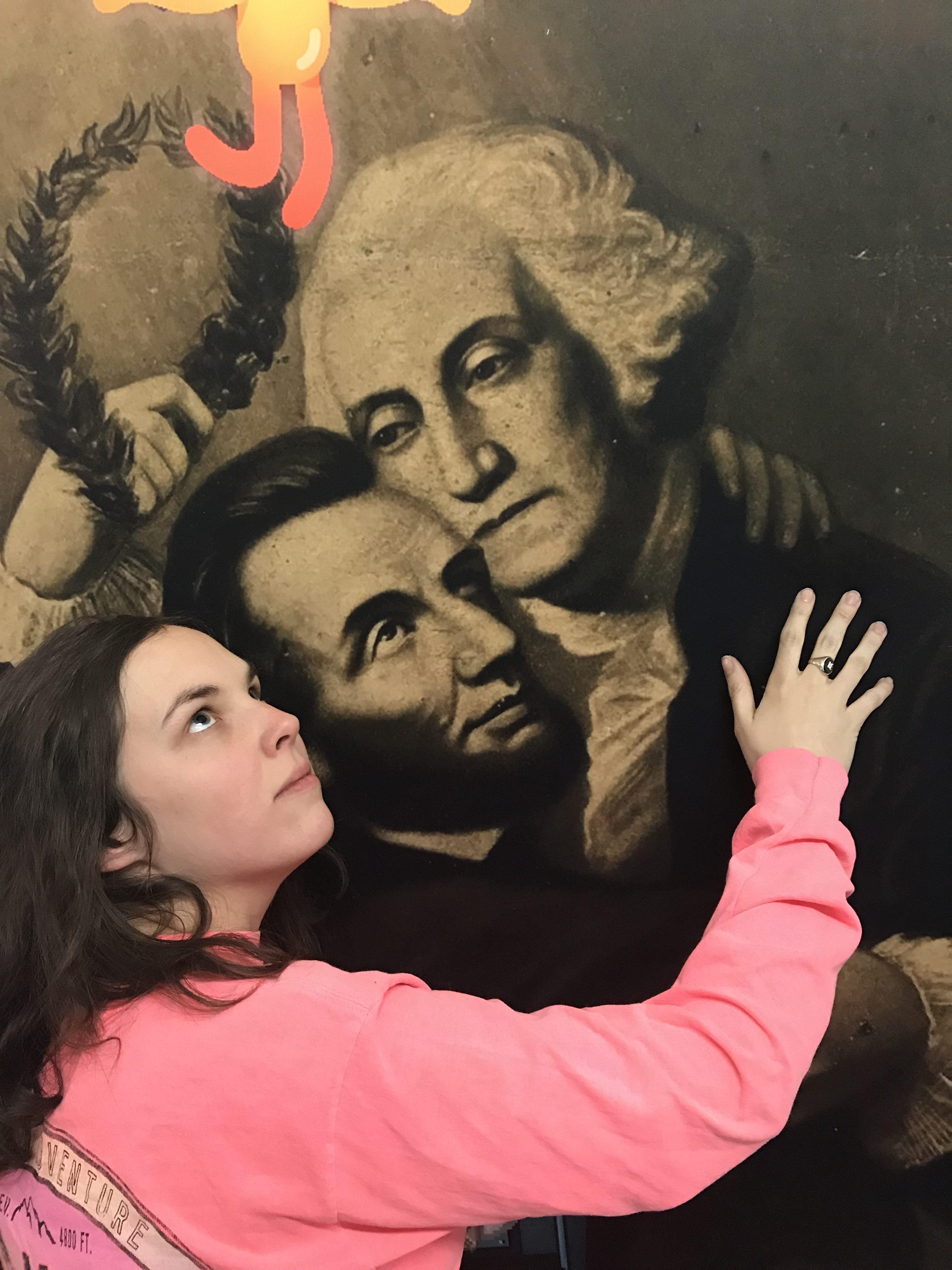 “WHATEVER FOREVER” reads dripping, “Goosebumps”-style purple text overlaid in the center of a canvas printed with a pixelated Pikachu, a picture of a gray cat lying on a computer keyboard and enigmatic red-dyed shapes that suggest a phallic form around the star of the Pokemon franchise. Another cartoon creature, Jim Benton’s Happy Bunny, appears over the title text carrying its own declaration, “whatever, you moron,” in a faded serif font. 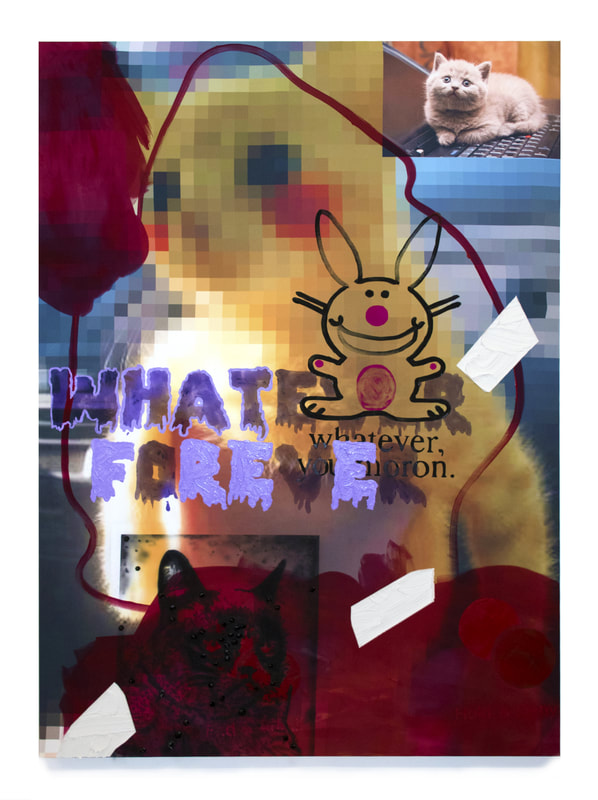 For those who did not come of age in the late 1990s and early 2000s, Erin Hayden’s carefully crafted cultural references might read as the uncouth stylings of a disaffected teenager. In fact, the surfaces of her paintings accrue rich and friction-filled layers of earnestness and irony with found images, inexplicable textures, digital glitch-core and luscious strokes of thick acrylic paint. What sets Hayden apart from many young painters is her willingness—even eagerness—to embrace the ubiquity of digital imagery and its overbearing presence in our quotidian experience, all without giving up the primacy of paint in the process. Employing digital manipulation and analog gestures in open contest for space and attention, Hayden paints for a tomorrow that has yet to come and a yesterday that we are just now beginning to understand.

Digital stock photos—many oversaturated, overdetermined, and downright tacky—served as the basis for a series of works shown late last year at Randy Alexander Gallery. These large-scale paintings combined digital-desktop images with thick, impasto paint strokes whose errant appearances belied the precision of form and placement. In other works, exuberant and bizarre phrases like “LET’S CELEBRATE” and “DREAMS COME TRUE” stood over a Caribbean beach backdrop and a digital collage of Coke cans. Ed Ruscha would be a fitting comparison for Hayden’s tendency to juxtapose grandiose and meaningless claims atop idealized images of nature, but a better precedent for Hayden’s breakthroughs would be Laura Owens, whose recent Whitney retrospective covered two decades of her increasingly colorful and digitally influenced painting. At last year’s Terrain Biennale in Oak Park, Hayden exhibited a massive, sheer scrim printed with images of rainbow-colored kittens, the kind of thing your grandmother might forward to you from a chain email. The picture was obviously mirrored to make eight cats from the photo’s original four, and a cursive text read “dream on” beneath the felines. Squiggles and pink hearts adorned the screen, as if a child had grabbed the tablet and doodled over her favorite kittens. 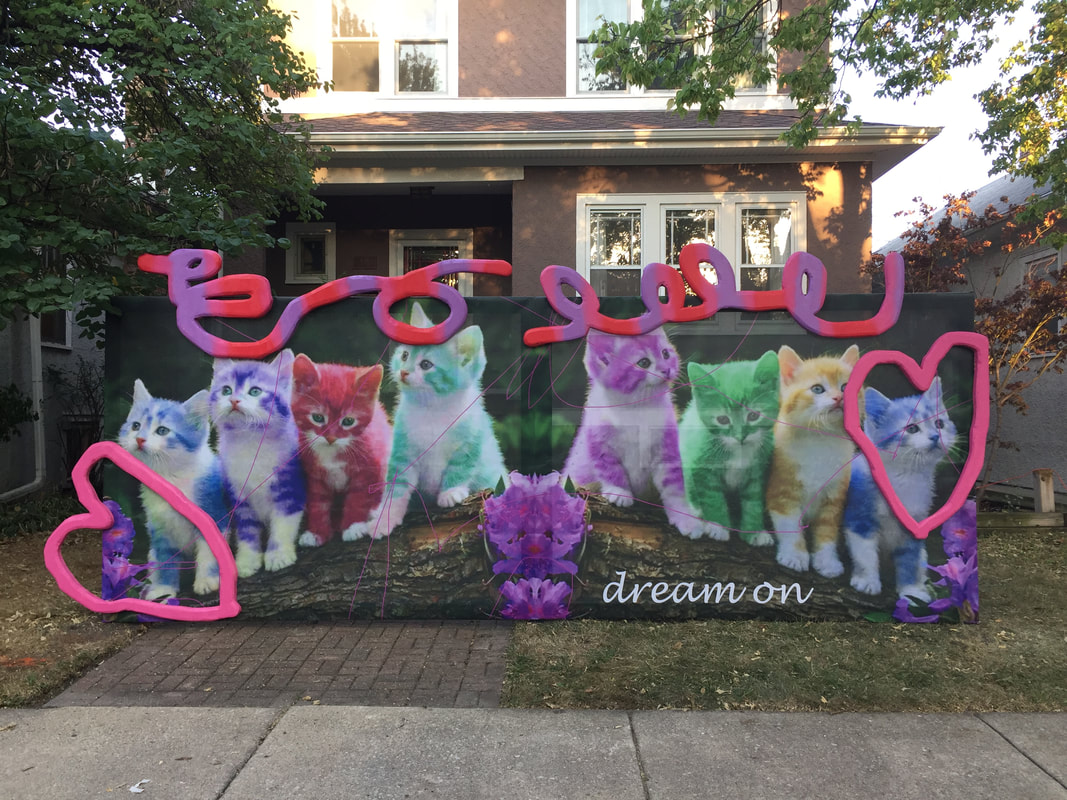 Hayden is in Miami, on a residency at Mana Contemporary’s Florida outpost. She’s been traveling the past two years since graduating with her MFA from Northwestern University in 2016, taking up residencies at the Banff Centre for Arts and Creativity in Banff, Alberta; an Ragdale artist residency in Lake Forest; and another at the Civic Gallery of Modern and Contemporary Art in Turin. Hayden was also recognized with the prestigious Luminarts Visual Arts Fellowship at the Union League Club of Chicago in 2017.

Hayden has also racked up an impressive roster of solo and group exhibitions since 2016. At the now-demolished DEMO Project in Springfield, she installed <3Xoxo<3″ on the outside of the covered porch, an array of acrylic and foam sculptures in the shapes of kiddie-drawn hearts and hugs and kisses, In February, she closed a solo exhibition, “Hold Me” at University of Illinois Springfield Visual Arts Gallery. This summer, she’ll be included in the exhibition “I Was Raised On The Internet” at the Museum of Contemporary Art Chicago. This show may finally place her work within the recent art history that sees the internet and digital images for what they really are—just one more source in an ever-expanding universe of images and forms. (Elliot Reichert)