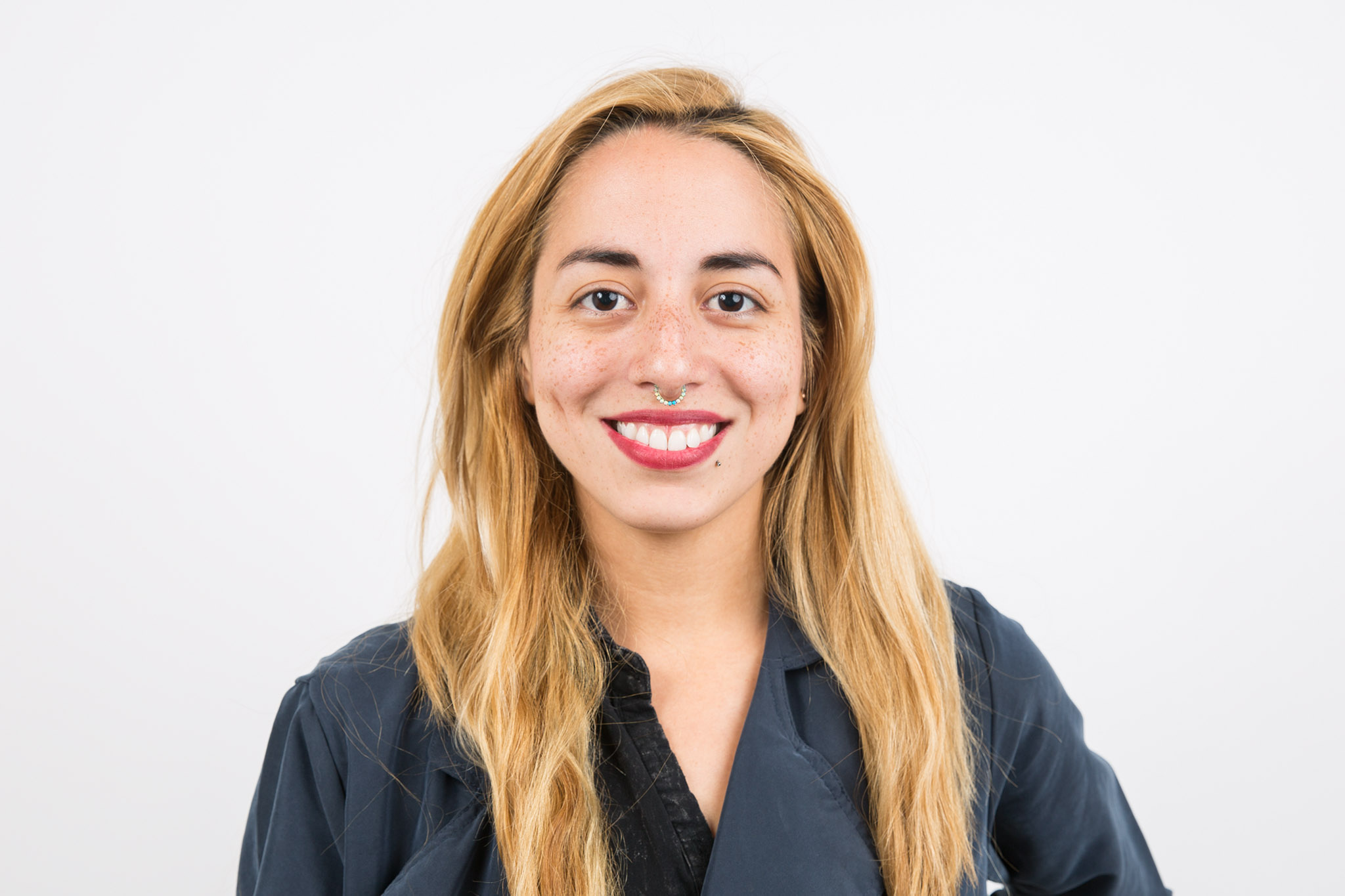 The astoundingly prolific Melissa Leandro has four studios between which she divides her time. The one I visited, at the Chicago Artists Coalition where Leandro is a BOLT resident, is wonderfully chaotic, filled equally with source material and finished works. Alongside beachy kitsch-like dollar-store fruits and patterned tablecloths are sewing machines, looms and embroidery hoops. Stacks and rolls of textiles, created or commissioned by Leandro, who does not use found fabric, fill and warm the space. Her studio also contains personal effects, including plaster sculptures made and mailed to her by her father using the detritus from his job as a construction worker. This postal dialogue serves as inspiration for newer sculptural works, which Leandro calls an “unauthorized collaboration.” 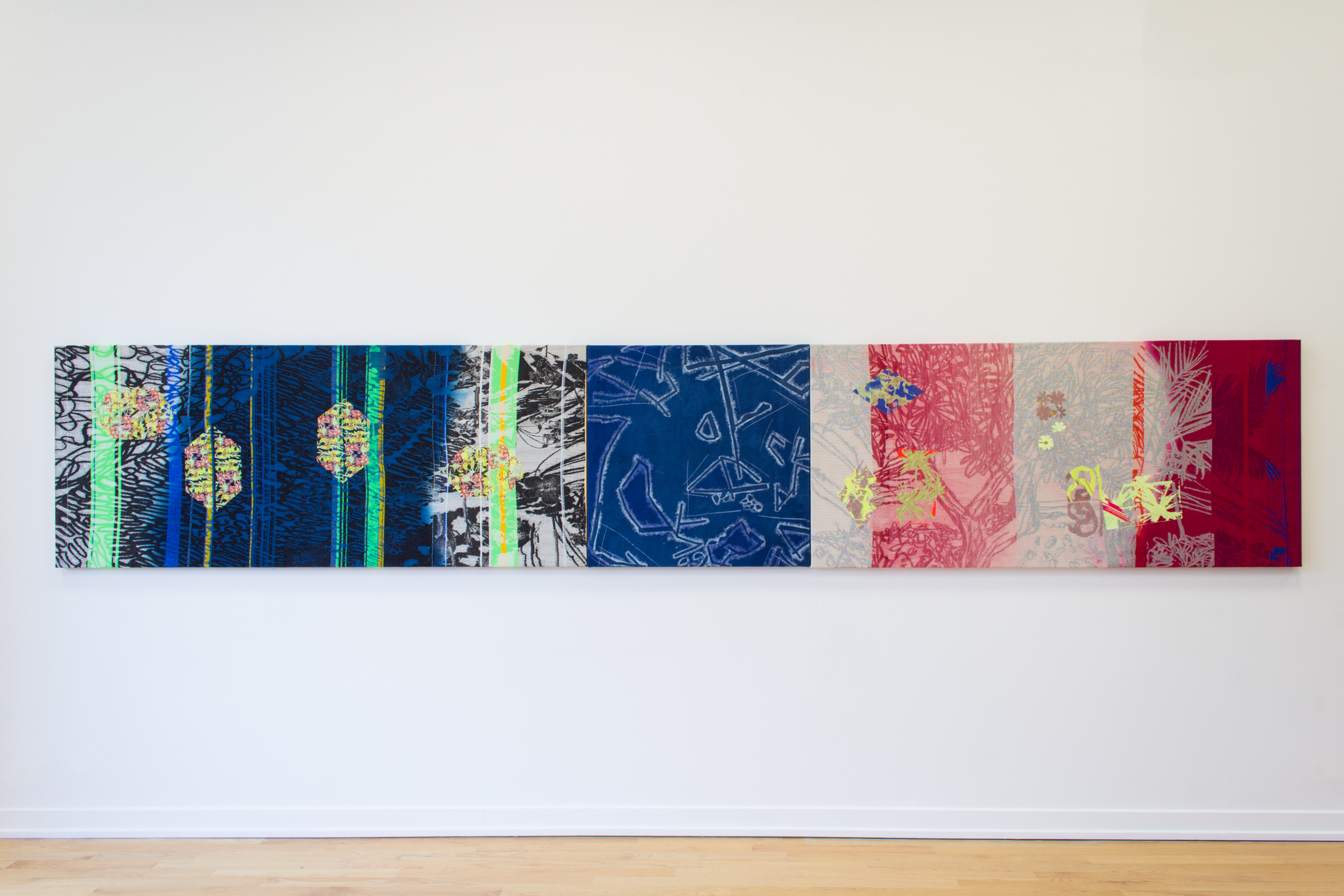 Her large-scale textiles start as small sketches and cyanotypes made using tiny domestic or natural objects collected during family travels, the “sun prints” functioning as both diary and atlas. Leandro works with her parents and sister composing assemblages atop blue photographic paper, the development of which is stopped easily by water. This method allows Leandro to quickly and intuitively create patterns that are later realized into exhaustively labored textiles that are meticulously woven on a jacquard loom and further embellished with digital embroidery. The heavily machined, brilliantly colored surfaces are further adorned, distressed and deconstructed via gestural embroidery both analogue and digital, quilting, dye and wax techniques. “I tend to produce, produce and produce work, often in a frenzy, often factory-like concentration on stitching zig-zag lines or weaving row after row of weft yarns until I am slowed by the act of dyeing or mending my materials,” Leandro says. “There is a destructive act to my modes of studio production and labor, because I will build up a surface through weaving and embroidering (additive gestures), and then cut, tear, bleach directly after (subtractive).” The labor that goes into their construction is apparent and powerful, but also belies a sense of disconnection and attempted suturing. 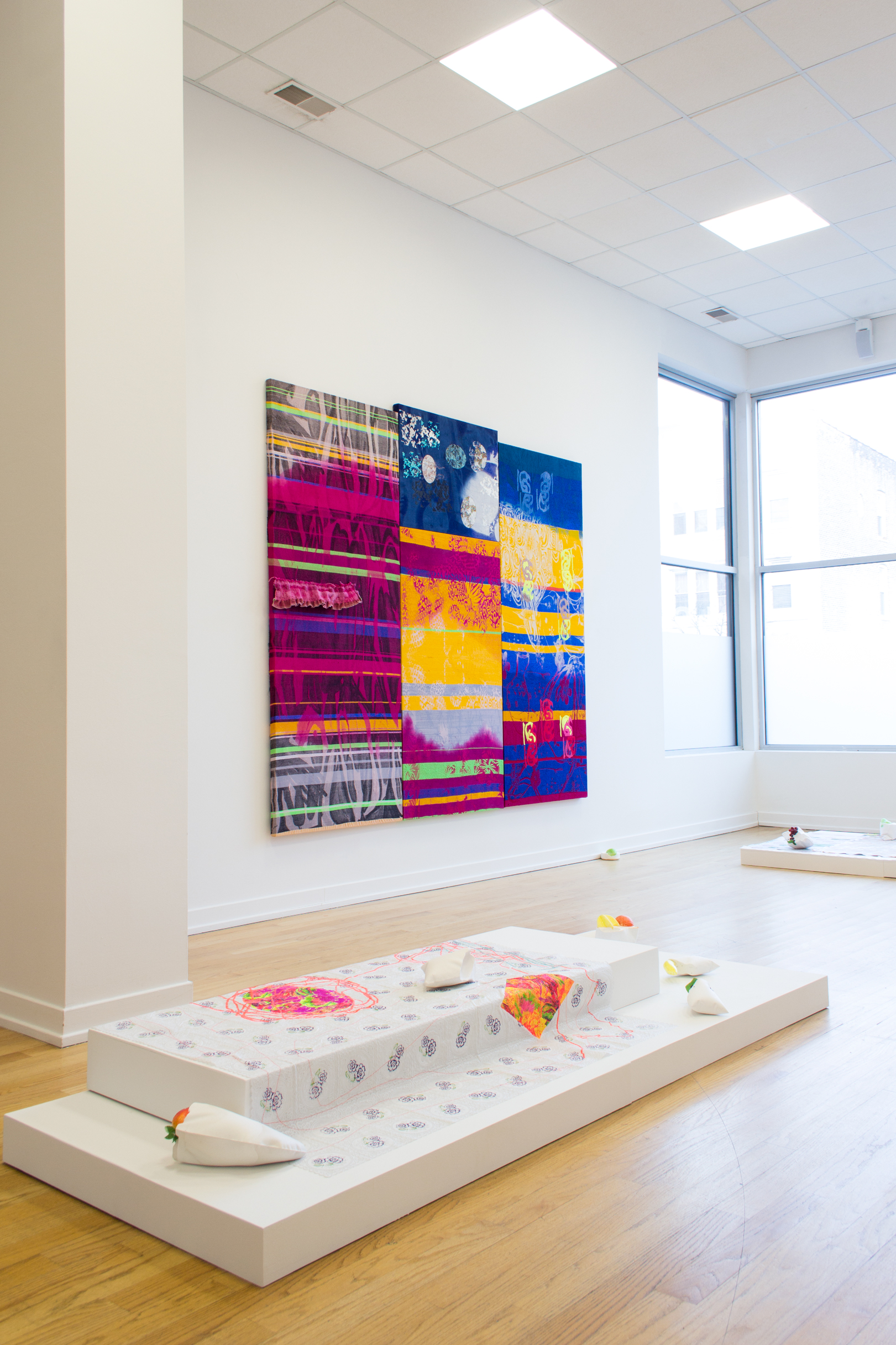 Her stunning, sunny solo show “Trop-i-cal” at Efrain Lopez Gallery featured densely populated, wall-mounted fabric panels evoking nautical or natural locations, with striking horizon lines and orbs that glow like planets. This work, while rejoicing in all that is lush and excessive, also deals with voids, loss and emptiness. Cyanotypes, the anti-photo, serve as draft compositions. Tautly stretched textiles function as anti-flags for composite countries. A surreal anti-table titled “La mesa de mi tía, my aunts table” sits all too close to the ground, covered with a psychedelic tablecloth-collage scattered with inaccessible fruits partially encased in plaster tubes inspired by the vernacular sculptures made by her father. The show is a meditation on their strained relationship, exacerbated recently by his alcohol-related health problems. It’s also an exploration and celebration of Leandro’s own layered cultural identity and family history. As a first-generation American growing up in Miami, she bore witness to the trauma of her immigrant parents disconnecting from their native Costa Rican heritage and language. “Lo que me perdí,” which translates to “what I lost,” pays homage to the majority of her family which still lives in Costa Rica. The unfamiliar trifurcation of the show’s title, “Trop-i-cal,” forces you to sound it out and sit with the discomfort of being a non-native speaker, no matter your mother tongue. This body of work is a complex visual collage of Leandro’s personal mythologies and an attempt to heal the rift she feels between her family heritage and present life in Chicago.

Leandro earned a BFA in 2012 and an MFA in 2017 from the School of the Art Institute of Chicago. She is currently a Luminarts fellow and the assistant director of facilities of the Fiber Material Studies department at SAIC. She will have work in the group show “Expansive Threads” at Latino Arts, Inc., Milwaukee, curated by Edra Soto, and will have a solo exhibition at the Chicago Artists Coalition’s new space in December 2018. (Erin Toale)