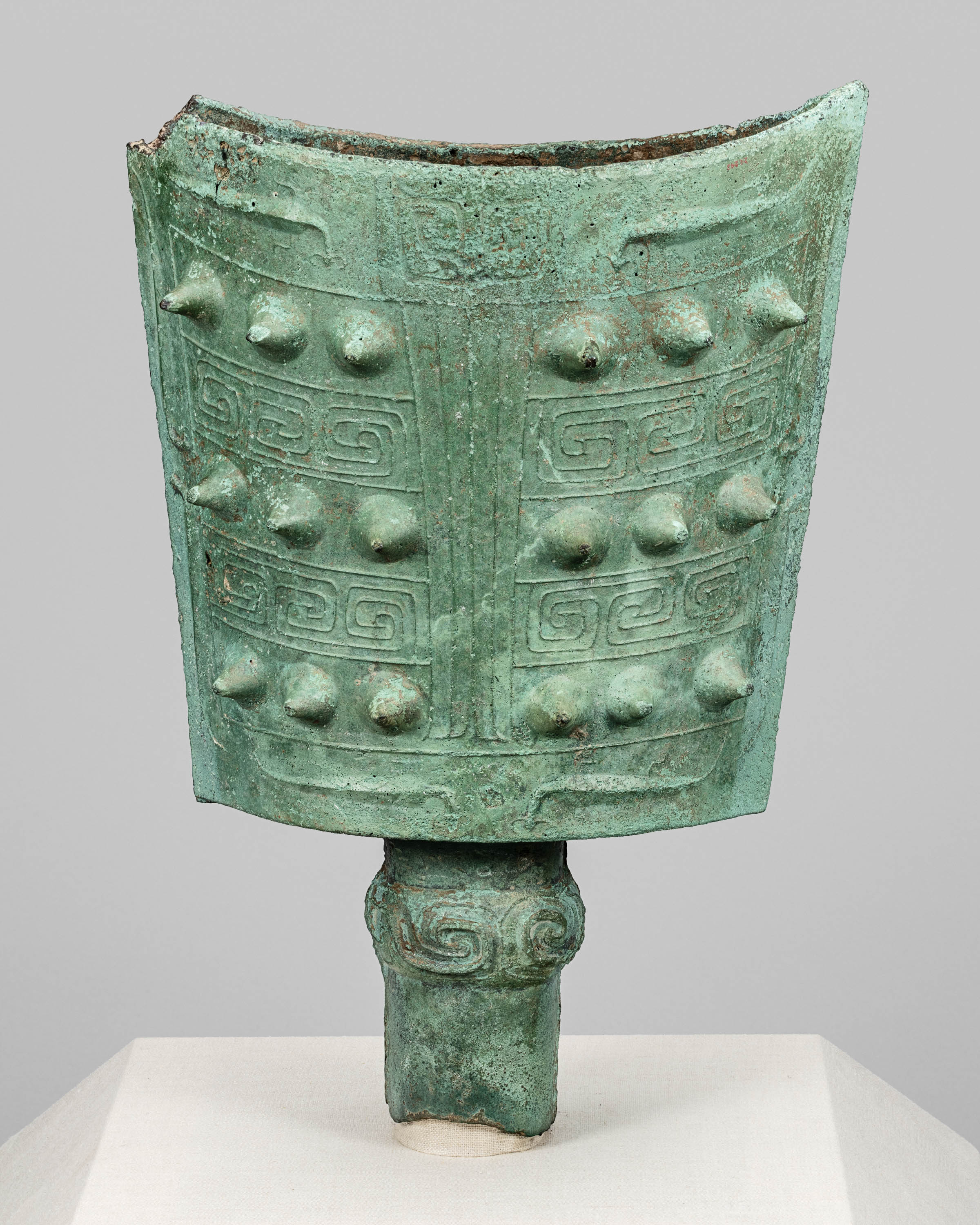 This extensive exhibit of ancient Chinese bronzes can be as frustrating—and occasionally exciting—as a flea market. Since the focus is on how the pieces have been collected, the display has not been consistently organized by chronology, genre or location. Nor, apparently, have the pieces been chosen for aesthetic value. If you’d like to spend about twenty minutes viewing some of the best examples of ancient Chinese bronze, you should probably visit the museum’s permanent collection. My favorite is a pair of Shang Dynasty wine containers entwined with horned serpents.

If you have more time and curiosity, however, you might start by viewing the video that demonstrates the ritual use of ancient vessels and then inspect a complete altar set encased nearby. That might give some idea of how these formidable objects were originally displayed and used in ritual observance of the ancestors.

Many other kinds of bronze objects are on display, including knives, bells and some very cute animals. The primary focus of this exhibit, however, is how the Qing dynasty related to this legacy—especially that amazing statesman, warrior and calligrapher, the Qianlong Emperor (1711-1799). The prosperity, power and extent of his empire would not be equaled by Chinese leaders for nearly two centuries, so it’s not surprising that museums in the People’s Republic have cooperated to make this the third Qianlong-focused exhibit to visit our area in the past decade. And he loved to collect art, especially ancient Chinese bronzes. 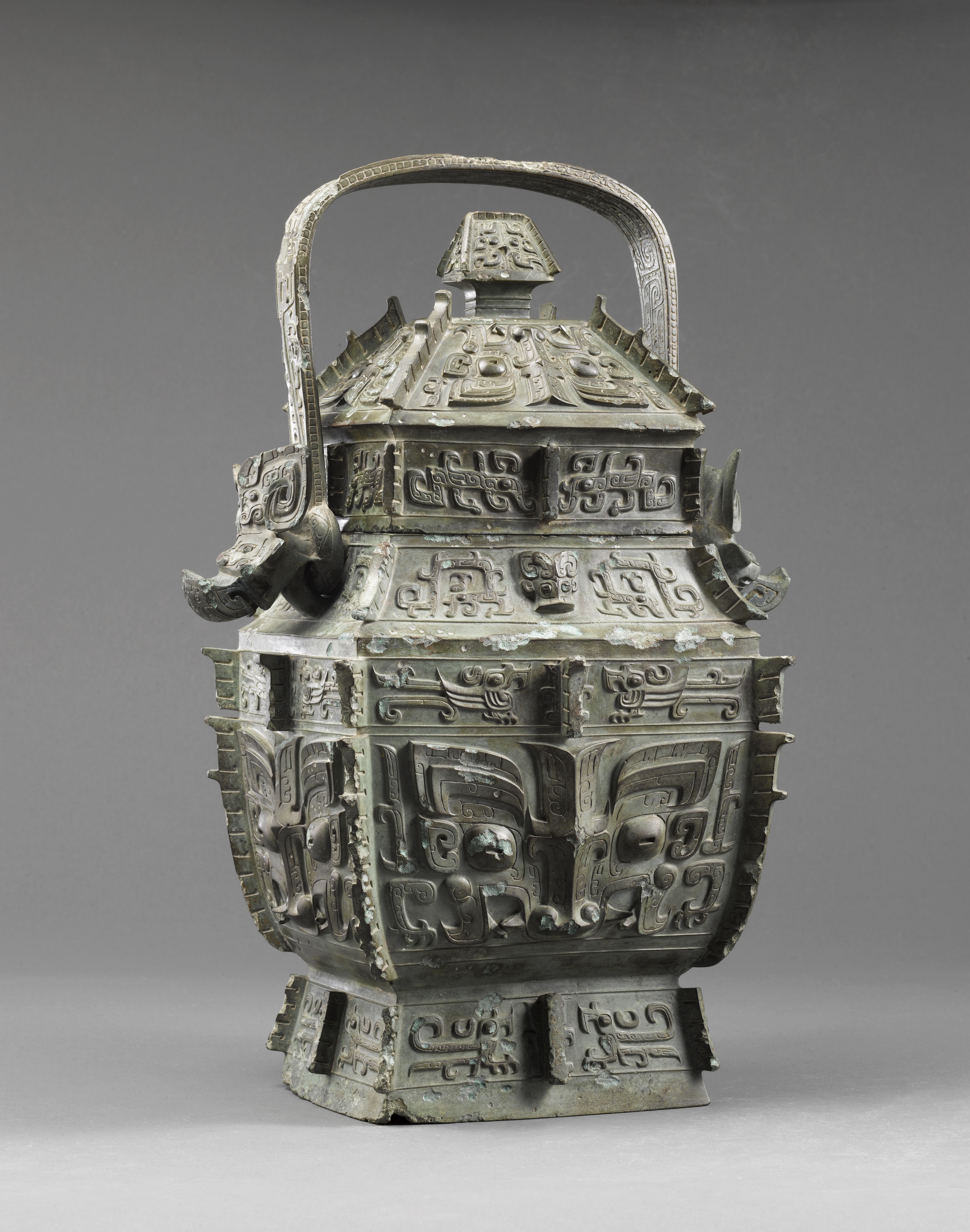 Possibly his primary consideration in collecting was the proof and legitimacy of his power. When he collected paintings, he stamped them with his unmistakable chop—much larger than anyone else’s. And when he collected ancient ritual bronzes, he commissioned scholars to record them in illustrated catalogs. Bronze technology dates back about four thousand years while ceramic vessels with similar shapes go back even further and may have served a similar function: to connect a family across generations, and incidentally validate its claim to land ownership. During the first million years of human habitation in east Asia, no such claim was possible; no such art was necessary.

Many pieces made in the eighteenth and seventeenth centuries imitated the shapes of ancient bronzes, and this exhibit offers a large and diverse selection, sometimes displayed next to their ancient prototypes. Though elegant and well crafted, the primal, earthy power is usually missing. Also displayed are paintings that show the ancient pieces being handled by Qing collectors. Of these, the most fascinating is a depiction of the Qianlong emperor himself, complete with a revealing personal inscription. It’s a historical treasure that may never leave the Forbidden City again. 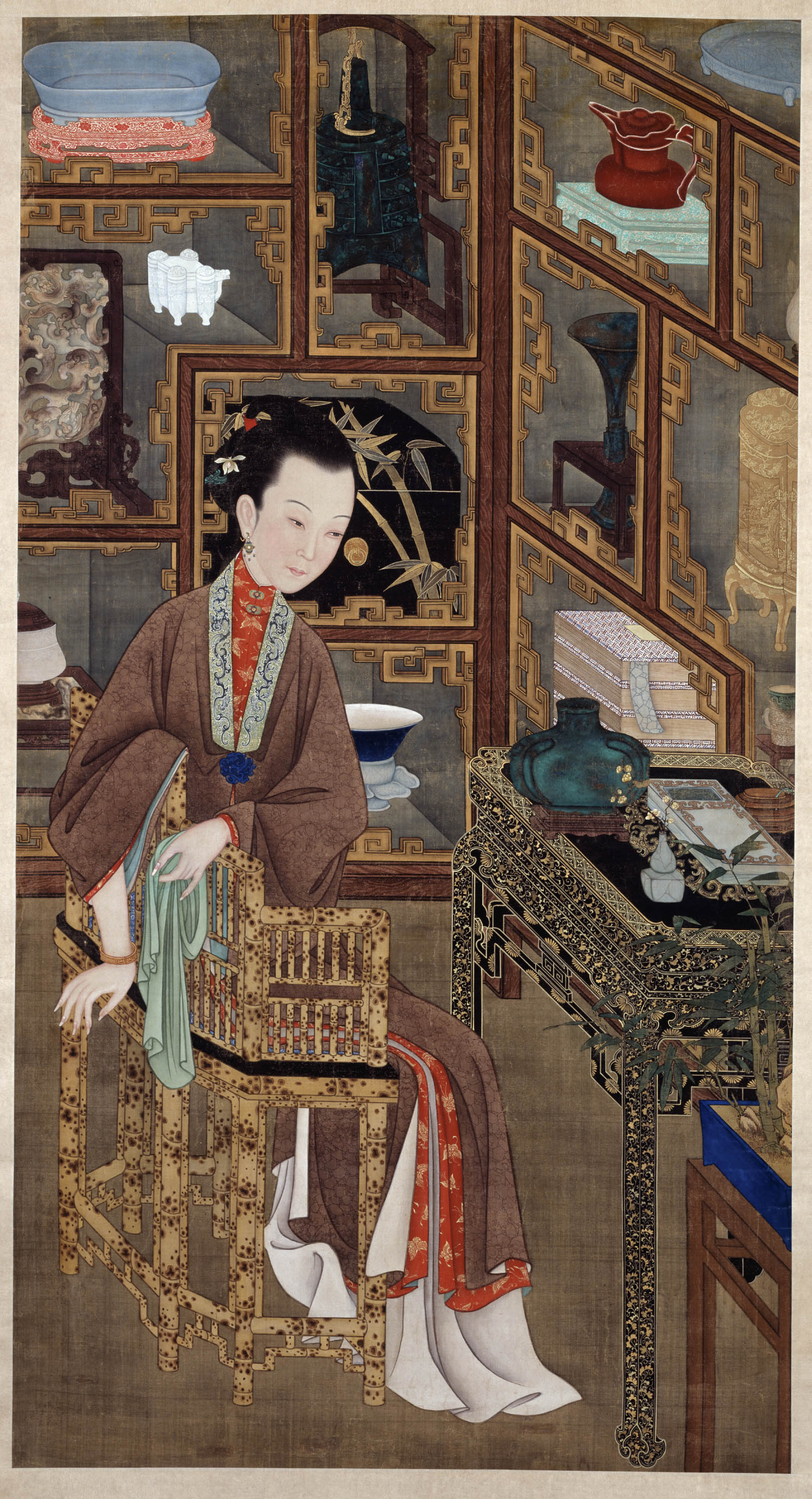 Chinese artists and scholars are still interacting with ancient bronzes. In one instance the original “Bucket of Minister Xi” is displayed near an over-sized view of it painted about three thousand years later. Tai Xiangzhou (b. 1968) may not have captured the inner dynamic of the bronze, but it’s a precise and respectful rendition that seems to tower above the viewer like mountains in a Sung Dynasty landscape. The other two living Chinese artists are more concerned with making contemporary conceptual art. Just as with the Qing-era tributes, there is a clinical dryness about all three that is more admirable than enjoyable. They make me appreciate the vitality of the ancient pieces even more, which feel more than a little scary, perhaps intentionally so. Inevitably violence would eventually challenge or defend those ancestral legacies that these vessels once served to validate. (Chris Miller)

“Mirroring China’s Past: Emperors and Their Bronzes” shows through May 13 at the Art Institute of Chicago, 111 South Michigan.